Portland, Oregon:  First - BIG ANNOUNCEMENT! It poured rain at our house last night for over an hour. First rain since June. JUNE! (This is Oregon, people, Oregon.) The Eagle Creek Fire is maintaining at 33,000 acres and the Coast Guard re-opened the Columbia River tonight. Yes, the Columbia River has been closed for a week or so - who knew you could close a river?

Lenny and Dave spent the morning watching the Redskins v Eagles. Lenny grew up in DC, so Washington is his home team. The game did not have the outcome desired, but the boys had another day of testosterone-driven sports spectating.

Later in the day, the boys went out on errands and I helped Lisa edit a video for Leo's homework assignment: MY FAMILY. Can you even imagine having homework that included a film? I certainly can not. The entire thing was shot on Lisa's phone, text messaged to Lenny, forwarded to me, and finally edited on my laptop.

I am doing homework for a kindergartener.

How far I have slud.

The vegan cheese looked like shredded cheese, but it did not really melt like a natural cheese.

The first pizza (red sauce, red onion, red pepper, sliced black olive and Daiya vegan cheese shreds) looked fairly like a regular pizza. The taste and texture of the cheese was more like if someone had used shredded cream cheese on a pizza. Not pleasant, but not unpleasant.

Pizza #2 was just a simple Margarita - tomatoes, "cheese" and basil. 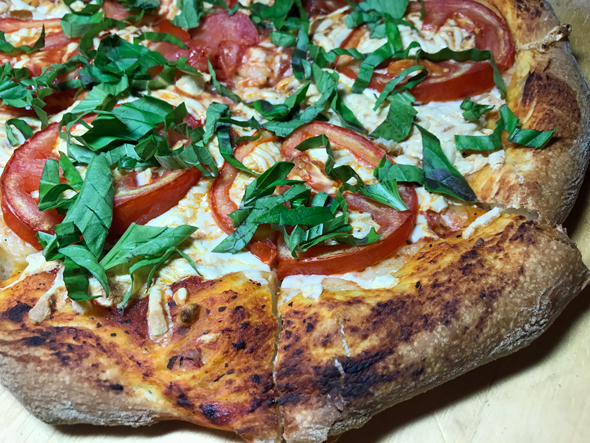 Again, it "looked" like pizza, but it was not pizza. Maybe my experiments with fake cheese are over? I have had so many good nut cheeses from Kite Hill. I could experiment more, but think I will just stick to plant-based real food instead of plant-based fake food. 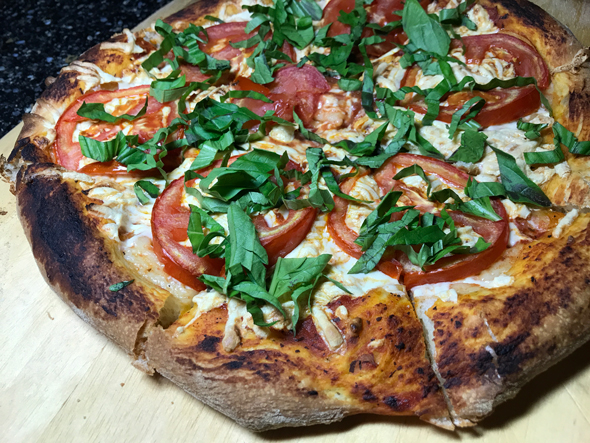 We had more than one entire pizza left over. Sadly, it all went in the trash. The accompanying salad (red lettuce, tomatoes, avocado in a light vinaigrette) was finished.

Next Sunday will be an experiment in veggie cheese-free flatbread.

Until my next update, I remain, your shredded correspondent.