Portland, Oregon:  Lenny and Dave left before 9 o'clock this morning, heading to Eugene for the Oregon v Nebraska game. Since his knee surgery was only one week ago, they decided to not mess with taking the motorhome, but opted for Dave's Tahoe instead. They tailgated with our posse, then headed to the seats and watched the Ducks win! 2-0 for the season with a new coach. Nice.

So, with the post-game traffic, they didn't get back to Taylor Manor until after 9p, and started texting me about an hour out that they would be home soon and that they were starving.

Of course, I was way ahead of them and had dinner ready to pop in the oven. 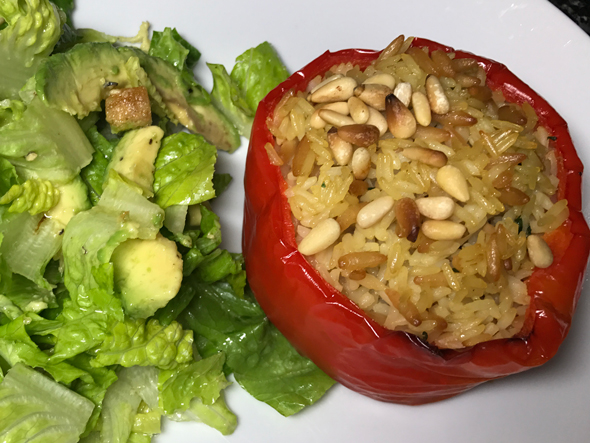 Not exactly sure what I was doing, after a little googling, opted to core three red peppers, place them upside-down on a baking sheet and roast them for 20 minutes in a hot oven. Then I added ten more minutes, then five more. They were huge peppers. After I removed them from the oven to cool, they kinda collapsed, but did not tear and were easy to fill later.

Following a suggestion from The Lovely Lisa, the peppers were stuffed with a Near East Rice Pilaf mix, original flavor, which is free of animal products. The mix was prepared according to the package directions and left to cool. I stirred-in a handful of minced parsley leaves (the pilaf was very beige), then stuffed the pilaf into the peppers. The entire box of pilaf mix just filled the three peppers. The three peppers were placed in an 8x8 baking dish - this size held them easily and the sides on the baking dish kept everything upright. No tilting pepper cups. I covered the peppers with foil and placed them in the fridge until the hungry text arrived; 45 minutes out.

I baked the stuffed peppers, covered, at 375° for twenty minutes or so, then removed the foil and sprinkled a few beige pine nuts to garnish the beige rice. The nut browned up after another ten minutes. Dinner was served. 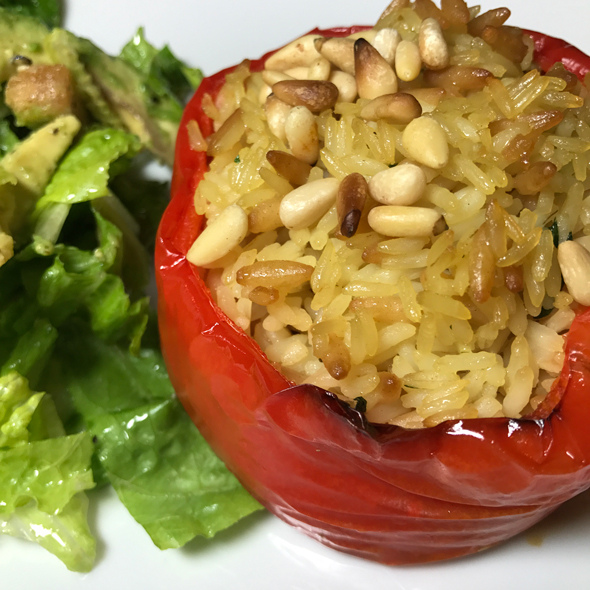 The salad to accompany was an egg-and-anchovy-and parmesan-free Caesar... romaine lettuce, avocado and croutons in a dressing made with garlic, lemon juice, olive oil, salt and pepper. Perfect light dinner, served to two tired men who went to bed the second the dishwasher started.

NOTE: I would never think to buy a rice pilaf mix. I would just make rice or make my own rice pilaf. Terry, it is okay to sometimes use a convenience. It was a tad salty, but the ingredients were only rice, orzo, salt, and dried yeast, onion, garlic and turmeric. The flavor could be bumped-up by using stock instead of water when preparing the mix, but make sure the stock is unsalted or low-sodium.

Until my next update, I remain, your stuffed correspondent.