Los Angeles, California: On our last day caring for our grandchildren (a sitter gets them Thursday and Friday), we spent the entire day at Universal Studios in Hollywood. Wow, was this a good idea. A great experience, everyone had a blast - and not even one melt-down. We arrived at 10a, and purchased tickets which allowed us to skip-the-line once at each ride. The Jurassic Park portion of the theme park was closed today, but we visited most every other area.

Universal Studios is quite manageable, size-wise, but we did rent a stroller ($15) to get our Kindergartener around easily - and also as a handy place to keep our "stuff" as we cruised around the park. There were many (really many, many) movie/TV characters situated around the park posing for (free!) photo opportunities. Leo was a bit picky, but Lucy would pose with any character, and she knew who whey were. (I always did not.) 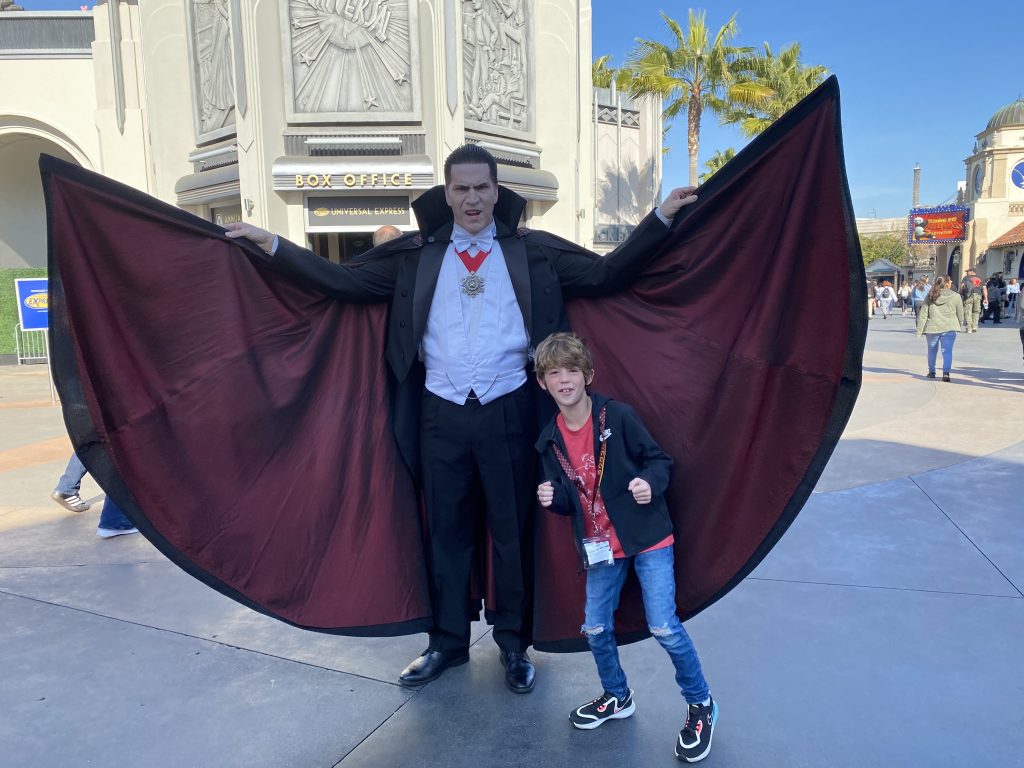 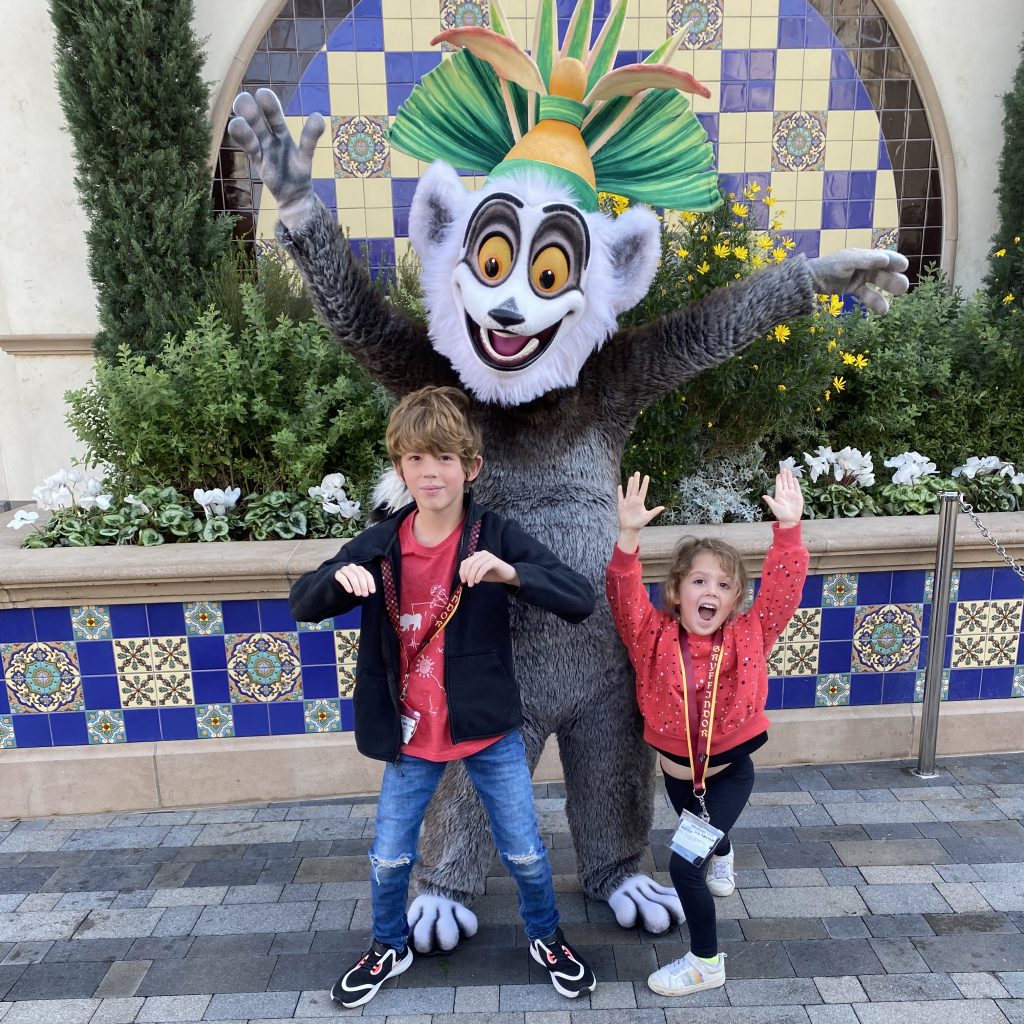 The first order of business was to visit the Harry Potter area of the park. Hogwarts School of Witchcraft and Wizardry is the prominent feature in the section, and the building is very impressive. (Leo has been binge-watching Harry Potter films.) 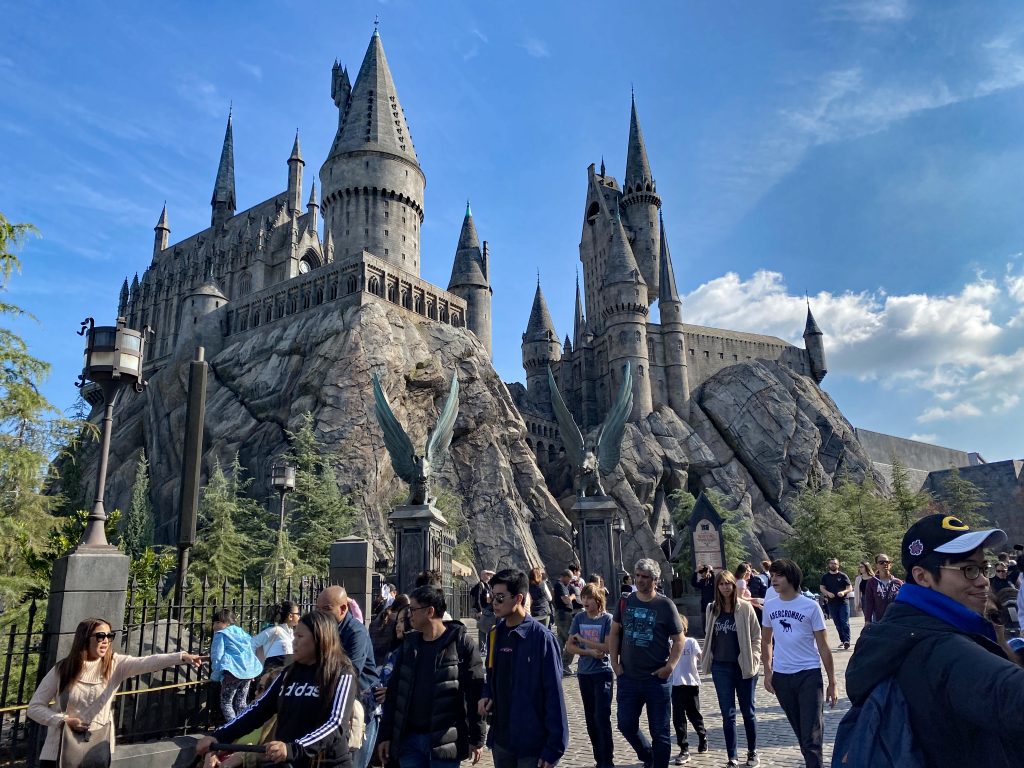 Lucy was not tall enough to go on the ride inside the castle, but we were able to walk through the school (Lucy told me it is a private school) to see all the amazing "talking" paintings inside the hallways, before waiting inside a "chamber" while Dave and Leo took the ride (some-sort of virtual-reality scenario, where the tram you are sitting in goes no where, but jumps up and down and all around - simulating you flying on a broom - through the screen in front of the car. 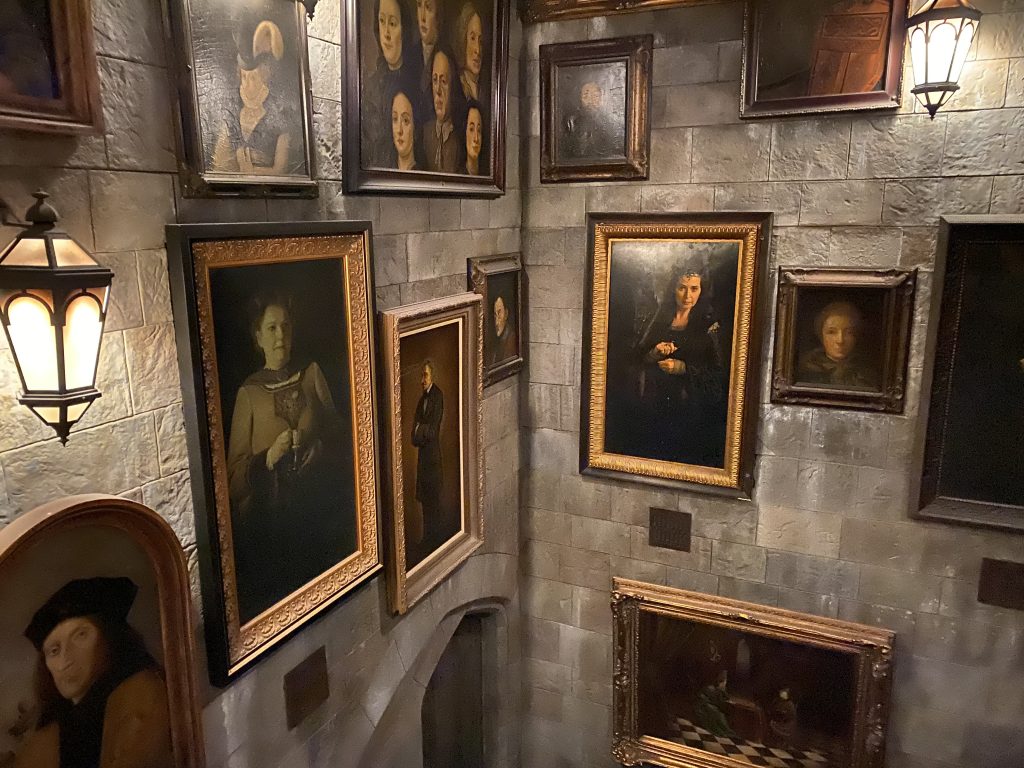 Lucy was tall enough for the Flight of the Hippogriff roller coaster inside the Harry Potter portion of the theme park. Which meant someone had to ride with her... and Bubba rode with Leo, so it was up to me. I just hate, hate, hate, roller coasters, but I love Lucy enough to hold on for dear life. Having her right by my side, I just closed my eyes the entire ride... which I kid you not, could not have been even one minute. Mercy. Lucy was shrieking with excitement the entire time. Poor DT, still a bit queasy from the VR broomstick ride inside Hogwarts, was not on his best game after the first two amusements of the day. 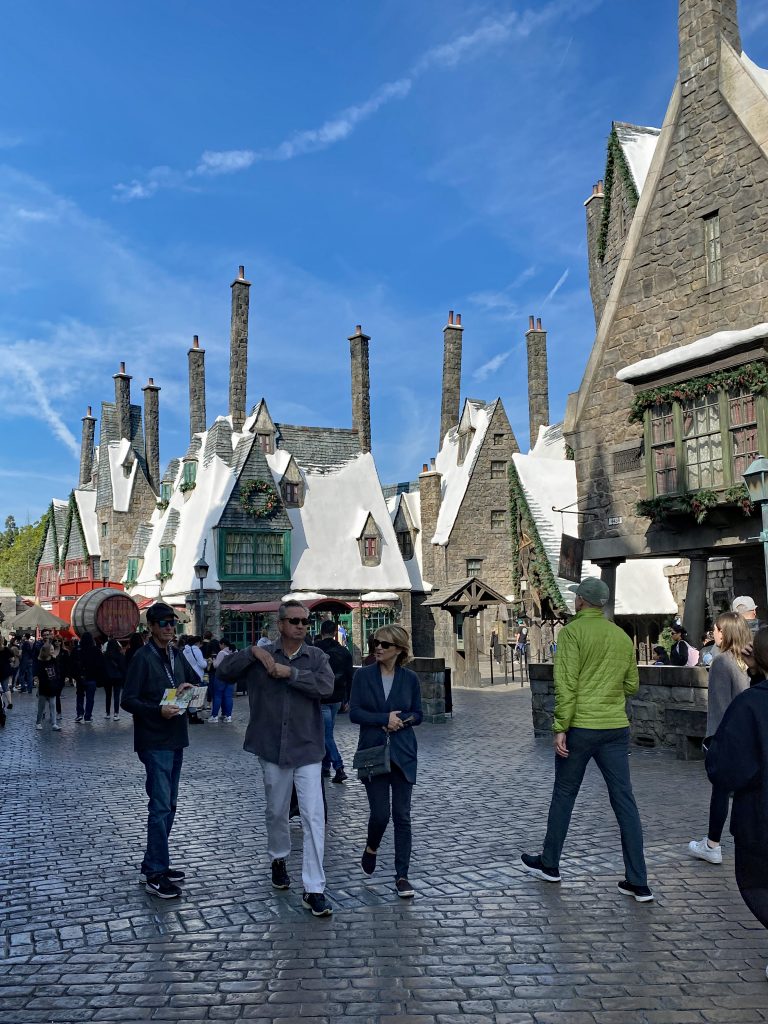 Universal Studios have made it snow this winter in Hollywood. The village at the base of Hogwarts is covered with snow and (until a few nights ago, dang), it "snowed" every evening. The village is very cute and want-to-be wizards can purchase everything they need in the little (gift) shops. Leo and Lucy were quite smitten with (stuffed) owls, but we convinced them to decide later upon a souvenir. What if they found something they desired (in a different "land") more than an owl? (Not to mention, I certainly did not want to cart two owls around the theme park the rest of the day!)

So off we went to Springfield, to see the Simpson family. Our grandkids have no idea about the Simpsons. Probably just as well, though their mom was raised on this TV show (the creator, Matt Groening, is from Portland, Oregon). We were all were tall enough to go on the Simpson ride, and it, again, was another virtual reality simulation thing where the cart we sat in jiggled around and a huge movie screen in front of us carved our journey. After this, we took a break for lunch and a rest before heading off to the live show at Water World. Based on a 1995 film starring Kevin Costner, the Universal Studios stunt show is situated around a large lake (supposed to be the ocean). It is the future, and the polar ice caps have completely melted. Humans live on man-made islands created with whatever junk they can find. Rumor has it, there is land-ho somewhere and these humans are searching for dirt. 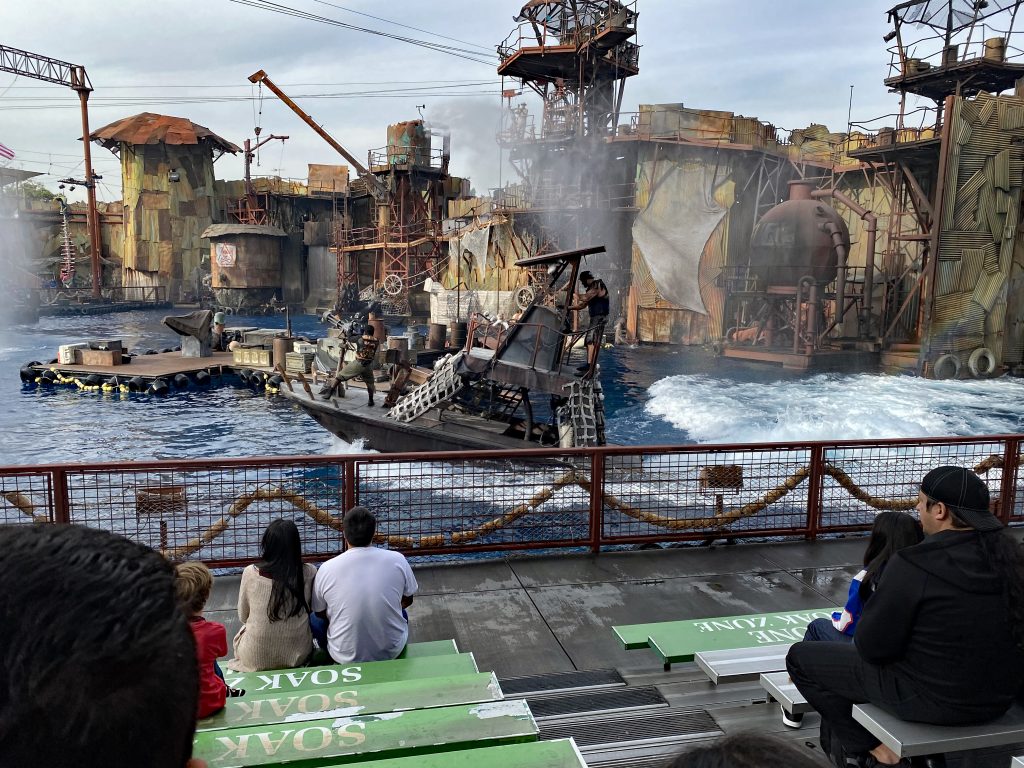 The first few rows in each section of the arena were marked in green as "splash zones" and you know our Leo was front and center. (I made him remove his sweatshirt, so at least some portion of his attire would be dry.)

Leo had more fun than anyone else in the audience.

The show was all about special effects. Bombs. Shooting. Lots of people falling from tall structures into the water. People chasing each other in boats and jet skis. People careening off ramps, and crossing over the water in bucket-like gondolas. The climax was a sea plane landing - and exploding - in the water. (Really amazing. Go see this.) 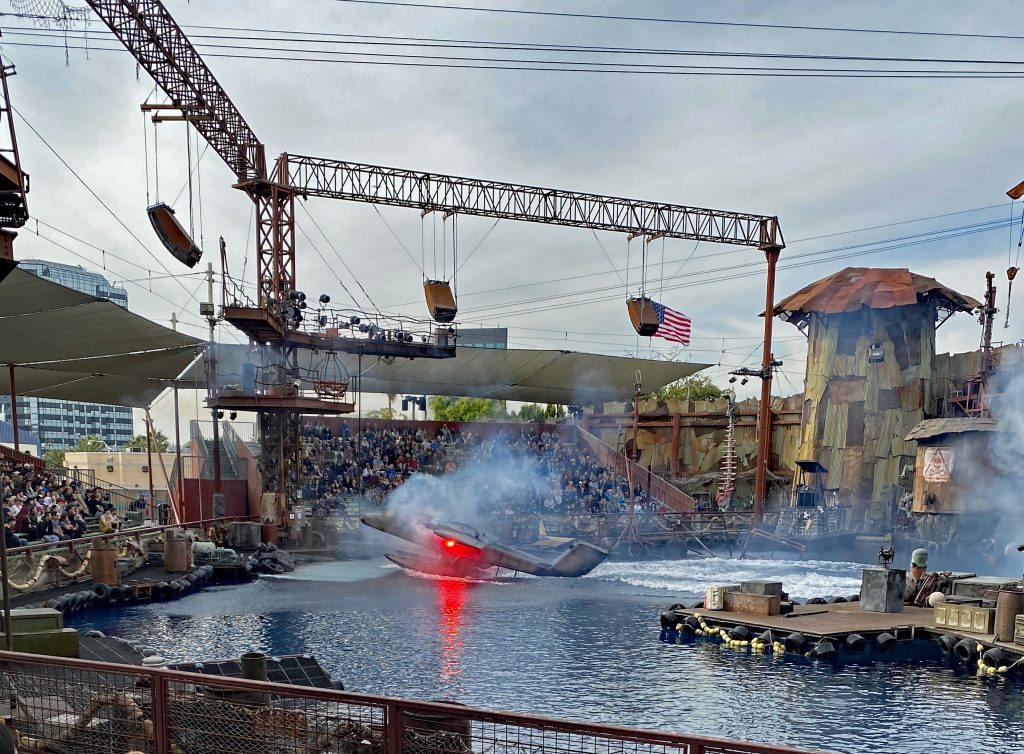 After the sea plane crashes, the evil dude is (completely on fire and lands in the water) killed and the good guys escape the scene amidst exploding fuel tanks. (Maybe we should watch this movie?)

With our Express passes, we were able to stay after the show for a behind-the-scenes chat with the cast. They talked about their careers (few are stunt people, most are actors whom they train), and how the stunts are produced. The most amazing thing was watching the sea plane being brought back to it's hidden position "back stage" in preparation for the next show. After the plane is lifted out of the water, it must remain above the water/lake for several minutes while 300 pounds of water drain from the body of the plane.

After the show, we headed over to the kiddie area, so Lucy could go on a few rides that did not contain guns, fighting, nor having your spine realigned. We rode on kiddie rides and she spent some time on the play structure. Gramps set her up at an arcade and Lucy won a Minions doll. 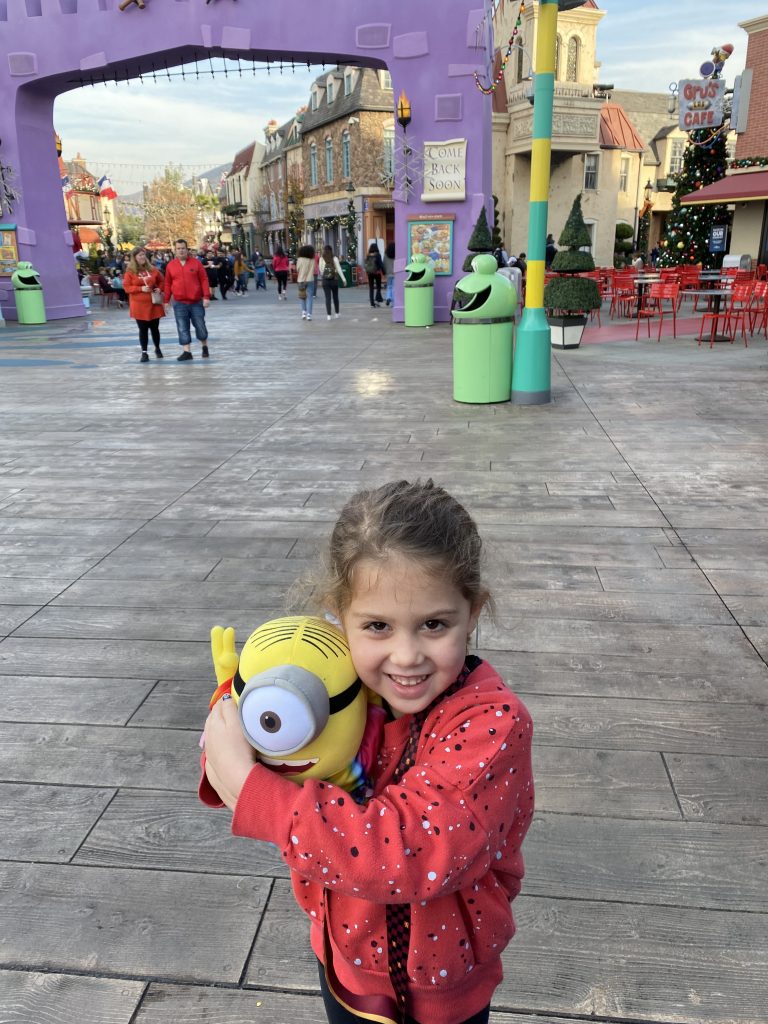 Oddly, Little Lucy won something and Leo was skunked at his attempt to land a ball inside a target: 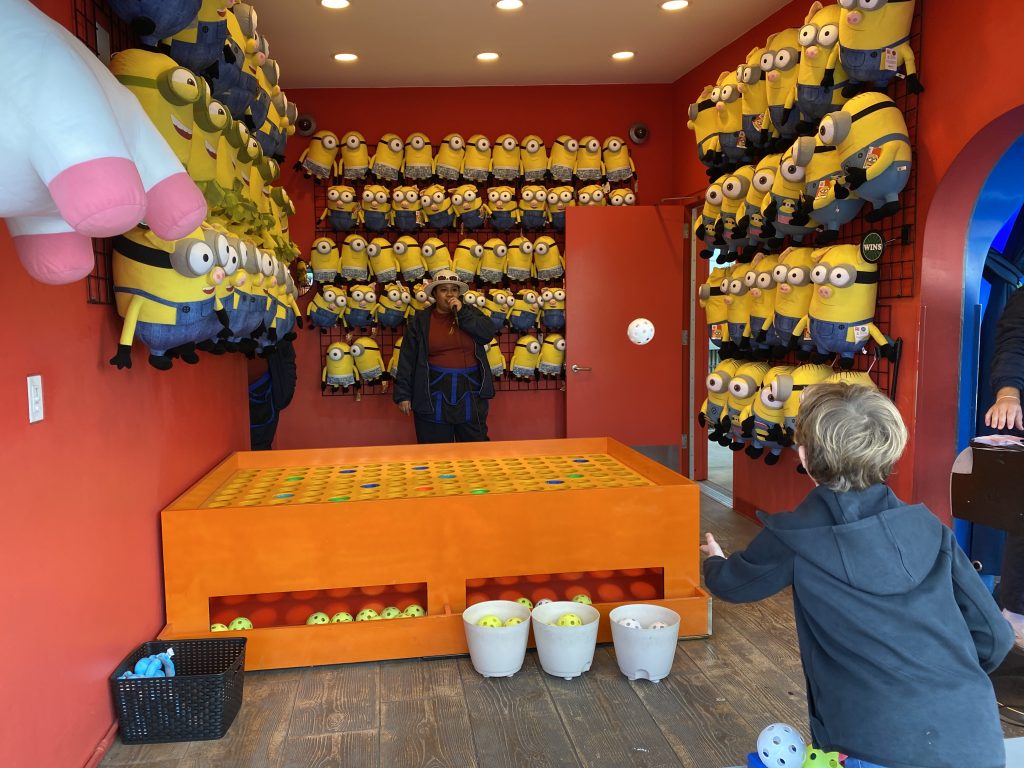 Our minimalist daughter was not going to be happy with yet another stuffed animal appearing in her house. Is it our fault her daughter is so skilled at shooting water at a target?

Our next adventure was to the Universal Animal Actors show, where we were able to see how animals are trained to act in movies, TV and commercials. The entire thing was quite interesting and very amusing. Leo and Lucy were loving every moment. We saw dogs, cats, rats, Guinea pigs, pigeons, owls, falcons, pigs, chickens and probably many more animals I can't quite recall, go through their training. At several portions of the show, owls or falcons flew directly over our heads. Leo was amazed (and a bit grossed-out) when the trainer handed a dead mouse for an owl to munch on! Like the after-show at Water World, Express pass guests were asked to remain after the show and the kids had their photos taken with animal stars: 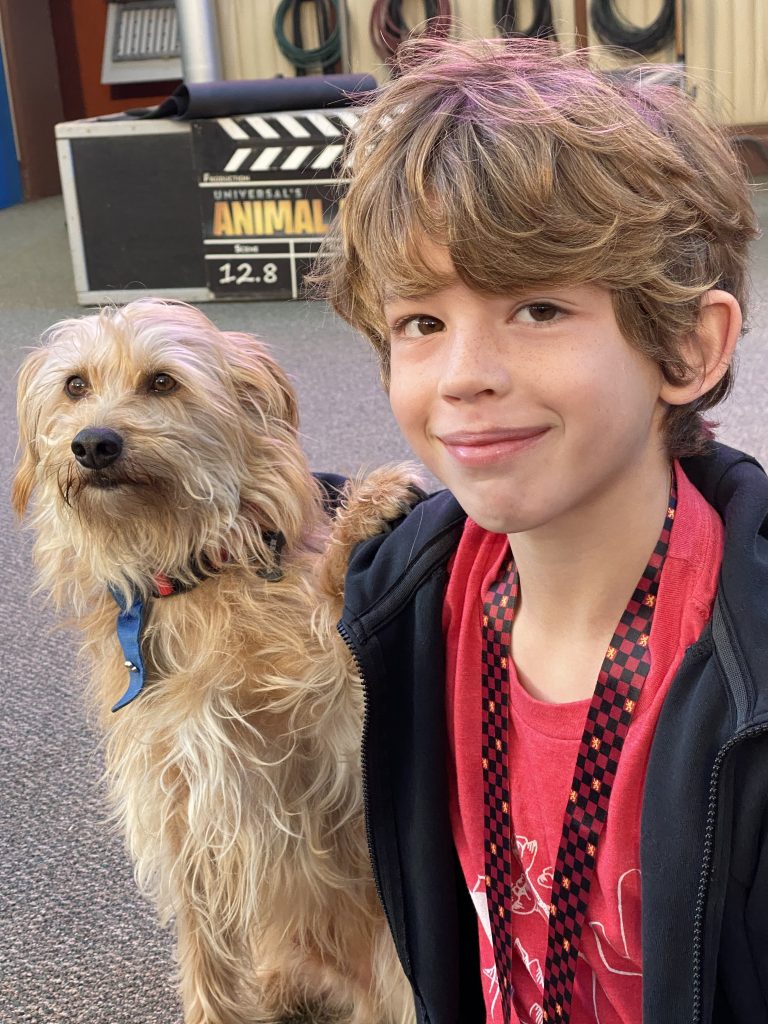 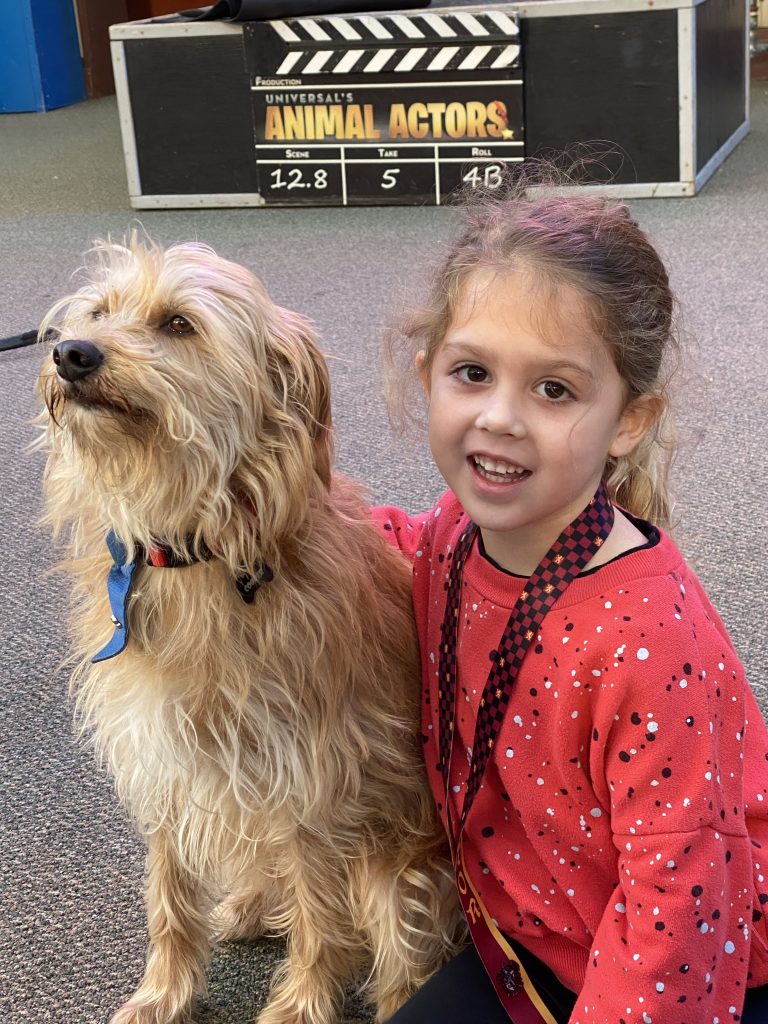 This adorable pup was in Benji 2 and stars in many commercials. 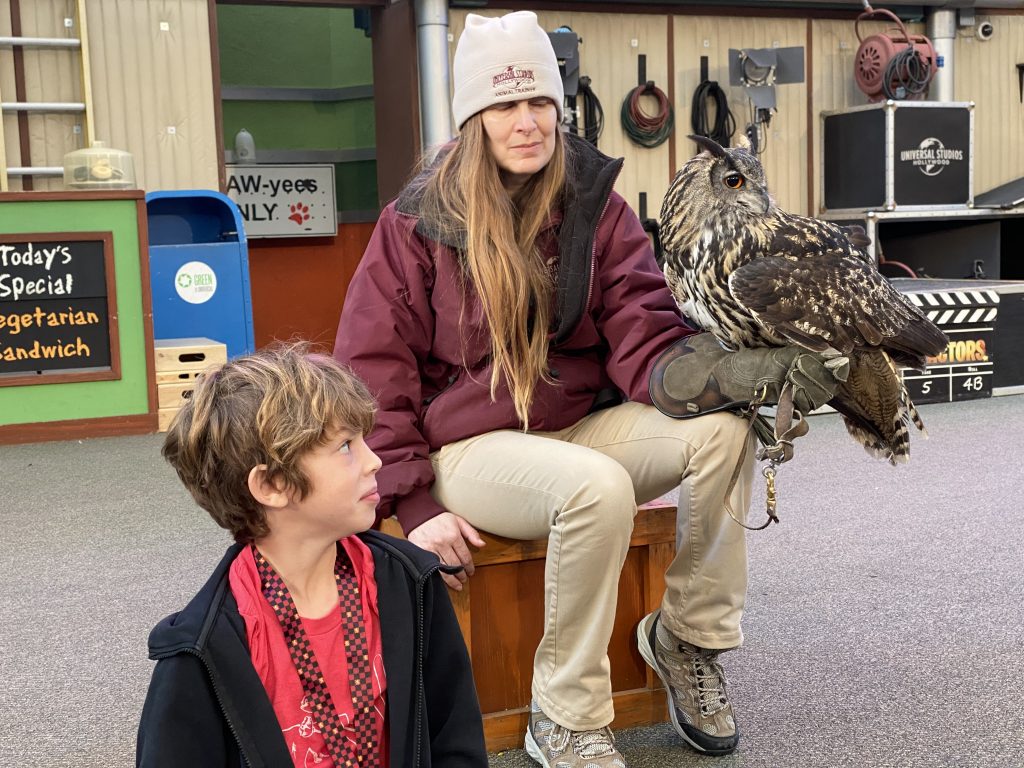 I just saw you eat a dead mouse! 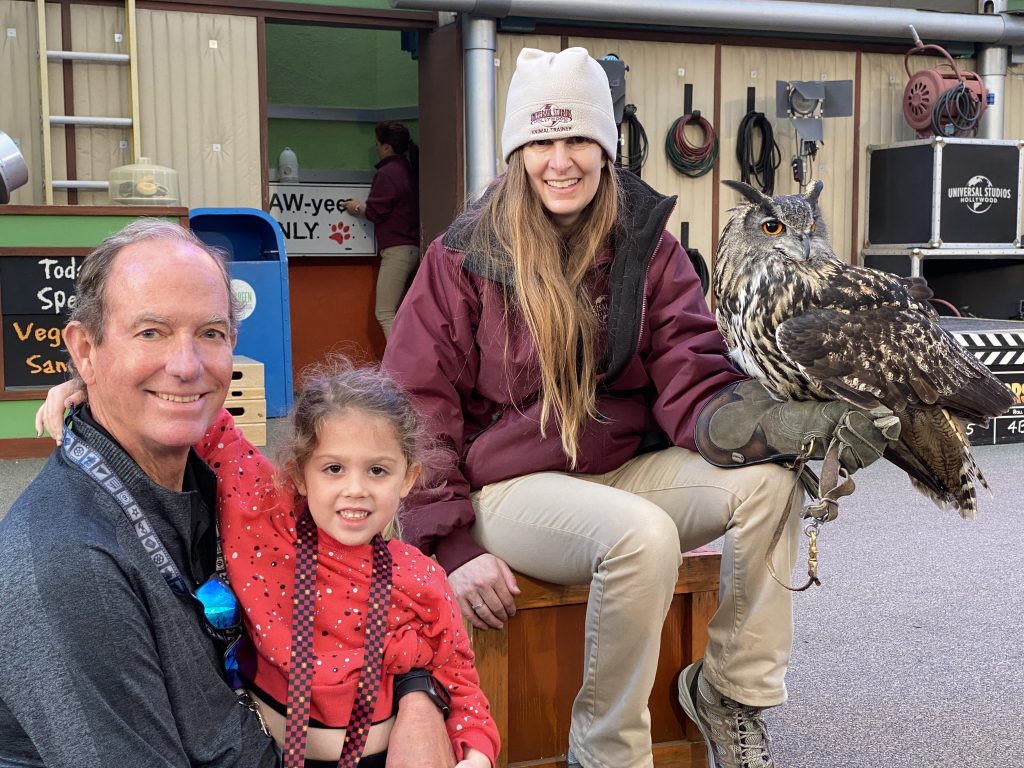 This African owl is even larger than a Great Horned Owl.

The last adventure of the day was to take the hour-long studio tour. I wasn't sure the kids would be into this, but it was really the top item on my to-do list. Turns out they loved it, because the tour not only included a tram drive-by though sound stages, historic sets (western sets, US city sets, European city sets, suburban America sets, villages, random plane crashes, and everything in-between), we were also able to see the sets for Jaws (and be "attacked" by the shark), and King Kong (you get "spit on" by dinosaurs). Every 15-minutes or so, the tram would suddenly become attacked by King Kong, or would be involved in a terrible earthquake while in a San Francisco subway, or I can't even figure-out what Vin Diesel and Dwayne Johnson were doing in Los Angeles during a car chase scenario from the Fast & Furious franchise. 3-D glasses were provided to enhance the experience. Poor Leo was once-again freaked-out - not by an owl eating a dead mouse - but by Norman's mom rocking away in a window of her Gothic home above the Bates Motel from the 1960 film, Psycho. (We don't think Lucy noticed.) (Whew.) 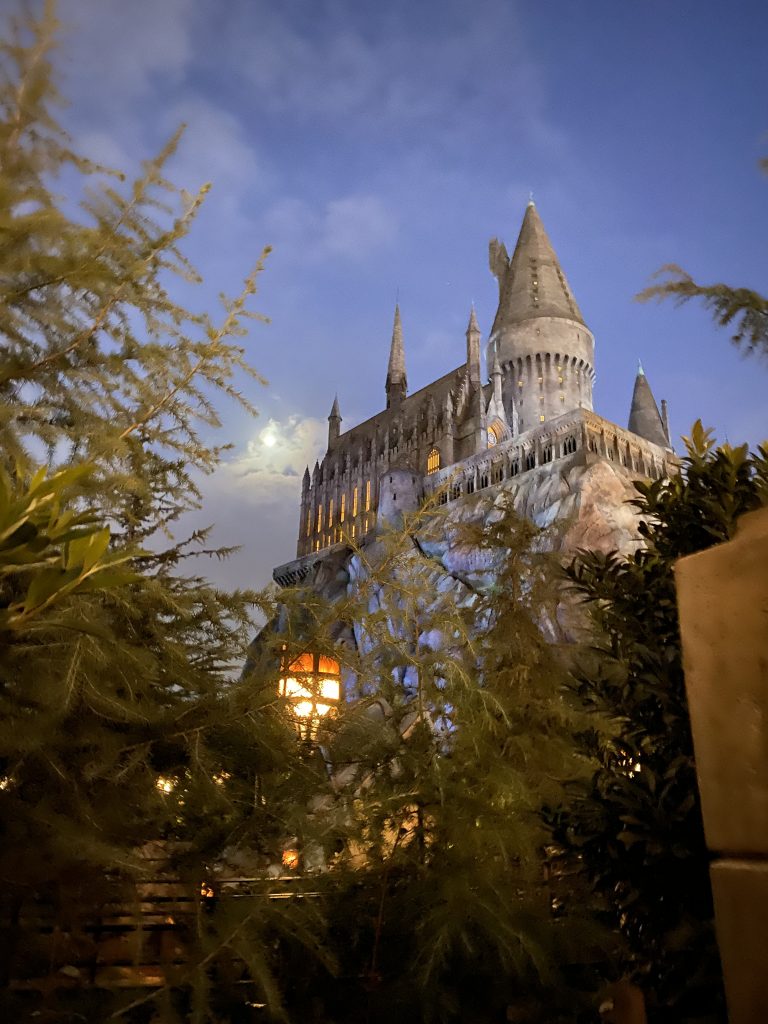 It was getting dark, it was getting cold, and the park was set to close at 6p. Lucy and Leo had not found a "better" souvenir than an owl, so we headed back to Hogwarts. Leo (age 8) chose the "Harry Potter" owl. This owl is actually a puppet. Leo can turn the owls head and press a button to make the owl chirp/coo (or whatever an owl does). Lucy, 5, decided upon a backpack/purse situation from the Griffindor House (Harry's clique), and a blank book with the Hogwarts logo emblazoned on the cover. While Lucy and I rang-up the gifts, Leo and Dave rushed to ride the Flight of the Hippogriff roller coaster one more time before closing. Lucy and I wandered up to the roller coaster exit and saw a kiosk selling wands. Lucy and I chose a Harry Potter wand for Leo. He was so excited for his surprise gift! 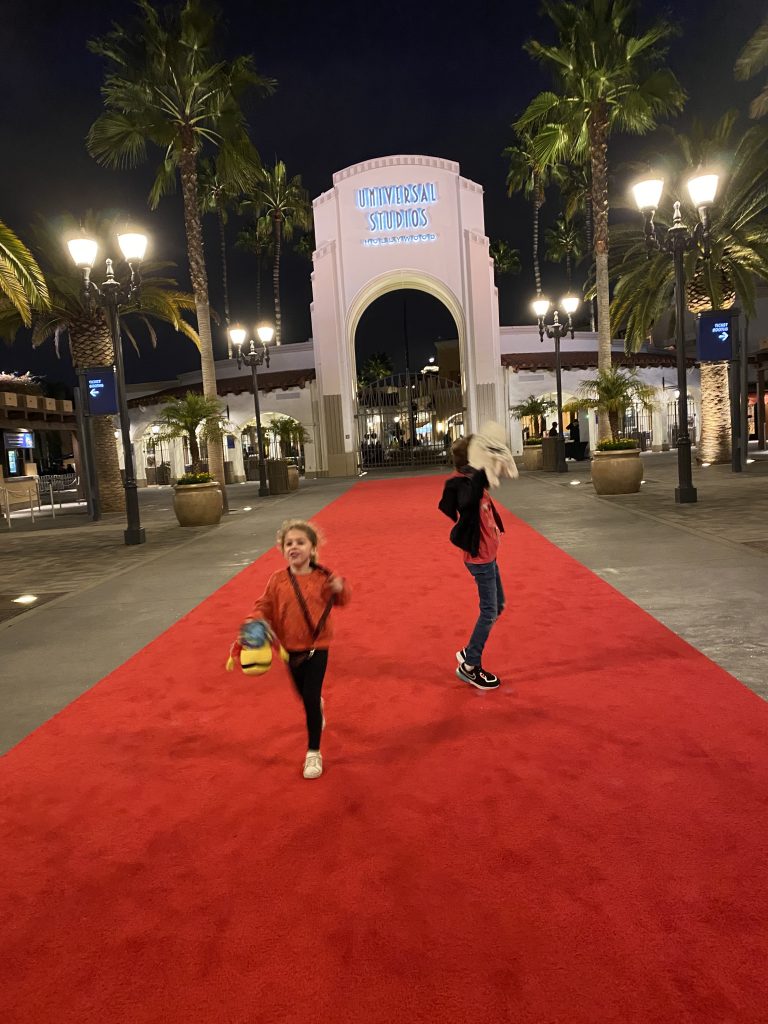 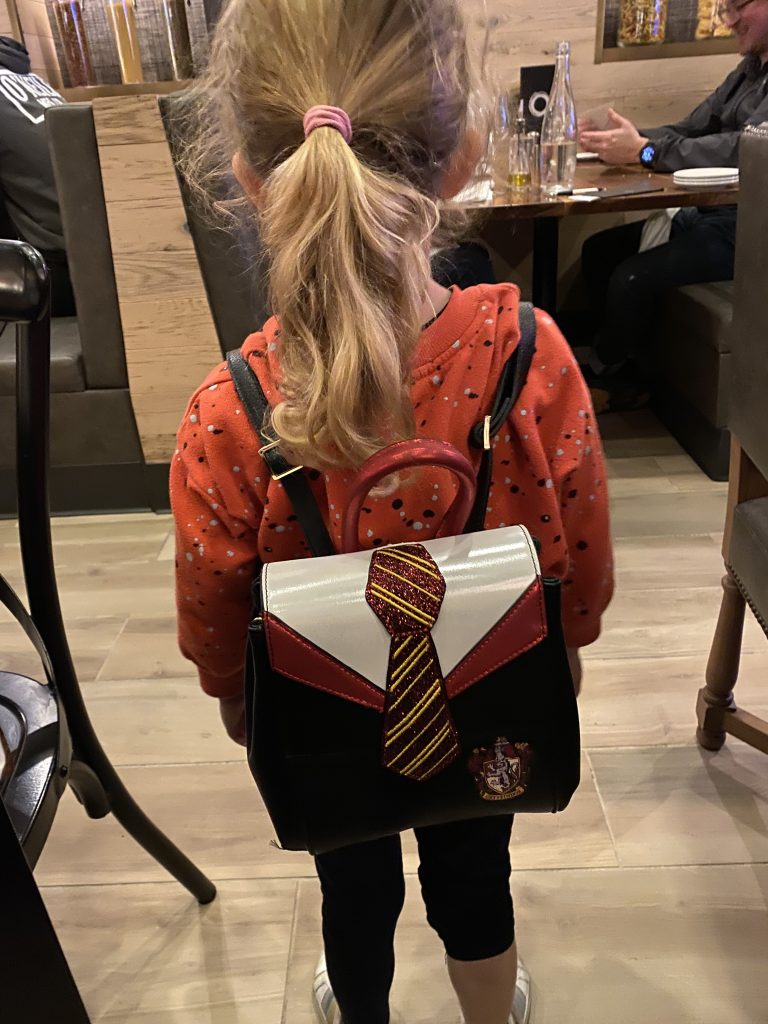 Now the park was closed, so we had to exit. We wandered next door to City Walk and found a seat at the warmest restaurant we could find. Italian! The kids had been so good all day. We had water to drink, and lunch, but they never had a snack, an ice cream - nothing. We were too busy having fun. We were now all starving, so chilly, and so happy to sit down. They ate well, and had dessert, before we delivered them to their long-home-from-work parents!

It truly was a fantastic day. We need to return though, as we did not see everything and the Jurassic Park section was closed entirely. The day was ridiculously expensive - maybe even more than a day at Disneyland - but you can't put a price on a day with your grandchildren!

Until my next update, I remain, your Universal correspondent.