7 am: Does it seem like forever since the last Oregon football game? It was only 13 days ago. Anticipation of the Civil War has reached epic proportions in the Great State of Oregon with the winner of the 113th game going to the Rose Bowl. There is virtually no other subject discussed. Obama is sending 30,000 troops to Afghanistan? There was an election in Honduras? Tiger cheated on his wife? What? 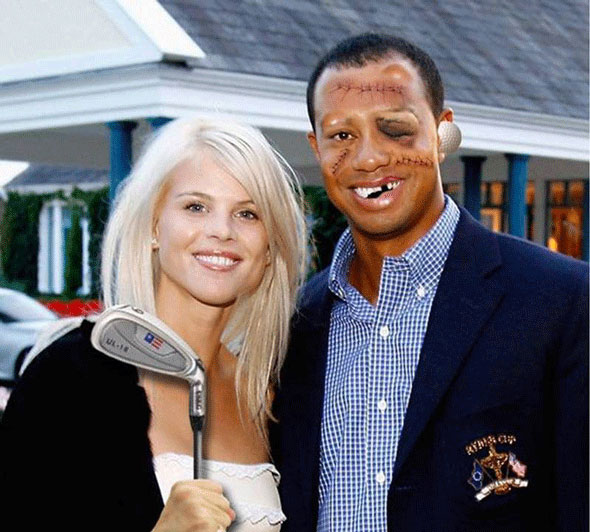 Oregonians are more concerned about which of the 200-plus possible uniform combination the Ducks will be sporting at Autzen tonight. Not me. I don't care what they wear, just so they win and no one is injured. Whatever they do wear, I hope it is warm - the temperatures will dip into the low 30's. Maybe NIKE has developed some sort of goose down uni's for the Ducks?

The preparation has finished. The teams are ready. The ESPN crew is in town. The hype has hyped. The fans are ready. There isn't a hotel room available for fifty miles in any direction. Every campsite is full. By noon, I suspect there will be only one lone six pack of Natural Lite sitting on a supermarket shelf somewhere on the outskirts of town.

9 am: Whoa. It is really cold. DT unhooked our water hose last night, but this morning the water spigot was frozen solid. A layer of thick fog surrounds the Coburg Hills. No, I will not be running up that hill today. 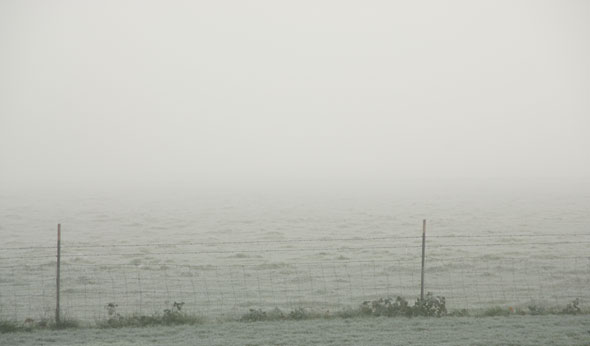 A crew was supposed to arrive at 8 o'clock to wash our bus. Guess they didn't think we wanted icicles hanging from the Magna Peregrinus, as they have yet to show up...

10:15 am: The crew arrived at ten o'clock and began washing our dirty bus. She must be beautiful and perfect for her first Civil War! As you can see from the photo below, the grass has thawed, but the fog is still thick.

By the way... it is Thursday. With Thanksgiving last week, and the Civil War on Thursday this week, I just can't get my days straight.

11:00 am: The crew has finished washing the Magna Peregrinus and she is beautiful. DT washed the interior windows. I read all the Tiger gossip on Perez. Tiger is being thrown on a spit and slowly (and painfully) rotisseried - now girls all over the country are claiming to be his lover. I want to make a statement right here on my blog and get it out in the public - I HAVE NOT HAD AN AFFAIR WITH TIGER WOODS. 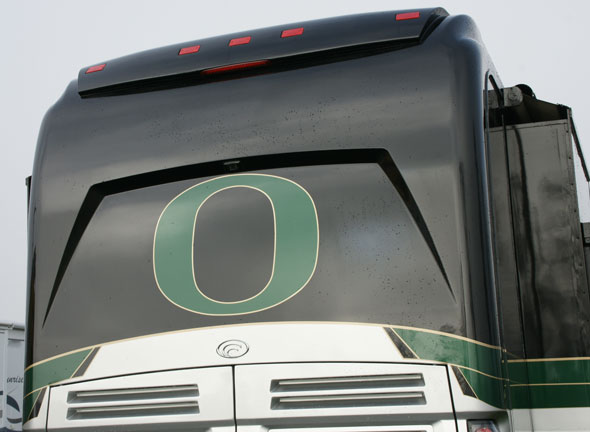 Isn't that a pretty shiny clean letter? Aren't we lucky to have purchased the "O" bus? A week earlier or later and we would have had to settle for the "N" or "P" bus!

Noon Weather Report: The sun is shining and trying to get rid of all the fog and clouds. The temperature is a balmy 37°. Wear layers. Lots and lots of layers. Speaking of layers... I am heading out now to fetch buckets and buckets of fried chicken. Catch you in a bit. 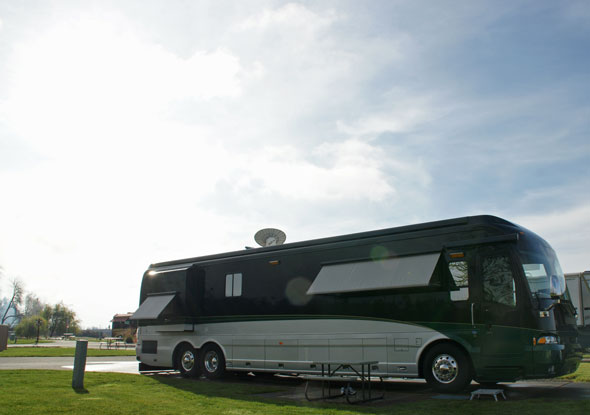 1:30 pm: The temperature has climbed to 38 degrees! Break out the bikinis! The fog still lingers. 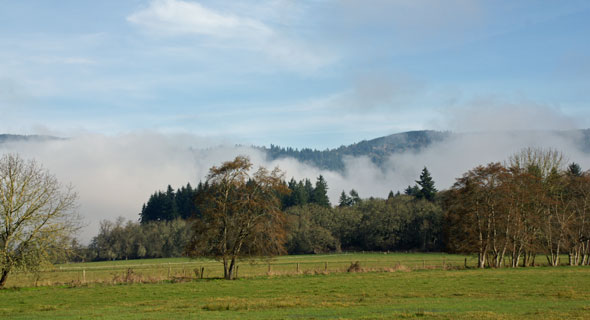 Dave and I headed out to fetch our tailgate food. We usually cook for our tailgates, but this game is going to be so crowded, there was no way we could cook to feed this many (and I am really lazy and after Thanksgiving, not exactly overly-excited about cooking), so we called the grocery deli and ordered a veggie tray and a cheese tray and then called The Colonel and ordered buckets of chicken! 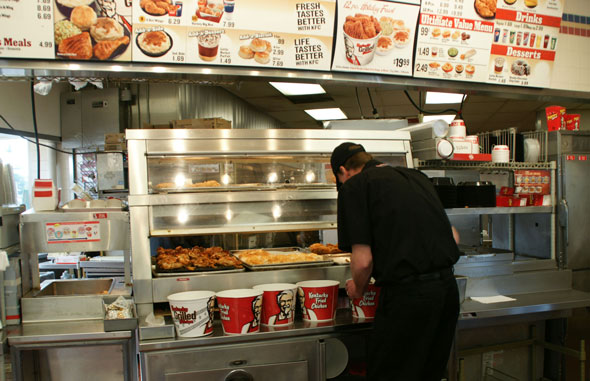 Baskets of Buckets in our car

We are now back to our RV and putting things away for the drive to Autzen Stadium!

7 pm: Our tailgate was awesome! Okay, we still have two buckets of KFC... but we had so many guests today for the Civil War. I am sure I was not able to even greet half of our guests. Such fun, though! 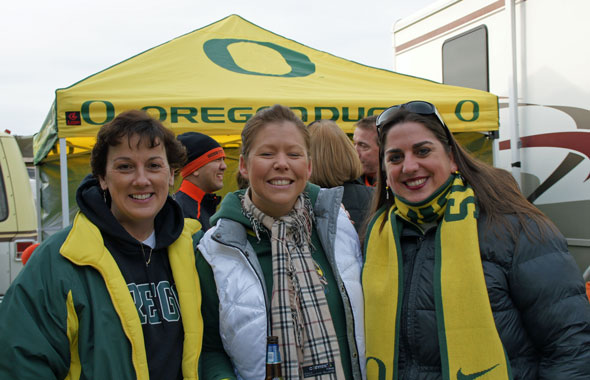 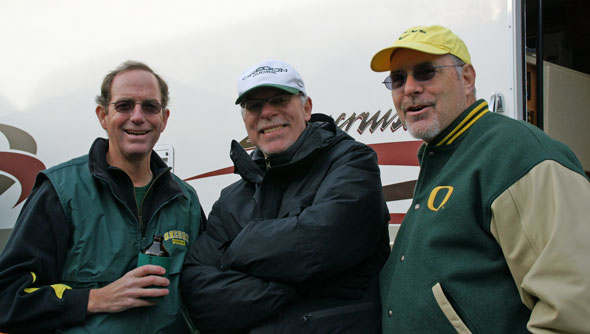 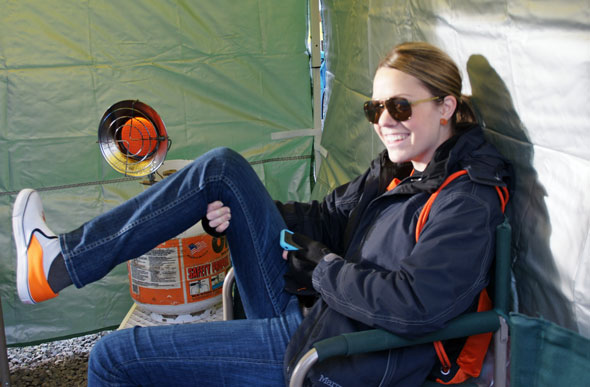 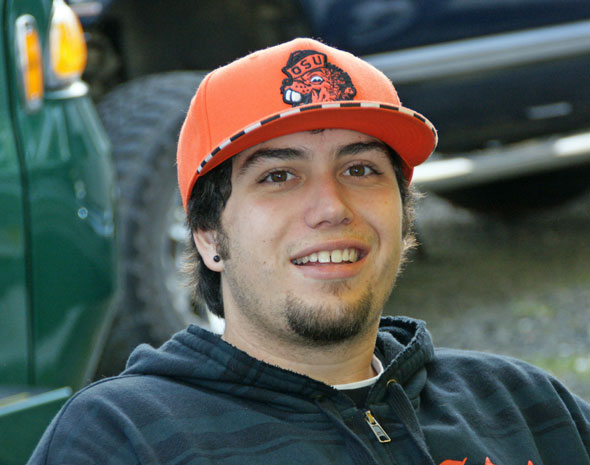 And her handsome BF, Greg 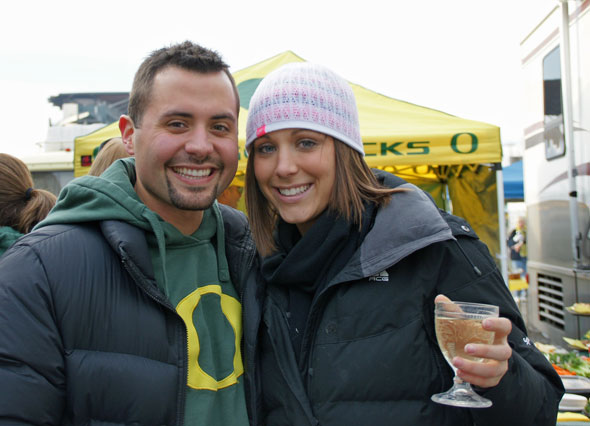 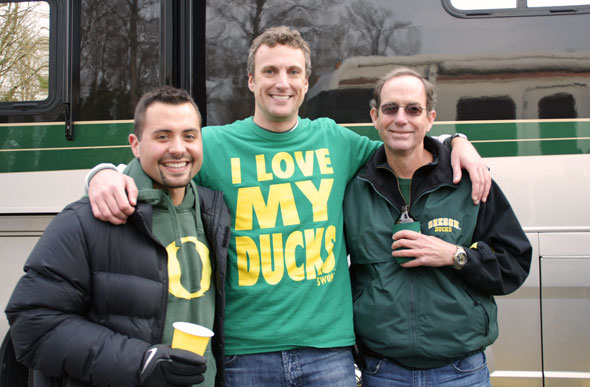 So remember the handsome cop I met on November 4 at a fueling place in southern Oregon on our way to the Stanford game? While we were fueling-up, I invited him to our Civil War tailgate and dang if he didn't stop by today! His name is Brett, by the way, and he is incredibly charming and incredibly handsome. What a great guy - Duck Alum, two Army tours in Iraq, State Trooper. Thank you, Brett! 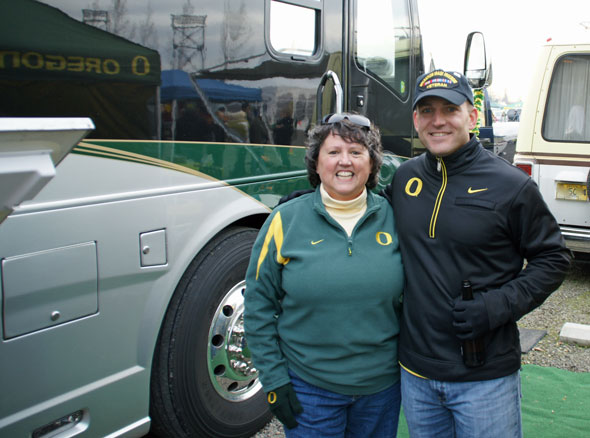 Me and My State Trooper 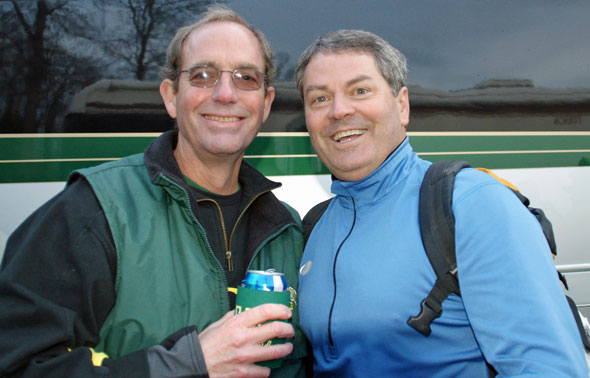 Speaking of our military... here is DT with My Captain - (prior) Navy Top Gun Pilot and Duck thrower 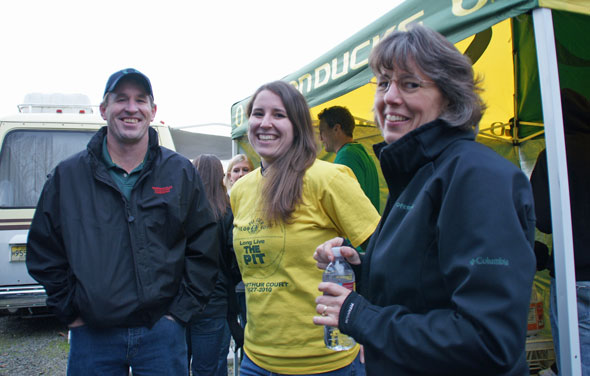 Even the Fam stopped by: My cousin Mike, daughter Kara and wife Joyce 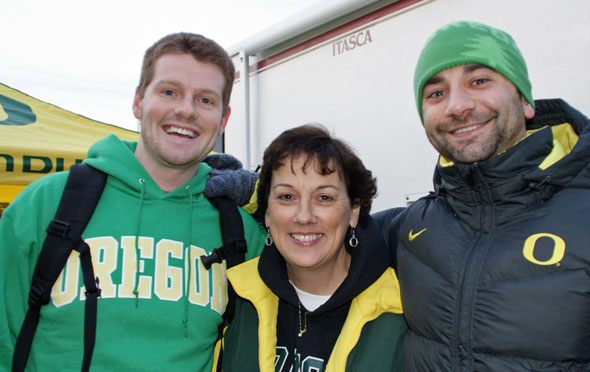 Mary with some of The Posse: Grant & Paigemon 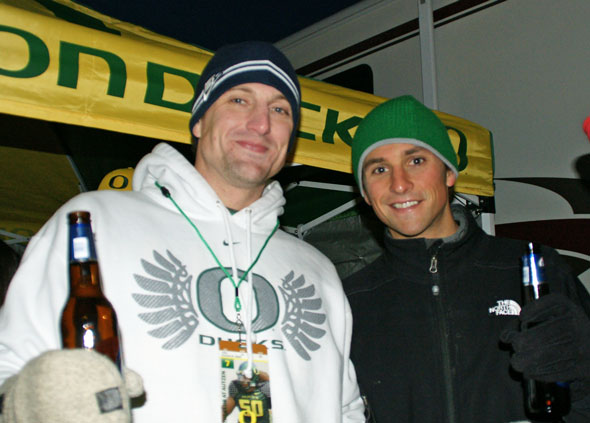 Everyone has gone into the stadium. I kindly gave my ticket to a young student and martyred myself into staying in the warm motorhome, with the furnace blasting - watching the game on our 42-inch HD television. It is 33 degrees outside.

Half-time Report: Several limo drivers are watching the game on our outside television. Happily too. I sent out a platter of KFC and they are munching away. They think I am a nice lady, but I am thinking I have a group of men outside and don't have to worry about errant Beaver fans capering my Duck Bus.

The Beavers are making good use of our mistakes on the field, but I am not even worried and know My Ducks will prevail... even if it will ruin Lisa's New Year plans in Los Angeles.

Late game update: Sorry. Had quite a few frozen visitors during half-time and several runners stayed to watch the game on our television through the beginning of the fourth quarter. A great game. So excited it is a good game as it is live on national television and I always want the Pac-10 to play well with national exposure.

We are down to only a few pieces of chicken and are running low on scotch.

We Won: So happy. Pasadena, here we come!

Dark Thirty: The post-game celebration continued quite late into the cold evening. Champagne corks were popped. Everyone is excited the Ducks are headed to the Rose Bowl. After the game we had quite a celebration in our warm motorhome. Here we are together after the fabulous victory: 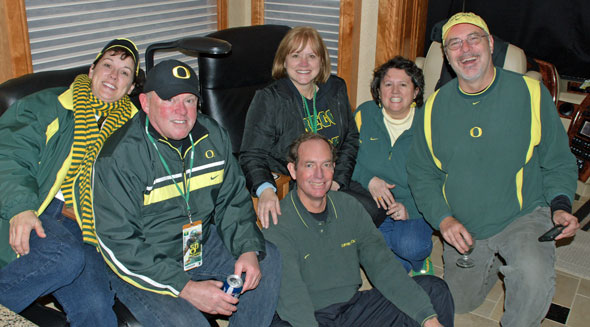 Suddenly the Duck (home) football season is over. On January 1st the University of Oregon will face Ohio State in the Rose Bowl in Pasadena.

Until my next update, I remain, your wait'l you see my "O" correspondent.

« The Day Before Post-game recap »