Los Angeles, California:  Though our Little Guy celebrated his sixth birthday this afternoon, he woke us very early this morning by sneaking into the guest room and snuggling down between us for a few precious moments of cuddles. We know these occurrences will be fewer and fewer, rarer and rarer, until they disappear completely... so we enjoy now, what we will surely miss later.

Lisa and Lenny have gone to extreme effort over the past five birthdays to produce amazing celebrations for Leo. Each year has a theme (links below) and spectacular foods, decorations and entertainments to ensure Leo's birth anniversary is feted in style.

Leo will officially turn six next Wednesday (2 August), but his party was held over this weekend. This year's theme was "Party Like a Rock Star" - or some sort of rock and roll scheme. Our usually-staid-hairdo guy needed a gallon of hair product (and a visit to a hairdresser) to turn his usual mop into a rock star Mohawk. 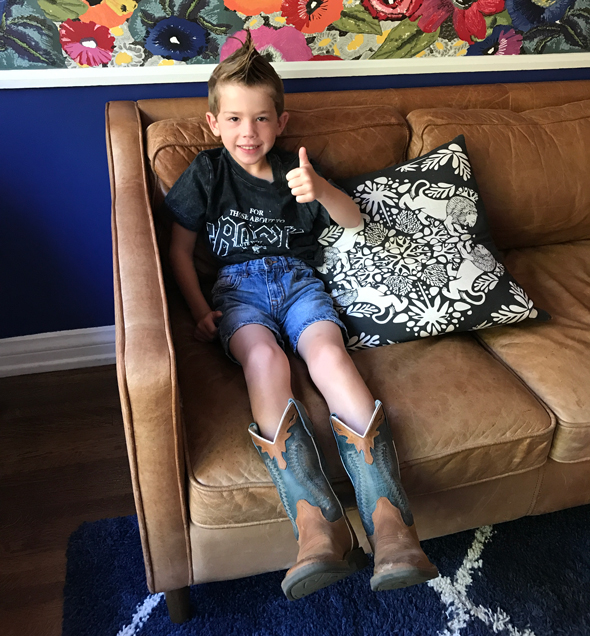 A Mohawk, with cowboy boots, of course. 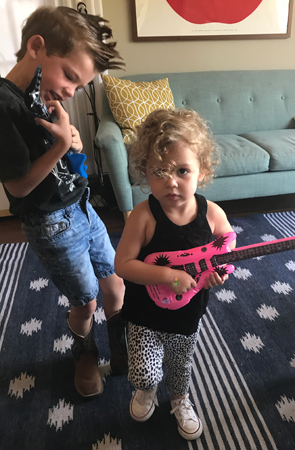 Lucy (nearly 3) is also in the band. She is the beautiful moody lead singer, while Leo is the eclectic bass guitarist.

Surprisingly enough (I was shocked), Lisa and Lenny held Leo's birthday party at Chuck E. Cheese. Dave and I had not been to this establishment since Lisa was a toddler. I wasn't aware the company was still in business. Leo had been invited to a few birthday parties at Chuck E. Cheese and had loved the experience, so Lisa decided to make things easy on herself and hold Leo's 6th birthday party there. 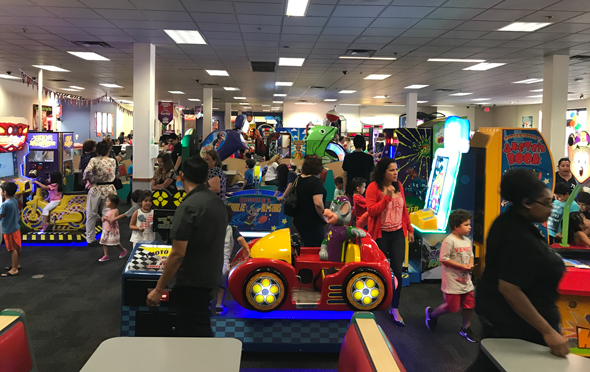 Things have changed over the past thirty years. Chucky E. Cheese is now mostly video games, rides and interactive games, with a video-taped "show" for the birthday celebrants. There is serious security at the door - adults and kids are co-mingle-stamped upon entering and a child can only leave with the adult they entered with. Lisa and Lenny bought a party package that included drinks, pizza, souvenir drink cups, drinks, etc., and a gaming card for each child. The kids busy themselves with games and rides using the gaming cards, all the while earning "tickets" they can later trade-in for junk/prizes. Pizza and drinks were also provided for the adults. (CEC offers a wide variety of pizza. None of it is very good.)

Okay. It's not only kids playing games. 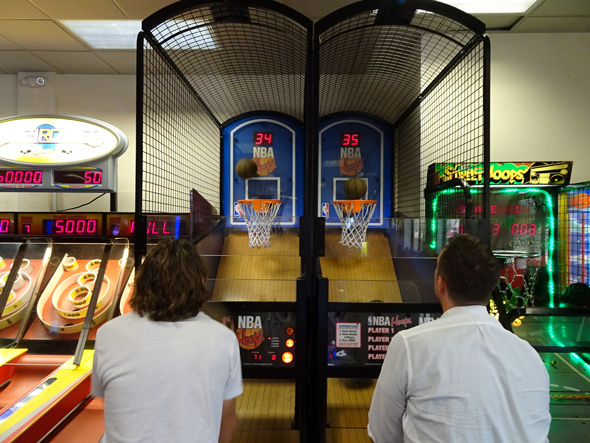 Lenny and Geoff (Leo's godfather) fight it out in a fierce pop-a-shot game. 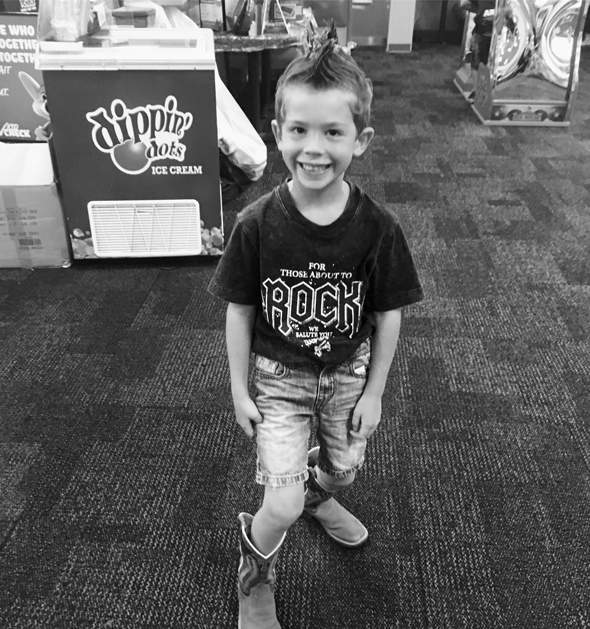 Is Leo a Country-Western rock star?

Or is he Ed Grimley? 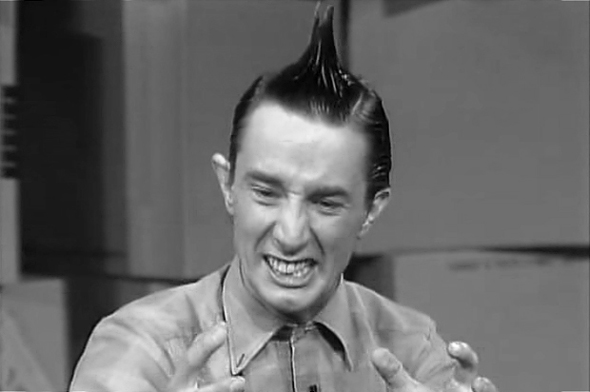 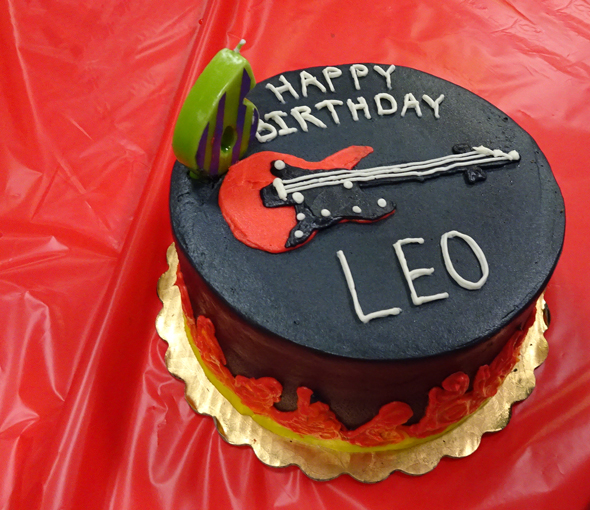 As is the case every year of his life, The Village Bakery and Cafe made Leo's birthday cake, along with a ton of cupcakes and pretty "cassette tape" cookies. So clever. 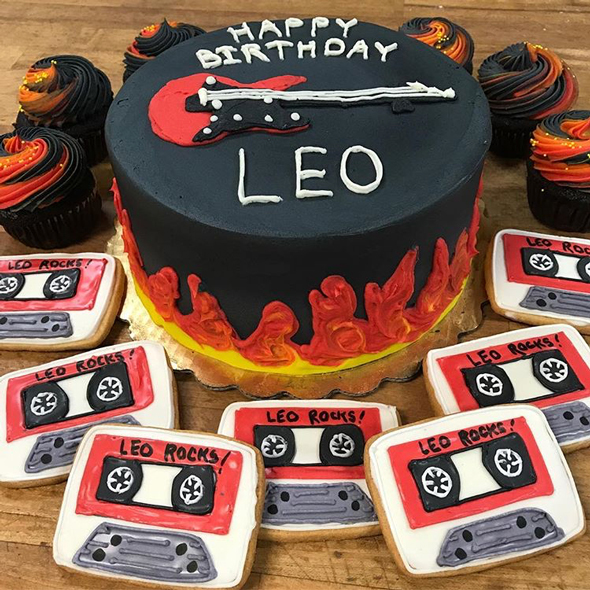 After the dessert portion of the party finished, the Birthday Boy was placed in a see-through booth, fitted with safety goggles, and left on his own as a wind-tunnel inside the booth blew hundreds of prize tickets around. The goal is to capture as many tickets as possible in the few seconds you are allowed inside the magical booth. 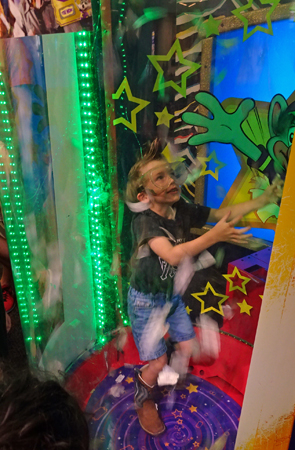 Not sure Leo caught many tickets, but quite a few fell into his cowboy boots!

All-in-all, it was a great party. No clean up. No prep (save getting together gift bags for the little guests). Kids had a great time. Parents caught up. (There is strict alcohol monitoring at Chuck E. Cheese! One drink per adult per hour. Strictly enforced. They actually swipe/scan your driving license every time you order a beer and the tap will not flow unless a license has been presented.)

Big Brother is Watching (how much you drink at Chuck E. Cheese).

As with every momentous occasion, there was an after party. Leo's godparents, Angela and Geoff, came back to the house to present their gifts and spend time with their little godson.

Until my next update, I remain, your "grandparent to a six-year-old" correspondent.