Indio, California:  The easy software update/hatch-lift recall on my Jeep turned into a three day affair, with me driving the rental car/loaner all the way back to Palm Springs (45 minutes), only to learn my car needed to remain for another day... which turned into two more days... which turned into finally getting the car back this morning. There was no charge, sans the lube, oil, filter (not yet required, but the car had over 5000 miles and I felt it was needed - $69). The rental/loaner fee was waived, which was a nice gesture, as I had to put fuel in the tank of the rental car... and it was (I believe) the fifth time I have ever put fuel in a car and cannot understand why every state does not require a service station attendant - like in the GREAT STATE OF OREGON - to fill your tank. With a $15 per hour minimum wage, imagine the boon to your local economy!

The delay at the dealer had nothing to do with the safety recall, software update or lube/oil/filter, but was due to the start/stop sensor. The 2015 Jeep Cherokee has a feature where the engine shuts-off when the car stops (as when at a red light, etc.). When your foot releases the brake, the engine comes to life again. This feature is common in a hybrid vehicle, and is now common in many newer non-hybrid vehicles as a fuel and pollution-saving device. In my car, this features only worked three times, then a friendly little reminder would flash-up on the screen reminding the driver that the start/stop feature needed servicing. (By three times, I mean the feature would work three times and then stop working until the vehicles was turned off, then it work three more times, on and an and on and on. Annoying. Especially the little ding-ding-ding that accompanies the warning message.)

The crew at the Jeep dealer thought the issue would most likely be resolved with the software updates, but when it was not, decided to order a new relay switch. The switch was installed and now we are requested to drive the car every day for three days in a row and - according to plan - the car will teach itself how to use the start/stop feature.

I am quite skeptical on this entire scenario, but will do as I am told and will report back to y'all the dealership on Monday. If only the car could teach itself the way to Lisa's house in Los Angeles...

It rained overnight because we had our motorhome washed yesterday. The weather has been so strange. Warmer in Portland yesterday than it was in Indio. The Coachella Valley is so overly desperate for rain, I will not complain. Again, we offer Governor Brown an easy $90-per-day drought cure by having the State of California pay to our bus to be washed every morning, thereby guaranteeing rain.

We would be willing to move to any area needing rain.

We are a super helpful couple.

Tonight our local posse gathered on our campsite for dinner. This will be the last time we will all be together for quite a while. Everyone is heading off towards home, family commitments, vacations, Canada, work, etc.

DT and I served Italian Shortribs in a lasagna (same thing I made for one of My 60th Birthday parties), Caesar Salad, Kalamata Olive Bread and Deb Perelman's Cannoli Pound Cake (cake is awesome and RV-easy as the recipe requires only one bowl to prepare, and a loaf pan to bake). 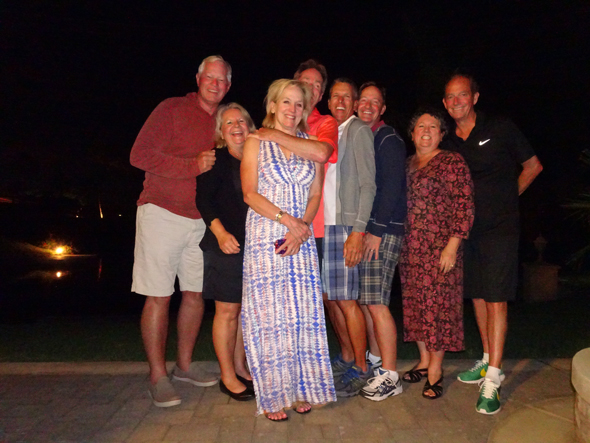 « Happy Hour: The Nest Catching Up + Packing Up »