Beijing, China:  Only Day 2 and we are settling-in to a pattern. Get up. Exercise (DT). Blog (Terry). Have coffee and breakfast at the hotel. Go to the track. Watch morning session. Return to hotel for a rest. Return to track for evening session. Sleep.

We were able to Facetime with our Birthday Girl in Los Angeles. They had all just returned home for Lisa's birthday brunch and she looked so pretty (as usual) in a new birthday outfit. Happy Birthday, Lisa. 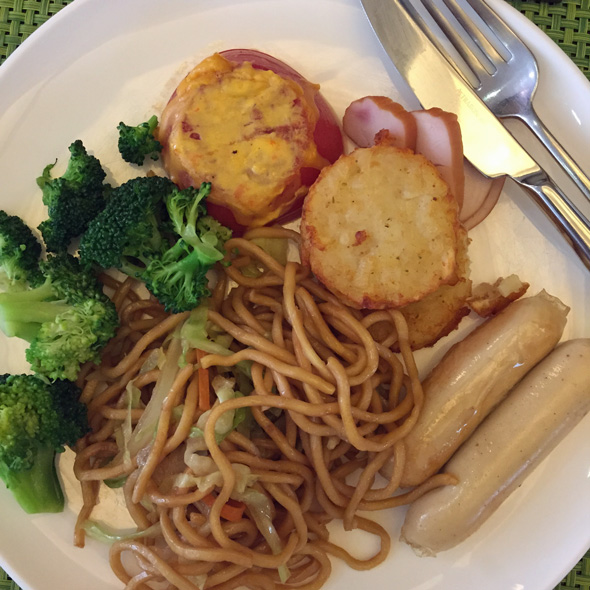 I had a crazy mixed-up breakfast this morning. Lots of fruit and then Singapore noodles, hashbrown patties, smoked sliced chicken and chicken sausages, steamed broccoli and a grilled tomato with cheddar "cheese". I wasn't confused, just wanted to try a few things.

We walked over to the track - and have discovered a new route that takes about 20 minutes. I'm getting lots of steps on my fitbit pedometer! 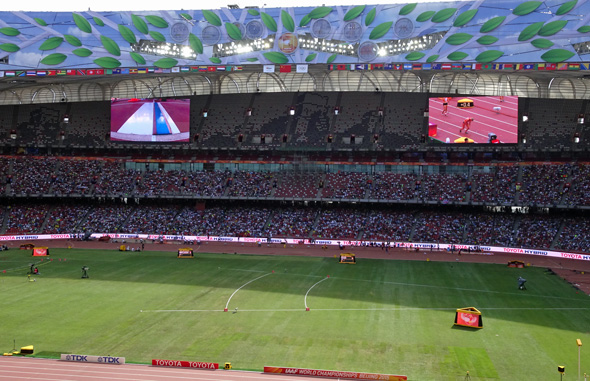 The metal tree sculpture used during the Opening Ceremonies last night was gone. Gone. An army must have come in last night to remove that giant thing.

It was a very interesting morning at the track. Brianne Theisen-Eaton did well in the long jump, but the English girl ahead of Bri in the standings had a terrible morning. Katarina Johnson-Thompson fouled on her first two attempts (you only get three), but her final jump was a monster. The judge did not immediately call a foul, but suddenly all the officials were huddling together and conferring. They ruled her foot had crossed the line and her last attempt was also a foul. Great Britain filed an official protest, but in the end conceded. No points for Johnson-Thompson in the long jump. Very sad.

Theisen-Eaton threw the javelin once and then conferred with her coach on the sidelines. She was pointing to her hip and subsequently told the javelin officials she was finished and would use her one javelin attempt for her score.

The men's 400m heats were smokin'! The first heat had at least five personal bests and national records. Can't wait to watch this event progress.

Two Ducks were in the women's 100m heats. Jasmine Todd (junior) and English Gardener (alum) advanced to the semi-finals.

After the morning session ended, Dave and I walked out to the now-empty fan area to see the booth advertising the World Indoor Championships which will be held in Portland, Oregon in March 2016. DT is on the 2016 Indoor Championship committee (which is another reason we are in Beijing - so he can observe and learn and go to a lot of meetings). 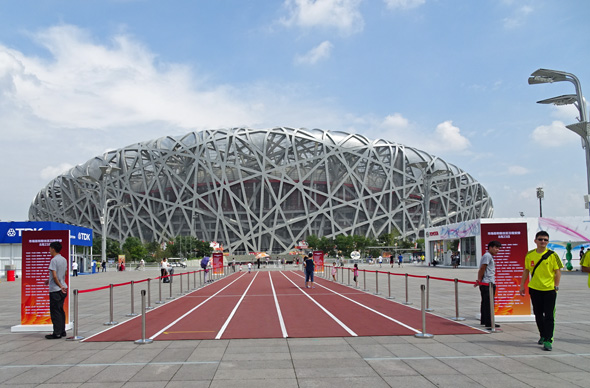 Fan area outside the Bird Nest (after everyone had gone home) 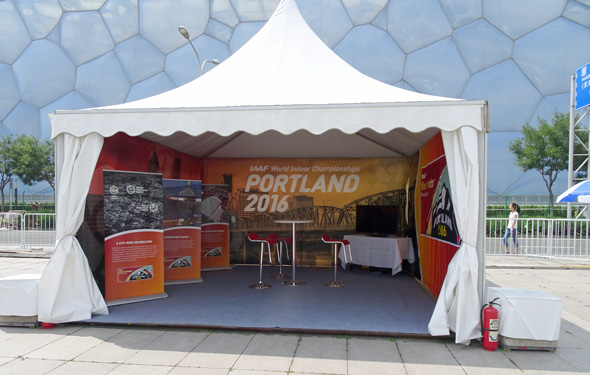 After a good rest at the hotel, we returned to the track for the evening session. This evening we sat with friends in the second row in front of the final curve.

Brianne Theisen-Eaton competed in the final event in the women's heptathlon, the 800m, this evening. She ran a very strong race. After all the points were tallied, BTE earned a Silver Medal for Canada! During the victory lap, she posed right in front of us and DT snapped this awesome photograph: 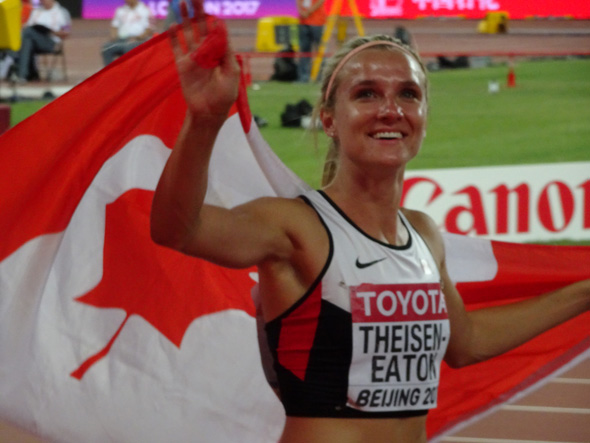 DUCKS V THE WORLD: There is a New Country in Town! Each day the IAAF score each event as if it were a college track meet and adds the official placing table to the daily printed program. Dave and I are pretending the University of Oregon is a country that has entered ten athletes. The Ducks earned 4 points from Galen Rupp on Saturday and 8 points from Theisen-Eaton tonight, giving Our Nation 12 points. We are in 10th place! In the World!

The big event of the night was the men's 100m final - the showdown between Usain Bolt of Jamaica and America's Justin Gatlin. There were four Americans in the final and the stadium was crazed with excitement because new Chinese sprinting sensation, Bingtan Su, was in the race.

The organizers brought the racers onto the track just as the hammer throw champions were receiving their medals. Poor form. This took all the attention away from the medal ceremony, and instead of being able to warm up, the 100m contestants had to stand at attention as the Polish national anthem was played to honor Pawel Fajdek's victory. After the medal ceremony, the sprinters were able to warm-up in front of us. They all looked so nervous - the world title was at stake. 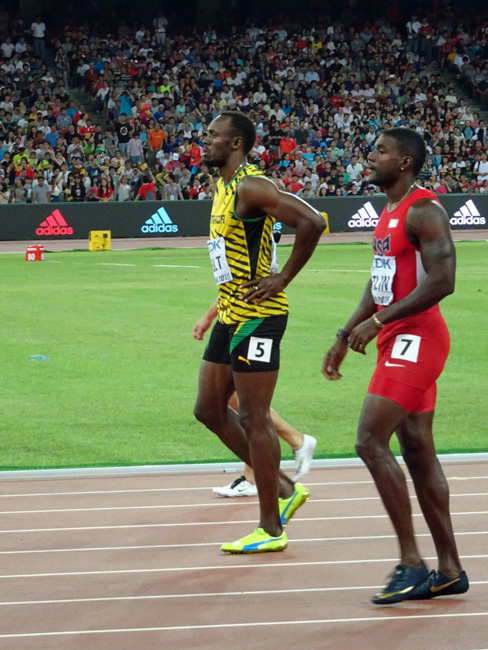 The racers lined up in front of their blocks, but instead of starting the race, a musician starting playing a snappy tune on a piano in the stadium. What was going on? 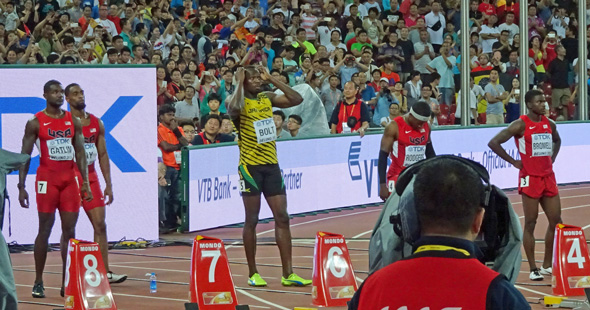 Which is exactly what all these guys were thinking.

Finally the nine finalists flew out of the starting blocks, with Mr. Bolt winning the Gold Medal for Jamaica. Bob Marley music immediately began playing over the stadium loudspeaker. Usain Bolt is the World's Fastest Man.

Y'all might think I was disappointed in the result, but I was not. Mr. Gatlin (and other American sprinters) are known drug cheats. They have been caught using performance-enhancing drugs. Caught, did their time, and have been reinstated. I don't like drug cheaters. I feel cheaters bring our sport down, drag it through the muck and make all clean athletes suffer and simply look guilty by association. I am for changing the rule to a life-time ban from the sport after only one infraction. And I'm not the only one.

Something I found ironic today:
Everyone warned us about the terrible pollution in Beijing, but the skies have been blue and the sky has been clear every day (so far). However... in Portland the sky is so thick with smoke from forest fires, there is a health advisory.

Until my next update, I remain, your clean correspondent.