Beijing, China:  Happy Birthday to The Lovely Lisa! (Aren't we just the worst parents? We would never think of missing Lucy's birthday... but Lisa's? Hey, we did get her a vacuum cleaner. Isn't that just so exciting?) Happy Birthday to the Best Daughter Ever!

We both slept well overnight, so maybe are adjusted to the local time zone. Maybe. (The temperature and high humidity in Beijing this week are not helping.) We went down to the (included with our room price) hotel breakfast buffet and were happy to find a wide variety of fresh Asian or Western foods. They even had sushi and a coffee bar. 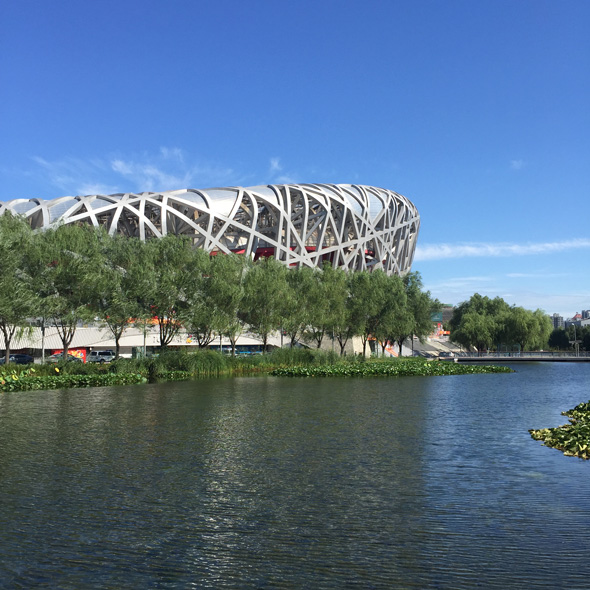 Let the Games Begin! Today begins the nine-day Championships in Athletics and we were over to the famed Bird Nest Stadium first thing to watch Duck alum, Brianne Theisen-Eaton, compete for Canada in the heptathlon. Actually, ten current or past Ducks are competing (8 for the US and 2 for Canada) at the World Championships.

Just a quick walk from our hotel, the National Stadium is quite an imposing site - and it is illuminated at night in bright colors. Spectacular. And huge. So huge it is hard to really grasp. 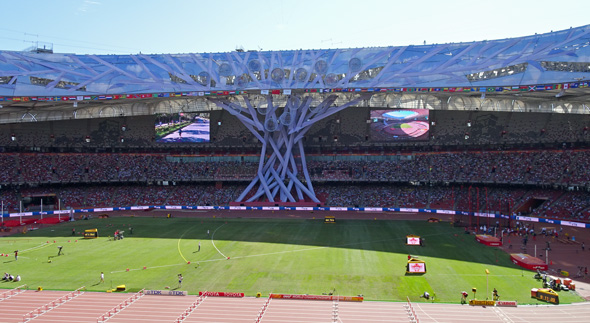 The view from the IAAF hospitality area.
The metal "tree" sculpture is for the opening ceremonies.

We discovered our seats were in full sun, so decided to stay in the IAAF hospitality (shaded) area to watch Brianne in the 100m hurdles. She was in the final heat and ran her fastest time ever - 12.98 seconds. Today was the first time Theisen-Eaton broke 13 seconds. 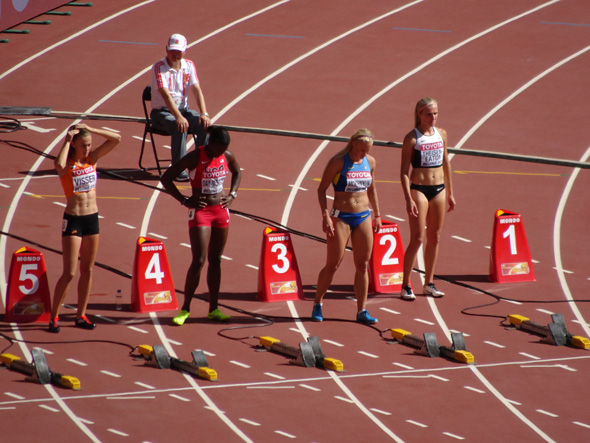 Lane 2: She may run for Canada, but BTE is always a Duck to me.
(PS: lovin' my new teeny camera)

The next event in the heptathlon is the high jump. Brianne is a great high jumper, but today was only able to clear 1.80m (which is still dang-near six feet, y'all). She finished 14th in the high jump and is sitting in 5th place overall after two events.

The men's marathon - which wove through the streets of Beijing this morning - finished in the stadium. The men came onto the track through a tunnel under the stadium and needed only sprint 100m down the straight-away to finish... except no one thought to put up a tape for the winner to break. The winner (Ghirmay Ghebreslassie, of Eritria) had no idea where to finish, and without a tape to break through, assumed he needed to run another lap (as is quite common for marathons that finish in a stadium). It wasn't until he was another 100m past the finish line that an official flagged Ghebreslassie down. Poor organization and very sad that a man won a 26+ mile race and wasn't even rewarded with a tape to break at the finish line. Betcha betcha betcha this will be reorganized before the finish of the women's marathon? By the way, Mr. Ghebreslassie is the first-ever gold medal winner for his entire country and the youngest (at 19) man or woman to win a WC marathon! Due to the high heat/humidity, the winning time, 2:12:28, wasn't a very fast. At the World Championships, you don't need to be fast. You need to be first. Prize money is awardedfrom first through eighth place for every final event. First place takes home $60,000 (US dollars). If an athlete sets a new world record, they receive a $100,000 bonus.

We took advantage of a several-hour break in the action to return to our air conditioned hotel room for a rest.

It was requested by the IAAF that their members and guests arrive to the stadium this evening via shuttle bus. We are not sure exactly why, but we think it has something to do why the government wanted the passport information of every foreigner in National Stadium this evening: Chinese President Xi Jinping would be attending the Opening Ceremony. We had to go through security screening (my bag was Xrayed and we were scanned with a wand and patted-down) before boarding a bus to the Bird Nest. Once we arrived and left the bus, we were escorted to the entrance gate, then put through another security check-point before heading to our seats.

Here is my interpretation of the Opening Ceremonies in pictures/captions: 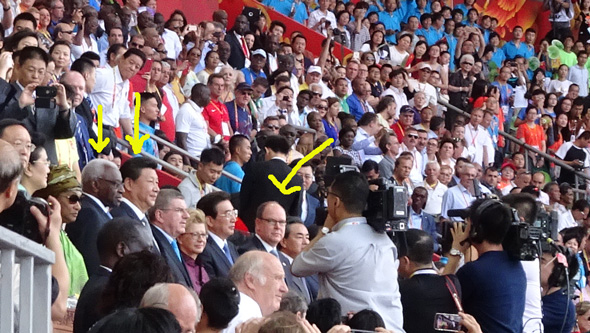 Yellow arrows, left to right: Retiring IAAF President Lamine Diack, Chinese President Xi Jinping... and His Serene Highness, Prince Albert of Monaco. You may recall seeing Prince Albert in a lot of photos I post from track meets. He is a huge track fan - especially the pole vault. The Prince is a huge supporter of The One True Sport. 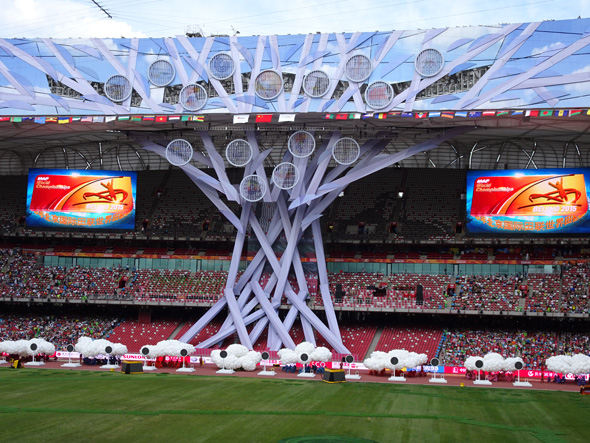 First, large groups of balloons gathered on the backstretch. They resembled clouds. Or cotton candy. Or cauliflower. Please note the silver "tree" sculpture in the background. 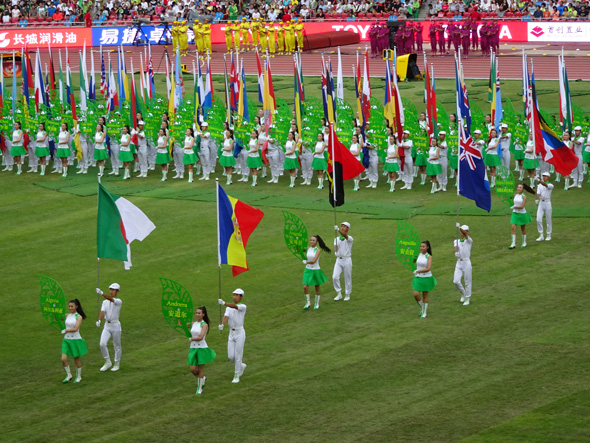 Then the crowd sat through the "Parade of Flags" - one for every country participating in the games. 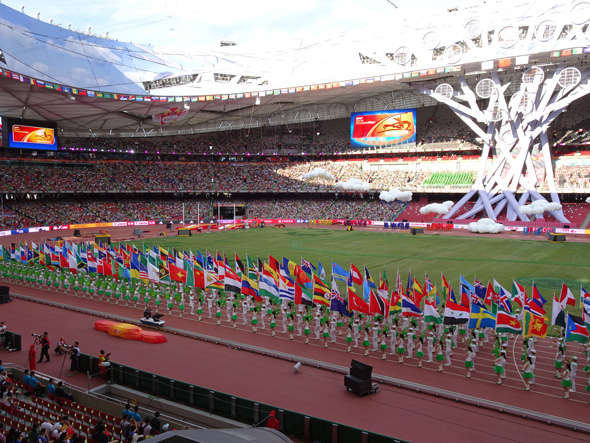 After the flags were presented, IAAF President Diack gave a welcoming speech. This will be his last. His term has ended. Lord Sebastian Coe (Great Britain) was elected IAFF President last week and will assume the role August 31st. 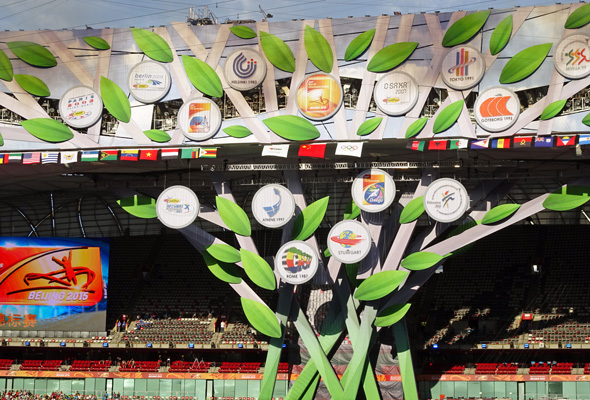 Then the President of China officially declared the game open and the metal sculpture began to turn green - from the base of the trunk to the tips of the branches - and green leaves opened! Very cool. 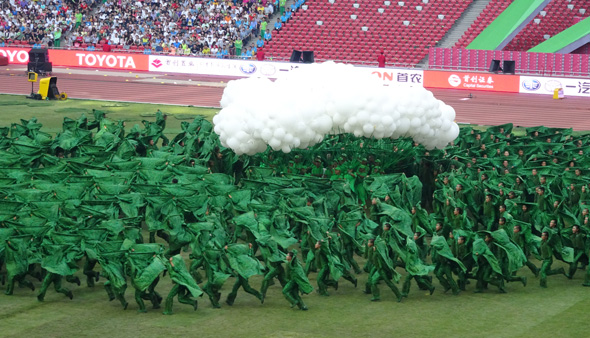 Suddenly, hundreds of green (leaves?) things appeared, carrying a (cloud?) bunch of balloons into the middle of the infield. 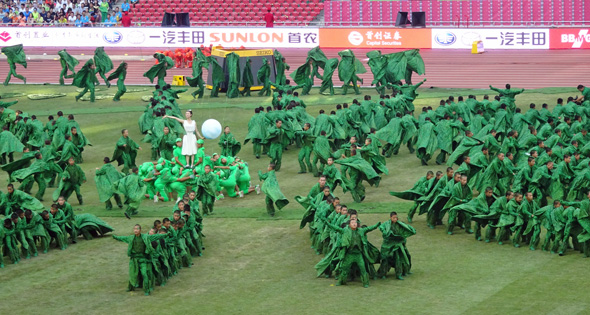 A beautiful girl in a white flowing gown rose from the center of the green leaves. She was carrying a sphere (globe?) and began singing a song of happiness and welcoming. The words were translated into English and French on the stadium video boards and it was clear this Girl in White wanted peace throughout the land, to write on white paper and to be with her friends and run, run, run. 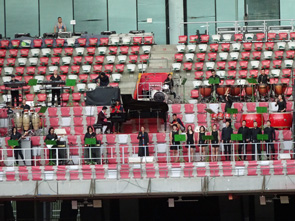 Except she wasn't singing at all. It was a choir (in green) and an orchestra and professional singers in the seating area behind the tree sculpture.

Friends from around the world came to run with the girl on a track that mysteriously appeared on the infield. The green leaves morphed into a hedge lining the track. 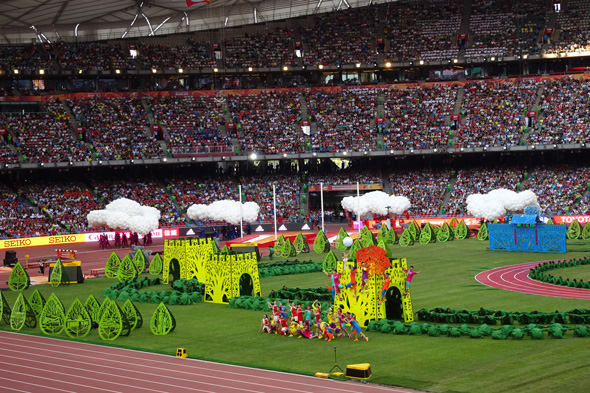 The friends ran around China. First stop was the Great Wall. 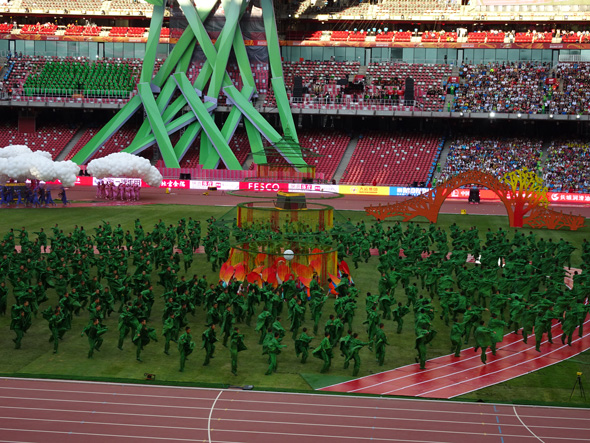 Next, a pagoda rose from the grass... 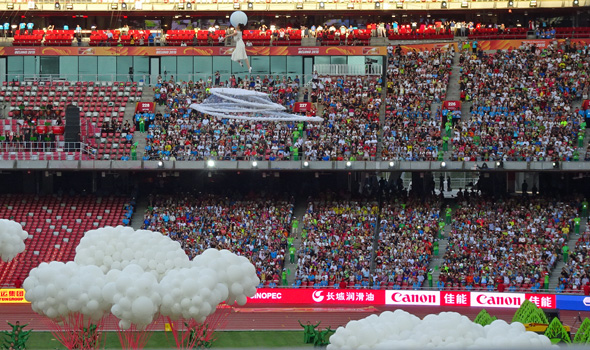 .. and the Lady in White rose from the pagoda, soared above the clouds and disappeared. 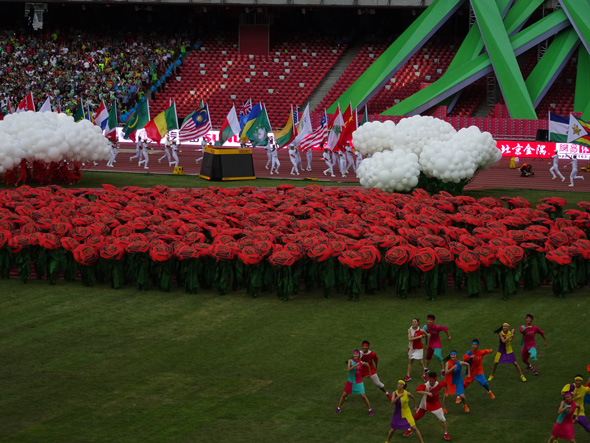 The green leaves suddenly bloomed into hundreds of red roses! 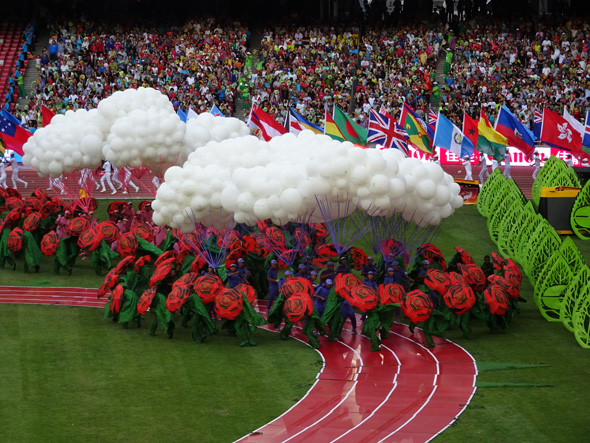 It was an amazing sight to see. 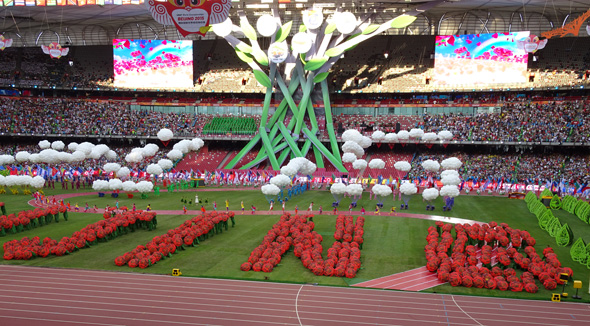 The flowers spelled-out BEIJING and the clouds formed into "2015"

And the Opening Ceremonies were over. It was pretty spectacular, and I didn't even mention the fireworks.

Back to the Track: After four events, Brianne Theisen-Eaton sits in 4th place in the heptathlon, six points away from third and quite a bit behind first. (There is a link to full results at the bottom of this page.) Fans love the men's 100m and the heats were fast tonight. We wached Usain Bolt, Tyson Gay, Justin Gatlin, Asafa Powell, Travon Bromell and Mike Rogers move up to the next round. Something tells me this is going to be good.

Another great day of Track & Field. We walked back to our hotel and fell into our beds - exhausted. 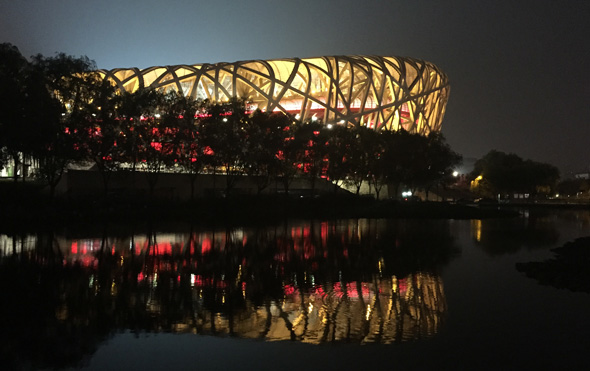 Something I found interesting today:
There is a notice on the faucet in our bathroom warning to not drink the water. Next to the sign are two drinking glasses.

Until my next update, I remain, your Day One correspondent.