Beijing, China:  Though I did not want to miss the women's steeplechase heats (you know I'm kidding, right?), I decided to join our friends Paul and Eric when they invited me to go to the Silk Market with them. I was even able to convince Dave to come along. 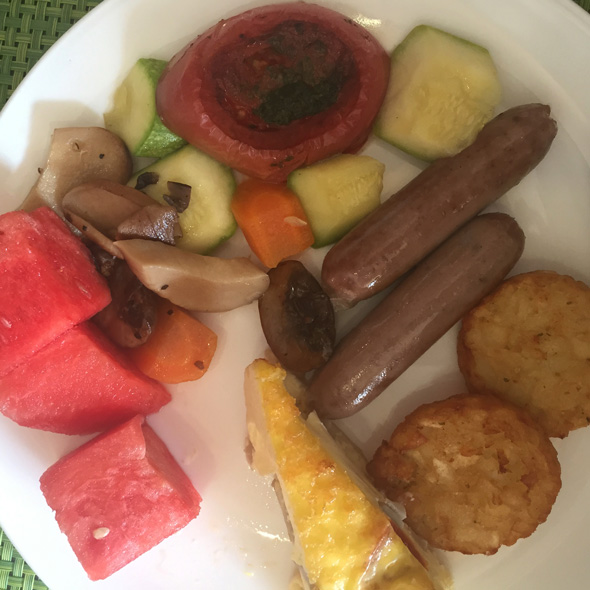 The one meal we can be sure of eating each day is breakfast. The buffet is served in the hotel dining room and is included with our rent. The first day we went down for coffee, but realized after the first day we may not find food again for hours. Now we take advantage of the opportunity to get some grub. Other than dinner with Vin and Elizabeth the night of our arrival and the daily breakfast buffet at the hotel, we had not sat down to a proper meal since arriving. 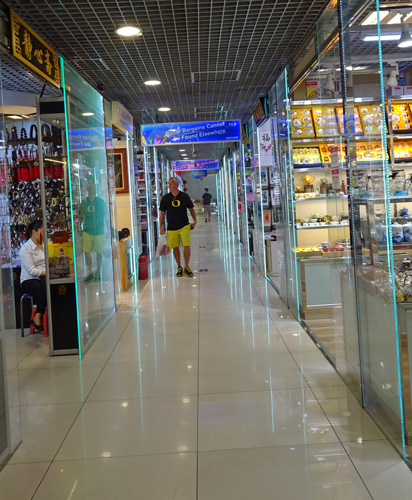 Four of us piled into a taxi for the 30 minute drive to the Silk Market downtown Beijing. This market is a multi-store shopping mall, stuffed with teeny tourist shops and stalls vending all sorts of Chinese crafts, pearls, jade, tailors, silk and cashmere scarves, toys, jewelry, carvings, junk, dresses, silk purses, clothing, gifts, crap and porcelain. Haggling is required. Prices are not that cheap and you may never know if you were ripped-off or not, but I figure if I bought a large silk-or-silkish cosmetic bag with two interior zip pockets for $8 and it was really only valued at $4, did I really get ripped-off by $4, or did I buy a beautiful cosmetics bag for only $8? 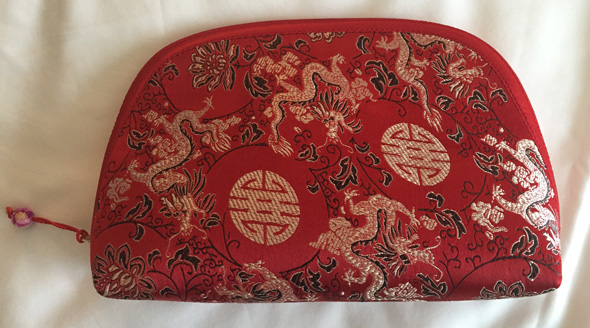 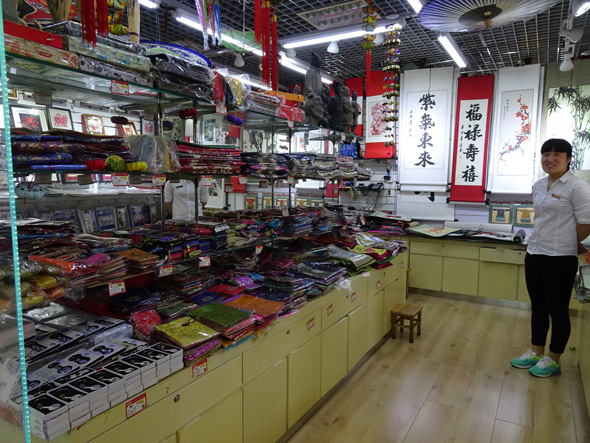 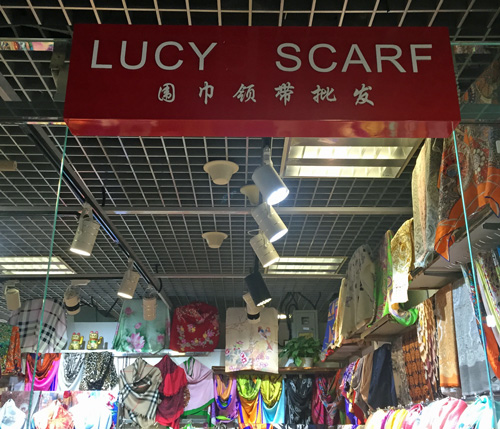 You know I had to go in here, right? 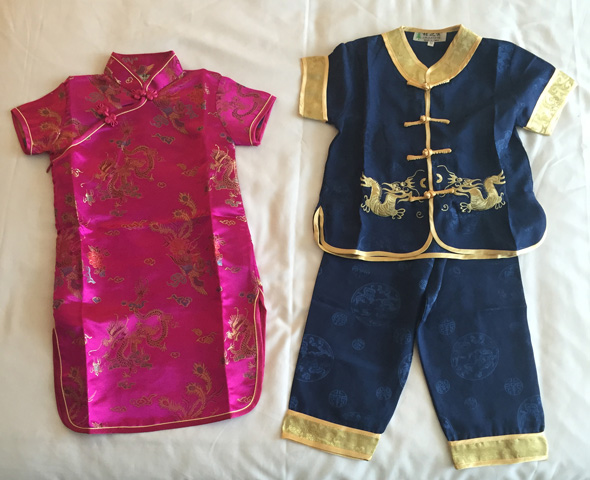 My work is done here

Everyone found great gifts for their wife and kids at the Silk Market. The market was filled today with tourists in Beijing for the track meet - we even saw Mo Farah shopping. 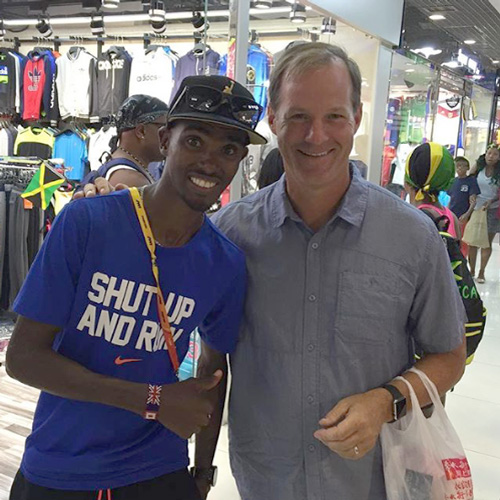 Mo Farah and Paul at the Silk Market

Just as we were leaving the shops, we noticed a pizza place, so decided to sit down for an actual meal, and were served a very decent cheese pie: 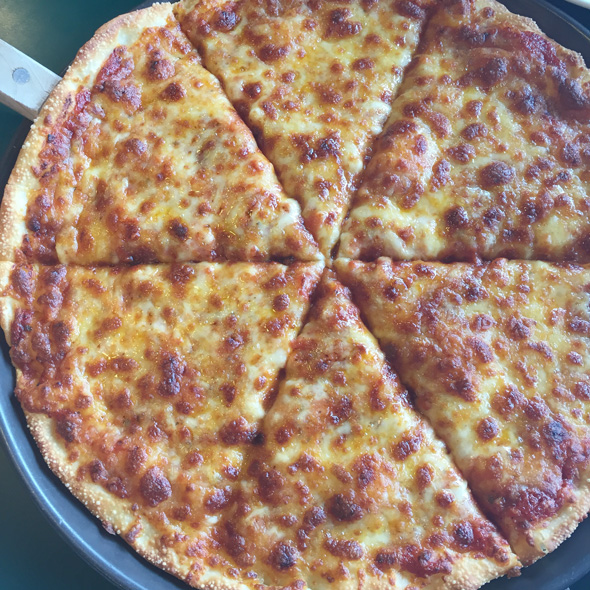 Our Uber ride back to the hotel was double the price we paid for the taxi ride from the hotel. It was worth the extra $7 splurge (yes, $7 out and $14 back; 4 people) because while the taxi was teeny, smoky and not air conditioned, the Uber car was a luxurious new Buick SUV with leather seats, no one had ever smoked in the vehicle, and the air conditioner was set to "arctic". The Uber driver arrived 3 minutes after our request. Though he did not speak a word of English, we had a business card from our hotel so didn't need to speak to each other at all - except to give him gracious thanks for an enjoyable ride.

Next we went for a walk around the neighborhood to find a convenience store to buy bottled water. We found a nice - and quite large - supermarket, and spent about an hour cruising up and down the aisles exploring. (Sorry, but this is one of our most favorite things to do when in a foreign country. Try it - you will learn so much.) 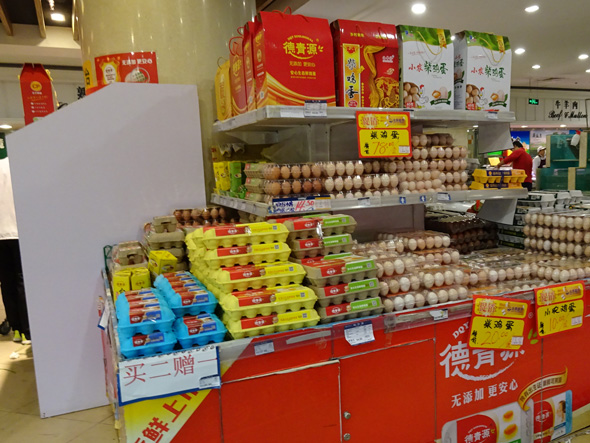 I think the USA is the only country to refrigerate eggs 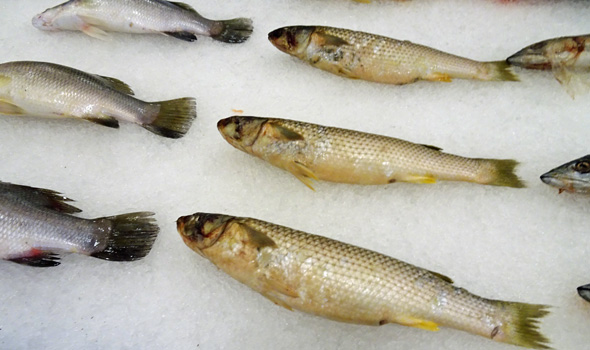 So much fresh fish - whole fish on ice, trimmed and wrapped fillets, and even a lot of still-swimming varieties. 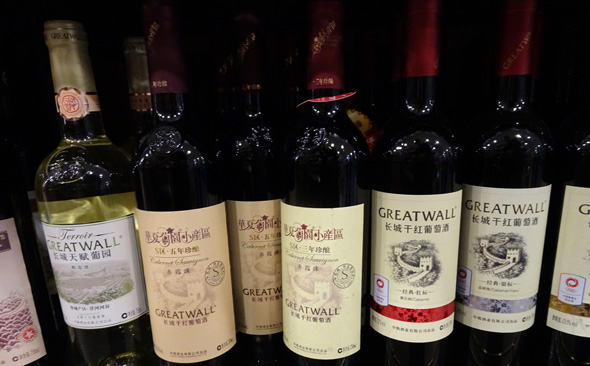 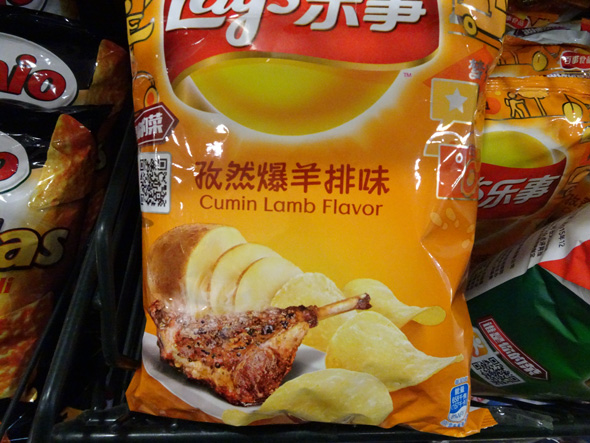 The fruits and vegetables were gorgeous and we saw nothing much out of the ordinary, except massive peaches (grown in China) and gorgeous cherries grown in Washington State. Most of the produce was pre-packaged and wrapped in plastic (ala Trader Joe).

On the walk back to the hotel, we stumbled upon a Starbucks (which we later realized is visible from our hotel room window) and had an iced mocha in honor of Lenny. 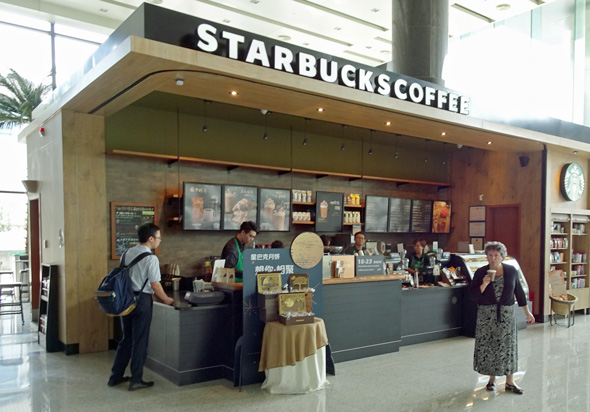 I probably go to Starbucks once a year at home - but look at me in Beijing.

Our two drinks costs nearly as much as our Uber ride!

It was an adventurous and very fun morning with our friends -  one I'm sure we will all remember for quite some time. We found a few cute gifts, saw a bit of the city, had an actual meal and found a nearby shop to buy drinks and snacks.

We were at the stadium in time to get a seat before the races started. More great heats were in store tonight, with five finals: men's pole vault and steeplechase and women's triple jump, 10000m and 100m final. 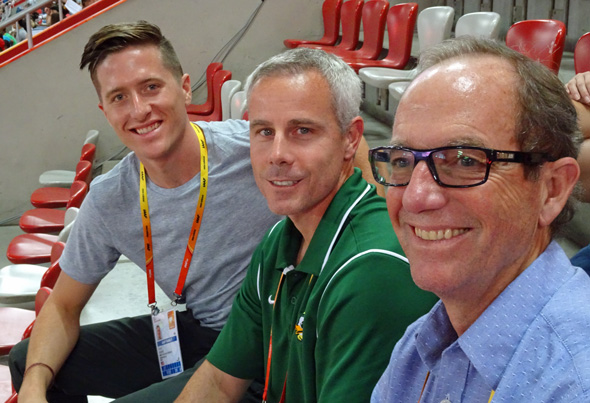 Calvin, Eric and DT get ready to watch the races 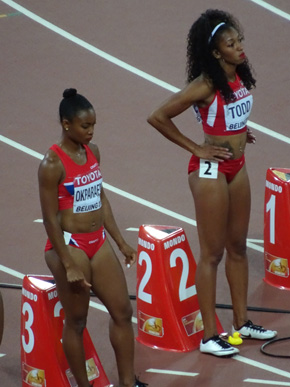 Neither Gardner or Todd advanced from their heats 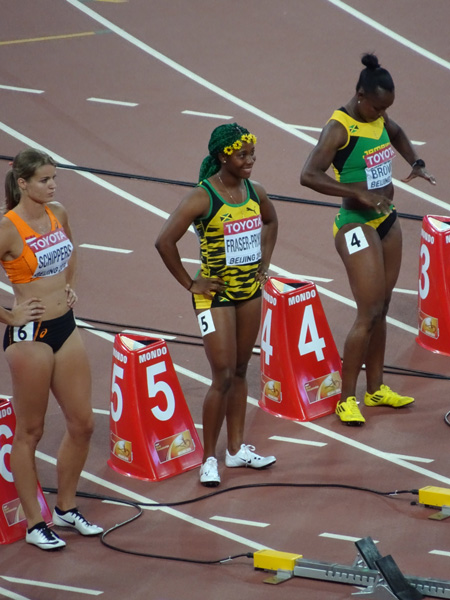 Shelly-Ann Frasier-Pryce (with green & yellow for Jamaica, not the Ducks)
won the gold medal with a new stadium record.

It was an unpredictable evening. We really thought Evan Jager could win the steeplechase. He finished sixth. Many basically guaranteed Renaud Lavillenie would set a world record in the pole vault. He finished third. We hoped our friend, Sally Kipyego, would win the 10000m. Sally finished 5th.

Nothing was going right, but the organizers had girls playing the drums during the 10000m to jazz-up the crowd. Is it just me, but does it seem the girls are wearing Dallas Cowboy Cheerleader costumes? 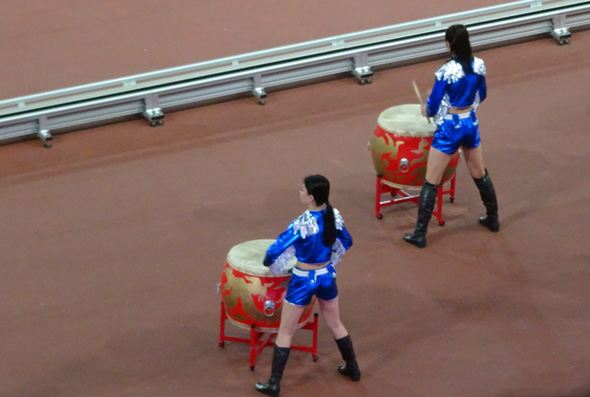 Until my next update, I remain, your shopped-out correspondent.

Ducks v The World: With no Ducks in a final, the Peking Duck team did not improve today and slipped down to 13th place overall. But just wait. The USA is presently in the lead with 69 points. Kenya made a huge surge tonight with so many points from the steeple (top 4!) and 10000m.
Official Placing Table

Something I found interesting today: The price differences. Two iced coffees costing nearly the same as a luxury car hire for four people? The average worker in Beijing makes about $1000 per month.