Portland, Oregon:  Today's program, for the last day of competition, was short and sweet, but Mother Nature couldn't hold the rain any longer. It was pouring in Portland. No matter. The rain did not deter the crowds, and it was, after all, an indoor track meet.

We arrived with the kids and filed into our seats... except people were already sitting in our assigned/paid-for seats. We had eight seats and fans were seated in the last two. They were wearing French team uniforms, but I could not see their faces, but politely motioned to scoot and held up two fingers, the international hand signal indicating we needed them to scoot down two seats. Imagine my surprise, when the face of the pole vault gold medalist appeared behind the first claim jumper. 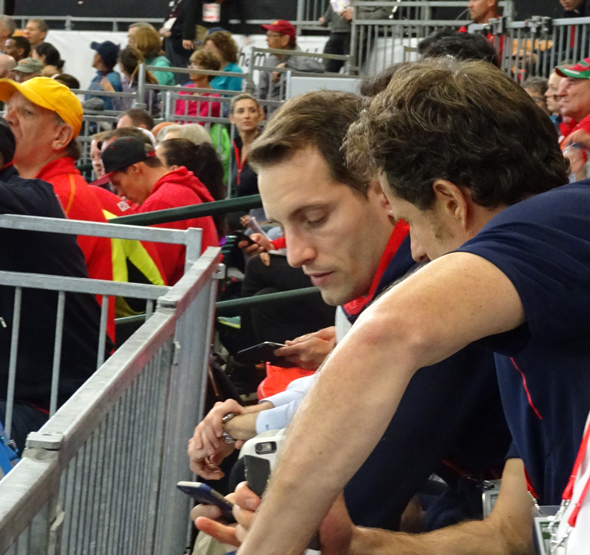 I wasn't being unreasonable. It was my seat. 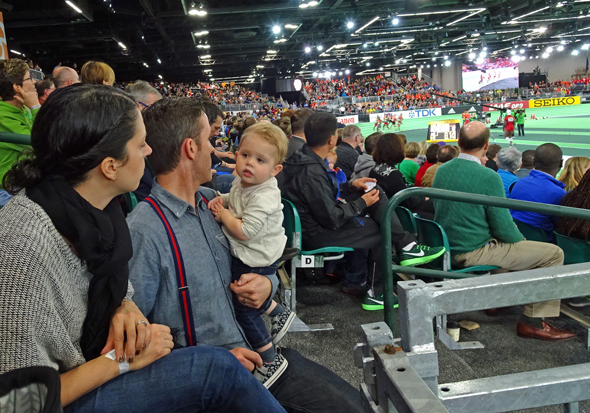 Lisa, Mike and Lucy at the World Championships

Lucy be like: Did Bubbe really just kick Lavillenie out of that seat?

Three of my favorite races were held this evening - 3000m for women and men and the men's 1500 final.

My girl-crush, Genzebe Dibaba (Ethiopia) won the 3000m title in 8:47. This woman is amazing, super talented and super beautiful with a radiant smile. (Plus, how much fun is it to say Da-ba-ba?) Her countrywoman, Meseret Defar was second in 8:54 and American Shannon Rowbury won the bronze medal in 8:55. A very good race that had the crowd standing and cheering for the last mile. 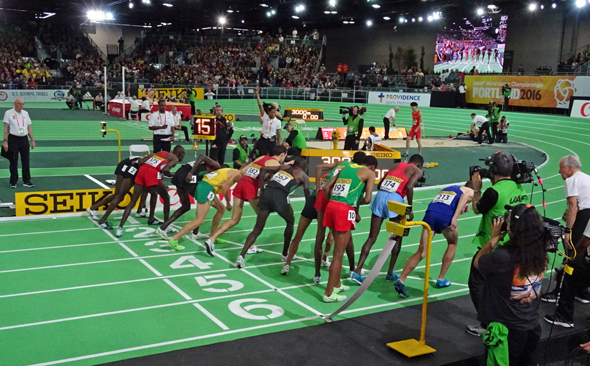 The men's 3000m final was won in an equally-exciting photo finish. Yomif Kejelche (Ethiopia) won in 7:57.21, Ryan Hill (USA) was second in 7:57.39 and Augustine Kiprono Choge (Kenya) was third in 7:57.43. A very very very close race. American Paul Chelimo was 7th in 8 minutes. Yep, the men run this distance 50 seconds faster than the women.

And then it was time for the most anticipated race of the evening (for me and 7000 of my closest friends) - the men's 1500m final. Local favorite and Duck-alum, Matthew Centrowitz had made the final and it was going to be a tough race. He had only 8+ laps to prove he was the fastest in the world.

Well, I don't even need to finish this column, do I?

It was a super brilliant last lap, chasing-down New Zealand's Nick Willis and shaking-off Jakub Holusa of The Czech Republic. Magical. Here is a video of the race (with a cameo photo-bomb of Lucy, Renee, Kevin and me - in a hot pink sweater - in the lower right corner of the screen at the 4:45 minute of the video):

It was a masterful and gutsy race for young Mr. Centrowitz. So happy for him! 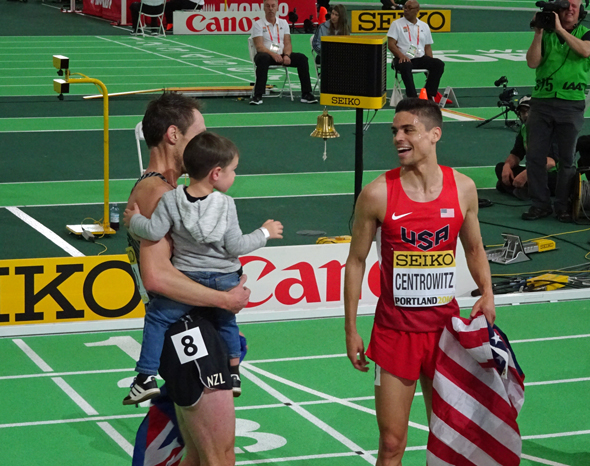 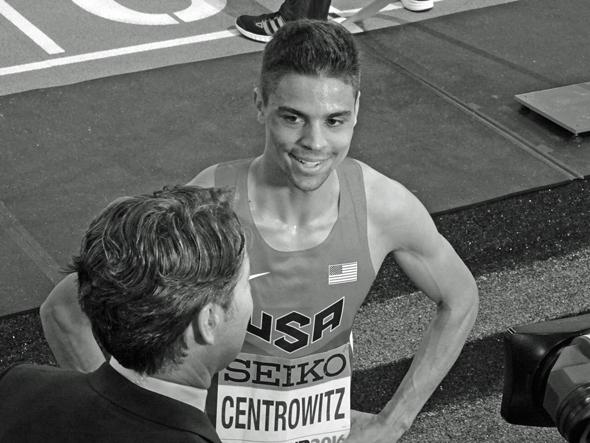 Centrowitz talking with the press after his victory

After the relays, the meet was over and we once-again went to Pioneer Courthouse Square for the final medal ceremonies. Even Mother Nature was so busy watching the pomp, she forgot to push the "rain" button and her drizzle fizzled. 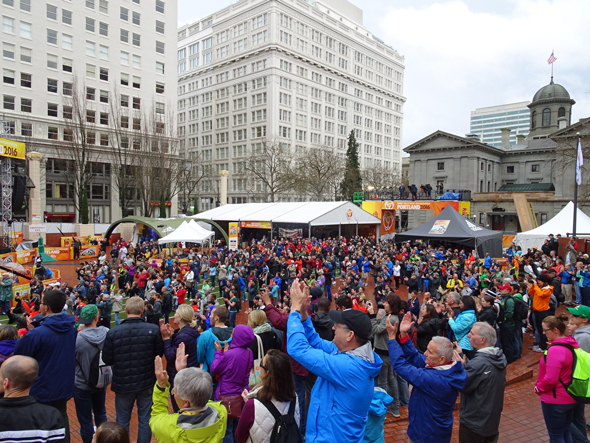 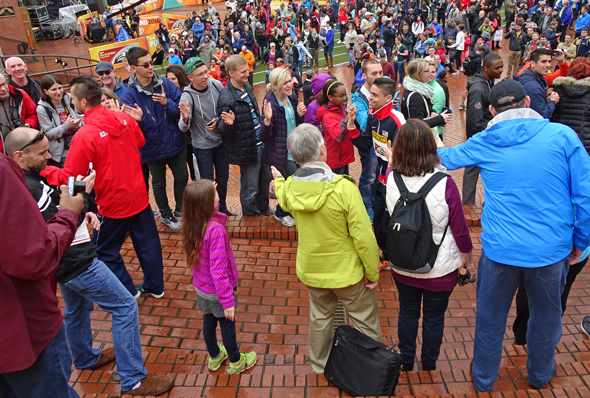 Medalists are led up a long brick ramp to the victory podium.
Here young Mr. Centrowitz high-fives the crowd and he runs the gauntlet. 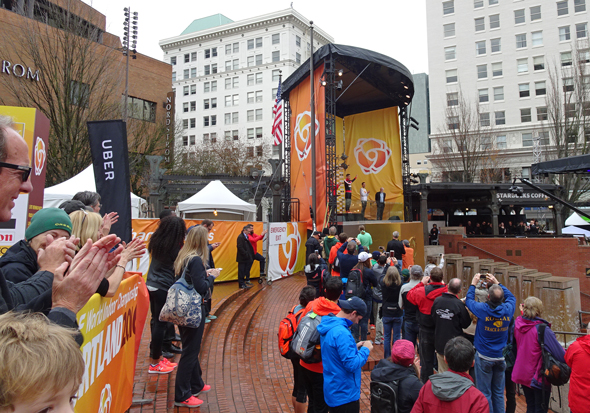 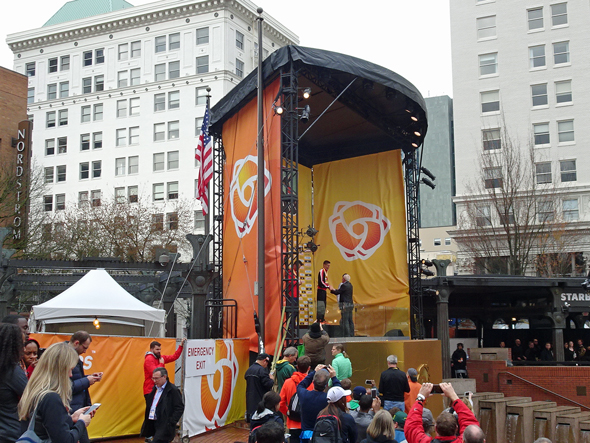 What a day and what an awesome track meet. All we heard were great things about the organization of the event. Every seat was sold and Pioneer Courthouse Square was packed each evening for the medal ceremonies.

What a great meet for America. We seriously cleaned up with 23 medals (13 won by women, 10 by men - way to go, Ladies!). The USA had 13 gold, 6 silver and four bronze medals. Second place was Ethiopia with 5 medals, France and Jamaica trailed with four and three, respectively.

What a great meet for Oregon Duck alumni. Three GOLD medals - Ashton Eaton and Brianne Theisen-Eaton in the multi-events and Matthew Centrowitz in the 1500m. Amazing job, Ducklings!

Speaking of the Ducks... we had to rush home after the medal ceremonies to watch the men's basketball team beat St Joe's (on TV), to advance to the Sweet Sixteen. Oregon will face Duke on Thursday. GO DUCKS!