Indio, California:  It was so wonderful hosting our kids and their friends during the World Championships, but as soon as the meet was over, everyone began flying back to Los Angeles. Lenny flew back Sunday evening so he could go to work Monday morning. Mike, Kevin and Rina departed for work and school. Lisa and the kids lingered one more day, before flying back to Los Angeles early evening. Leo was feeling a bit under the weather, but rallied after an afternoon with Bubbe. (Bubba had to go back to the Oregon Convention Center and Pioneer Courthouse Square. Werk.) 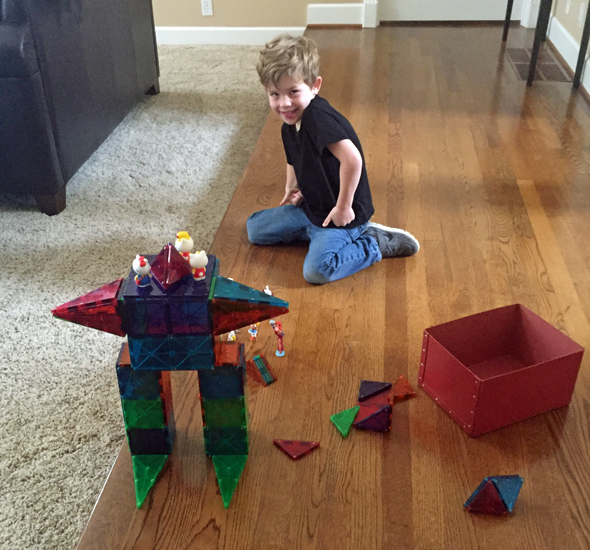 Magna-Tiles before Bubba went downtown. After the kids left and Dave returned, we spent the rest of the evening packing to return to the desert and organizing the house for several-more-months away. Traffic to Portland International Airport was no problem this morning. We both scored TSA pre-check and sailed through security. We found a table at the airline lounge, boarded our flight, were offered chicken (instead of the usual pork) sausage on the in-flight breakfast and found ourselves in Palm Spring before noon. I ordered an Uber car on my phone and didn't have to wait even one minute for our ride. Our luck began to change when the wind kicked-up and we faced a full-on sandstorm on I-10 in Palm Desert. Not quite white-out conditions, but a dangerous driving situation, even in a gianormous Chevy Suburban. Upon our return to The Motorcoach Country Club, we found the RV and Casita in fine shape - just super dusty from the storm. The cilantro had bolted and the poor tomatoes were being blown around quite a bit in the gale. I stopped to give the veggies a little extra water and then heard DT from the motorhome window: Our. Fridge. Is. Dead. Oh Sweet Reader, I will not torture you with the details of a completely warm fridge and a completely thawed freezer. All I can say is, "Thank goodness for my vacuum-sealing compulsion" or this motorhome would be stinking into the next county. I hadn't left much in the fridge for my 10-day absence. Major loss? All that lemon juice I had frozen... and okay, my jar of frozen schmaltz I was saving for Passover. The side-by-side refrigerator had power. The lights and temperature gauges were working (freezer read 71 degrees; fridge 81). We have no idea what or when this happened. Two (of the three) roof air conditioners had been left on at 85 degrees, so it did not get over 85 degrees in our motorhome while we were away. Confusion. But the fridge was only a part of our troubles. We had no power at any plug-in socket, and we had no hot water. Curiouser and Curiouser. I placed a call to our tech, Brian Van De Walker, and he set us straight on the GFI/circuit-breaker thingy that I always forget to remember. (Never again: this time I made a note and taped it to the circuit box cover.) We could get hot water by using the diesel burner on our Aqua-Hot system. If all else failed, we always have a full bath in the casita (with hot water!) and an under-counter fridge outside. Dave (dirty chores always seem to fall on him) removed all the gross stuff from the fridge and freezer and made a trip down to the dumpster (where residents are usually not allowed, but this was an emergency) and I began pulling every shelf and bin out of the refrigerator and washing them in HOT soapy water. A call was placed to an emergency fridge repair company and they promised to have a repairman here between 2-4p. At just after two o'clock, said repairman did show up and found the coils clean (yeah, me!) and thinks it is probably a component issue and not the expensive compressor... but cannot find out until he can get behind the refrigerator... but was a bit confused as to how to remove a massive residential JennAir fridge from a built-in enclosure - especially since the unit sits a good six-inches above the kitchen floor level. I again phoned Brian and he spoke to the repairman, explaining the removal procedure and Brian told me about a fellow-camper in this resort with a six-inch-high pallet and several roller tubes - that can be used in this situation - sliding the fridge out onto the pallet, then away from the wall - so the rear of the unit can be seen. I called the gentleman with the pallet and he said - no kidding - he had just sold his lot... but maybe his magical pallet was still behind the shed? I hopped in my car, with the patient young repairman and drove to the just-sold parcel only to meet the new owner and learn he had sent the pallet and roller tubes to the dump a few days prior. This is where I began looking over my shoulder for a hidden camera crew, convinced DT and I had been pranked. Or punked. Hello? Hello? Is anyone still here? Is anyone still reading this sad boring tale? The repair guy seemed intrigued by this absurd problem and promised to return in a day... or... soon... and he would figure out a pallet/roller situation and bring an assistant. Dave called the Aqua-Hot service guy and he will be here soon as well. Word spread quickly and friends and neighbors stopped by to offer help or fridge space and Lovely Colleen brought a cold bottle of wine. There was nothing else to do but finish cleaning the defunct fridge and unpack from our trip to Portland. No food to cook, our clubhouse is closed on Tuesday, too late for Happy Hour, so we decided on Stuft Pizza. Seeing the crowds waiting outside Stuft Pizza in Old Town La Quinta, we remembered (dolt!) it was Spring Break and there was no way we would score a table anywhere anytime soon. On a whim, Dave let me out of the car in front of Solono Bistro in Old Town and I secured the last table in the restaurant! Our luck was changing? Yes, and no. They were out of Tanqueray gin and they were out of rose wine. But they were not out of bass served over parmesan risotto and asparagus, topped with a tangerine beurre blanc. 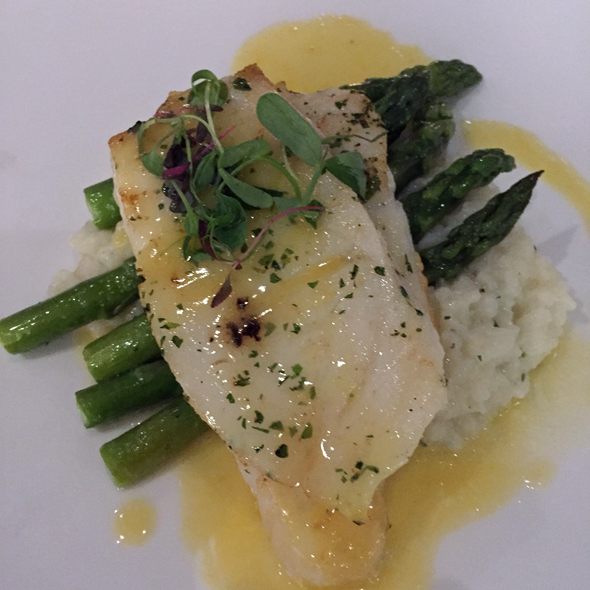 The dish was simply perfect and I finished my plate. This tasty perfection did not lift my spirits much. I still feel like this: 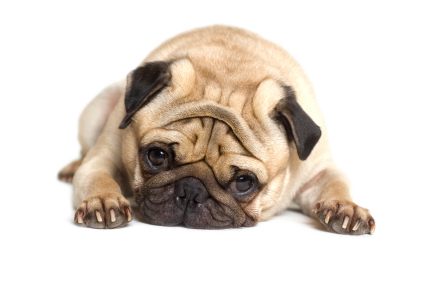 Until my next update, I remain, your bad luck correspondent.