Indio, California: Two days until lift-off, so we are rushing around a bit, trying to finish-up last minute tasks, visiting with friends, dining at our favorite restaurants and we are starting to rearrange items inside cabinets for "travel mode". This morning we had a meeting with our contractor to go over a few things. I had an idea that a brick wall in the dining area would be pretty. This brick wall idea would be practically genius if only I had a bottomless bag of cash.

Flash-back to Friday... while driving over to see the kids for the weekend, we needed gas for the Honda, so pulled-over about fifteen miles east of Los Angeles in Rosemead. There was something very interesting about Rosemead. Most of the shop signs were in Chinese. Every person we saw was Asian. Well, isn't this fascinating, I thought. (Don't forget, we lived several years in Taiwan.) And why was I so familiar with the name "Rosemead"? Where had I heard that name before? Then it hit me - Sriracha Sauce is brewed in Rosemead. Rosemead is famous! So here is where I clue you in on one of my favorite "recipes" that isn't a recipe at all. It is Sriracha Sauce squirted over cucumber chunks. Blazing hot, yet refreshing from the cold cucumber. Try it! 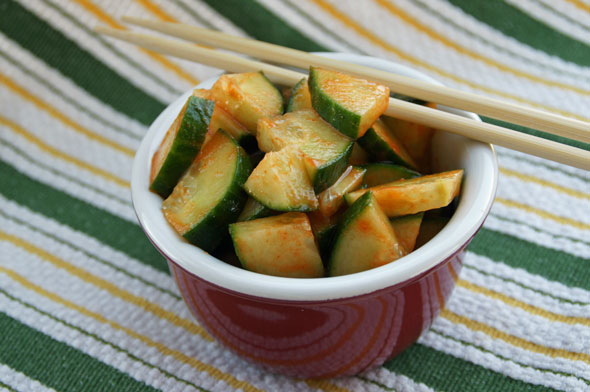 (I know, I know, I outta write a cookbook with these gourmet thoughts. I could also include a recipe that requires chocolate sauce poured over vanilla ice cream. Peanut butter on toast? RV easy!)

After rushing around this morning, we headed out on errands. Our first stop was Tacos Gonzalez.

No, she didn't eat tacos again, did she? 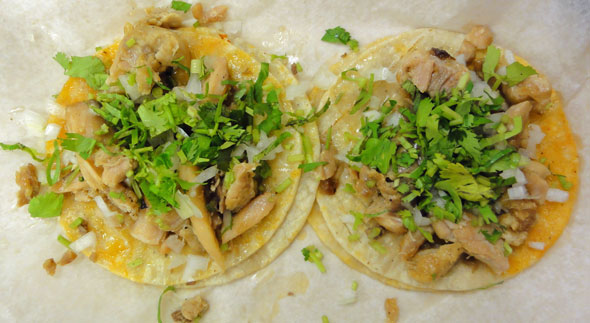 Yes, I did and if I can find time, I will go there tomorrow and repeat my $2.58 order - two chicken tacos.

Next we hit-up Costco to buy adult beverages. Adult beverages from Costco in California are practically free compared to adult beverages in Oregon. In Oregon imbibers must still visit a state-sanctioned package store and prices are ridiculously high. It seems so strange that one of our most progressive states still vends booze like it is a week after Prohibition. Costco (and supermarkets) in Oregon can only sell beer/wine - no liquor. After ringing up our booze, the Costco clerk asked if we were going to Oregon. Were we that obvious? She said, this time of year, there is a steady stream of snowbirding Oregonians headed home with their cars/RV packed with mega-jugs of low-cost liquor from Costco.

I dropped DT off at the RV so he could load our "tailgating supplies" into the RV basement and I went out to fetch the over-nighted wiper blades. They were the wrong blades. They would not fit our wipers. This was not good. The RV supply store felt bad (no charge to us) so sent us over to two nearby truck stops. No luck. I returned empty-handed to the RV and started Googling and learned a 28-inch replacement will probably do the trick until we can find the proper 31-inch blade. The 28-inch blades just happen to be in-stock at a nearby The Wal-Mart - and they are $20, not $77! DT will get them in the morning. There went three hours of my life I can never get back.

Captain Jim and Mary came by this evening to take us on one last cruise around the resort. This kind act really lifted my mood after all the frustration of wiper shopping! Ahoy! After our sail was over, we all went to dinner in Old Town La Quinta at Stuft Pizza. Thank you Dear Friends! 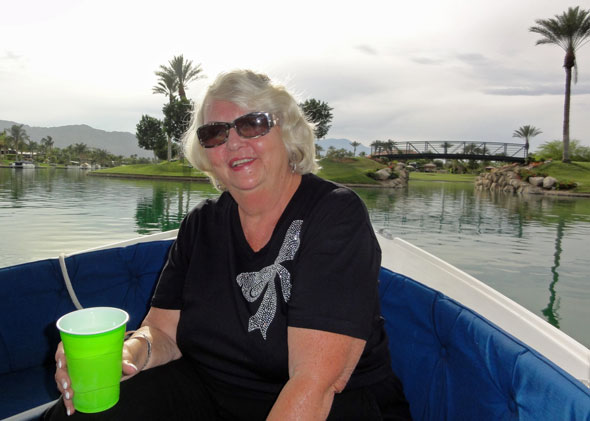 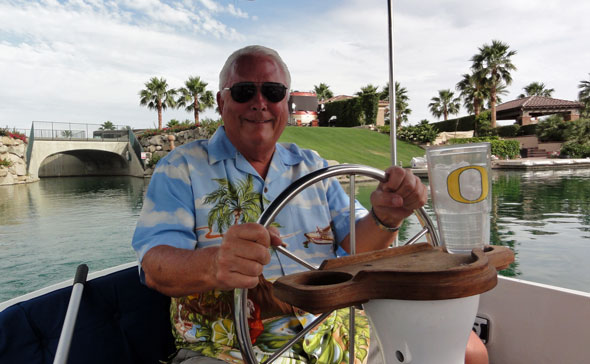 It's Been a Lovely Cruise!
(Jimmy Buffett's song is safe and hosted by RVGoddess.com.) 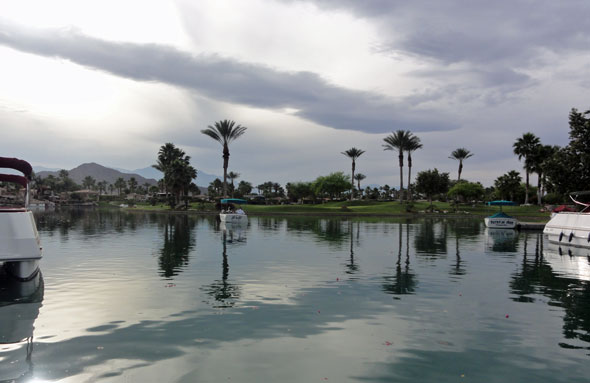 Wouldn't you know it? We have our motorhome washed and have no windscreen wipers and look at those clouds. It is raining in Los Angeles this evening. I just know we are going to be next. 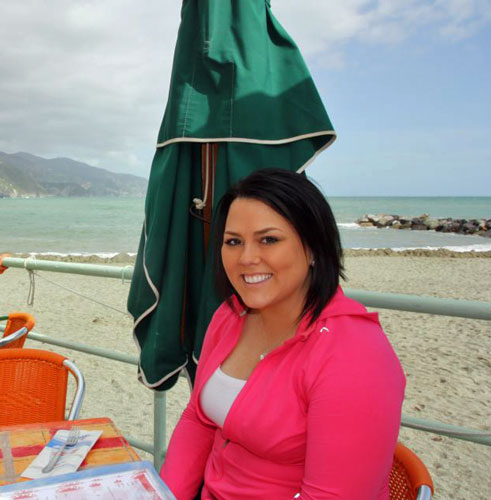 But the weather looks pretty nice in Italy - and so does Cory! Cory and Mary are having marvelous time and are headed to Rome next.

Until my next update, I remain, your wiperless correspondent.

SLOGGER REPORT:  I am suffering a bit from shin splint pain, so am taking a few days off, before it becomes serious.