Windy, With a Chance of Thievery

Los Angeles, California:  There has been a lot going on since my Monday update. Dave is starting to feel a little better. He still can't walk very well or very far, but his pain is easing. He will continue with therapy twice-per-week throughout December.

The Big News around our resort is two golf carts were stolen! Amazing tales too. Tuesday, around 9p, a thief was able to get into the resort (climbed over a boundary wall?), then used a master (?) key (the owner had not left the key in the cart) to start a golf cart parked in a driveway in front of a motorhome, and drive it straight out the front gate of our RV park. Some nerve! (To get into the resort, a guard must open the gate to admit cars, but to get out, the gates open automatically when a vehicle approaches.) Not only did the thief get a nice cart, he also stole his/hers golf clubs strapped to the back of the cart. 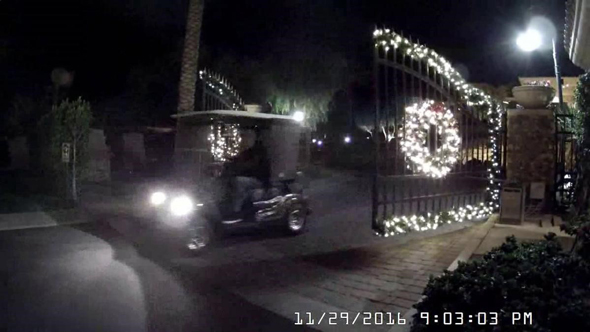 Where did he go? What will he do with the cart? Strip it down and resell?

Word spread and we all received an emergency email from management. Everyone was on full alert and owners were double-checking they did not have their keys in the ignition, their golf carts were insured, and most everyone took their golf clubs off their carts Wednesday.

But would you believe - in broad daylight Thursday - the thief (probably the same guy) stole another cart?! One o'clock in the afternoon! You can believe it and you can believe security has been stepped-up and the gate no longer automatically opens for departing vehicles.

A good wake up call. We have become too comfortable in our perfect happy bubble. A few years ago the resort went through a period of exterior television thefts. Everyone switched to televisions that popped-out of cabinets and/or were seriously bolted-down. This put an abrupt end to thefts and there has been little theft or petty crime inside our resort for years - and then two golf carts in one week!

Be careful out there people and watch your stuff. This is "the season" for front porch package theft - have your packages delivered to your office or a neighbor who will be home.

Speaking of "the season"... I will be publishing my 2016 holiday gift guide next week!

Last night we celebrated Mary's (of Captain Jim and Mary fame) birthday. They brought the steaks! We had so much fun - champagne, steak, au gratin potatoes, Oregon Salad and cupcakes from a local bakery for dessert. 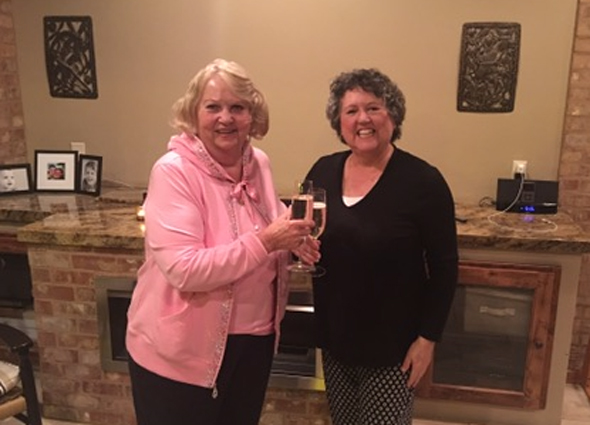 Pretty in Pink: the Birthday Girl toasts with me

We may have stayed up past our bedtimes.

This morning we woke to gale-force winds. Our Poor Little Grand Dawg - 13 pounds of him - had no idea what to do in the wind. He looked hilarious. His ringlets were blown absolutely straight, and Reese appeared to be all Yorkshire Terrier. (We think he is half Yorkie and half mini poodle, but we don't know - he is a rescue.)

We had plans to drive to Los Angeles this afternoon to spend the weekend and return Reese to his family. It was time for Reese to go home, so we decided to drive through the wind storm. Before we left, I (DT can't lift more than a beer at this point) moved all the patio furniture inside the covered pavilion. I drove the golf cart into the covered pavilion as well, and dropped all the protective screen walls. Or... I "battened down the hatches" before we left Indio.

The wind was bad only about the first 40 miles, then we settled down into our usual 2-hour drive to Lisa and Lenny's house. However, when we arrived to Los Angeles, the Santa Ana winds were seriously blowing. Palm fronds littered city streets and their back garden was filled with tree branches that had fallen from neighbor's trees. Even later in the evening, as I type this at 9p, the house is shaking and we can hear branches hitting the roof and side of the house.

Again, be careful out there people!

Until my next update, I remain, your blustery correspondent.