Indio, California:  I would love to be reporting on our latest round of golf or hike in Joshua Tree, but alas, there is no activity in this trailer. While My Driver showed slight improvement on his pinched nerve situation last week, with the doctor/therapy offices closed Wednesday-to-Sunday for the Thanksgiving holiday, his progress stalled.

Mary and Captain Jim hosted us Saturday afternoon as we watched the Oregon Ducks lose to the Stinkin' Beavers (in Corvallis) for the first time in nine years. The Beavers now have possession of the Platypus Trophy. Never mind the Ducks have won the Civil War nine years in a row, we will have to hear about this victory all year from our Beaver friends. Oregon leads the series overall: 63 wins to 46 (plus 10 ties) in one of the oldest college rivalry games in the United States. I can't even remember the last time the Oregon Ducks haven't gone to a bowl game, but am pleased our winter plans will not be dictated by a football game. YES! 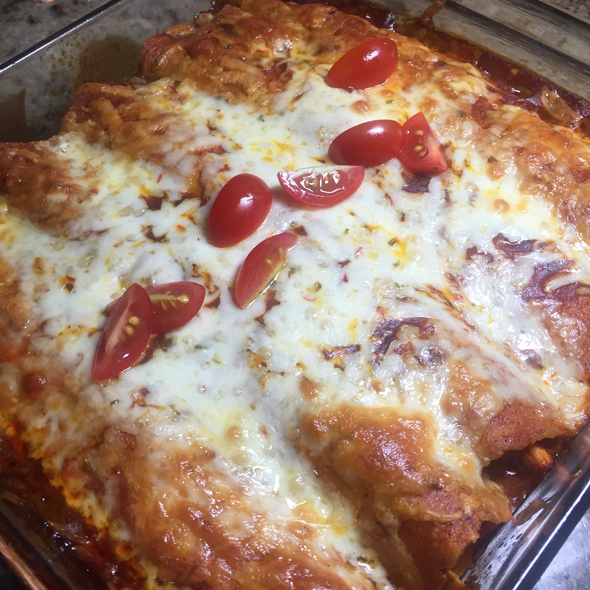 After the loss, I served turkey enchiladas. Super easy! I just stuffed softened corn tortillas with (left-over Thanksgiving) shredded turkey, poured a can of Hatch's red enchilada sauce over, sprinkled cheese on top and baked.

Lisa and her family returned from their Thanksgiving trip Saturday afternoon and we decided to drive to Los Angeles Sunday to return Our Grand-Dawg and spend the day with the grandkids. What a terrible mistake. First, the weather was miserable with high winds, dark clouds and even (much desired) rain. Apparently half of Los Angeles had been in Palm Springs for the Thanksgiving holiday and they all decided to return to LA Sunday morning. We are so stupid. Have we no memory of this? Has Dave been retired so long we have forgotten about holiday schedules?

Initially, the GPS told us the drive would take three hours (it is usually a two hour trek), and we were fine with that, understanding holiday traffic and all. What we failed to remember: one of the largest outlet malls in the country is about 25 miles west of Palm Springs. Everyone from LA (who was not in Palm Springs for the holiday), was going to the mall to save 50% on cashmere sweaters or toasters or some other coveted prize.

With each creeping mile, the ETA on the GPS rose. Five hours was the estimated travel time to Los Angeles...  meaning when we arrived to Lisa's house, we would have to turn around immediately to return to our motorhome (doctor appointments to keep Monday morning). We reached the outlet mall in 2.5 hours, so turned around and came home. 40 miles in 2.5 hours!

We have plans to spend next weekend in Los Angeles with the kids, so it looks like we will be keeping Reese in Indio with us another week. He likes it here. It is quiet. He gets a lot of walks. His Bubbe gives him sautéed ground turkey or chicken each day. Or maybe a little leftover turkey from our Thanksgiving feast.

We returned in plenty of time Sunday to get pizza dough started. More cheese - and roasted red peppers and slivered Kalamata olives. 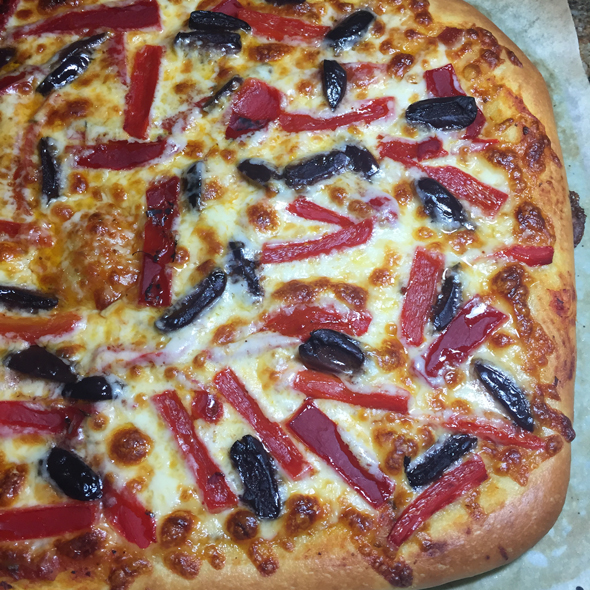 We have made a big change in our internet service. When we bought this motorhome eight years ago, we had a satellite dish installed for internet. Eight years ago, not many RV parks had wifi and if they did have wifi, it was spotty-at-best, shared by everyone and definitely not secure. Now internet is common everywhere and service is more reliable. If service is spotty, we can just use our mobile phones as a hotspot. The satellite internet is reliable and secure, but slow and expensive.

I bit the bullet last week and moved into modern times. Thanks to wonderful advice from Captain Jim, I ordered a one-piece modem/wifi router, plugged it into the RV park cable outlet in our casita, called the cable company and we now have high-speed internet. Super high speed, and for a fraction of what we paid for satellite - not to mention the satellite connection was too slow to allow live streaming of Netflix, etc., on our televisions. (In a week, we have already watched all ten episodes of The Crown!)

The rooftop satellite internet service has only been suspended. The dish and equipment will remain on/in our motorhome. When we hit the road again, I will reinstate the service.

Or I won't be able to update this blog.

Until my next update, I remain, your high-speed correspondent.

« Thanksgiving 2016 Windy, With a Chance of Thievery »