Windy Day on the Oregon Coast

So, in true "okay, maybe I am a weenie" fashion, I didn't run at all. DT slogged around a bit and said he was actually running in place at one point, so just came back to the RV. It was so windy, our RV felt like we were on the sea, instead of parked at the sea.

Why are we here? I guess the truth about the purpose of this trip is not really important because we RVers rarely need a reason to hop in our rigs and hit the road to enjoy a few days away... but we are away this week because our internet dish needed to be deployed and locked on to a satellite (floating somewhere over the Galapagos Islands), all day today, in order for an important software update. Good enough reason for us to head over to the beach for a few days.

We would just be having a lot more fun if the dang wind would stop blowing. Our golf clubs remain in the back of the Honda. 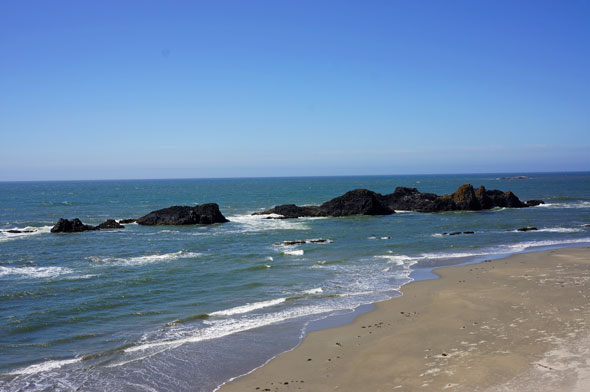 It was a good day for a drive. There wasn't a cloud in the sky and the temperatures rose to a very balmy (for the Oregon Coast in July) 64 degrees. 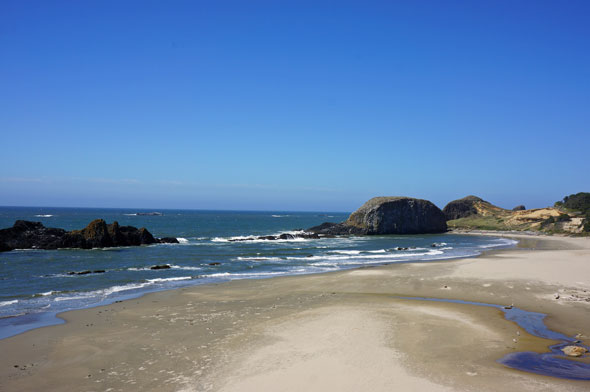 We stopped at Seal Rock to take a few photos and I couldn't get back in the car fast enough. Even on a warm day, the wind felt like ice. 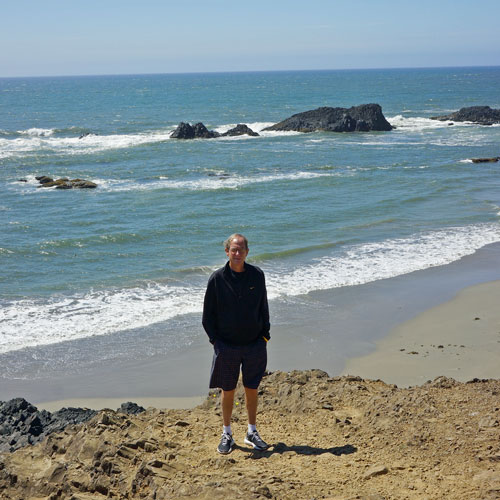 DT wanted to try a restaurant in Yachats (pronounced yaw-hots by the way), about twenty miles south of Newport on Highway 101. 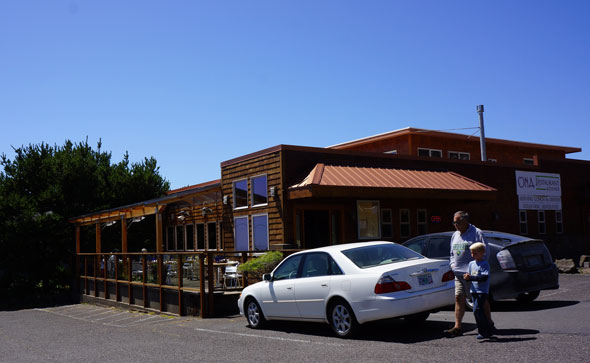 Ona Restaurant sits on a pretty little bay and if you crane your neck enough, there is actually an ocean view from the outside deck (which is perfectly situated to act as a wind break). Ona means shellfish in Chinook, so maybe this wasn't the best place for this kinda-Kosher/allergic-to-shellfish girl for lunch... but My Driver knew I would just order fish and chips anyway. 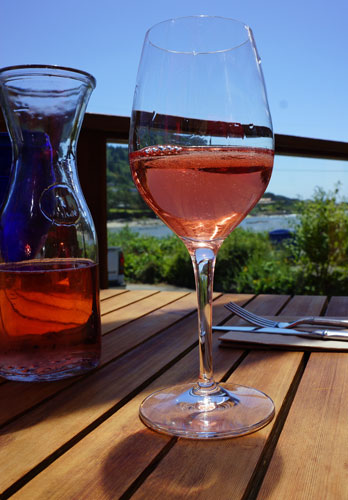 First, we split a half-carafe of Spendrift Cellars Pinot Noir Rose. Spendrift is a small sustainable Oregon vineyard in Philomath. 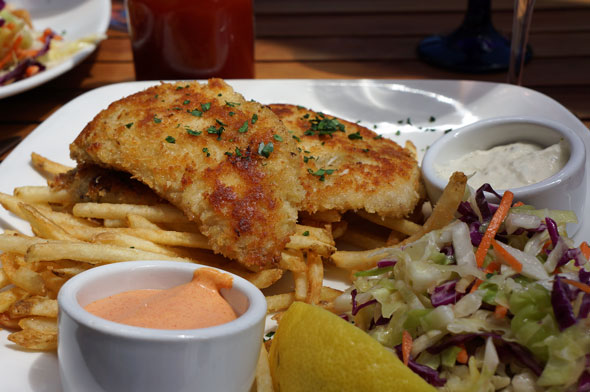 And I did order fish & chips. Remember all those pretty Rockfish from my column yesterday? Yep. I ate one of 'em today. Ona uses Rockfish in their fish & chips (as do many local restaurants). A very delicious fish and not endangered. (Did you know a200 year old rockfish was caught last week in Alaska?)

After lunch, we returned to Newport and drove down to the wharf area and poked-around the docks. I don't know what is biting and what is not biting, but the docks were packed with fishing boats. Not many boats were out fishing. 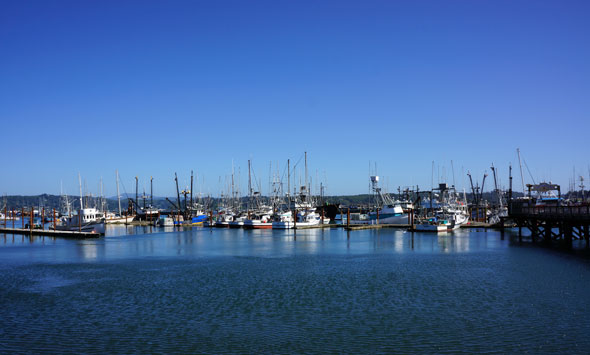 Isn't that just the prettiest little port? Could the water or sky be bluer? We met fellow RVers (from Washington) who were trying their luck with a few crab pots. 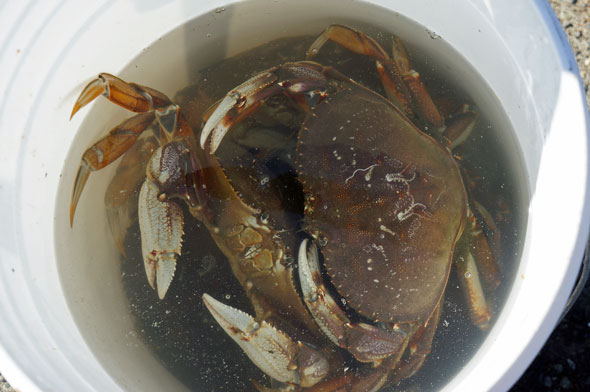 This group of friends had over 8 crab in less than two hours. They were using salmon heads/tails as bait. 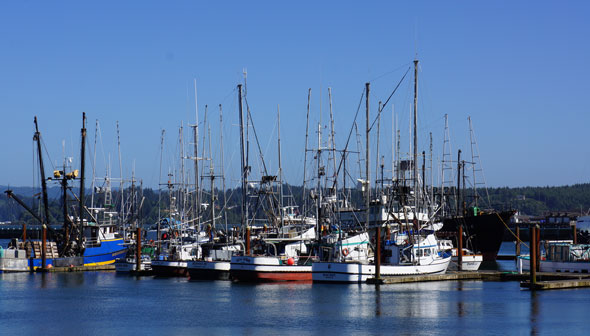 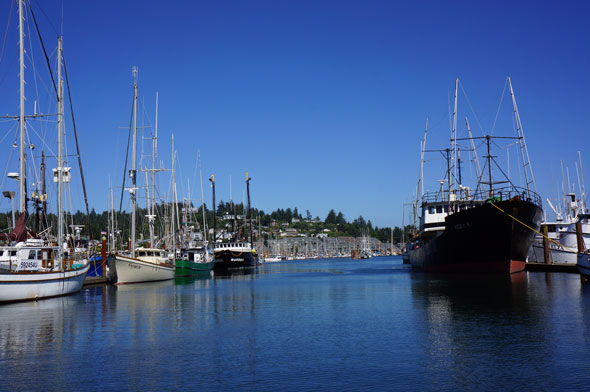 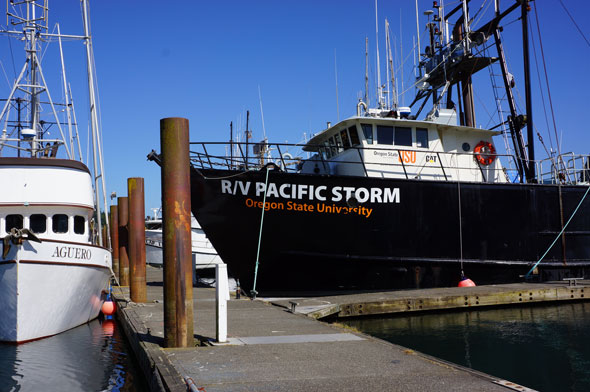 Come on, Beavs... buy some paint

And I couldn't help but post a little artsy-ish photo of the Historic Yaquina Bay Bridge from the east. 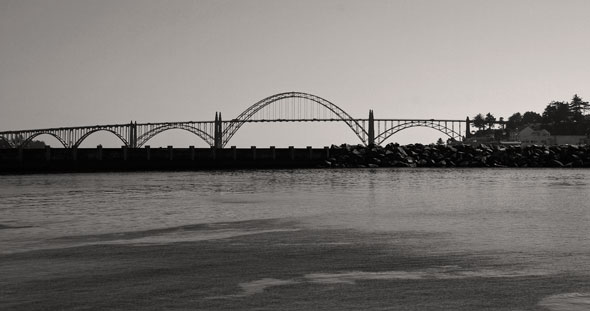 Just next to our RV resort is the Hatfield Marine Science Center, named after theSenator from the Great State of Oregon and operated by some school in Corvallis. The Science Center has a very interesting new monument on display outside the entrance. 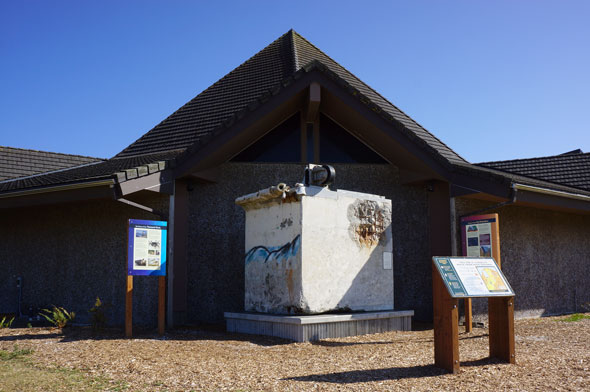 A corner of a far-flung dock from Japan

Do you remember, a year ago when we visited Newport to see a Japanese fishing dockthat had washed ashore from the terrible March 2011 Tohoku Earthquake? The dock was part of a commercial fishing port in Misawa, Japan and had taken just-over a year to cross the Pacific Ocean after being tossed out to sea in the devastating tsunami. It washed-up on Agate Beach (just north of Newport, Oregon) on 5 June 2012 - covered with 118 species of foreign mussels, barnacles and critters unwanted in these parts. 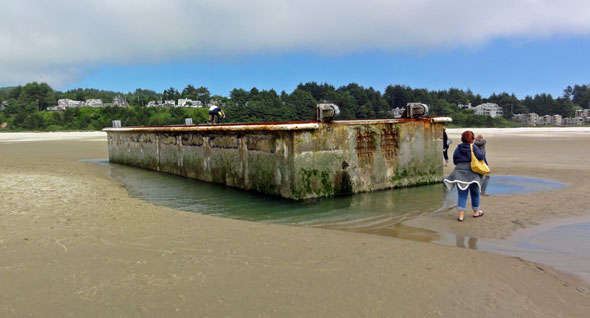 The dock was cleaned (can you say "blow torch"?) and destroyed, but a corner is now in front of the Hatfield Marine Science Center to act as a reminder, a memorial and maybe a warning of the Power of the Pacific.

There is a 9+ earthquake about every 500 years in the ocean plates just west of Oregon. Be careful out there, people. Tsunami evacuation routes are now posted on every street corner on Oregon coastal towns. Pay attention!

At eight o'clock we headed over to Local Ocean Seafoods, a restaurant recommended by Captain Jim and Mary on our visit to Newport last year. We tried our best to not order the exact same thing we ordered last time, but caved and had to ordered the raw tune poke (po-kay). 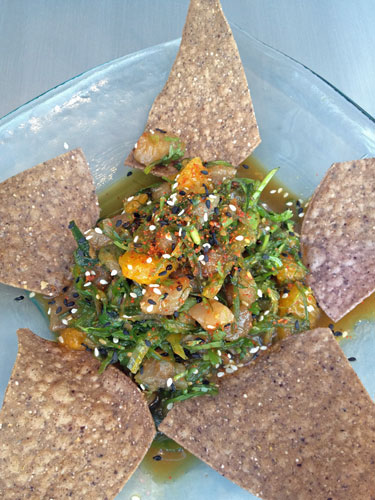 I ordered the salmon - also just off the boat - but they actually served TWO fillets and how could I even eat ONE fillet? Ridiculous amount of food. DT and I shared and we still brought home enough food for a family of four. Dear American Restaurants: STOP THIS! 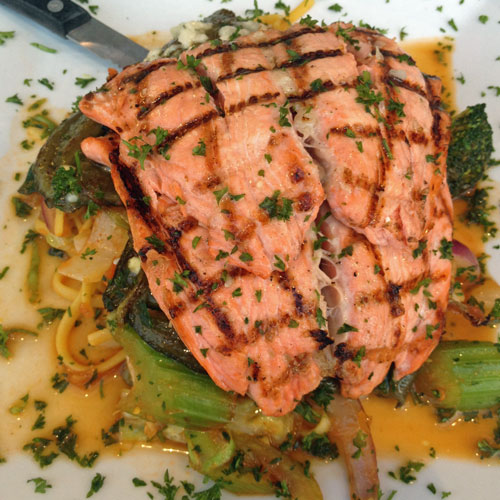 Maybe difficult to see, but there are actually two salmon fillets,
hovering over poblano chiles, veggies and linguini.

Everyone in our family was on the Pacific Shore today! Isn't that fun? Lenny and Lisa took Leo to the beach. He just loved playing in the sand, and even though the water was cold, Leo wanted to go wade in the waves. 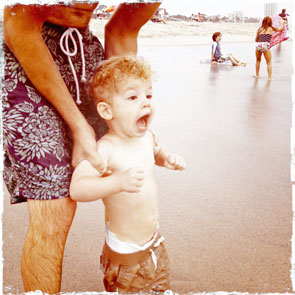 Lisa said Leo is shouting, "yeah" in the right photo. He loved going in the cold water, over and over again.

« Oregon Coast Aquarium Back to Portland »