Newport, Oregon: (Note to Readers: I have posted an unreasonable amount of photography on this page. I apologize in advance.) After a good sleep, DT and I had forgotten about the detours of the past two days. We started our day with runs from the marina out to the end of the jetty. This is a great run - and at the end of the jetty you can hop down to the beach to get more mileage or hop on the miles-long bike path and jog forever. We each ran for about 45 minutes - and the wind was terrible. Blowing from the north, and we were running east/west, so we didn't catch a break either way. 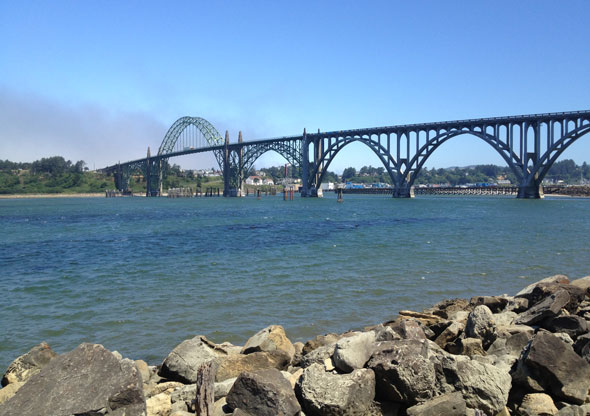 Looking east from the jetty towards Newport.
The fog eventually burned-off... or was blown-away by the wind. 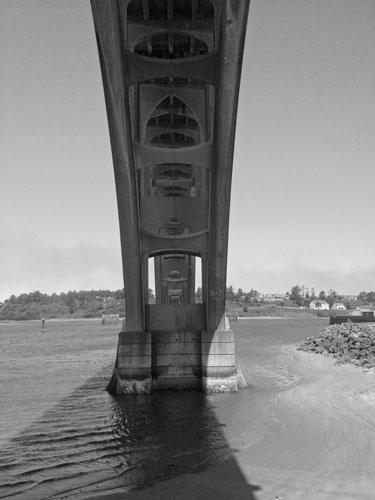 DT beat me back to the RV, and I returned to find him with his head inside the engine compartment with a bottle of spray cleaner and a roll of paper towels. Not a good sign.

Dave said he noticed something resembling oil splatters on the back of the motorhome, so he opened the engine compartment to find the cap had not be replaced after our lube/oil/filter at Cummins Northwest last month! What? We had driven the bus 250 miles since June 4th. We think the drive straight up and down I-5 must not have sloshed the engine oil around enough so we would see any spillage, but the drive yesterday over the coast range is a doozy and the goo had spewed everywhere. What a mess. (DT actually phoned Cummins Northwest to complain, and DT never complains.)

Here is the oddest thing. The cap to the oil reservoir was sitting inside the engine compartment. Just sitting there like someone had placed it there two minutes prior. How in the world did that thing not jiggle-off down the road somewhere? 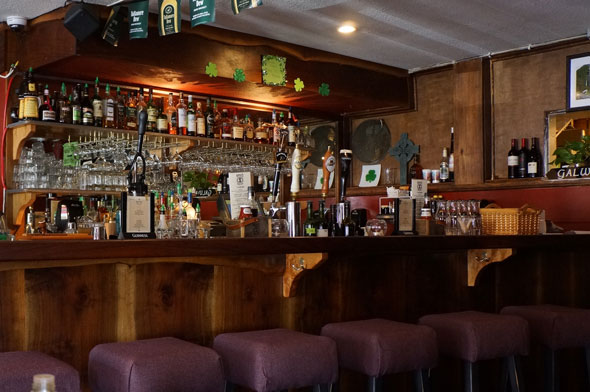 Time for lunch. As usual, we headed to Nana's Irish Pub for lunch. Consistently good pub grub, but I didn't feel like steak and kidney pie (or anything heavy) after just running. My Driver consented to splitting a tuna melt with me. 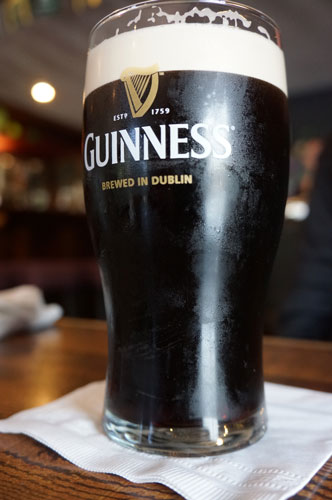 He also gave me a sip of his Guinness 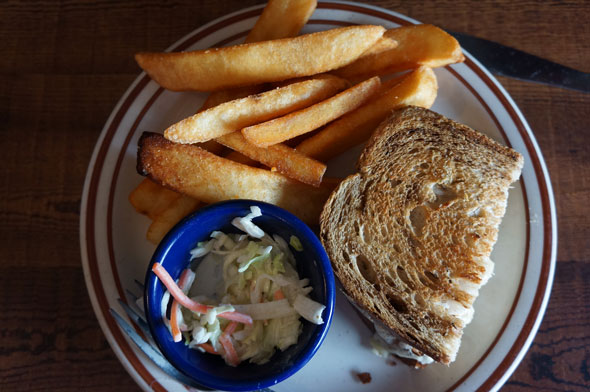 Next is the obligatory drive along the shore in Newport. 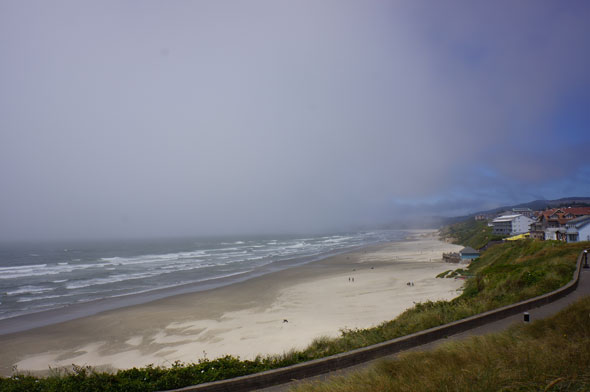 Panorama from the north side of the bay 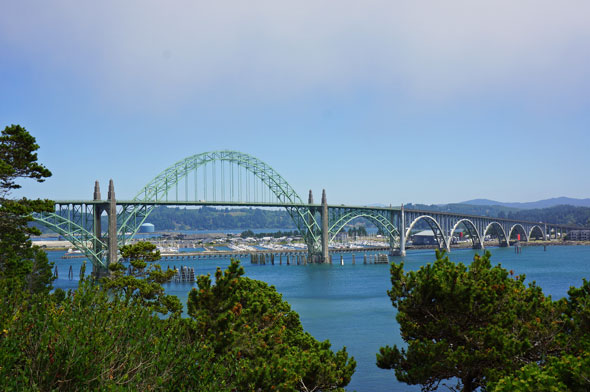 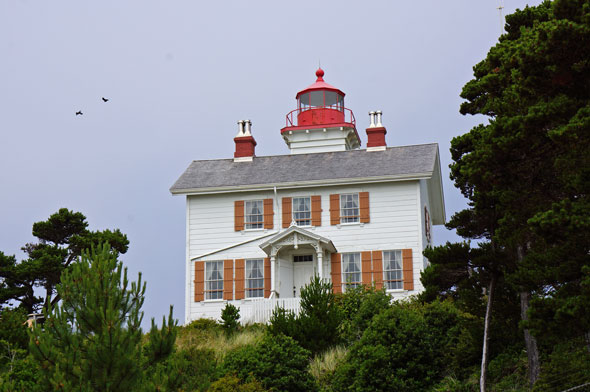 We spent the afternoon at the Oregon Coast Aquarium - across the road from the RV park. The sun was shining and there are enough structures at the facility to block most of the wind. 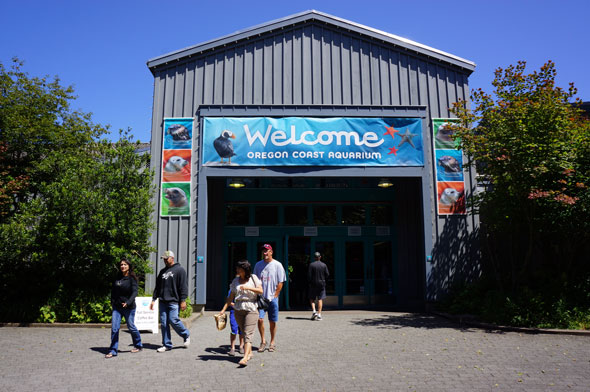 The best thing (to me) about the Oregon Coast Aquarium is they only feature local creatures. No tropical fish. No crocodiles. Local Only. 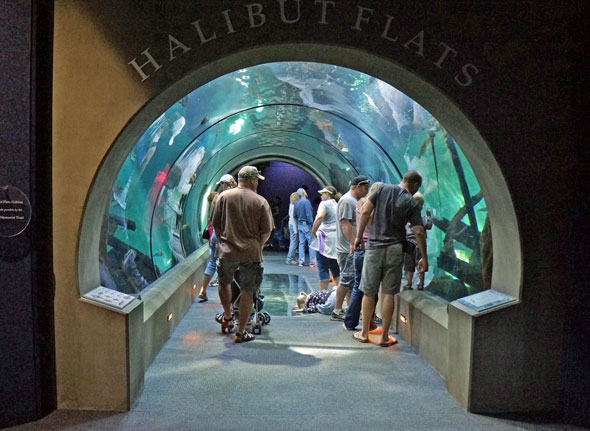 The most popular attraction at the aquarium is the Passages of the Deep area, where visitors can walk through three large clear tubes and be completely surrounded on all sides by sea creatures. Each area features a different realm of the ocean - a reef, a flat sandy bottom area and the open ocean. 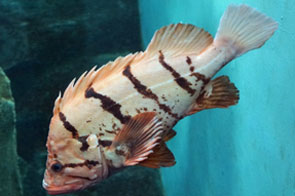 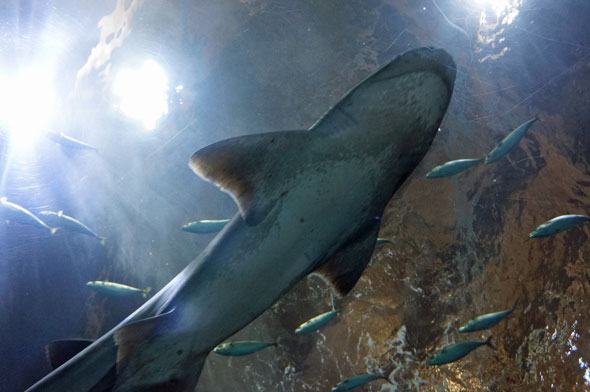 Imagine a shark swimming over your head! 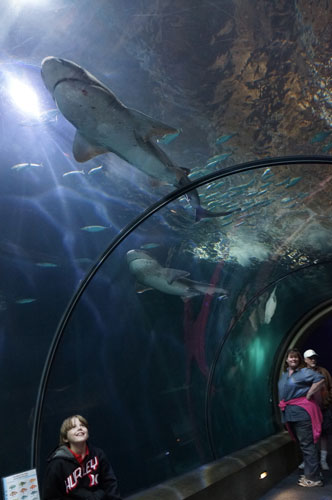 A walk-in aviary has a nice selection of nesting shores birds, including Tufted Puffins: 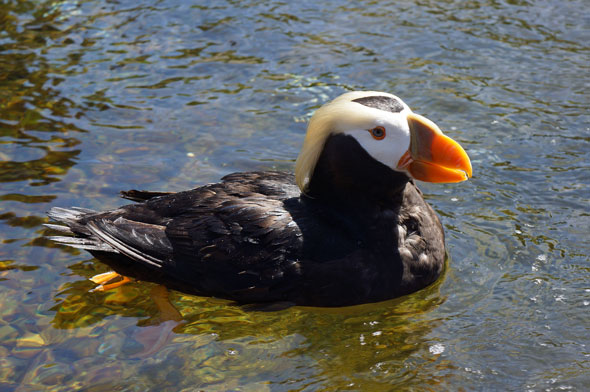 The Oregon Coast Aquarium also has sea lions, sea otters, and seals, with educational talks and animal feedings throughout the day. 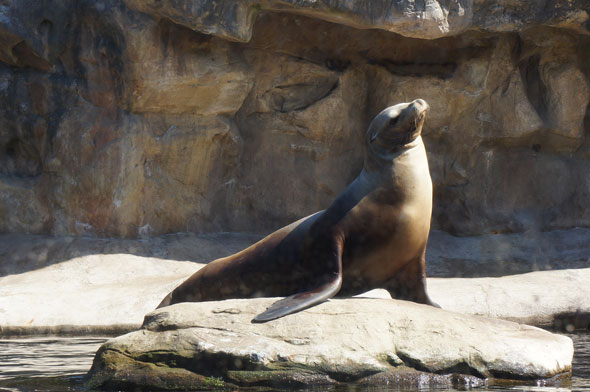 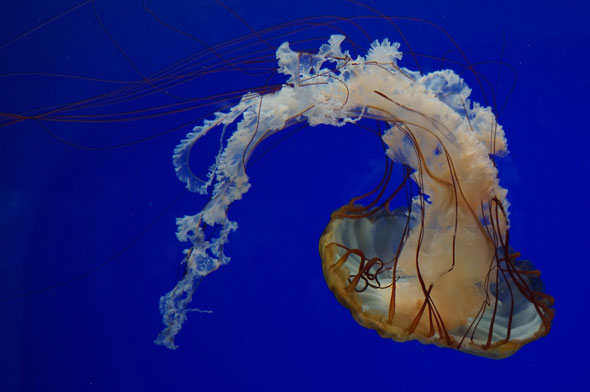 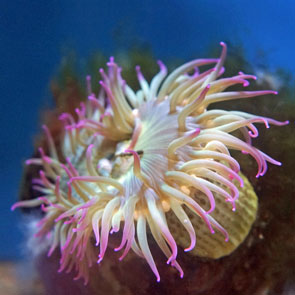 Underside of a starfish - and five pretty anemones 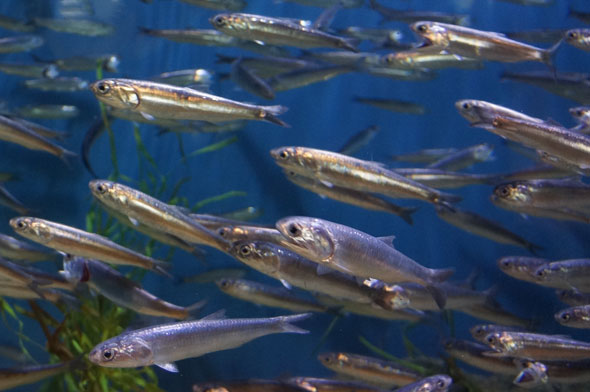 For dinner, we decided to break from our usual Newport tradition and try a new place. (BTW: be brought only breakfast foods along in our fridge for this trip.) Tonight we tried Savory Cafe & Pizzeria, a casual pizza place in Nye Beach. We split a half-Caesar salad (is that a 1/4 of a Caesar?) and ordered a pizza. Luckily we saw a pizza delivered to an adjacent table before we ordered. A large pizza was about the size of a car tire, so we ordered a "personal" size and could only eat half. Granted, we are wimps. 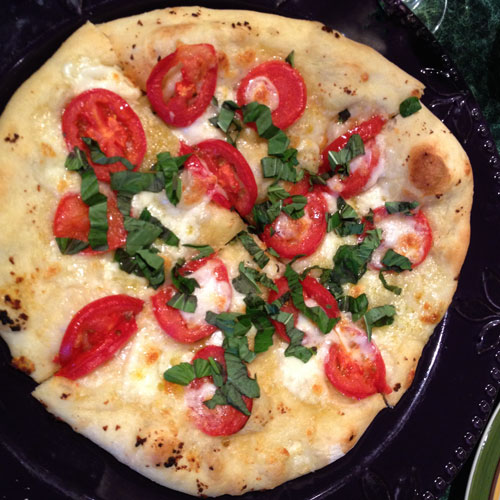 The owners, both on-site this evening, lived in Hawaii for years. The walls are decorated with photos of their successful Marlin fishing expeditions, the service is personal, friendly and the pizza was quite fine.

« Rhymes with Chitty Windy Day on the Oregon Coast »