Indio, California: Thursday was spent traveling south on Highway 99. The smoke seemed to really settle into the south end of the San Joaquin Valley (as pollution always does). The air quality complaining seems so trite, considering the sad news coming from Paradise, California. The death count climbs nearly as fast as the still-missing list.

How will America respond to this tragedy?

After exiting Highway 99 in Bakersfield, pointing our motorhome east on Highway 58, and refueling, we pulled-over for the night at the Orange Grove RV Park. Nothing fancy, yet still $50. We stay here time-after-time. Long pull-through sites make it possible to over-night without having to unhitch a tow vehicle. The campground has full-service campsites with free Wi-Fi, laundry, cable, fitness center, recycling, and free donuts and coffee in the lobby every morning. Also - in season - campers are allowed to pick ripe oranges from the trees dotting every site.

I sautéed several leaves of the rainbow chard Gina picked for us, along with onion, garlic, celery, and carrots. The veggies softened in chicken stock, bay, basil, oregano, thyme... and a drained can of cannellini beans. As the soup simmered, I added a parmesan rind (always a stash in my freezer), which really brought the flavor up a notch. 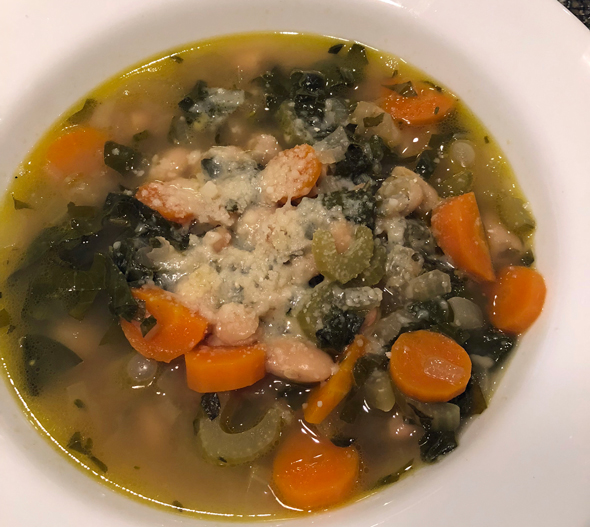 The soup was served with a sprinkle of pecorino. I do what I can while on the road.

Our drive today to Indio was the same as it is every year. Smooth sailing over the Tehachapi Pass (our 650hp engine purring along, passing every truck), then terrible road conditions as we neared Kramer Junction. Rotten road-construction traffic as we continued to Palm Springs, and the same damn tire high temperature warning (on the same damn tire on the same damn stretch of the 210) as we descend into the Coachella Valley.

We have eight tires. One of them is a rebel.

No matter. The rebel tire always seems to rear his (a female tire would never complain so close to home) protest around lunchtime, so we pulled over, had a sandwich, and by the time we were ready to continue, all was right with the whining tire temperature gauge.

The tire did not complain the rest of the way to Indio, maybe because the outdoor temperature was only into the high 70s? We pulled into our campsite at the Motorcoach Country Club just before 4p - greeted by friends and neighbors - and immediately began setting-up our situation for the winter. 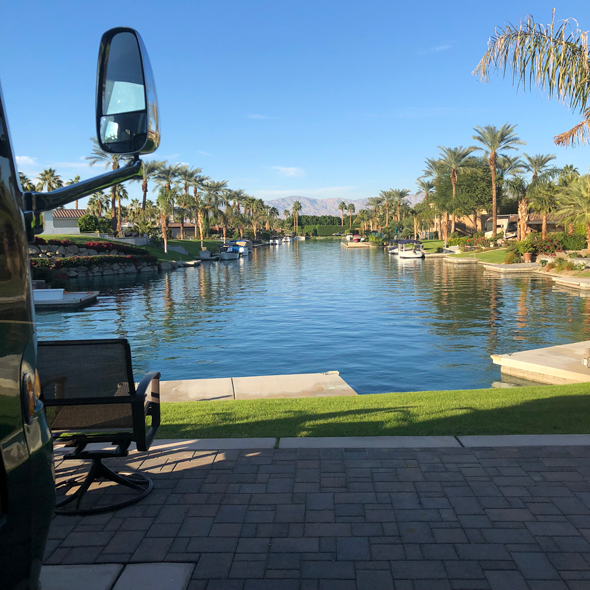 The view from our campsite

Maricella had been here to clean, pressure-wash, and sanitize our site. The gardener had planted yellow pansies. The sky was clear, with no evidence of forest fires in SoCal or NorCal. It was 78 degrees.

Captain Jim and Mary came by. Colleen and Rick came by. DT had the internet and television situations working within minutes.

A few moments before 6p, Colleen and Rick came to fetch us in their golf cart. (our golf cart will be delivered soon.) We were present for the 6p cash-money drawing for the Friday Night Club event at the Motorcoach Country Club. (On the first Friday of the season, $100 is put in a pot, and a lot number is drawn at 6p in the restaurant at MCC. If the owner of the drawn number is present, they get the $100 cash prize. If not, another $100 is added to the pot for a drawing next week, and so on and so on... Must be present to win. The pot has grown to over $1500 at times.

Tonight, the pot was $300 and the owners of the lot number drawn was not present... meaning $400 next week. We have been owners for around 6 years and our lot number has yet to be drawn. Either our site number is missing from the pot (400 sites), we are super-unlucky, or - we are next! Always hopeful.

I sautéed the rest of the chard, added it to a bit of pasta, topped it with grated parmesan - and dinner was served... along with a salad using more romaine from Gina's garden.

We will settle-in tomorrow.