Los Angeles, California: I left rainy Oregon this morning and flew down to sunny Los Angeles. DT is off to Eugene for several days of rainy meetings. I actually had to walk through puddles to reach my tarmac-parked commuter jet and could not believe my eyes when I was seated next to the same random guy I have been seated next to countless times on the Portland-Burbank Alaska Airlines shuttle.

When I rang the doorbell at Lisa & Lenny's - 2.5 hours after take-off - Leo absolutely went bonkers with excitement when he saw me. Possibly he does this when he sees the mailman or FedEx delivery guy as well, but he flew into my arms, screamed and proceeded to hit me in the face with his wind-mill arms until he could no longer control his excitement and then buried his face in my neck just before he kissed me full on the lips so hard I could feel his new teeth!

A few moments later, Lisa had him ready for a nap while she ran out on errands. I have not lost my touch. A few rounds of Janis Joplin later, and Leo was out. 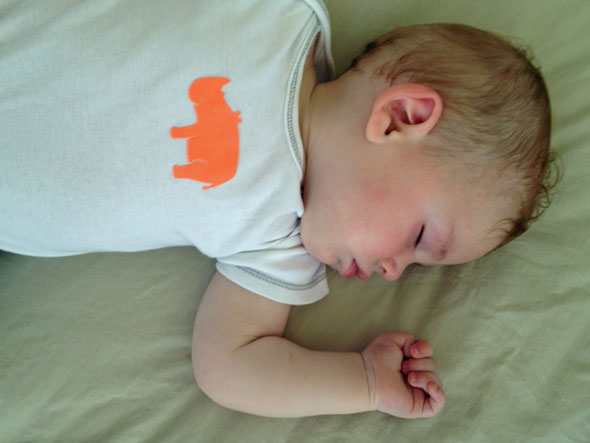 Ninety minutes of frantic activity ensued while The Wee One crashed. 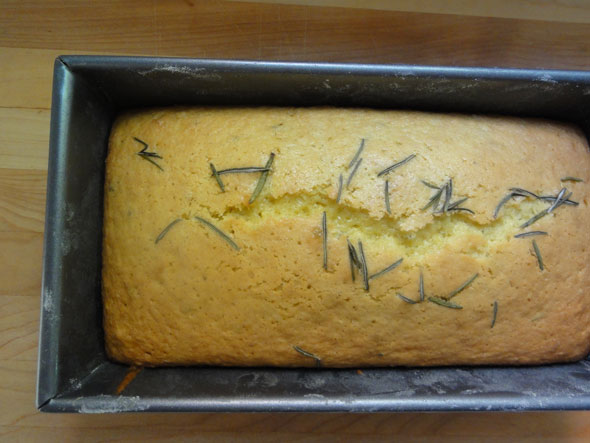 Lisa grocery shopped, baked cookies and baked an olive oil rosemary cake. The cake is a work in-progress and she wants to improve on her second attempt. Wonder where she gets this? Lisa grilled marinated strip steak for dinner and served the steak with crispy roasted Brussels Sprouts and a tomato salad. Leo had zucchini for the first time tonight (just for you, Billy) and Leo really liked this yummy squash. Leo loves food. Wonder where he gets this? 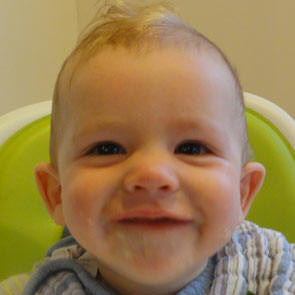 Four blurry photos of Leo. There isn't a film speed fast enough to capture this illusion master. Already trying finger foods. I can't really remember at which age Lisa started eating finger foods. It was over 30 years ago. In The Philippines. I can't find the "rewind" button to my brain.