Sacramento, California:  Lest you think we are just old retired people driving around in a motorhome going to track meets, let me tell you we do other stuff as well. We exercise... well, in this heat, DT is the only one exercising. (Usually before I am even out of bed.) And, we go to lunch.

One of our long-time favorite restaurants in Sacramento is Lemongrass (601 Munroe St, Sacramento, CA 95825, (916) 486-4891). It is a Vietnamese-Thai fusion place (though the two cuisines do not need much fusion) and a very popular spot in Sacramento. Years ago, Gina and Steve took us here and we keep coming back for the delicious food. Our lunch: 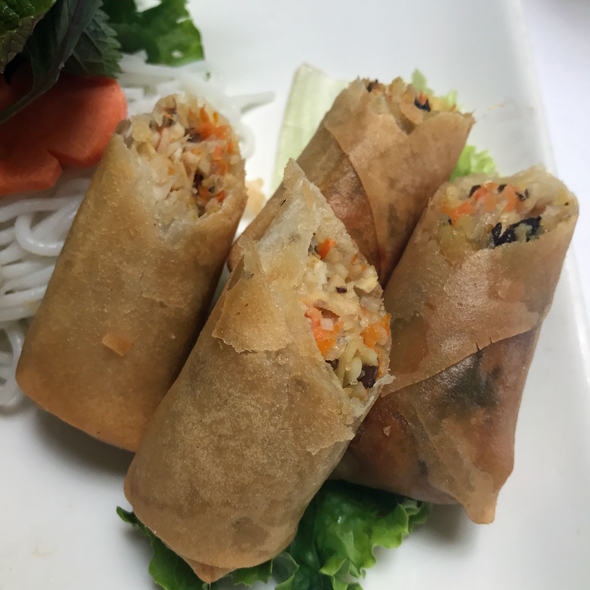 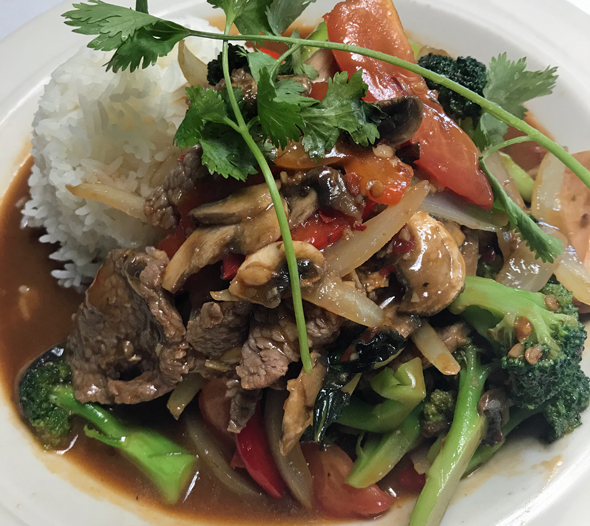 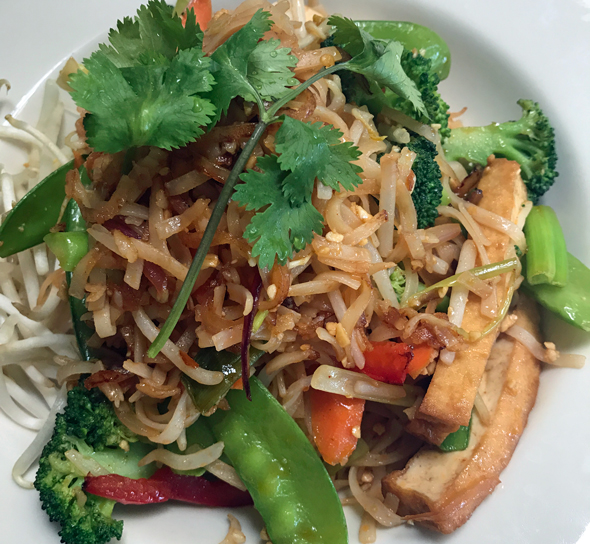 Pad Thai (vegan noodles with tofu) for me 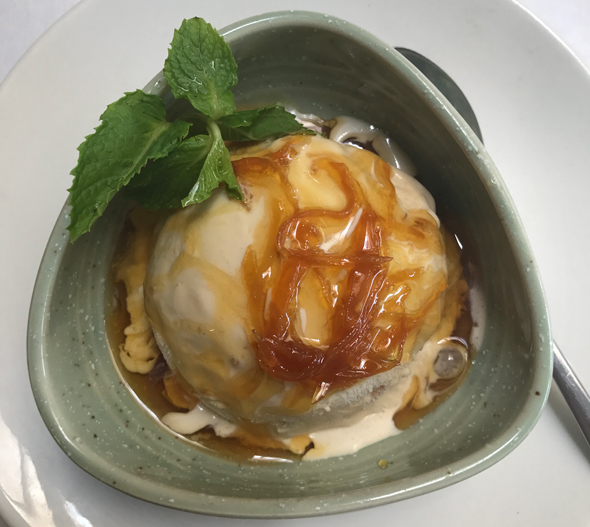 We shared their famous ginger ice cream - the best thing on the menu.
We always have this dessert!

After our late leisurely lunch, we had time for a rest/needelpointing at the RV before heading back to the track for Day 2.

We arrived to Hornet Stadium at 4p. The temperature was only 101 degrees... but it dropped considerably and quickly, dipping into the high 80's for the last events of the evening - the 5000 meter finals after 9p.

As I reported yesterday, Trey Hardee was looking good to make the US decathlon team for the London World Championships in August. Today he completed the final five events, finishing in first place. His teammates are another pro, Zach Ziemek and Devon Williams from the University of Georgia. 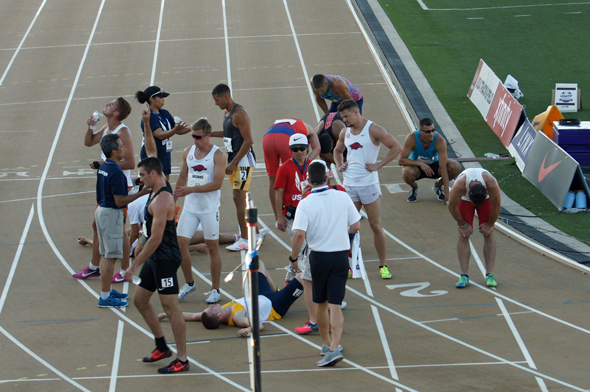 Decathletes collapse on the track after finishing the 1500m - the final event.

It was an amazing day for Our Ducklings! So many races featured a current or past University of Oregon student. Current students, Alaysha Johnson and Sasha Wallace moved on after the first round of the 110m hurdles. In the 400m semi-finals, Duck Phyllis Francis had the fastest qualifying time, but Elexis Guster finished ninth - just out of the running. Pun intended. 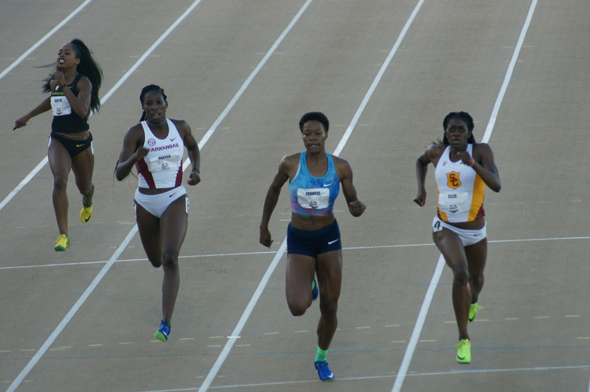 Phyllis Francis (in blue) wins her heat to advance

The Wonder Girl of the NCAA meet two weeks ago, Duck Raevyn Rogers, was second in her heat to advance to the 800m final on Sunday. Rogers will find another Duck, alum Laura Roesler in the final as well. 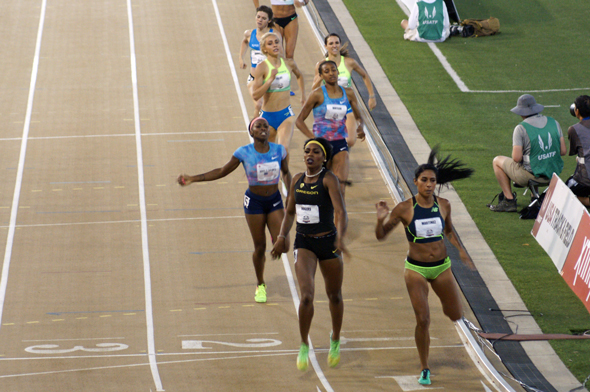 Brenda Martinez (green shorts) wins her heat in the 800m semi, with Raevyn Rogers in second.

The men's 100m final began with a false start. The (current) rule is an immediate disqualification for a false start. It is a complicated procedure these days as the starting blocks (where the sprinters place their feet prior to the starting gun firing) are read electronically, so a false start can be easily detected... except in the case where a sprinter gets such a fast start the software cannot truly read the nano-of-a-second between the gun sound and the feet leaving the blocks. It is a very complicated situation. After the false start was detected in the men's 100m final tonight (oh my goodness - the FINAL!) the referees huddled in conference for several minutes. Who would be disqualified? Which sprinter jumped the gun? After a bit, the referees decided the false start would be charged to everyone (or no one) and all eight racers could continue. We do not know if it was a malfunction of the equipment, if the reaction time from an athlete was so stellar as to not be readable, or who-knows. All we know is that the eight men flew out of the blocks on their second try and veteran (convicted drug cheat) Justin Gatlin won the race in 9.95. Christian Coleman, the Tennessee sprinter who won the 100 and 200m races at the NCAA Championship in Eugene (and who was signed to a pro contract with NIKE between yesterday and today) was second. Christopher Belcher was third - your team for London. 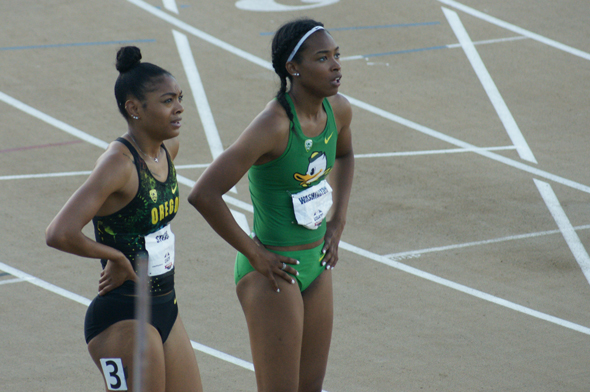 Deajah Stevens and Ariana Washington:
"Looks like we are going to London this summer!" 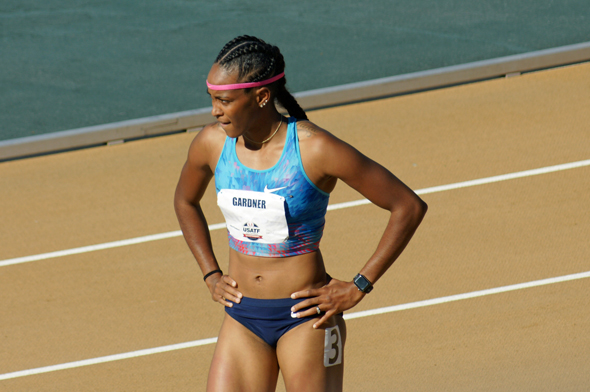 Though Duck alum English Gardner did not make the 100m team, she will probably be chosen for the relay pool (a group of athletes the coaches can utilize in relay races).

The last race of the evening, the men's 5000m final, was very interesting. Paul Chelimo, who runs for the US Army, took off in a sprint like he was running the 800m. Mr. Chelimo gained 40 meters on the pack and held it the entire race. Strangest thing and very unusual. After 3000m, it was pretty much decided it was a race for 2nd and 3rd, because with his large lead, Chelimo was going to win. Happily, Duck grad Eric Jenkins came in second and will be representing the USA in London at the World Championships.

Another wonderful day of sport - in slightly cooler temperatures. Tomorrow we do it once again.

Until my next update, I remain, your very pleased correspondent.