Sacramento, California:  We spent yesterday with chores and errands, but enjoyed a great evening with Brother Steve and Gina, and Dave's nieces - all live in the Sacramento area.

The USA Track & Field Championships began today at Sacramento State University. The track circles the football field and is flanked on the straightaways by aluminum bleachers. The bleachers are not covered/shaded.

It was 107 degrees in Sacramento today. 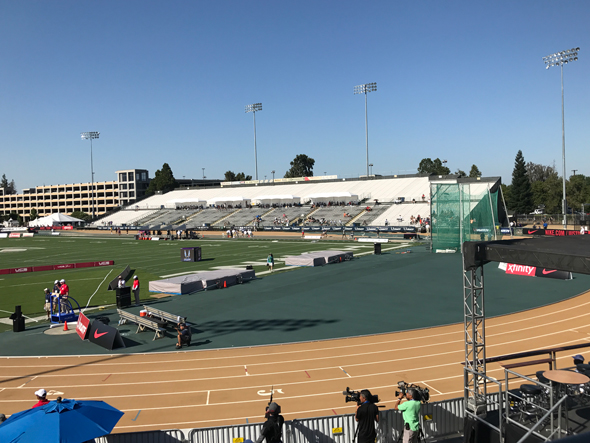 Try to recall a photo of the grandstands at Historic Hayward Field during a track meet. The stadium is always full in Eugene. How many people are in the stands in Sacramento? To be fair, later in the day, on the opposite side of the field, several thousand fans filled the stands as the sun sat and shade covered the bleachers. May I add... it was 80° in Eugene today. Even the memory of the cold, rainy weekend for the NCAA meet two weeks ago seem like a welcome swap for 107 degrees. The temperature measured on the surface of the track was rumored to be 180°.

As I have written so many times before, big national meets always have a bit of a "changing of the guard" feel. The top three finishers at this meet will represent the USA at the World Championships in London this August. This is a prestigious honor - a chance to win medals and a big fat paycheck. A few older athletes, knowing they have reached the end of their career, give it one last go. Many know it is most-likely their swan song. Their final encore. Some don't want to give up the ghost. Popular athletes want to hear the roar of the crowd one last time.

Track fans are knowledgeable. We are loyal and supportive of old favorites. The knowledgeable fans are also supportive of the young new-comers. We love a winner, but we also love a loser. We love the struggle. The fight. We understand the fight, so cheer as loudly for the champion as we do the straggler finishing a lap behind the champion. It is the true essence of Our Sport. One athlete - running, jumping or throwing - competing against others, but mostly competing within themselves. 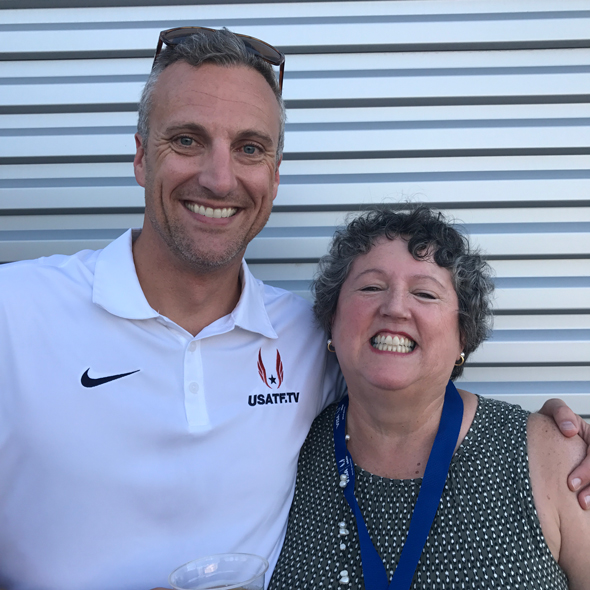 One great thing about big meets is the chance to see old friends. Rob Vermillion (who was DT's assistant during the 2008 Olympic Trials) is now with the broadcast crew. Rob has a face for television. I have a face for my own blog, but look how happy I am to see our old friend.

Meet results can be found here, but here are a few background stories I found interesting:

Alysia Montano ran her 800m heat while five months pregnant with her second child. Montano wore a Wonder Woman bra-top as she was inspired to learn actress Gal Gadot had filmed the new Wonder Woman movie while five months pregnant. Mrs. Montano finished last in her heat. She finished with every fan on their feet, cheering loudly, for the admired athlete. 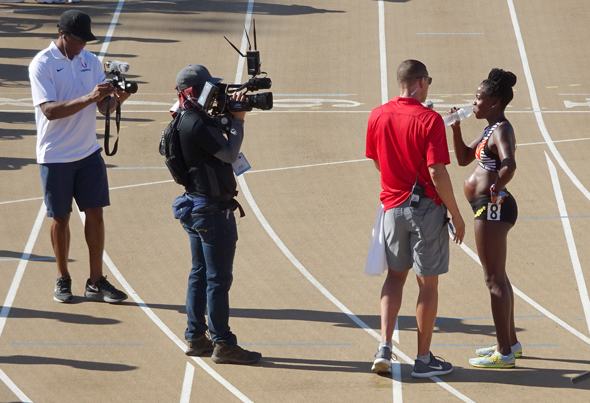 Another very popular 800m runner, Nick Symmonds, had been Instagramming quite a bit over the past few weeks that his 33-year-old "bison-like body" was going to give it one more go at the National Championships. Mr. Symmonds has been on two Olympic teams and won a silver medal in the 2013 World Championships. He is also the CEO of his own company, RunGum. He finished last in his heat as well, again, to roars from the crowd.

31-year-old miler, Gabriele Grunewald, has just finished a three-week chemotherapy session to fight a rare metastatic cancer. Her torso is covered with a scar from liver surgery. This is the fourth time Ms. Grunewald has fought cancer. She finished last in her heat, but first in the hearts of the fans.

But there is one 33-year-old athlete still in the game: decathlete Trey Hardee. The Texas alum is hoping to compete in London and keep training for the Tokyo games. With the World's Greatest Athlete, Ashton Eaton, retired from the sport, the top step on the podium is open. After the first day (first half) of the decathlon, Mr. Hardee is in second place. 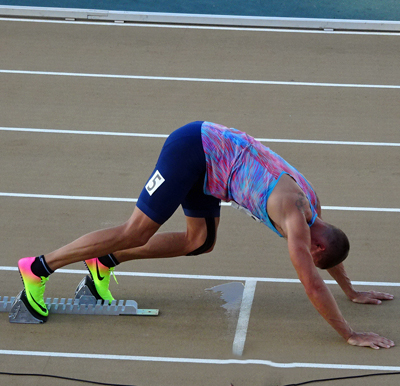 Trey Hardee, taking the blocks prior to the 400m.

It was a great day of sport, with so many interesting back-stories, but the heat was completely draining - and I was sitting in the shady hospitality area provided USATF. The temperature is predicted to be ONLY 100° tomorrow, 97° Saturday, and 92° Sunday (the final day of the competition). I'll remember to bring a sweater. 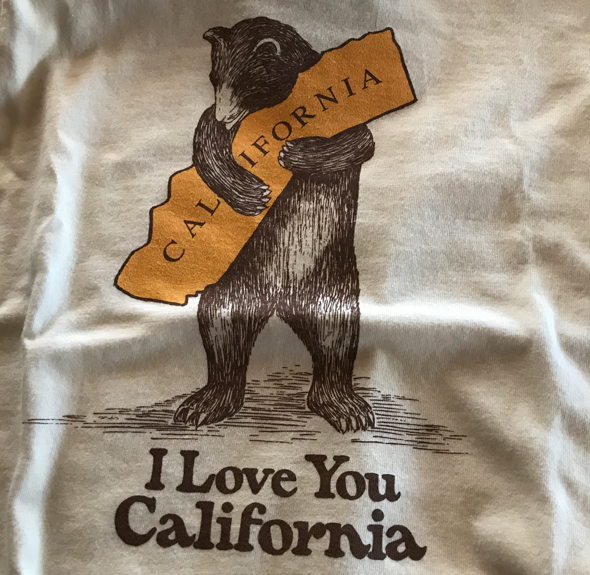 A T-shirt we purchased for Leo at the Sundial Bridge gift shop last week.

Until my next update, I remain, your medium-rare correspondent.