Portland, Oregon: I flew up to Portland for a few days to see my husband attend the USA Indoor Track & Field Championship this weekend and to attend the World Indoor Championships next weekend. DT serves on the committee organizing both events.

I am now wearing this thing called a "coat". It is a heavy garment designed to keep a person warm in cold weather. First stop, Pizzicato, for a Squisita Pizza (mellow lamb sausage, artichoke hearts, feta & fontina and a house-made pesto base). 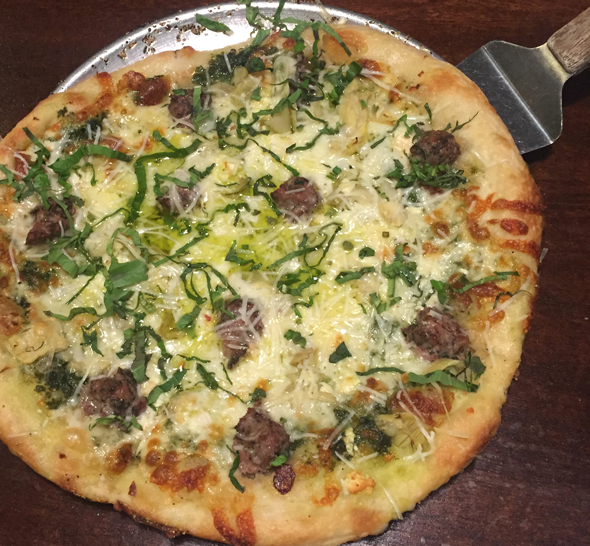 That warmed me up.

Both meets will be held at a track set up in the Oregon Convention Center. If you do not follow the sport, here are a few fun facts. A regulation indoor track is 200 meters (an outdoor track is 400 meters). For the safety of the runners, the oval is slightly banked on the turns. 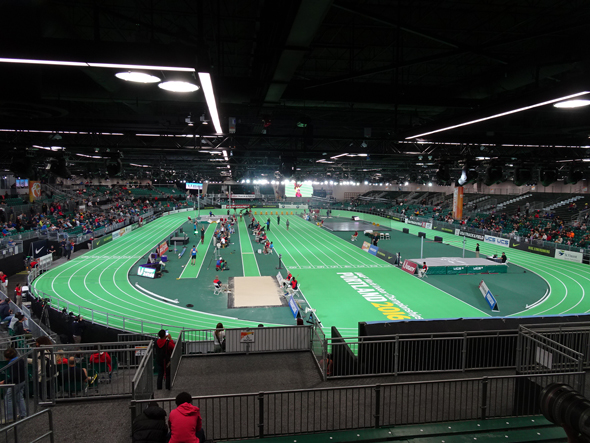 This particular track already has a very interesting providence. It was built in Estonia, shipped to Portland, and assembled in an old warehouse. While at the warehouse, the track was tested by world-class runners and high school kids in a series of events dubbed House of Track. The athletes sang high praise for the fast-yet-bouncy track. After the House of Track experience, the oval was unassembled, moved a few blocks to the Oregon Convention Center, then reassembled for the indoor US and World Championship meets. And... after these two events, the track will be unassembled and shipped to its new permanent home at the University of Iowa... where I assume it will be repainted in Hawkeye Yellow & Black.

Here is a 30-second time-lapse video of the track being installed in the Portland Conventions Center.

And that is how it is done!

Dave and I attended the first day of the two-day USA Championships, and went into the Convention Center quite a bit early so Dave could give me a behind-the-scenes tour. Climbing to the top of the stairs, and getting site of the track for the first time was so exciting! I have been seeing photos for weeks, but the enormity of the project smacks you in the face at first sight. 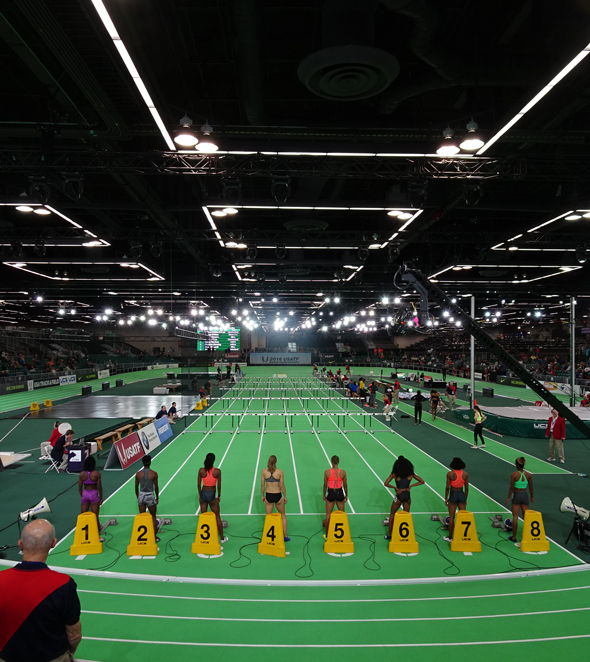 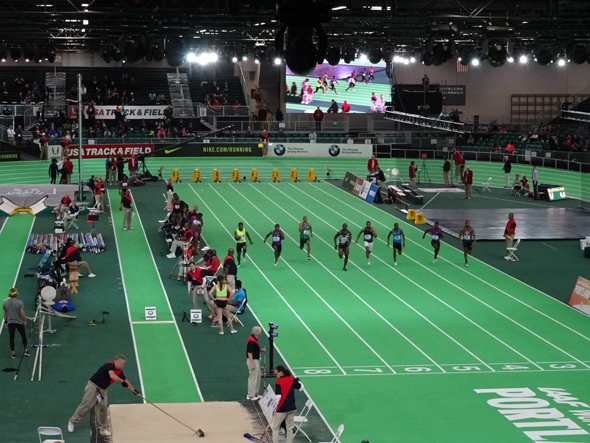 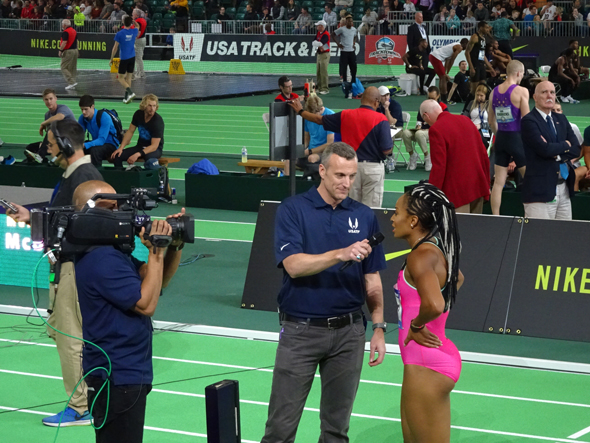 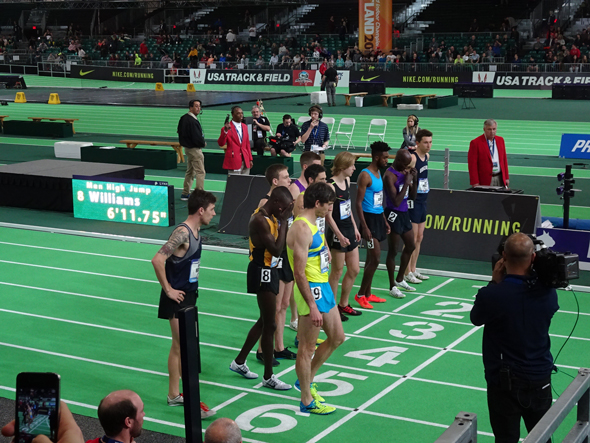 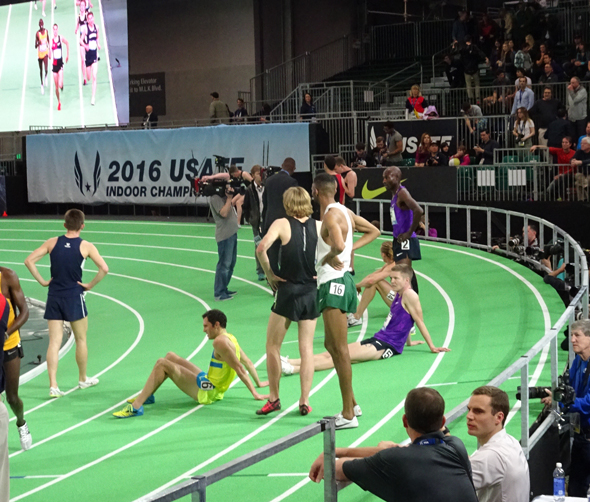 Besides all the action on the track, there was a little action at the local hospital emergency room. Dear Reader, I must relay (no pun intended) a little bad news. The World's Greatest Athlete is no longer completely perfect. He needed six stitches to the top of his glorious crown after the bar atop the pole vault standard fell and gashed his scalp... and the WGA was not even pole vaulting... he was simply standing nearby, waiting his attempt at the long jump. There was a lot of blood. I must also report Mr. Eaton did not go to the hospital immediately after being slashed. No. The on-site medics bandaged the wound, and Eaton long jumped two more times. (You must understand, his cape is invisible.) Read about the incident - including a photo of Ashton Eaton grimacing at the hospital and a photo of the WGA long-jumping with gauze over his head here. No worries, there was no concussion and I am confident Mr. Eaton will be in fine form for the World Championships next weekend. 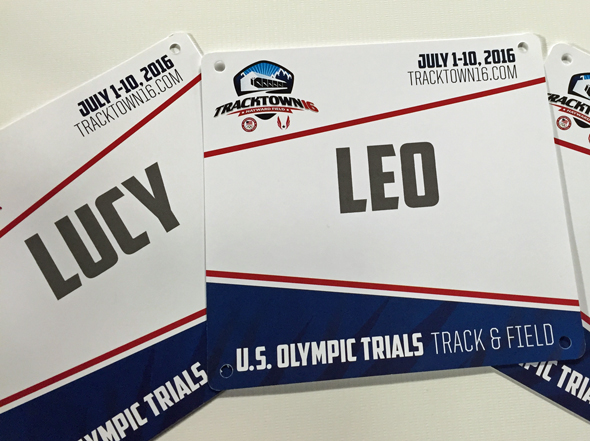 Until my next update, I remain, your "TrackTown has moved 100 miles north this weekend" correspondent.

You may also like:
Meet info and photos from The Oregonian
Meet results from USATF
Ashton Eaton & Brianne Theisen-Eaton's website