TrackTown, USA:  Our favorite day - so far - as it held the very exciting 1500m men's championship and we know so many kids competing in the race.

The other big story continues to be the weather. 99 degrees and wicked-high humidity. Miserable.

We arrived to the track early. I had every intention of snapping a lot of photos, but I get too busy and too caught up in the races and usually forget. Plus, I did not bring my big camera because I just don't like schlepping it around all day. It weighs a ton. 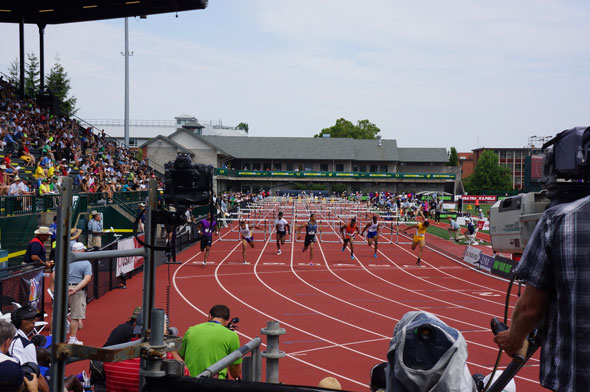 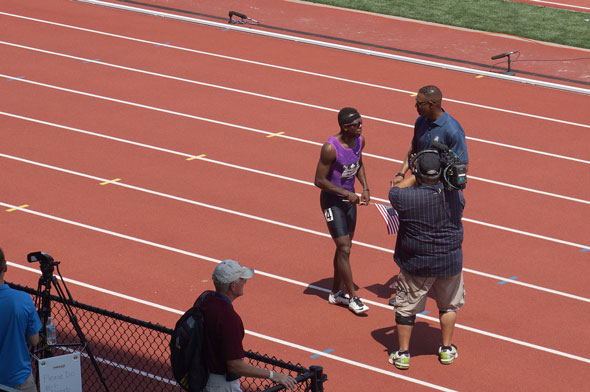 Bershawn Jackson won the men's 400m hurdle championship and will be headed to Beijing. Bershawn "Batman" Jackson has been hurdling forever. When did we first meet Bershawn? World Championships in Osaka in 2007? Helsinki 2005? Wow, that guy has been making a living hurdling for a very long time. Impressive.

Mary was a bit more attentive with her camera and snapped this great shot of the 1500m final: 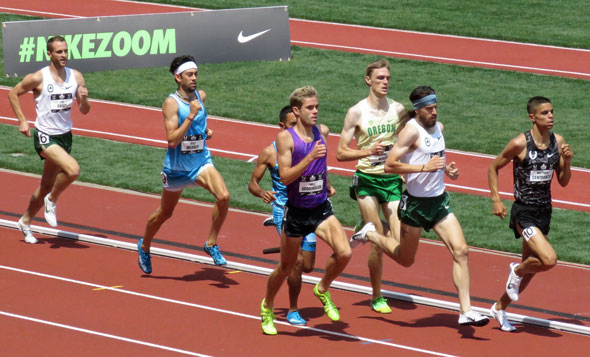 The leaders with one lap to go - Matthew Centrowitz (leading above), would win the race. Amazingly enough, second-place finisher Robby Andrews isn't even in contention with a lap to go. Completely out of this picture. Leo Manzano (5th place with a lap to go, in blue, behind racer in purple) would finish third. Ben Blankenship (long hair, running second above) was fourth. What a race! Pack your bags, boys!

There was nothing wrong with my camera when we ended up at a brew pub after the races... though I still used my phone to take photos of a healthy wedge salad (with grapes in place of bacon) and unhealthy fish and chips. 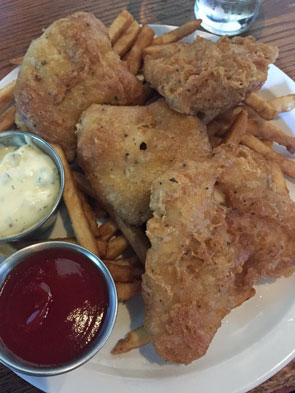 Tomorrow is the last day of the meet. Every event is a final. Tune in.

Until my next update, I remain, your sweaty correspondent.