TrackTown, USA:  The final day of the USA Championships. A huge change in the weather overnight. Cloudy and only in the mid-80's. Completely unpredicted and completely relished by athletes, fans (and gardeners) alike.

Due to the heat, the schedule was played with a bit, allowing the long-distance racers to compete early in the day. This kept fans on their toes - we had to rearrange our schedules as well because we didn't want to miss even one step of the action.

Everyone was on pins and needles about the 800m. So many good racers and there was only one way to see who would be on a flight to Beijing in August. 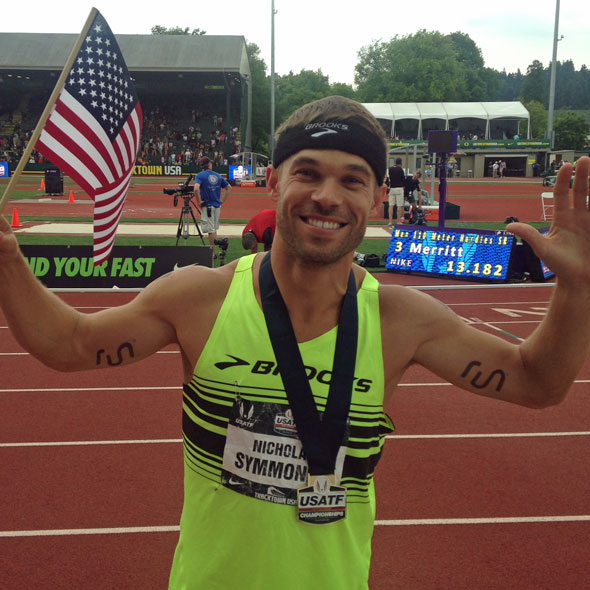 Scaring the you-know-what out of his fans, Nick Symmonds ran his usual race: fall back early in the race and charge to the front in the last 300 meters. The 800m is only a two lap race. There isn't time to mess around. His tactics proved true again and he won by a great margin, with Erik Sowinski and Casimir Loxsom finishing behind Symmonds to finalize the World Championship team. Favorite Duane Soloman actually stopped. Stopped. Dead in his tracks, 50 meters from the finish line. Apparently the NBC announcer commented that Soloman had just been "handed a piano". It was one of the strangest I have ever seen at a track meet... and that is saying something.

One amazing story is of 800 meter athlete Alysia Montano. Montano competed eight months pregnant in this event last year (did not win! not even close!), but won today. The 29-year-old nursing mother held her baby at the podium and the presenter placed the gold medal around the infant's neck. Adorable! Brenda Martinez and Ajee Wilson will join Mrs. Montano in China to represent America in the half mile. 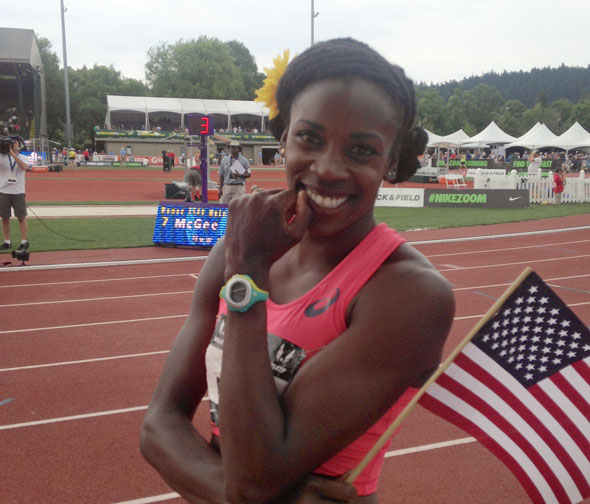 As you may see from the two above photos, I have a friend in high places... or in this instance, low places. Our friend, Rob, was an announcer during the meet and was able to stand along the track in places mere mortals are not allowed. He sent the above photos of Mr. Symmonds and Mrs. Montano to me. Thank you, Rob. 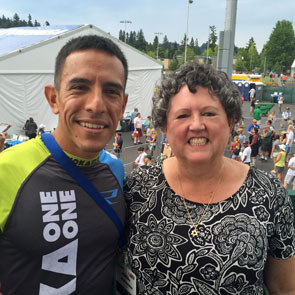 Aren't I just the luckiest gal to pose with these two handsome guys?

One more photo. The best photo of the entire meet. There was a glaring typo in the official meet program. Absolutely hilarious. If you are ever thinking of doing a decathlon in Eugene, think again. There seems to be an extra added event the day after the close of the decathlon (see the final event, scheduled for 6:01p):

Because every decathlete wants to run six miles at the end of their ten events. (Truth be told, this 10000m race for for the juniors.)

At the conclusion of the events, we went back to our motorhome, hitched-up the Jeep (in only ONE TRY) and are now back to Taylor Manor. A very fun and busy week in Eugene.

America is sending a very talented team to China for the World Track & Field Championships. So many new faces and so many old favorites. It will be interesting to see how our team competes. GO USA!

Until my next update, I remain, your patriotic correspondent.
« USA CHAMPIONSHIPS: Day Three Mexican Baked Cod »