TrackTown, USA:  There was a theme in today's races: Changing of the Guard. Familiar athletes - runners we have followed for years - failed to make it out of the semi-finals or failed to make the USA team in the finals. Out with old; in with the new. It is bound to happen as athletes age, but still sad to see.

Except when they are being replaced by Ducks. 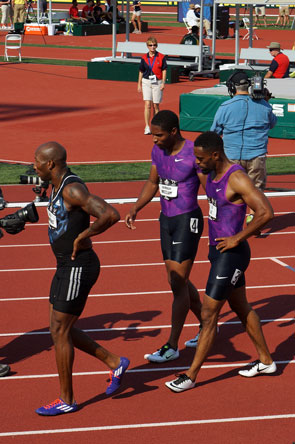 Young Oregon women moving up and making the team... yet old man Tyson Gay is still a force.

The Decathlon finished. The last event is the 1500m. Imagine competing in nine different events over a two-day period and then, hey boys, let's go run a mile! Fun times. 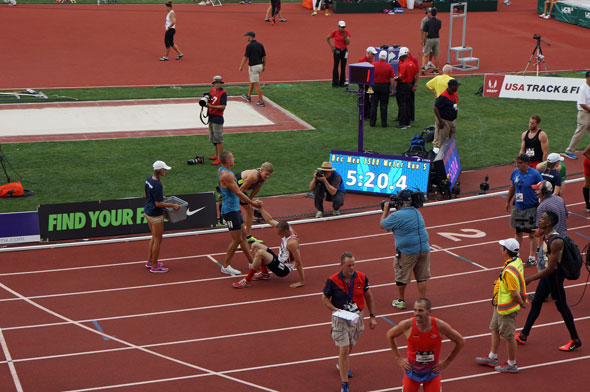 It's just a pile of perfectly-formed male bodies collapsing in happy exhaustion at the finish line. Besides the WGA, America is sending Trey Hardy, Jeremy Taiwo and Zack Zeimek.

One of my favorite 800/1500m athletes, Will Leer, was in the USATF booth signing autographs for an hour today. Mr. Leer did not make it out of the 1500m heats yesterday, as he has been injured, but was quite charming as usual with the long line of fans waiting patiently to meet the handsome runner. He posed for snapshots and signed photo postcards for his fans. 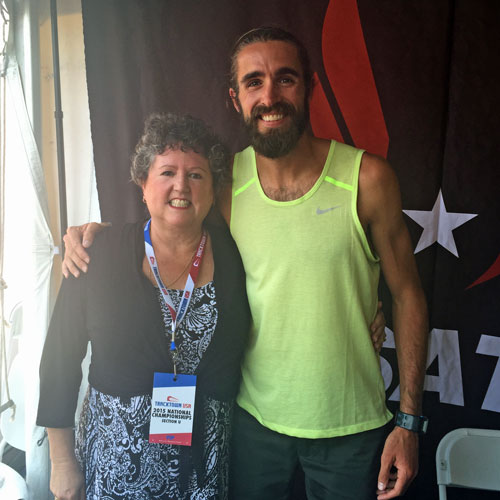 Leer signed my postcard: Dear Leo, Missed you in Eugene, Will Leer.

I will be popping that off in the morning mail to Los Angeles.

Again, the weather is a factor. 99 degrees during the day, then the temperatures dropped all the way down to 97 as heavy clouds came in, causing the humidity to raise to a soggy mess. Not a comfortable day in the stands, so imagine the poor athletes.

The sky did provide a beautiful setting over Historic Hayward Field: 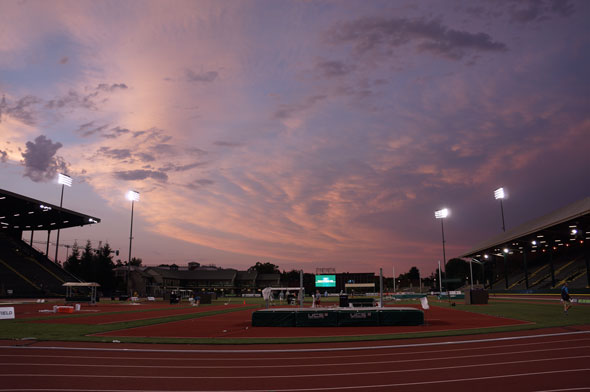 I'm just not a sports reporter. If you want the real news, get results from The Register-Guard.

Until my next update, I remain, your "anxious for the 1500m tomorrow" correspondent.