Coming down from another huge Duck victory, El Guerrouj showing-up to our tailgate and just a very long day yesterday... we enjoyed a very lazy morning around here. Reading the paper and drinking coffee. Pots of coffee.

Well, most of us were relaxing.

Lenny was working the phones, took command of my laptop and was watching two televisions at the same time. This could only mean one thing - Lenny is in a fantasy football league! A Sunday during football season means some serious football time.

We just had to take him to Big Al's! 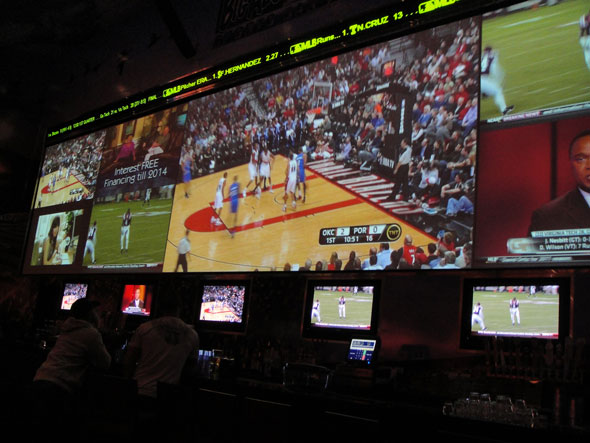 (photo taken a few days ago during a Blazer game)

You remember Big Al's, don't you? The mega-fun family "entertainment" center that opened a few weeks ago about five miles from our house? They have bowling, arcade games, billiards, and several restaurants/bars inside one humungous building. Their sports bar has a 56-foot-long screen.

We ordered Buffalo wings and settled-in for a several hour football marathon. Lisa's friend, Jen, joined us for lunch. The girls became a bit bored, so ventured up to play a few arcade games. 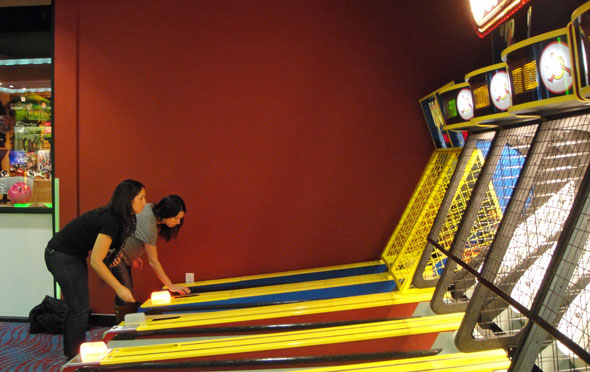 First they played this game where you roll a ball up an incline and it drops into a basket for points. Lisa beat Jen. Then, Lisa beat me. And I don't mean by a few points. Lisa scored more than twice our score. 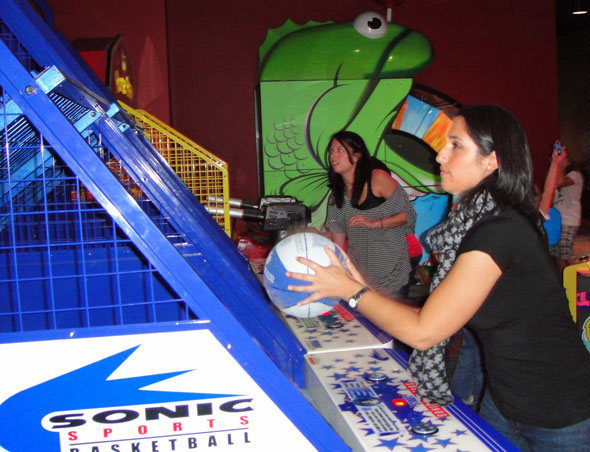 Next we all played a basketball game that actually required some skill. You had to play hoops. Lisa scored so many baskets that the game went into some sort of "bonus round" and the basket began moving, back and forth, across the backboard! Now you had to put the ball into a moving target. Impossible. Lisa creamed us.

Later, DT and Lenny ventured up to find us. Naturally a challenge went out and they found a Pop-a-Shot game for three. Lisa chose the Boston Celtics, Lenny played for the Lakers and DT played for the Trailblazers. Game On!

Lisa is the Champion!

And then we drove Lisa and Lenny to the airport and they flew back to Los Angeles.

Until my next update, I remain, your non-competitive correspondent.