Track Town, USA: Ashton Eaton broke two decathlon world records this afternoon and all anyone is talking about is the weather. It rained harder this afternoon than I may have ever seen it rain in Oregon. Torrential does not describe the rain. I'm not a good enough writer to properly describe this monsoon.

But back to Mr. Eaton. No one told him it was raining. The first event in the men's decathlon is the 100m dash. Ashton ran in the last heat and smoked the competition, winning his heat in 10.21 seconds, setting a new stadium record, meet record, American record and World record and maybe some other records in his spare time. Thirty minutes later Ashton Eaton broke the meet record, field record, American record and World record in the long jump with a 27-foot-long flight. Dude is on fire! Even in his worst event, the shot put, Eaton finished 5th. Then Superman won the high jump and the 400m. This evening, I think he has plans to rescue kittens from trees. After the first day of the decathlon, Ashton Eaton leads the competitors by over 300 points.

I hope you have your DVR's set for Saturday.

Speaking of Saturday, there could be a little trouble with the pole vault. Though a rare occurrence, the women's pole vault was postponed Friday due to the weather. Because using a pole to catapult yourself up into space just isn't dangerous enough - let's throw-in sheets of rain. Just too risky. The officials are working on a reschedule.

I never went to my assigned seat this afternoon, but followed DT around a bit and then stayed in the organizing committee's hospitality suite. It was covered and they had vats of hot coffee... and track and field legends stopped by all afternoon. Track Town 12 is honoring past legends, "Heritage Athletes", every day during the Olympic Trials and today the focus was on the 10000m. 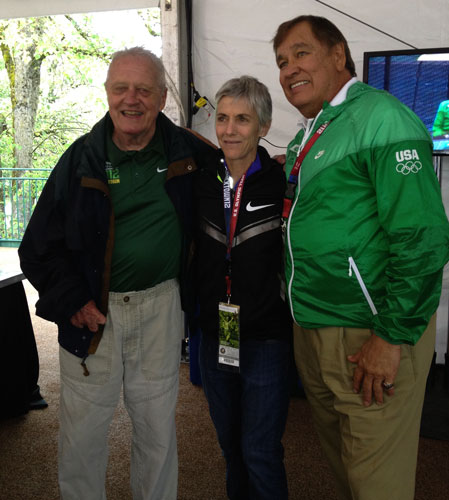 Dellinger (DT's college coach) won the 5000m bronze medal in the 1964 Tokyo games. Benoit won the first-ever women's marathon in the 1984 Los Angeles Olympics and was 1981 US 10000m champion. (Today's admission ticket held an image of Ms. Benoit.) Billy Mills was Dellinger's teammate in Tokyo. Mills won the gold medal in the 10000m, and is still the only American to ever medal in the 10000m. So far.

Here is a short video of Billy Mills winning in Tokyo - his comments at the end are funny: 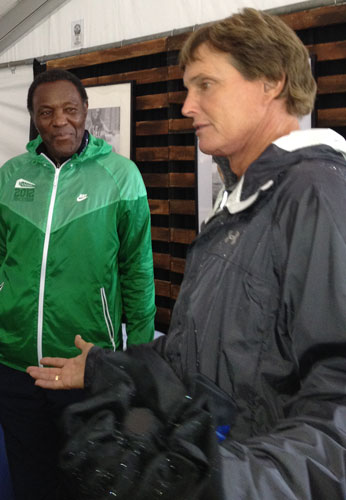 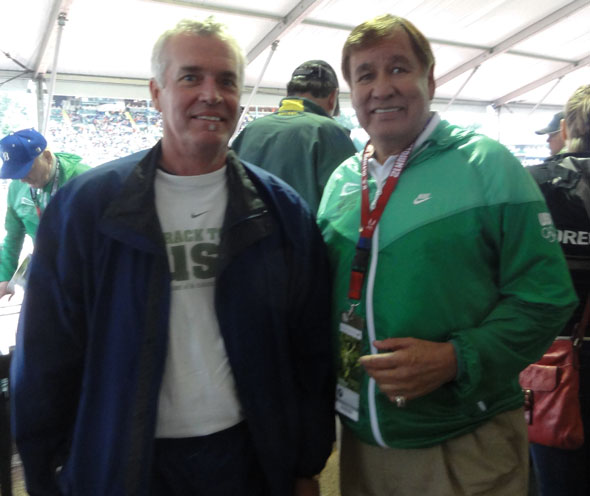 Brother Steve is here from Sacramento for the Olympic Trials. Steve and Billy Mills used to be neighbors in Sacramento. Small world, eh?

This is how Hayward Field looked at the start of the men's 10000m final. (Notice the stands are full.) 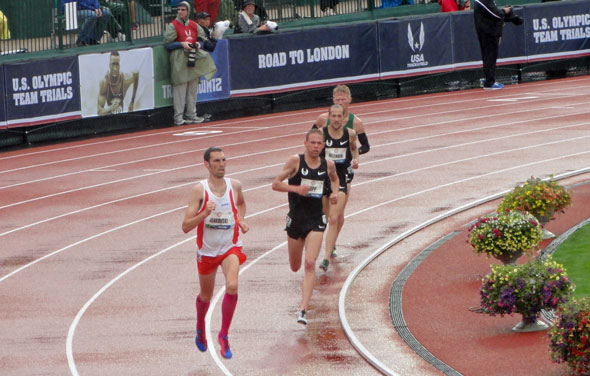 Not the most fun day I have ever spent at a track meet, but two world records tends to take the chill off. Unfortunately, the weather is not scheduled to improve.