I spent all day at NIKE World Headquarters watching the hammer throw Olympic Trials. The experience was incredible! So many people watching the throwers - I estimate over 5000 fans. They filled the bleachers and completely filled every inch of lawn on the sides and ends of the field. Wonderful! NIKE went over the top to accommodate the athletes with one of the nicest Hammer cages the athletes had ever used, free food for fans, campus tours and a huge beer garden. Even the weather cooperated.

Most days this is a soccer field, used by employees. There are two soccer fields and two fitness centers on the NIKE campus - even an indoor pool.

The women threw first. From two dozen contestants, Amber Campbell, Amanda Bingson and Jessica Cosby will be representing the USA in London. Each woman has met the Olympic qualifying mark of 71.50 meters. Ms. Bingston is still in college (UNLV)! None of the ladies had ever thrown in front of so many fans and they were thrilled at the loud cheering crowd. 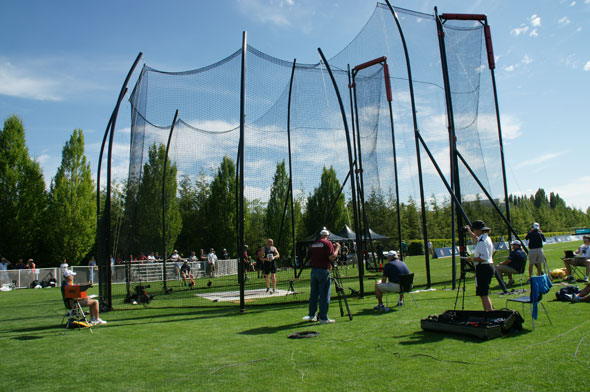 Then 24 men had a go at making the US Olympic team. In the center of the cage is a 7-foot concrete circle. Throwers must remain inside the circle and the hammer must land within a marked 35-degree pie-shaped area. The two "doors" on the opening of the cage are flipped back and forth to accommodate left or right-handed throwers. The cage is for protection of the spectators. The implement itself consists of a metal ball attached to a wire with a triangular-shaped handle. Throwers wear one glove and will spin three or four times before releasing the ball (wire and handle). 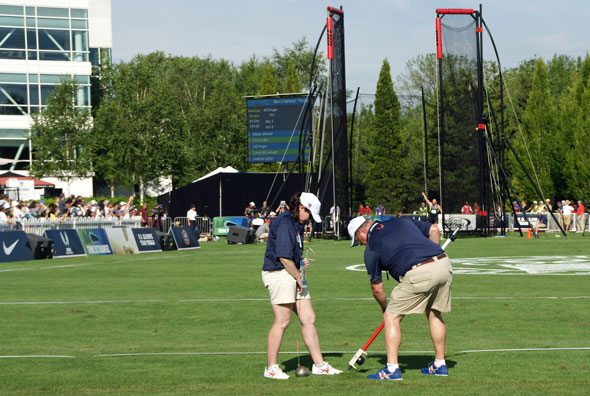 Very very very very attentive officials are waiting out in the field to measure the throw. These days the distance is measured electronically, but the throwers know a long throw from a short throw and the audience can decipher the quality of the throw by watching the reaction of the athlete. If he jumps up and down - it's going to be a long toss. 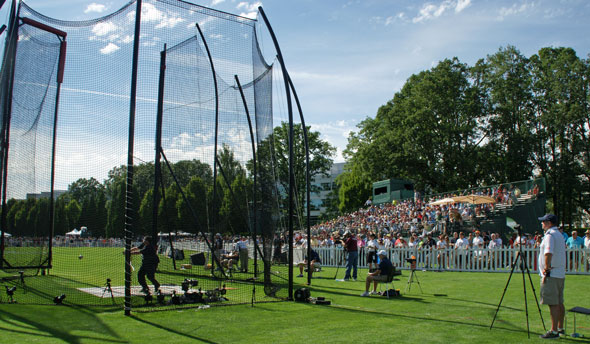 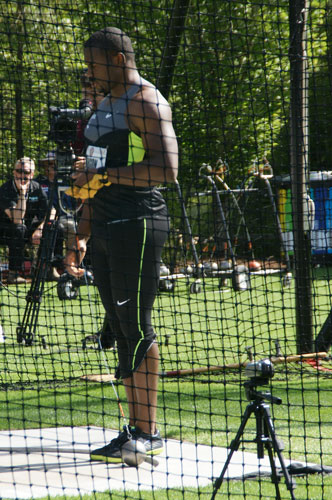 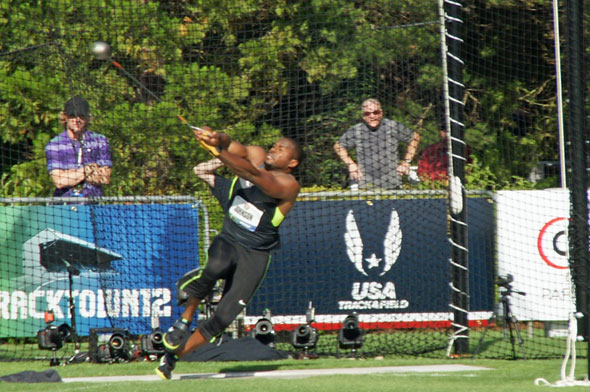 A bit blurry, but this photos shows the velocity - and the implement

Kibwe Johnson won the hammer competition this afternoon. He will be joined in London by AG Kruger... and hopefully Chris Cralle. Cralle has yet to meet the Olympic standard of 78 meters (almost 266 feet). He has until the 8th of July cut-off date. Go Chris!

After he won, Kibwe Johnson made a snow angel in the logo painted on the field. He was one very happy young man. 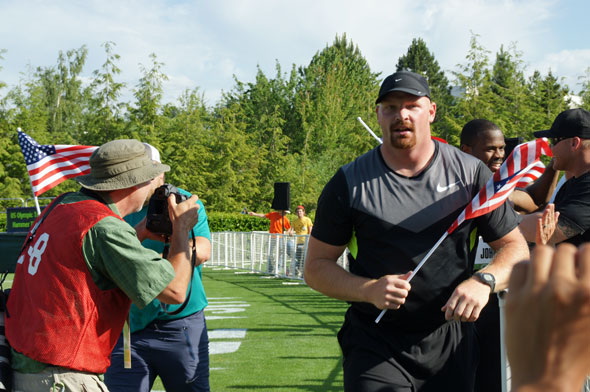 The US Olympic hammer teams took a victory lap around the perimeter of the field. Here, AG Kruger leads the men - thanking the fans. I've come to learn in the world of track and field, the bigger the athlete, the bigger the emotions. These guys are giant teddy bears. 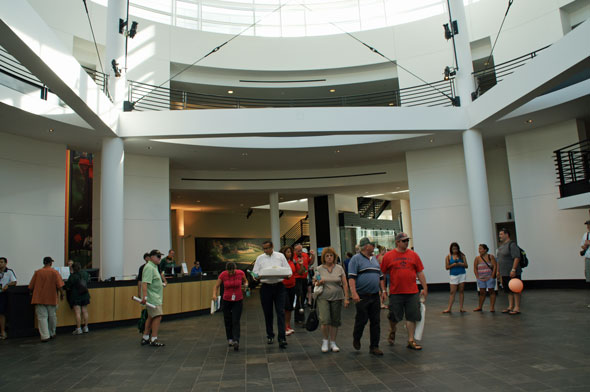 Then I went home. I was at NIKE this afternoon until after 6 o'clock. DT went back to Eugene very early this morning so missed the very event he conceived. So sad. I kept sending him photos throughout the day and he was so happy the hammer trial was so well attended.

A great day with great people (Mary, Steve, Woody, Gary - and thousands of our closest friends). Tomorrow I will drive to Track Town and watch the future World's Greatest Athlete in the first day of decathlon competition. Rain is predicted.

I will leave you with a photo from Los Angeles of a really cute baby with a really big smile. Little Guy just makes me happy looking at him. 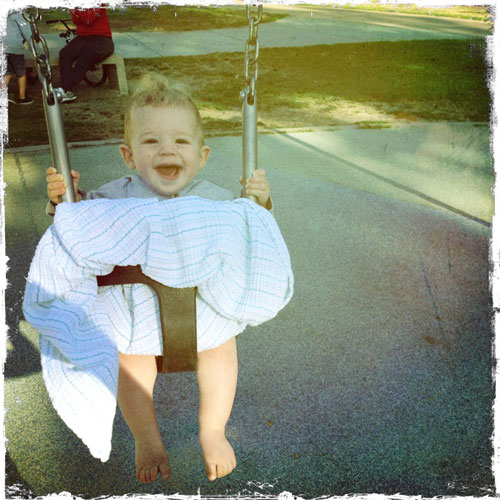 Until my next update, I remain, your tired correspondent.
« 2012 Olympic Trials: Day 0 Two World Records »