Ashton Eaton broke the World Record for the Decathlon by scoring the most points EVER in the entire history of the 100-year-old event. The fact Eaton scored a world-record amount of points in the US team trials - and didn't wait until the Olympic Games  - is unbelievable itself.

As I wrote yesterday, Eaton was on the right track after breaking world decathlon records in the 100m and long jump in the first day of competition. He also won the high jump, 400m and finished 5th in the shot put. Today Ashton Eaton won the 110m hurdles, placed a lowly 8th in the discus throw, improved by at least 4 inches to win the pole vault and finished 5th in the javelin throw.

With only one event remaining - the 1500m run - every fan was doing the math and discovered the Future WGA had to run a 4:16-something 1500m - which would be an improvement of just over 2 seconds from Eaton's all-time best-ever 1500m - to become the WGA.

Did I mention it was raining so hard the grounds-keeping staff were using squeegees, rollers and leaf blowers to dry-off the track? (Did I mention my seat is at the finish line?) 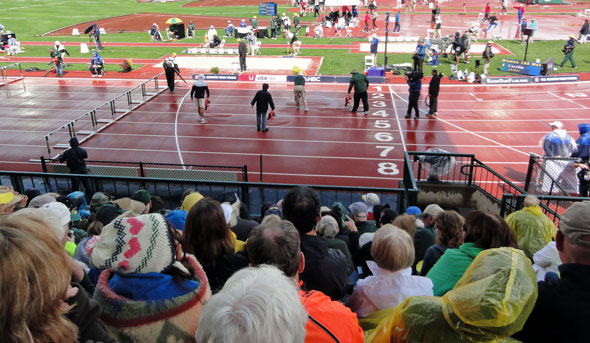 And so the 1500m began. Every fan was on their feet screaming cheering for Ashton to finish the four laps in less than 4:16. Joe Detmer and young Curtis Beach of Duke University, are fantastic runners. (Beach can run two laps in 1.47!) Thank goodness too, as they helped pull Mr. Eaton around the oval. As the racers neared the finish line, Curtis Beach pulled a very class-act by (slowing ever-so-little and moved a bit to the side) allowing Ashton Eaton to break the tape first in 4:14. In the sunshine.

When Ashton Eaton crossed the finish line - and realized he had just broken the World Record - he cried... 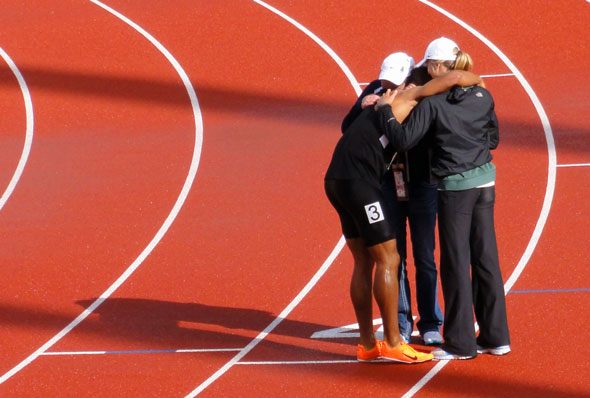 Ashton Eaton hugs his Mother, Roslyn and his fiance, Brianne Theisen at the finish line

...along with 20,000 other people. Not only was this a great moment in track & field, Ashton Eaton set the world record in his home state, his home school and on his home track - in front of his biggest fans. 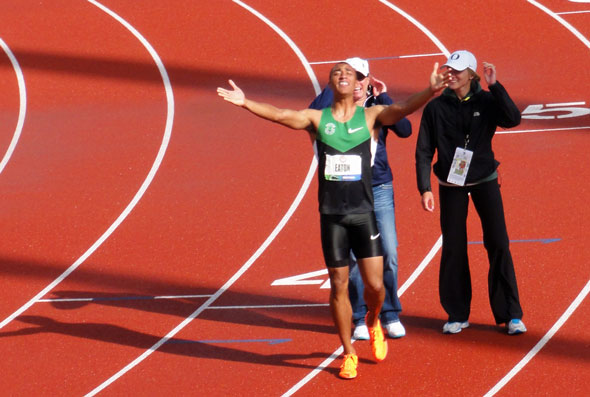 After hugging his family, Ashton Eaton immediately turned to the crowd in the grandstands to thank us for cheering him to victory. We do what we can.

This kid is golden. 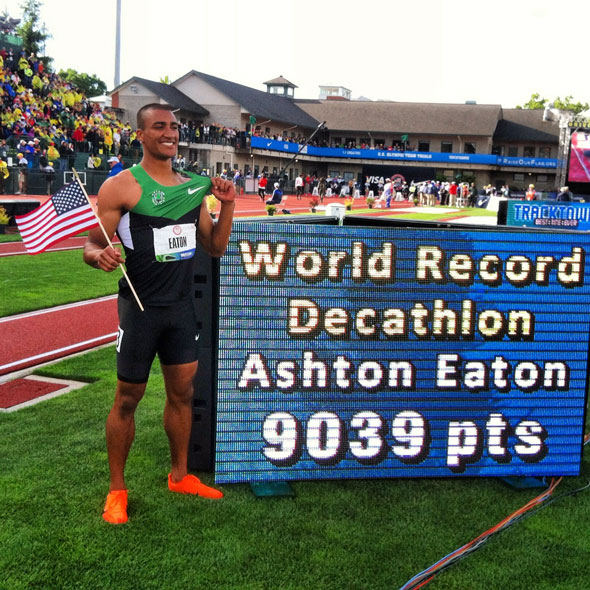 Soon to be appearing on a Wheaties Box, no doubt!

There were many more events at the track today, but I am not a sports writer too over-whelmed to write about them. For complete results, visit the USATF website. The Eugene Register-Guard website has an incredibly photo slide show every day and he photos of Ashton Eaton are exceptional.

A few other things...

This afternoon, during the javelin prelims, Oregon Track Club thrower, Cyrus Hostetler, threw his spear into the air and it broke in half mid-flight. Never in my long history of attending track meets had I witnessed such a thing. Nor had the 80-year-old man seated next to me. 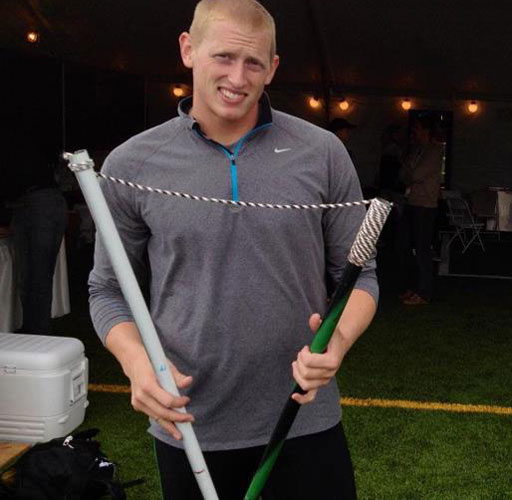 The only thing holding the javelin together was the cord wrapped around the tube, acting as a grip. This was his favorite javelin! No worries for Cyrus, he has more. The javelin final is Monday. This young man is going to London.

Yesterday (was it only yesterday?) Dave was introduced as the Chief of Stuff (not a typo) during the opening ceremonies. Mary snapped this photo of a very soggy DT: 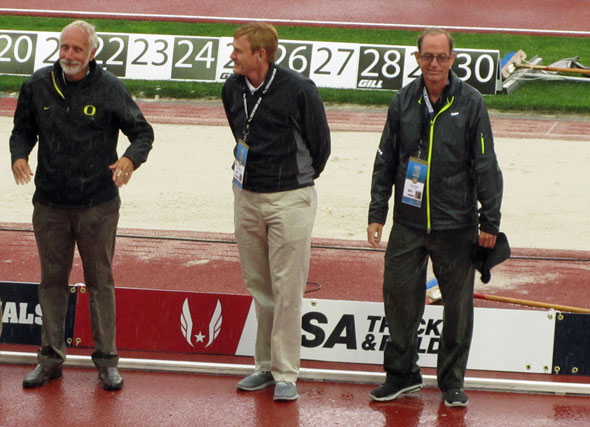 Final tidbit... an artist created very cool wooden benches that resemble the ancient east grandstands at Hayward Field. The benches were going to be placed around the fan festival during the Olympic Trials, but due to the weather, the pieces of art are still inside DT's office area. 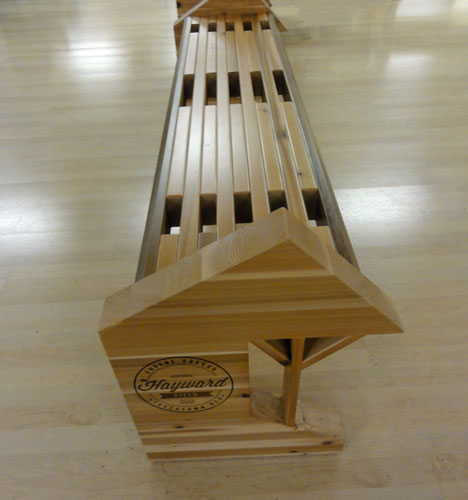 Today was one of those days that a track fan will never forget. Magical. To see someone work that hard for years and years and to have everything come together so perfectly over the span of two days - it's the beauty of The One True Sport, and the destiny of the World's Greatest Athlete.