Eugene, Oregon:  It did take a while for the bus to warm up yesterday, but the radiant floor heaters had our home-on-wheels toasty warm all night. And it froze again last night. Though the fog was heavy when DT left for his morning meetings, by the time he returned to me for lunch, the sun was shining. 37° and sunny.

Transpose those two numbers and you may have my attention.

Lunch was the Chicken Caesar I had planned for our dinner last night (because I was not thinking when I planned that cold supper in 28-degree weather). Seemed better suited for our lunch. While Dave was away at meetings, I shipped orders and made a nearly fat-free lasagna for our dinner tomorrow night - somewhere south along I-5.

This evening we visited two new places! First we met Jules & Gary at the just-opened Wild Duck Cafe, which is conveniently located across the street from the new University of Oregon basketball venue - the Matt Knight Arena. 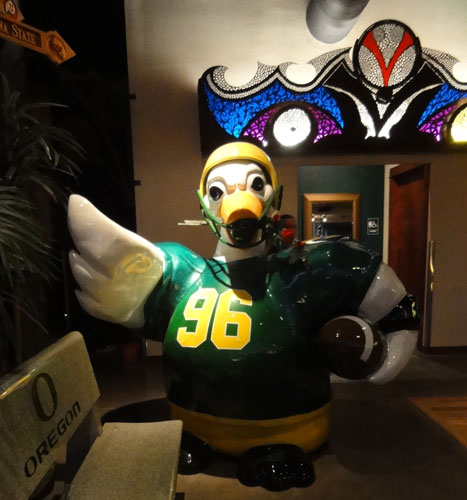 Guests are greeted by this giant guy at the Wild Duck Cafe. The entire restaurant is decorated with vintage Duck stuff - even one of the ancient scoreboards from the old basketball arenas. 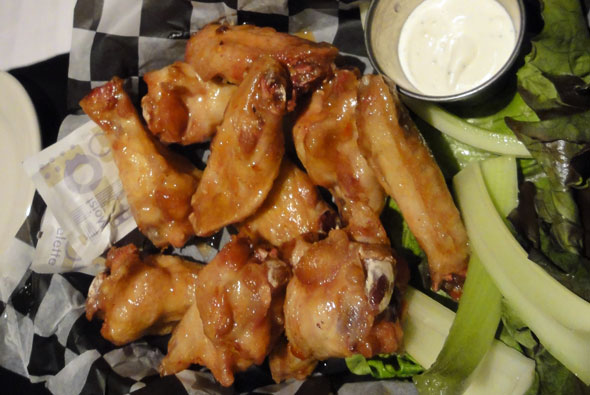 As you can see, we dined on health food - and had a great time with Jules and Gary - before walking across the street to the basketball game.

This is the second season the Ducks have played in the new arena and we have held seasons tickets for several years... but since we are away most of the basketball season, tonight was the first time we had been to a game at Matt Knight Arena! (Oh, don't you worry, our tickets are used - just not by us.) We toured the arena during construction in July 2010. 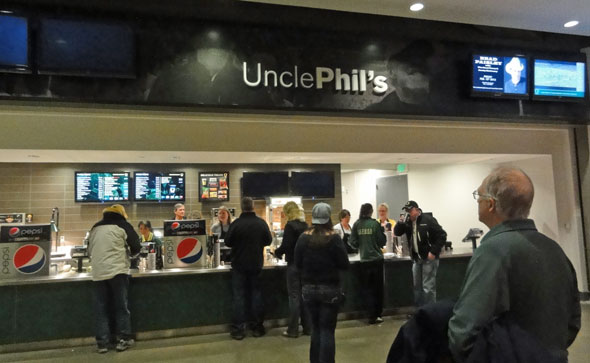 The arena was constructed due to gianormous donation by NIKE co-founder and Oregon alum, Phil Knight. (Is that the silhouette of "Uncle" Phil" behind the letters in the sign? Mr. Knight is affectionately referred to as "Uncle Phil" by the Oregon students. They love him and give Phil a standing ovation every time he walks into any building or stadium.) 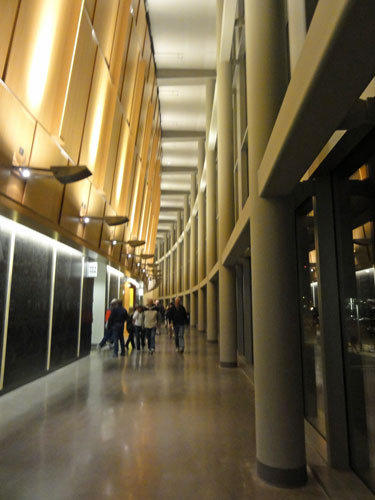 The arena is stunning! 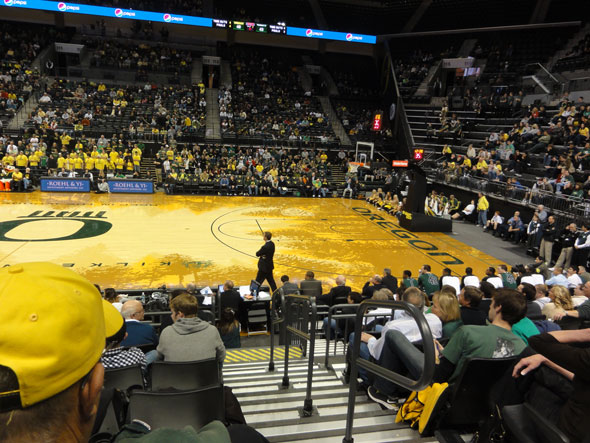 Our seats are great! So pleased with the location. We had great views of the entire court! The floor at Matt Knight Arena is quite controversial and it does not appear very attractive on television. In person, the floor is not such a distraction. The hardwood is ringed with shadows of Douglas Fir trees, in homage to the Tall Firs, the only Oregon basketball team to win the NCAA Championship. 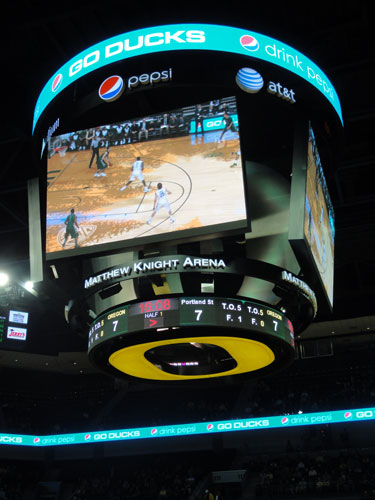 The scoreboard is very mod. The TV screens are huge. 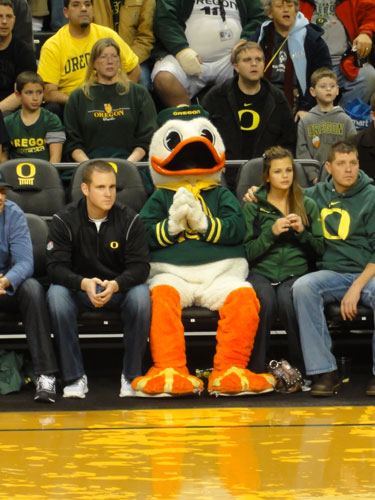 Of course, The Ducks (aka Puddles) was at the game. 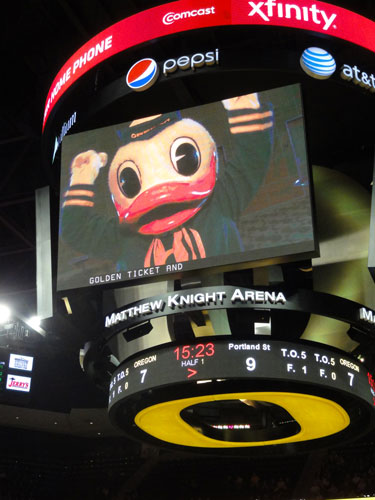 The Duck on the Jumbotron! 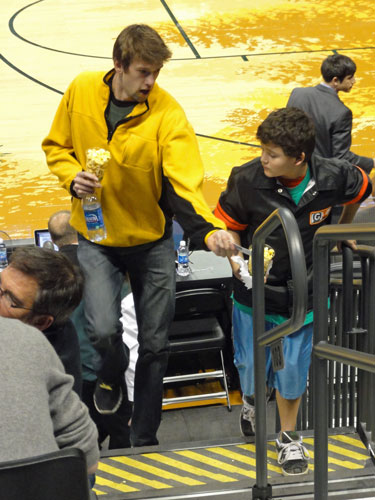 Duck-alum and track superstar, Andy Wheating, was at the game with his "little brother". Andy is a volunteer with Big Brother/Big Sister program. Don't you know it - Mr. Wheating made the Jumbotron as well. 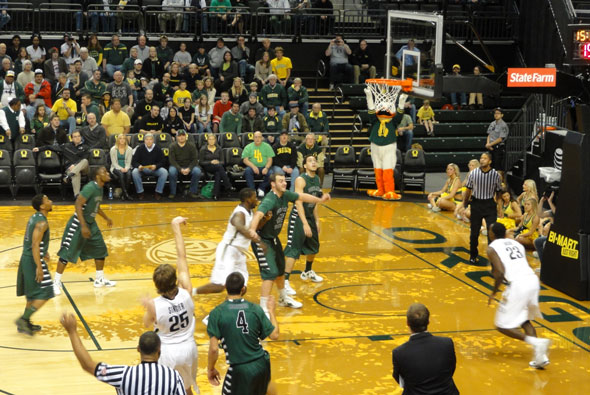 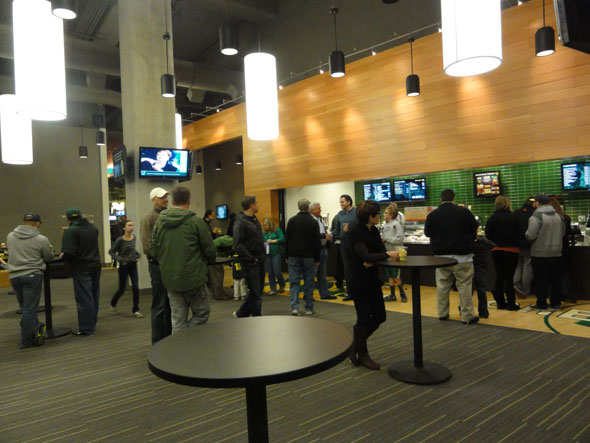 At half-time we went down to the McArthur Club for a frosty adult beverage. 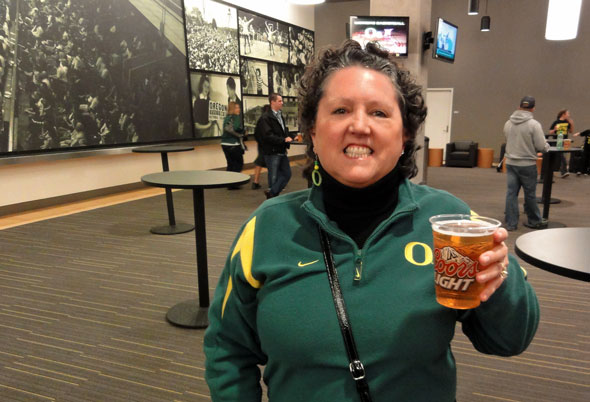 Dave wanted photographic proof that I was drinking a Coors beer. (I am a BudLight girl and please note: though the cup reads Coors Light, it was indeed a regular Coors. My body is a temple.)

So I leave you with a totally gratuitous photo of pretty young things. Love their devotion. School is out. The student section was basically empty. The band consisted of about 10 members. But the yell leaders were there!

We point this coach south first thing in the morning! DT has already unhooked the water - it was 28 degrees when we returned to the RV park after the game. Until my next update, I remain, your GO DUCKS correspondent.

RV Park:  Premier RV Resort. Exit 99, I-5, barely north of Eugene. Full-service sites with hot tub, bath house, laundry, exercise room, newspaper delivered to your site daily. We had a coupon and are paying $30 per night. Pull-through sites are long enough, so it is not necessary to unhook your tow car. The resort also offers front-in sites that look over a pretty pond/lake.

« On the Road Again: The “Defying Gravity” Tour Deja vu All Over Again »