To Eugene… and beyond

Bend, Oregon: Hello from Central Oregon! DT and I decided to visit my folks in Bend for a few days. My Mom has finished with her radiation treatments, is home and slowly recovering from the horrid 15 poisonous doses. She feels like drek.

We needed to take an indirect route (in our Honda CRV) to Central Oregon because Dave had a meeting at the Athletic Department at the University of Oregon. (Still for the 2008 Olympic Track & Field Trails... hey, fellas, can we wrap this up???) While DT was in his meeting, I busied myself touring around the Casanova Center (the U of O Athletic Department, named after famed Duck football coach and AD, Len Casanova) and did some shopping at the Duck Shop. I can say, the University of Oregon doesn't mess around with anything (except they have really, really, really crappy freshman dorms). 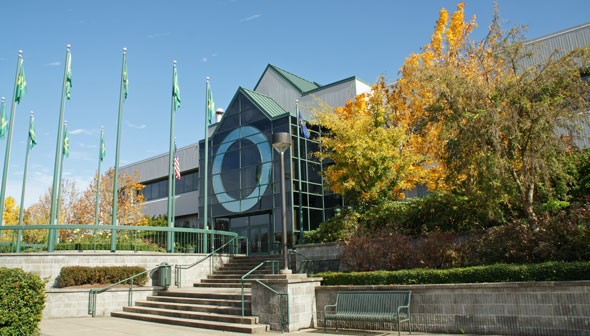 The U may have a super-modern AD, the best football locker room in the NCAA (seriously, pro players drool when they see the Duck locker room), a newly-surfaced track and a brand-new baseball field, but it is also home to the oldest basketball arena in the NCAA. Nearly 80 years old, McArthur Court, is right on campus and is legendary as one of the hardest arenas for opponents. Opposing teams dread playing in "Mac Court". Mac Court has steep sides - creating a bowl and the nickname "The Pit". Mac Court is fitted with wooden bleachers. The noise is deafening. 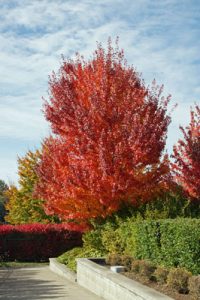 But times change and after 80 years, Mac Court breaks so many safety violations - even after many retro-fittings - it sadly needs to demolished. I can't tell you how many exciting games we attended here as students. Lots of great memories of Ronnie Lee, Greg Ballard, and (current Duck basketball coach) Ernie Kent. Bill Walton was at UCLA... ah, the Good Old Days.

So many people have such fondness of The Pit, it really is difficult to say goodbye. Luckily, the University of Oregon has a very loyal alum - Phil Knight. Mr. Knight ran at the University of Oregon, and later started a little shoe company you may have heard of: NIKE. Mr. & Mrs. Knight have donated so many kazillions to the University and everyone (except maybe those people at some school in Corvallis) is so grateful. Through gifts, the Knight's have completely renovated the ancient library into a national showpiece, built an entire law school, rebuilt the football stadium, helped get the track ready for the Olympic Trials and provided funds - and vision - for countless other projects on campus.

But the new basketball arena is the icing on the cake... or the lacing on the shoe, if you will. The Matthew Knight Arena, named after their late son, is now under construction on campus. The new arena, nicknamed "Matt Court" will be everything Mac Court isn't, but the bowl effect will be maintained. No skyboxes. This arena is for watching basketball (and volleyball). Now, in the Casanova Center, visitors can see the floor plan, the seating plan, and even try out the seats ordered for the new arena. 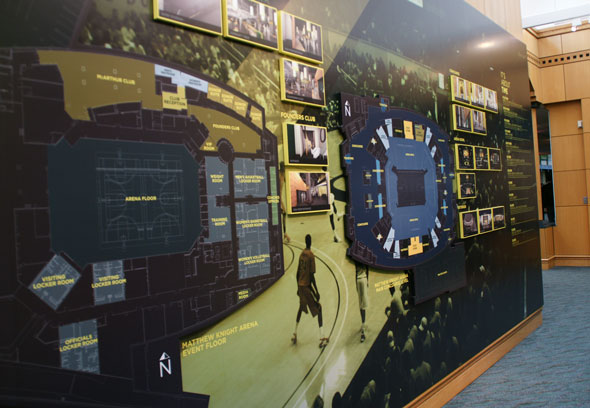 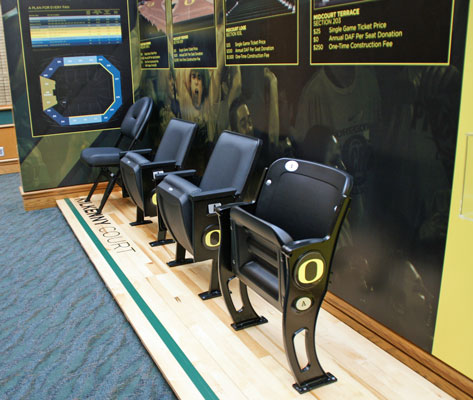 Take a load off and choose your seat

On display is a time-lapse video from the very first day of construction of the arena. Fast-motion view, or "how to build an arena in two minutes". Very cool. If you are ever in Eugene, go to the Cas Center and check-out the fabulous museum at the AD - hundreds of trophies and beautiful displays... plus a great gift shop selling all the green and yellow Duck gear you could ever need/want. 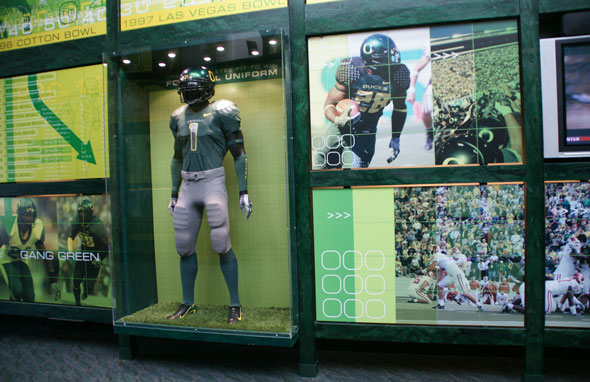 Still, football rules at the University of Oregon 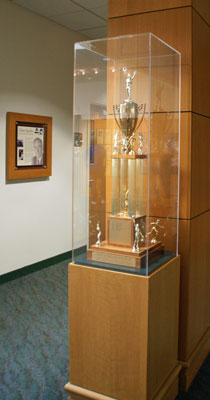 The Leo Harris Award is "presented to an alumnus letterman who has been out of college for twenty years and who has demonstrated continued service and leadership to the university. Harris was the University of Oregon's first Director of Intercollegiate Athletics. The recipient is chosen by the Athletic Director in consultation with the administration." Can anyone guess who won this award in 1997? Yup. My Driver!

The meeting over, we hit Highway 126 east and headed towards Bend. A sunny fall day, with the hillsides filled with colorful trees, we enjoyed our beautiful drive... so much in fact, we also drove the scenic McKenzie Pass Scenic Byway. This road is impossible in a RV, so we took advantage of the opportunity while we had the chance and such beautiful weather. 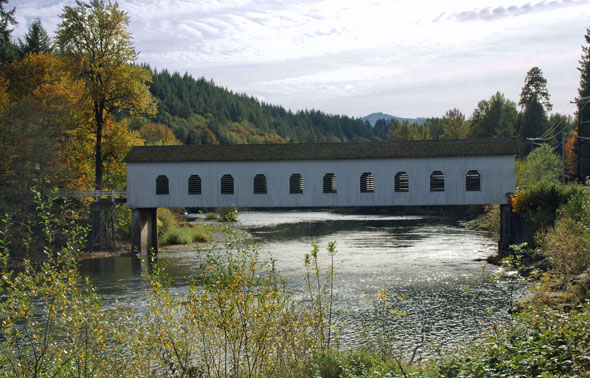 Do you all get tired of me gushing about the beauty of Oregon?

No. I will not stop. 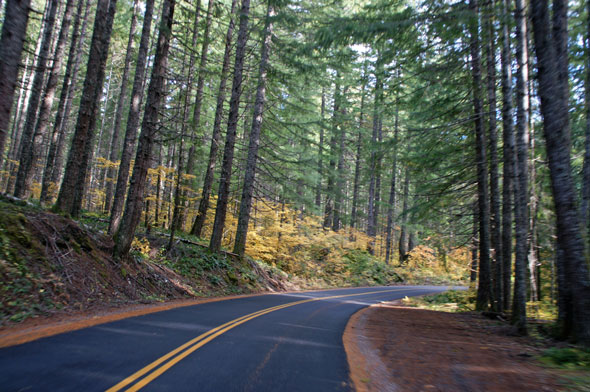 McKenzie Pass Scenic Byway: this photo is tame. DO NOT TAKE YOUR RV ON THIS ROAD
unless it is a B-Class. Do not tow on this road. It is steep. Winding. This is also the widest spot
on the entire road. Steep drop-off's. Sheer cliffs. Get the idea? 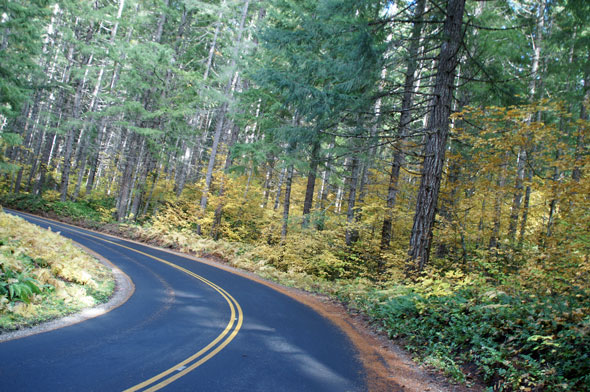 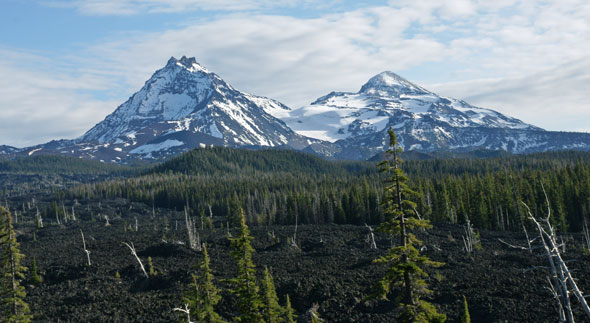 Two of the Three Sisters: North Sister (left) and Middle Sister (right).
South Sister is shy and is hiding behind her sister, North

At the top of the pass you will find a parking area and a pretty stone observation tower. From this point you can see (on a clear day) several Cascade mountains! Your eyes are not deceiving you - you are not on the moon - that is lava. Miles and miles of lava flow surround this area. Stunning and very different. I told you Oregon was cool. 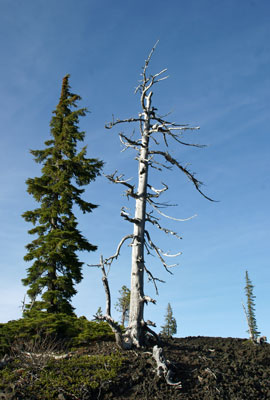 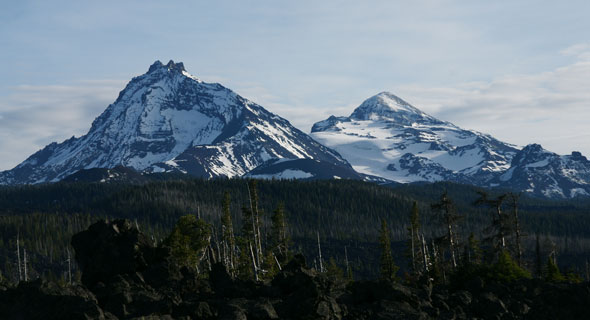 The Sisters are covered with snow year-round 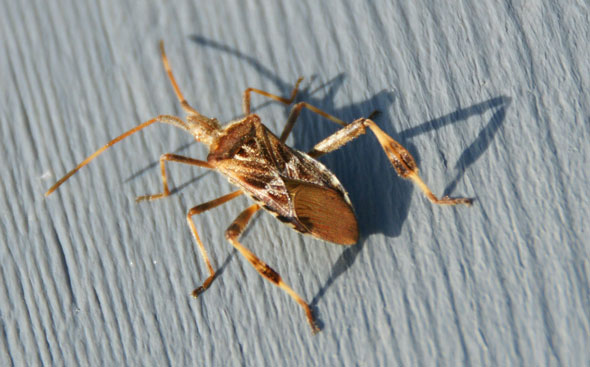 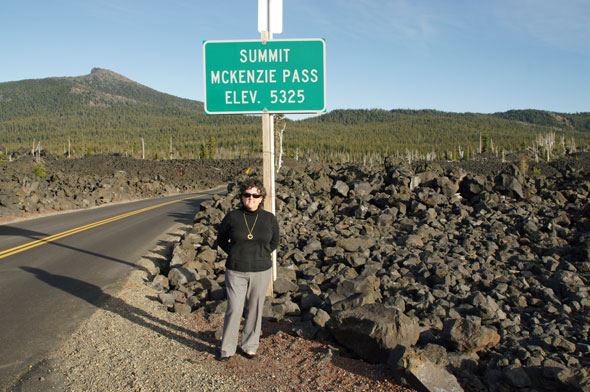 This photo is a personal joke... and personal homage... to my friends (and my brother)
who ride their bikes to the pass and have their photo taken at this same spot. The summer
my brother turned 50, he rode his bike from Sisters, Oregon to the top of this pass fifty times.
He's crazy, by the way. 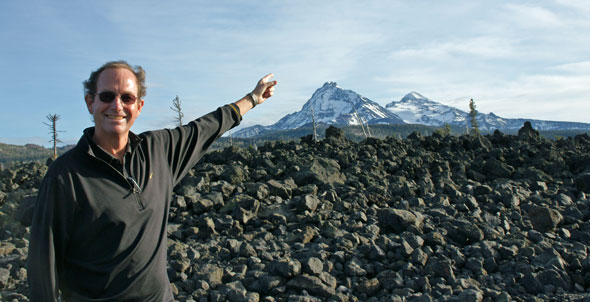 And just in case you can't find the Sisters...

We spent the evening with my parents. Dad made a huge pot of Chuckers & Noodles. (A Chucker is a small game bird, similar to a Partridge... my nephew trains Labrador Retrievers... and so this family has a large supply of game birds.) Yummy dinner.

Until my next update, I remain, your Oregon ambassadress correspondent.