Los Angeles, California: Such an active week. After our tour of Sunnylands Sunday, we all went to see Pink Martini (a very popular band from Portland, in town for a five-night stint) Tuesday night at the McCallum Theatre in Palm Desert. It was a very memorable night, with China Forbes and Storm Large singing - and with Storm Large nearly bringing down the house with her sexy impersonation/rendition of Madeline Kahn singing "I'm Tired" from Blazing Saddles - fake German accent and all.

With the concert on Tuesday, Dave and I missed our usual Tuesday ritual - testing out a different Happy Hour spot. No problem, our friends said they would take us to Happy Hour at the Hog's Breath Inn, in Old Town La Quinta, Wednesday. We went, only to discover the Hog's Breath Inn closed three years ago. Oops. (Thing is, we must have told a dozen people in our resort we were going to the Hog's Breath Wednesday and everyone had a "oh, yeah, we haven't been there in a while" comment, but no one actually knew - or told us - it was closed.) We went instead to Mexican food, so we were still happy.

Dave flew up to Portland Thursday for meetings and his brother, Steve, stopped back to our Bed & Breakfast on his return trip from Tucson. Steve and I made cocktails and I gave him the ten-cent tour of our resort in the golf cart, before going up to the clubhouse for dinner. It was a fun evening - just the two of us chatting away - but Steve had to hit the road early Friday morning and I wasn't far behind him. He was heading back to his ranch east of Sacramento, and I was pointed toward Los Angeles and my grandchildren. 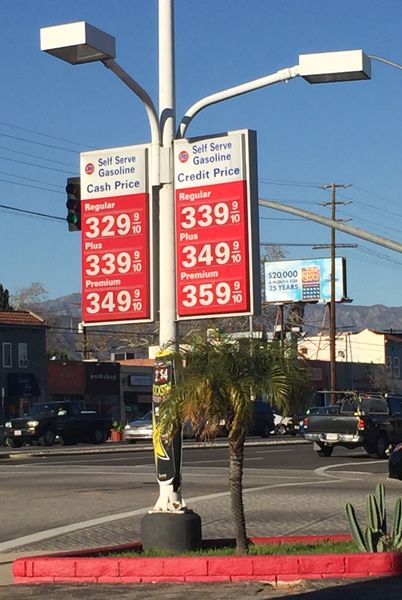 With all the cheap fuel in America, why did I pull into this service station? Seriously? My sister-in-law's sister lives in Houston and she filled up the other day for $1.40 per gallon. And why is it called a service station when I have to serve it my own dang self? 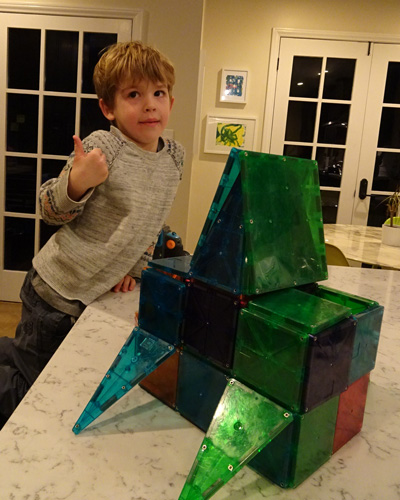 Leo worked on a very important Magna-Tiles contraption this evening - on the kitchen island, away from any "help" his little sister could offer.

He gave the thumbs up upon completion. When I asked to photograph his masterpiece, Leo grabbed his own digital camera (Playskool Digital Camera, great for kids and comes in different colors) and snapped away. 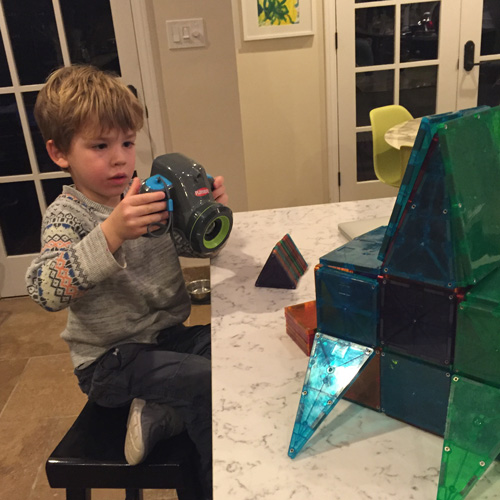 Lisa served spaghetti and (Gardein meatless) meatballs for the kids dinner. I tried one of Leo's meatballs - Lucy was not sharing - and found it incredibly good and was so surprised it was vegetarian/vegan. Adults had Ribollita - a minestrone-style soup with bread in the bowl.

You may remember, Our Lucy loves food. Any type. Any flavor. The messier, the better. 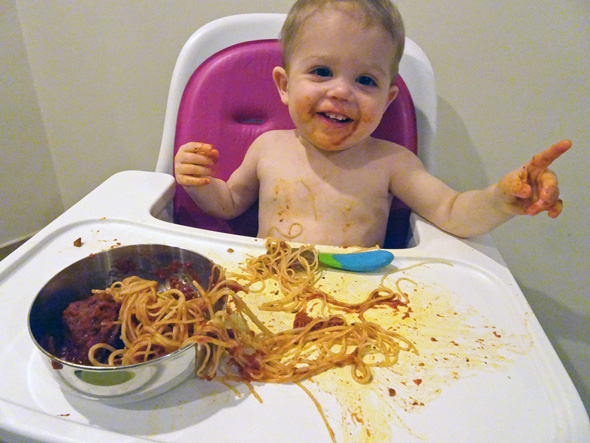 Watching this 18-pound 17-month old (I know, Lucy is so teeny) put away so much food is a sight to see. Where does she put it all? A card-carrying member of The Clean Plate Club. So intent on getting food into her belly, Lucy needs to eat while wearing as little clothing as possible, or Lisa and Lenny would need three sets of washer/dryers. Lucy is a typhoon around food. After this particularly-messy-stainy meal, she needed to be hosed-off in the kitchen sink before being carried to her bath. Just like her Bubbe, this one.