Eugene, Oregon: Like I've said before, if you need rain, just get your RV washed. Of course, it rained today in Eugene... and of course, there is a huge track meet this afternoon. Feh.

Our tech, Brian, has also returned to Oregon from Indio. He stopped by this morning to make sure that bay door never pops open again while we are driving down the road. We really didn't do much else. I have come down with a nasty cold. I blame it all on the slimy Oregon weather. I asked DT to take me back to Palm Springs, but he says we need to go home tomorrow. Why? He is so mean.

We headed over to Historic Hayward Field at 5p. Not only is tonight the famed Twilight Meet, the races coincide with the annual University of Oregon track & field alumni reunion. 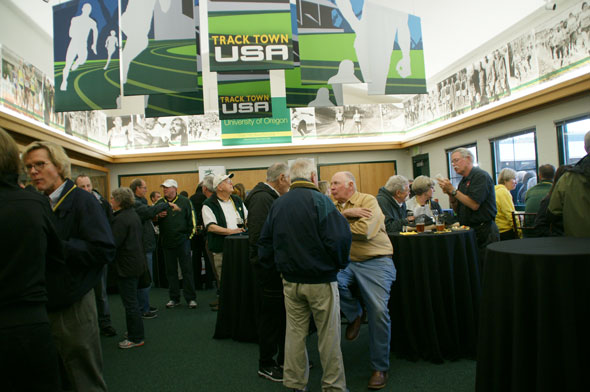 This is what a room filled with old runners, jumpers and throwers looks like. 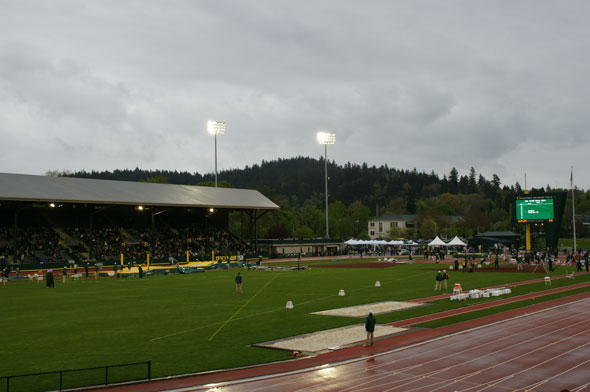 And this is what Historic Hayward Field looks like during a spring rainstorm... which, incidentally, happens pretty-much every day in the spring in Oregon. 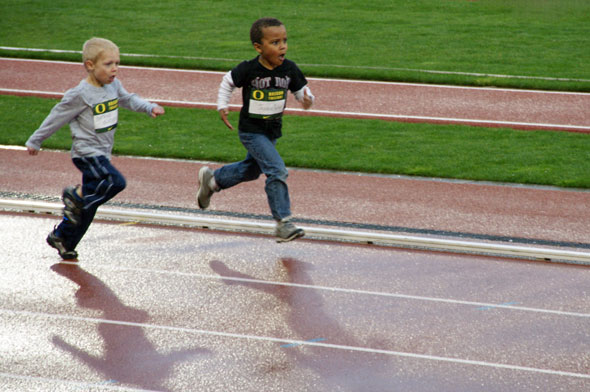 The Twilight is a great meet. Not only do the Ducks race, other colleges send runners, the pros race - anyone can run. They even have Greek relay races between the sorority and frat houses. The best part? They hold half-lap races for the little tots. The future athletes even get race bibs to wear! Half-laps are held for kids as young as three. Such fun. 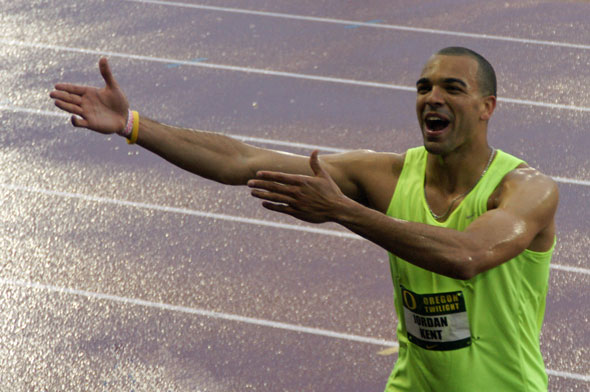 More fun? Old Ducks return to race again. Jordan Kent played basketball, football and ran track for the Oregon. He is the son of ex-Oregon basketball coach/player Ernie Kent. Jordan has played a few years in the NFL, but came back to Hayward today to win the 100m and the 400m. So there! Oregon football players LaMichael James and Kenyon Barner also raced today. Everyone was smokin'. See the race results here. 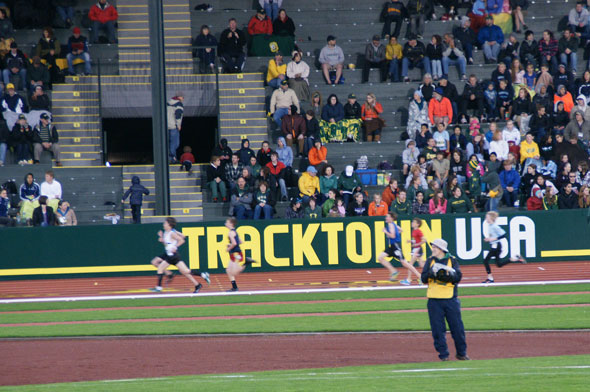 Historic Hayward Field is all spiffed-up with fancy new TrackTown USA signage! I love the new look. The grandstand seating will soon be repainted the same dark green.

Things were a little strange when for some unknown reason the organizers decided to play a short video (on the scoreboard!) about the storied life of long-time Oregon track coach & Nike co-founder, Bill Bowerman - during the men's 3000m race. I felt really bad for the racers. The story was narrated by Oregon alum, Hollywood actor Sam Shepard Sam Elliott. Sam Elliott has a great voice. 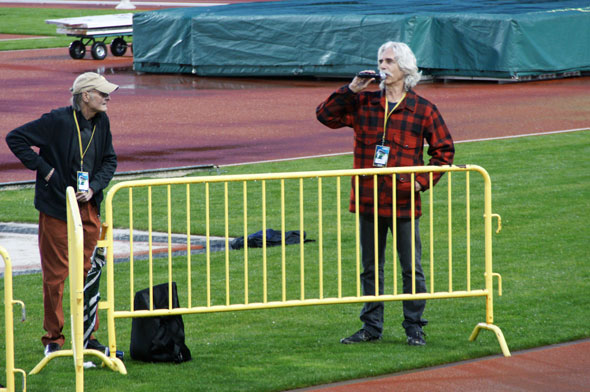 Builderman is a very nice tribute to Bill Bowerman, and I encourage you all to watch the 12 minute flick. 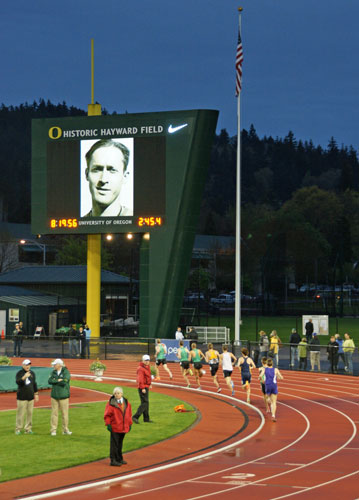 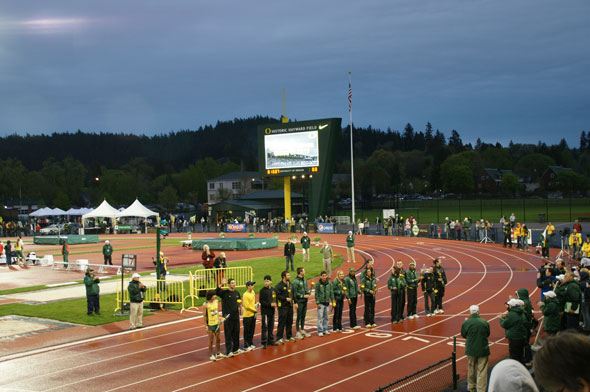 With all the "stuff" going on at the meet, I'm not sure how they found time to run any races. Here the graduating seniors are being honored. I'm going to miss these fine young athletes. Future WGA (World's Greatest Athlete) Ashton Eaton - was presented with the Jim Thorpe All-Around Award. With all the awards the world record holder is receiving, Mr. Eaton is going to need a larger house. Ashton Eaton won the 110m hurdles and the long jump tonight in his spare time.

But the future WGA met his match tonight - against an Oregon freshman!

The final race of the night - and a race anticipated all-over the world of track & field - was the Distance Medley Relay (DMR). Two teams competed, the Ducks and Oregon Track Club professionals. Distances in the medley are 1200m (Matt Centrowitz, Jr. v.Nick Symmonds), 400m (Michael Berry v Ashton Eaton), 800m (Elijah Greer v Tyler Mulder) and 1600m (AJ Acosta v Andrew Wheating). This race isn't held very often and the Ducks were hoping for a record earlier in the week, but with the weather turning so rainy and cold, I think that idea went right out window... where it promptly landed in a huge puddle. 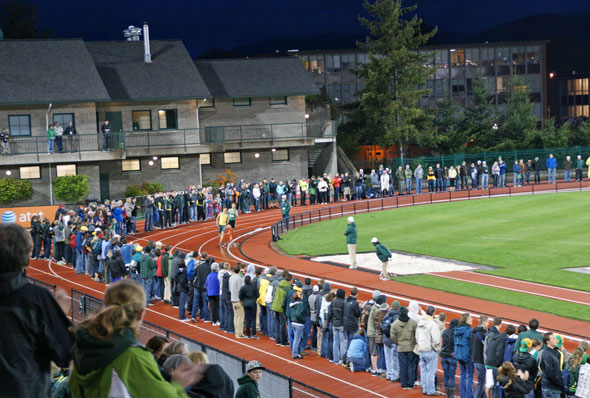 As is tradition at The Twilight, the fans are allowed onto the track for the big race of night. Fun! This race had a rabbit - a pacesetter who would run the first two laps and drop out. Funny thing? The pacesetter was required to carry a baton! In all my days at the track, I have never seen this before.

Matthew flew in the 1200m. Neither runner likes to take the lead, and he and Nick crossed the line neck-and-neck. Nick handed off to Ashton Eaton. Matt, Jr., handed off to Michael Berry. Michael Berry smoked Ashton in the 400m! (Okay, okay, so it was Ashton's 3rd event of the day.) Still, it was awesome. Tyler Mulder gained a little ground on Elijah Greer in the 800m and when they passed-off to the last runners, Duck AJ Acosta couldn't quite make-up the gap to the lean Mr. Wheating. Ducks lost by 2+ seconds! Not bad for a bunch of college kids.

Here is the race:

Andy Wheating talking with young fans after his race. 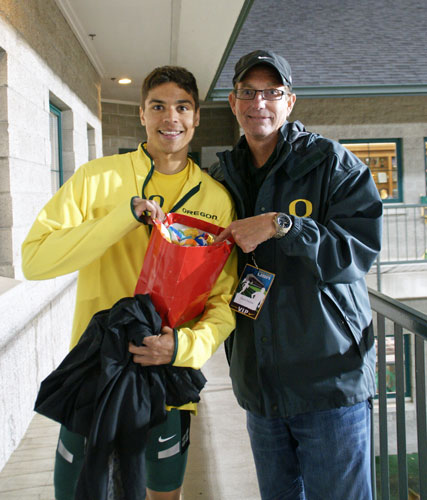 After cooling-down, Young Matt came up to see us in at the reunion get his package of cookies that some old lady keeps baking for him.

Do you think I'm making him fat?

I'm telling you - that kid kicked it tonight. He was amazing.

Until my next update, I remain, your "apparently we are going home tomorrow" correspondent.