Track Town, USA:  Amazing how things stay the same. DT ran in The Twilight Meet at Oregon in the 1970's. This track meet always holds exciting races, surprise last-minute entrants and the odd athlete trying to qualify for this or that. So much drama. This year The Twilight meet was held in the first evening of the two-day decathlon and heptathlon Pac-12 Championships. A track meet before a track meet.

Before heading over to Historic Hayward Field, we took a little trip down Memory Lane. 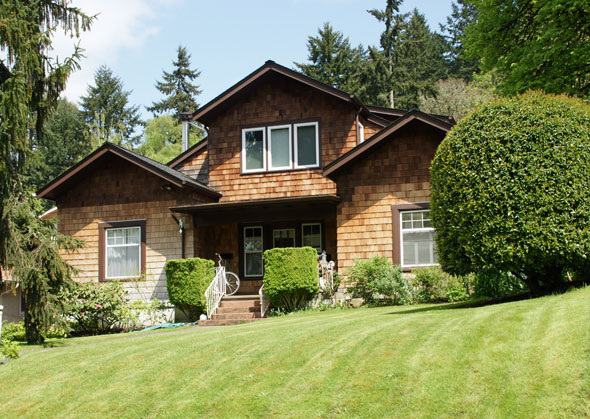 Or more specifically, Franklin Blvd. Circa 1977-ish, DT and I lived in this gorgeous home... except when we lived here it was not such a gorgeous home. In fact, it was an old dumpy house turned into a duplex. To the left of where the bicycle is parked on the front porch was another door, leading to an apartment that covered the left half of the downstairs and the entire upstairs. We rented the part that went through the front door in the center of the porch and the right half of the lower floor. Neither of us can recall our housemates. We think we paid $215 per month. I recall the kitchen was ridiculously small. Flash-forward to the present day and someone has turned the duplex-that-once-was-a-house back into a house! The cedar shake siding is new. The windows are new. We had to drive past the place twice to make sure it actually was the place we rented 35 years ago.

As long as we were in the area, we decided to drive up to Hendrick's Park to revisit where DT used to run in the olden days. On the way to the park, we passed Pre's Rock, the spot where Oregon track star Steve Prefontaine crashed his car and died in 1975. Neither of us had visited the site of Steve's death in years. 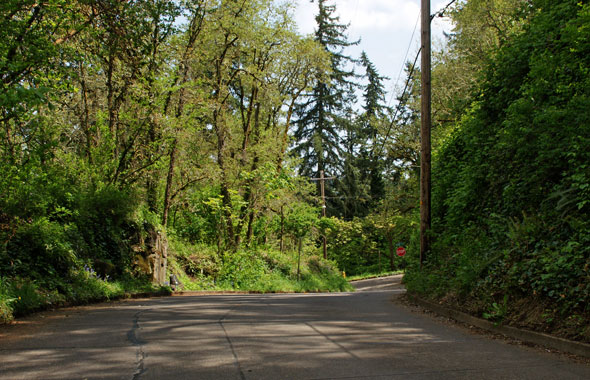 On 29 May 1975, Steve Prefontaine ran his last race - it was a 5000m at Hayward Field. Pre won the race, Frank Shorter was second and our own DT was third. Later that evening, after dropping Frank Shorter off at a nearby house, Prefontaine crashed his car into the rock embankment pictured on the left side of the above photo. Though controversial stories abound about how the accident occurred, his MGB flipped over and Steve was crushed by the weight of the car.

Over the years, thousands of tributes have been left at the site. Every week or so, someone removes the momentos. Not sure where they go - a museum or a dumpster - but it is very common for young runners to leave their race bibs or medals here as a tribute to the spirit of "Pre". 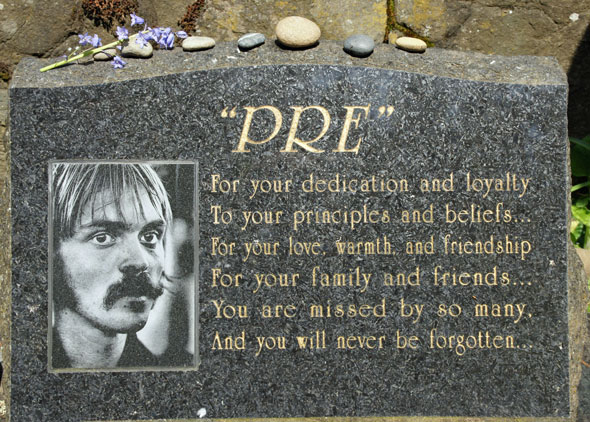 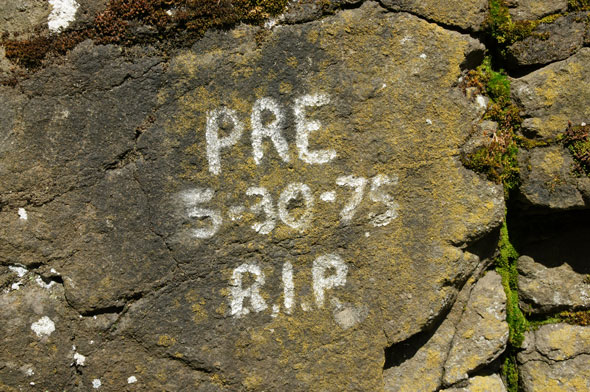 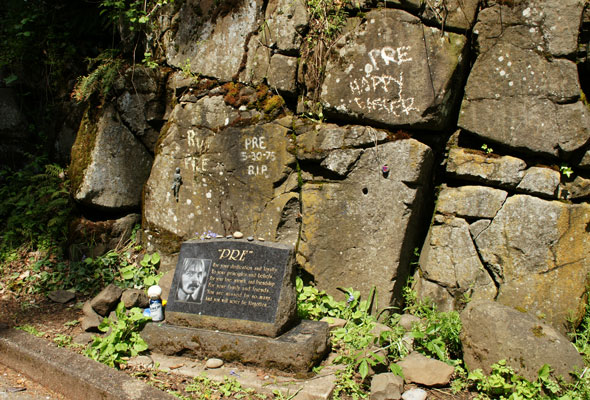 I was on staff of the University of Oregon student newspaper when Pre died. The staff was so shaken, it was difficult to get the paper out that day. He was Dave's teammate. He was our friend. We were all so young, it was nearly impossible to believe one of us could die.

After this cheerful thought, we went to the track to watch the first day of the Pac-12 Heptathlon and Decathlon. 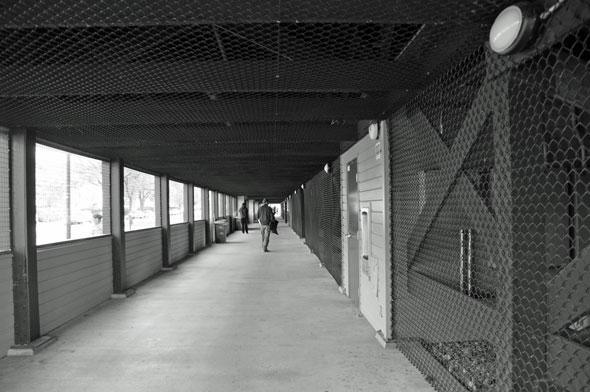 How many times do you suppose DT has walked along this corridor under the old grandstands at Historic Hayward Field? 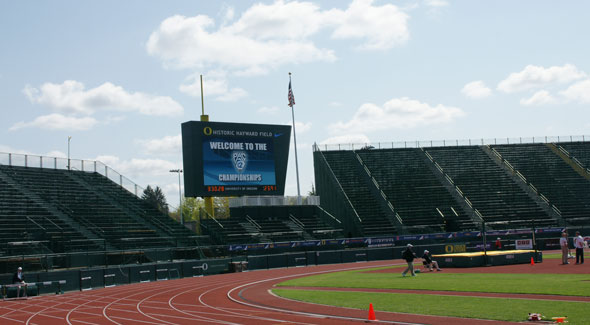 The temporary grandstands that will be used for the Olympic Trials are in place! 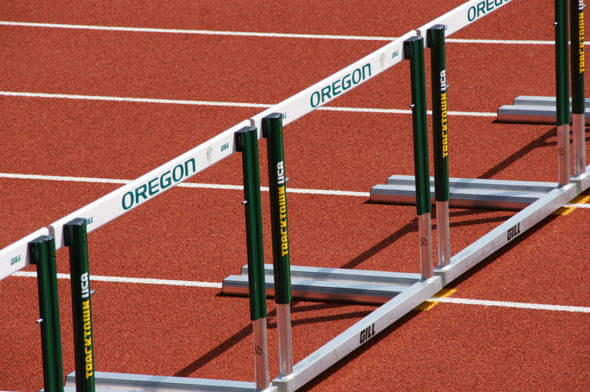 The Ducks have shiny new hurdles - complete with TRACKTOWN USA painted down one side. Fancy!

We watched Duck Brianne Theisen finish four events today - here she races in the 200m. Brianne left the field today in first place, with three more events to finish in the morning. Miss Theisen is engaged to Future World's Greatest Athlete, Ashton Eaton. While we love her as a Duck, Brianne, a native of Saskatchewan, will be competing for Canada in the London Olympics.

Then the Twilight Meet began, and we stayed until the last exciting race at 9p when we were nearly frozen solid from the 50 degree temperatures and biting wind. See race results here. Mr. Eaton competed in a few events today. I took a photo of him racing the 110m hurdles, but he was too fast and the photo was blurry:

Of course, he won.

Another star Duck athlete completed in a few events today. Football running back De'Anthony Thomas has made the Oregon track team (along with a few other football players). A fabulous high school sprinter, the guy can really fly with a football, so all the trackies were hoping he would try-out for the team. 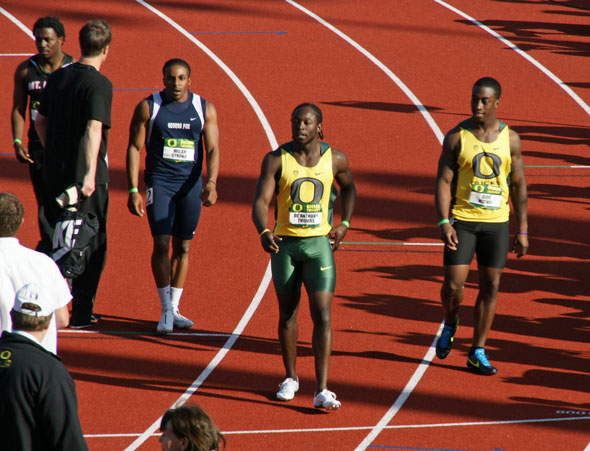 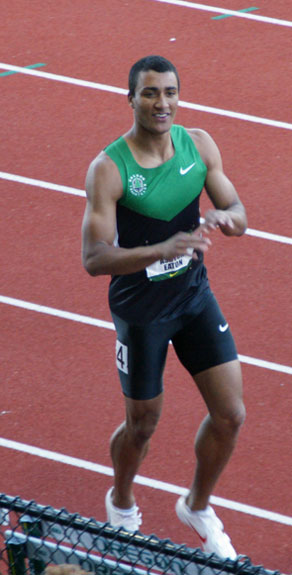 But the crowd favorite is still Ashton Eaton. Now a Duck alum, Mr. Eaton races for Oregon Track Club Elite. He lives and trains in Eugene and is a native of Bend, Oregon. The Olympic Trials begin in 7 short weeks.

Tomorrow, we will return to Historic Hayward Field for the last day of the Decathlon and Heptathlon... and then I think we will go home.

This is our last night on the road.

Until my next update, I remain, your trackside correspondent.

RV PARK:  Premier RV Resort. I-5, exit 199 in Coburg (just north of Eugene). Paved pull-through full-service sites, free wifi, newspaper delivered to your door, hot tub in season. Very convenient to all the RV repair and maintenance services in the local area and across the freeway from Monaco and Cummins. Freeway noise and lots of live-ins, but we love to stay here because of the convenience to everything we need in the area. Friendly owner on-site.