Before I tell you all the exciting news from the track, I need to show you two photos from last night that (somehow) never made it into my column: 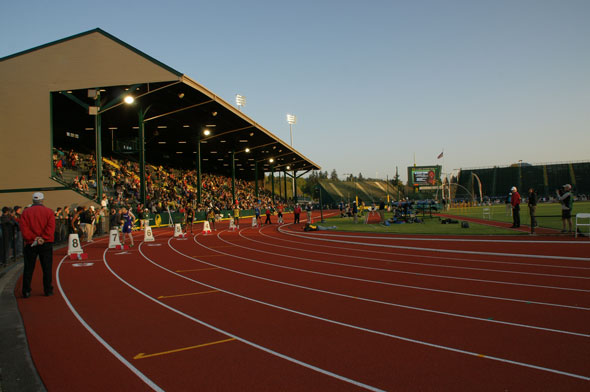 This is a photo of nothing - the guys were getting ready to race a 200m - but I just love the light in the photo and I just love that it is 8 o'clock on a Saturday night in a college town and the grandstands are full. 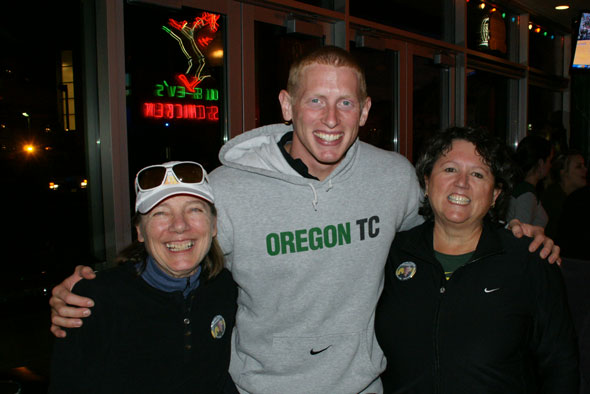 An always-sober athlete with two tipsy tracksters: Jules, Cyrus & me

If I hadn't cropped all the beer glasses off from the bottom of this photo, you would probably realize why I forgot to post this photo last night. It was taken around 10p - after the last event at the track, when a bunch of us had migrated to a local watering hole to warm-up and get some food in our bellies. My friend, Jules, and I posed with our friend, Cyrus Hostetler, who stopped in to say hello. Cyrus is a Duck alum and is training to make the US Olympic team in the javelin. Cyrus is also working with DT to plan the Olympic Trials event. DT feels Cyrus has a very good chance to make the US team! Cyrus is not only a native Oregonian - he was raised just over the hill from us. Check out his fantastic website - he designed it himself!

This morning, we packed up the bus and brought in all the satellite dishes and slide-rooms before heading over to Historic Hayward Field for the second day of the heptathlon and decathlon. The sun was shining, it was a beautiful day and the temperature rose to nearly 60°! 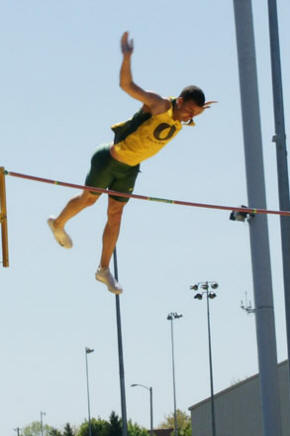 Another Oregon native, Dakota Keys was in the lead. Keys had a fantastic pole vault series and then threw a massive javelin and was in the lead with one event to go - the 1500m. Imagine, after racing 100m, long jumping, throwing the shot put, high jumping and racing 400 meters yesterday, to have to come back on the second day to race the 110m hurdles, throw the discus, pole vault, throw the javelin... and then, just to crush whatever energy is left - race a mile? This is why a decathlete (to me) will always be the purest and most perfect athlete. Plus, they are most always gorgeous, have amazing bodies and you know they must be just a little crazy! 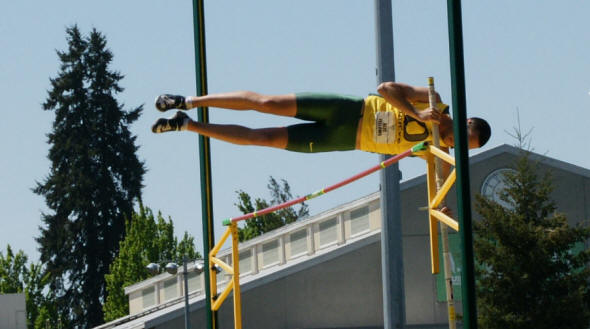 My Ducks had two men in the decathlon - both freshmen by the way. This is Alec Fellows. How is is even possible to get yourself up 15 feet in the air with a pole and hoist your body over a stick? During the competition today, two poles snapped while the athlete hovered up in the air, completely relying on the pole to get them up and over the bar. The sound is horrid. Both times I closed my eyes, unwilling to watch what could be a terrible accident. Both times today, the athletes landed safely in the soft pad below the bar, but one UCLA athlete had to withdraw as his hands were so traumatized from the vibration in the pole when the stick snapped - in FOUR PIECES! At the end of the day, Mr. Keys won the Pac-12 Decathlon title - as a freshman! Dude is married! Mr. Fellows finished eighth.

Winning wasn't enough for the fantastic Brianne Theisen. She needed to earn at least 6150 points to make the heptathlon (100m hurdles, high jump, shot put, 200m, long jump, javelin & 800m) Olympic Standard. (Yes, the Olympics have standards. An athlete in any event must meet certain criteria. Even if you are the fastest runner in your country, if you have not run the time required to enter the Olympics games, you stay home and watch it on TV.)

Not only did Miss Theisen cover the standard, she scored 6353 points, won the meet, broke the Pac-12 record, became number three in all NCAA history and #2 in Canadian history (Brianne is Canadian) - Brianne is now the World Leader! Chicks in Russia are scared of Our Gorgeous Duckling! 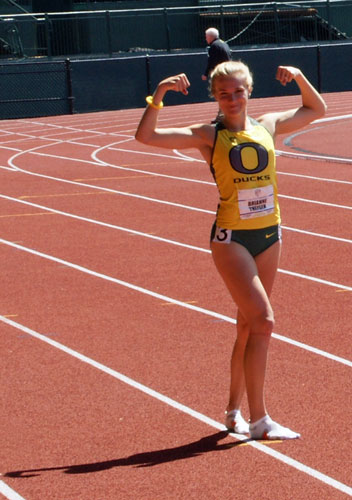 After her victory, the lovely lady posed in front of her teammates - who were jumping up and down and cheering for her wonderful accomplishment. What a great day for the Oregon Ducks!

(Not to mention Canada.)

Too much excitement for these old folks. We went back to the RV park, hitched-up the Honda and drove the final two hours north to our house, where I am pretty sure the kitchen is larger than our entire RV. Everything seems so roomy. Spacious. We moved into this house 18 years ago yesterday. 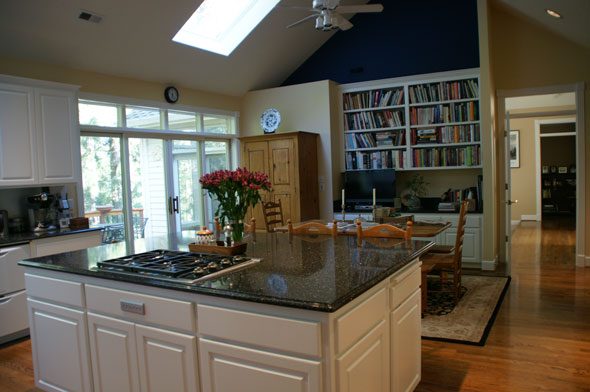 Yes, that is three weeks of mail piled-up on the kitchen table

Happy to be home - for a few days - and happy we enjoyed another fun, safe trip.

Trip stats: We definitely met the Olympic Standard for vacationing. Possibly medaled? 2,598 miles and an amazing 147 nights. Technically, DT flew home three times during this trip and we spent many nights in hotels while visiting the kids in Los Angeles. Spending so much time with The Cutest Baby Ever made this trip so much fun!

Until my next update, I remain, your "there's no place like home, except your motorhome" correspondent.

« The Twilight Checking the Perimeter »