Indio, California: The season is winding down in the ol’ trailer park. Only about 100 motorcoaches remain. Most have gone home for the summer… however summeris relative. Look what greeted Colleen and Rick on their return to Calgary: 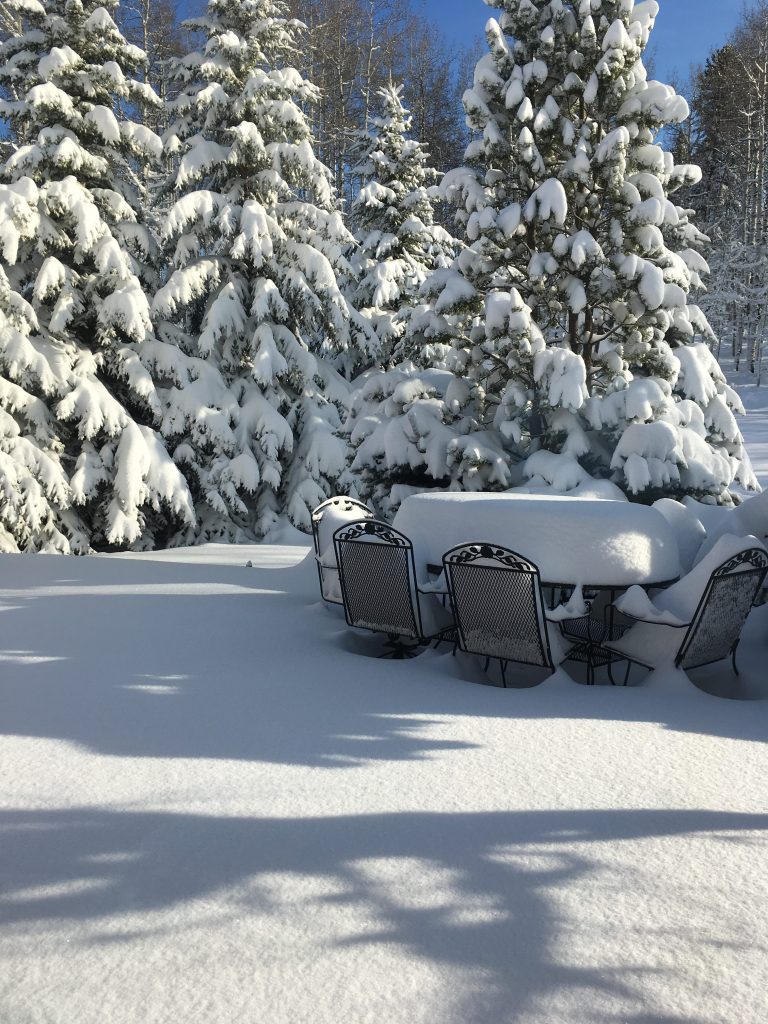 For me, the season ends at the Motorcoach Country Club when the restaurant, Top of the Falls, closes for the season. Even though we don’t get up there more than once-or-twice per week, the clubhouse serves as the gathering spot (especially the bar) for residents.

The last official night of the restaurant was Monday, as the restaurant is always closed on Tuesday. Though we have already burned-through our food & beverage minimum ($1500 per year per campsite), Dave and I went up to the clubhouse for one last meal (from the bar menu) Monday night.

But the restaurant manager, Byron, did something different this year: he opened on a Tuesday, throwing a party for the 100+ members and all of the staff. Our restaurant crew were asked to arrive for a one-hour shift – from 5-6p. The kitchen staff set-up a Mexican food buffet line, which was served by our chef, Manny. Enchiladas, salads, rice, beans, and donut-shaped churros.

For one hour, the bartenders served drinks. Every drink was served in a plastic cup and no one wore their usual uniform. No martini glasses tonight. Casual Tuesday. 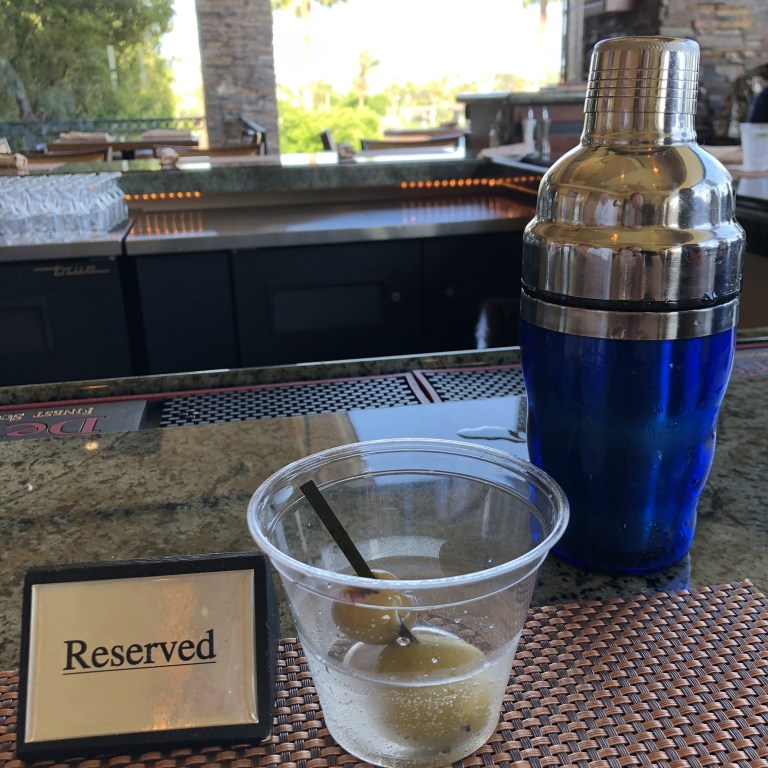 I did have a reserved seat at the bar. First time ever. We saw a lot of firsts tonight. 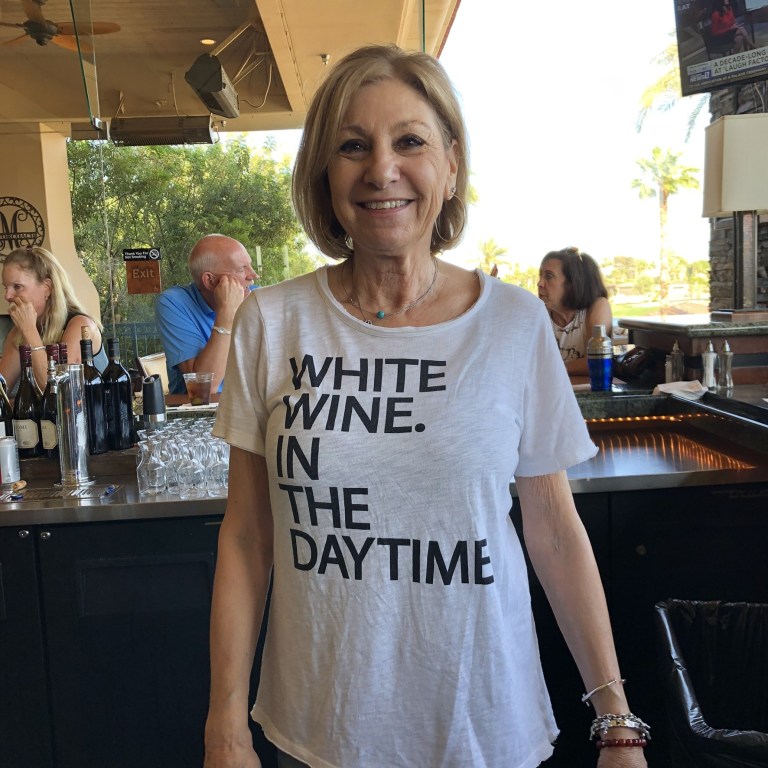 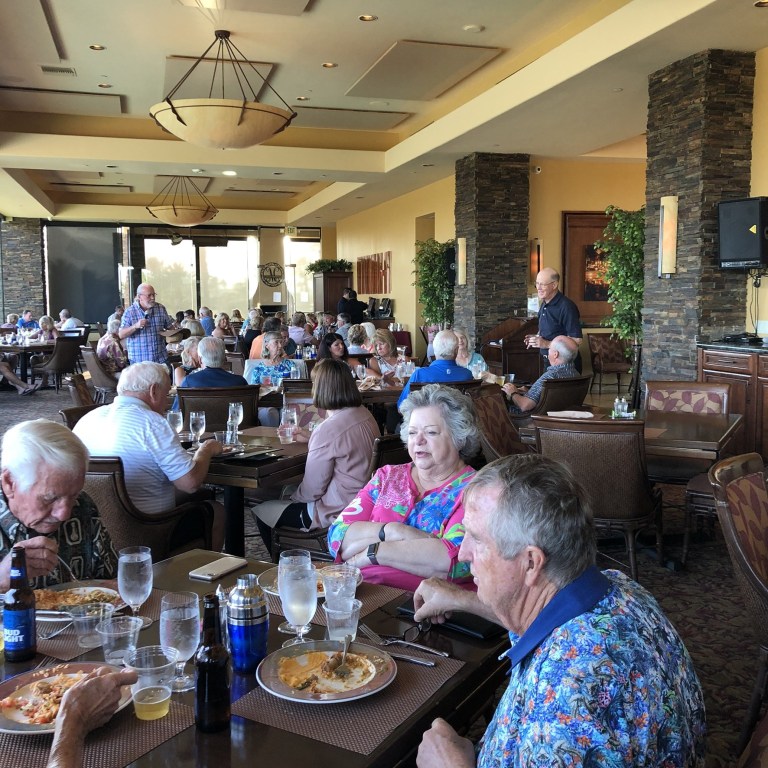 Another rare site? The always-elegant Art, our maître d′ and sommelier (standing, far right, in blue shirt) without his usual coat and tie, drinking wine from a plastic cup. The other man standing (with microphone) was in charge of passing the hat for end-of-season tips for the staff.

At six o’clock, Byron announced the staff was to clock-out, join the party, get something to eat/drink, and that for the rest of the evening drinks were on the house!

Fearing a frenzy, we decided to head over to Mary and Captain Jim’s where I knew she had just cracked a bottle of my favorite pinot grigio. (Drinks on the house at their house.)

It was a wonderful evening and we will really miss the staff at Top of the Falls. We are quite fond of our staff and get to know them well, as most have worked at the Motorcoach Country Club for years and years.

Dave and I plan to hit the highway Wednesday morning – 8th of May.

Until my next update, I remain, your verklempt correspondent.