Indio, California: I just casually mentioned My Driver falling Wednesday evening. In truth, he really messed-up his arms. Dave was carrying several items wrapped in his arms, tripped stepping from the boat onto our dock, and landed on his forearms. Nothing he was carrying was broken and he did not break a bone. (He did break the face of his watch.) (Insert sad face here.) His arms look like ground beef… and not the fancy low-fat grass-fed organic stuff. The bruising is the worst! I took photos in the hospital, but they are too revolting to show on this family-friendly website. The photos will, however, change the mind of any health insurance agent thinking his fall did not justify a trip to the emergency room.

He can’t really work-out – his arms are entirely wrapped in gauzy-stuff – because he shouldn’t really sweat… but since we are in Indio in April, there is a lot of sweating anyway. He has taken to riding his bicycle slowly around the RV park, instead of heading-out into the countryside as usual. We have to wrap his arms in cling film/plastic bags so he can shower. The physician and nurse suggested he wear the bandages for 3-4 days or until the wounds stop bleeding. They are still bleeding.

The kids went home. We took the time to clean our bus, get ready for Passover, and pre-organize ourselves for our trip north next month. 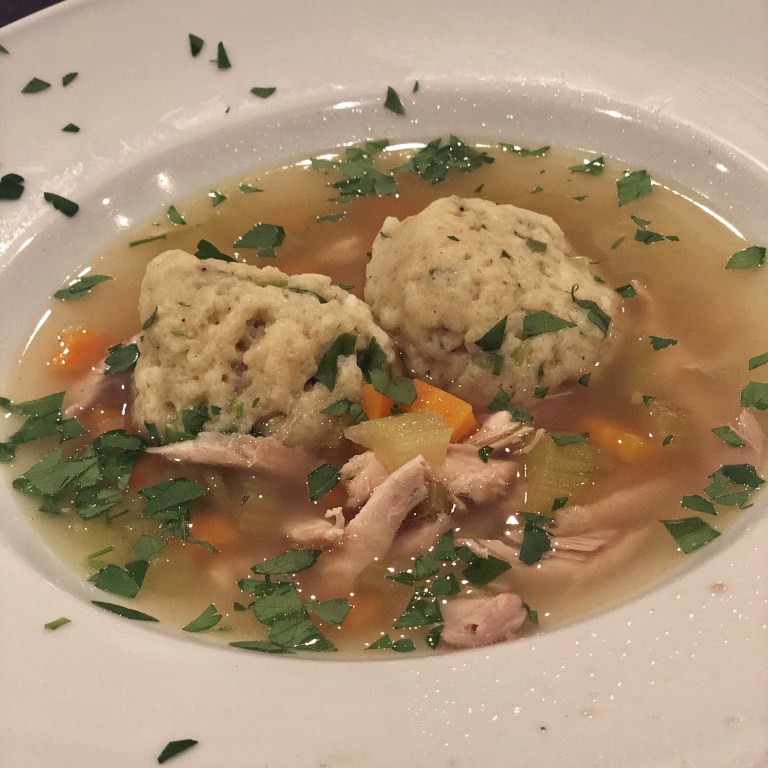 Of course we had matzo ball soup on the second night of Passover, in a home-made chicken stock, loaded with veggies and shredded chicken, garnished with parsley from our herb garden.

As we were enjoying coffee this morning, we heard a glorious choir – with loud music wafting through the air. It was too loud to be the few worshipers who usually gather in the Yacht Club in our resort for Sunday service. We realized it was Kanye West and his much-anticipated (by his fans) Easter Sunday “church” from the Coachella Music Festival. In all the years we have been hearing music (mostly bass) float over the mile-or-so from the festival grounds, this was the loudest music we have heard. Louder than Madonna. Louder than Paul McCartney. Dare I say… louder than Beyoncé?

I opened up the Coachella YouTube channel to see what was going on. There were at least a hundred greyish/purple/lilac-gowned gospel singers belting-out traditional Christian songs. For a while, I could not even see Kanye West in the crowd. Finally the camera panned-over to a man sitting at a piano. It was Kanye, but not the Kanye we are used to seeing. No MAGA hat on his head, Mr. West was dressed in the same pastel purple garb as the choir. His wife and kids were there as well (in the same pastel robe-type outfits). It was like a lilac-dyed revival meeting, and definitely the best music I’ve ever heard from Kanye West… mostly because it sounded like… well, music.

Kanye was selling “TRUST GOD” t-shirts. For $70. Each. I would estimate 25,000 people attended “church” this morning at Coachella.

The wind has been wicked. Though breezy during the day, the wind has been a relentless tempest the past few evenings, causing our motorhome to rock and everything to be coated in a thick layer or dust. I feel bad for all the kids breathing-in all that sandy air at the music festival… not to mention Miss Ariana Grande having to sing in these conditions.

Until my next update, I remain, your music critic correspondent.