TrackTown, USA:  Dave and I threw a few things together Friday afternoon and drove two hours south to Eugene, Oregon to attend the 42nd Annual Prefontaine Classic track meet. But the meet is never called the Prefontaine Classic, it is always referred to as "The Pre" and is the athletes most favorite meet of the season.

The past few years, the event organizers have included a "distance carnival" (lots of longer distance races) the night before the meet. The temperatures are cooler in the evening (conditions favored by racers), but mostly because the Prefontaine Classic is televised and not many television viewers would sit through runners making left turns for thirty minutes - so the meet organizers stage these races the night before the Pre Classic, throw-open the gates to Historic Hayward Field and invite everyone to attend, free of charge. 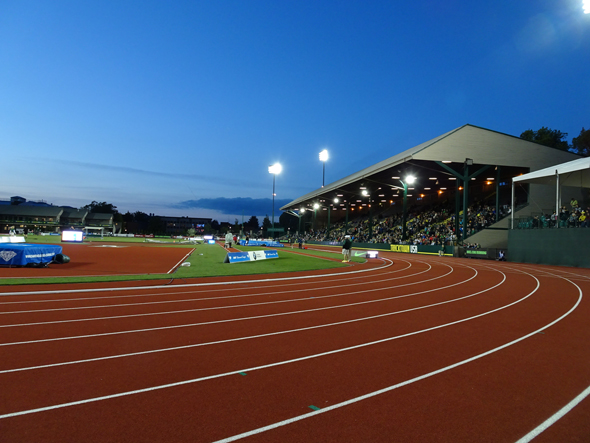 We were there front and center to catch every moment. 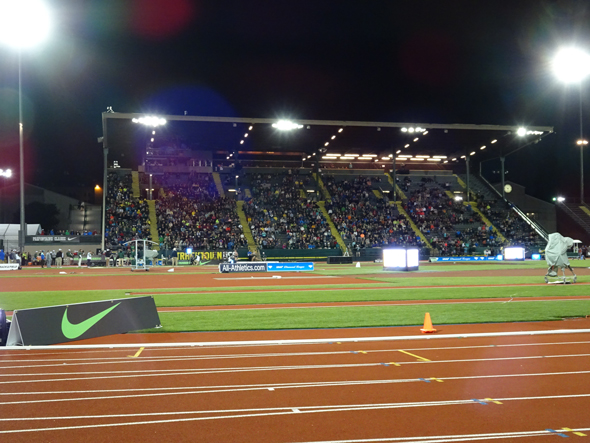 This is what happens on a Friday night in a college town? Yep. Thousands of people show up to watch distance races. 100m dash down the straight-away? That's for wimps. Try running over six miles on the track.

Not too many track fans would miss the chance to watch the world champion run 10000 meters. England's Mo Farah finished in 26.53 minutes - that's about 64 seconds per lap - for 24 laps! Mr. Farah won gold medals in the 5000 and 10000 meter races at the London Olympics and also won both events at the World Track & Field Championships last summer in Beijing, and two years prior at the Moscow championships. He is the King of Distance. The King. Farah lives and trains in Portland, Oregon. He is married, with four children.

Also this evening, a very select group of gentlemen gathered in Eugene. Anyone who had run a sub-4-minute mile while being coached by Bill Bowerman was invited. Nine attended.

(NOTE: Before I get a emails... Bowerman had retired before DT arrived to run for the University of Oregon. Dave was coached by Bill Dellinger and was not a miler. DT raced 5000 and 10000 meters and cross country.)

Saturday morning (we had a hotel room across the street from the University), we were back at the track to watch the Prefontaine Classic. 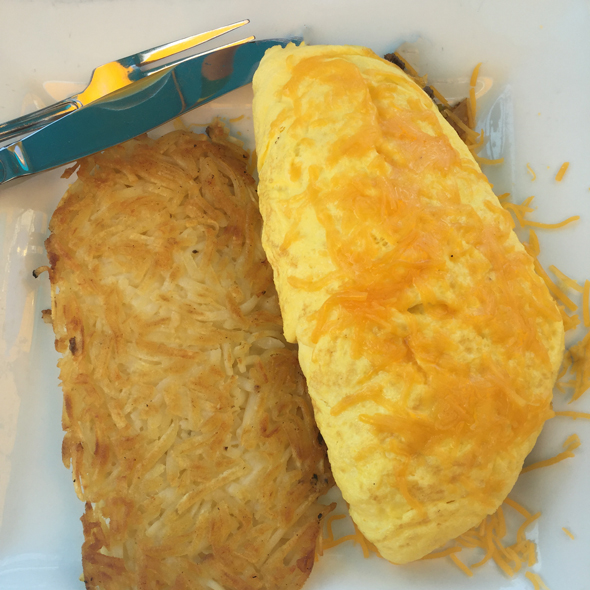 But first a little fuel. Little? I couldn't eat half of this football-size omelet. And how about a little garnish? A few parsley flakes? Something? Anything? Not even the obligatory orange slice graced this plate. Seriously.

The weather was perfect - warm and sunny, and just the hint of a breeze. The best athletes in the world had gathered in Eugene. The grandstands were full. 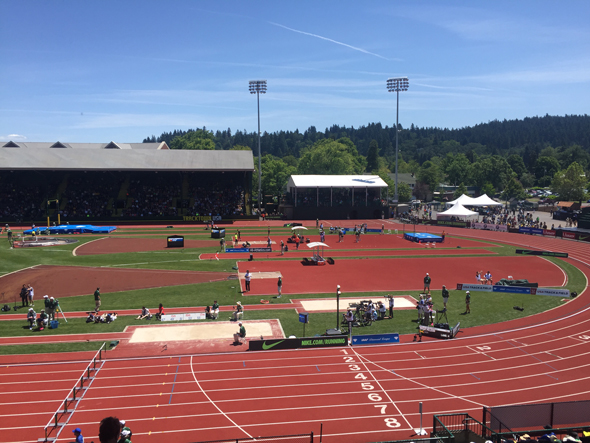 We had seats just above the finish line and high enough to witness every step, jump and throw. It was another amazing meet (complete results here), but some of my favorite memories have nothing to do with results. 41-year-old American distance star, Bernard Legat, dropped-out of the 5000m in front of the finish-line. He received a standing ovation. The eventual winner, Muktar Edris of Ethiopia, was not interviewed by the infield announcer. But Legat was, and after telling the crowd he would return for the Olympic Trials, Legat was given a second standing ovation. For dropping out? Along the same theme, Sanya Richards-Ross (retiring after this season) finished last in the 400m, and was interviewed by the infield announcer. Another standing ovation. Dang, Eugene track fans love their heroes!

American Tori Bowie won the 200m dash, racing under 22 seconds for the first time in her career. Kendra Harrison set a new American record (12.24) in the women's 100m hurdle event. Emma Coburn set an American record (8:59.97) in the steeplechase. Two convicted-and-sentenced drug cheats raced in the men's 100m and one of them won.

The premier event in this premier meet is the Bowerman Mile. Only the fastest men in the world are invited to race. Reigning champ Asbel Kiprop of Kenya won his third-straight Bowerman mile in 3:51, leading all twelve competitors to finish in under 4 minutes. One of the racers was Andrew Hunter, a high school senior from Virginia. Hunter will run for the Ducks next year.

Another wonderful Prefontaine Classic in the books. The organizers did a splendid job and, again, the competitors were the best in the world.

When the races finished, we drove back to Portland and took Lisa's godmother to dinner.

Until my next update, I remain, your "that was fast" correspondent.
« Pittock Mansion Experimenting with Simple »