Portland, Oregon:  Never mind this weather - we have people to see and things to do! Martin and Shirley invited us to join them this morning to tour through Portland's Pittock Mansion. Compared to all the ancient castles, National Trust Gardens - not to mention actual Stonehenge - they take us to tour when we visit England... our little 102-year-old manse is all we have to offer.

The house was built by Georgiana and Henry Pittock as their family home. It sits on a perfect hilltop overlooking Portland and the Willamette River, with views (on a clear day) east to Mt. Hood, Mount St. Helen, Mt. Adams and probably Mt. Rainier on a very very clear day. The house has 47 rooms - four bedrooms, countless sitting rooms, a full kitchen with walk-in refrigeration, many baths, and elevator, a dumb-waiter and quarters for four servants in the attic. There is also a carriage house and a stable. At one time there were also greenhouses and a tennis court.

Mr. Pittock (born in England, raised in Pennsylvannia and arrived to Portland while still a teen) was the publisher of the (somehow-still-in-business) Oregonian newspaper and grew to be quite the local tycoon via business in lumber and paper milling. An avid outdoorsman, Pittock climbed Mt. Hood four times. But people get old, people die and families move on... but the citizens of Portland decided to not let this property falter, so raised funds to buy the house and 47 acres to preserved the estate when the family could no longer keep the property. It is operated as a park. There is no cost to tour the grounds; $10 for adults to enter the house for a guided or self-guided tour. 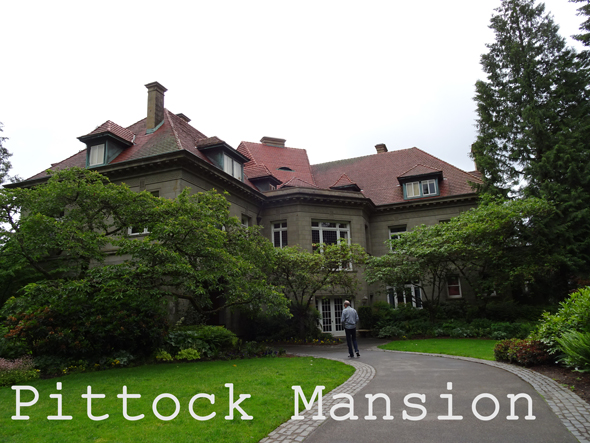 Dave walking up to the mansion

You may recall Dave and I went to a reception at this mansion in March hosted by Portland Mayor Hales, welcoming dignitaries (and we mere peons) to the World Championships. 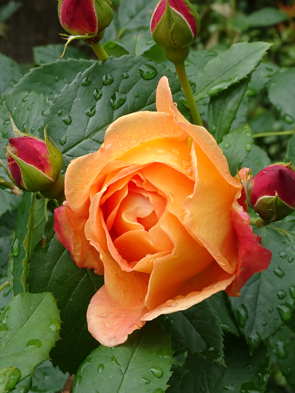 The flowers are "hanging in there" due to all the rain 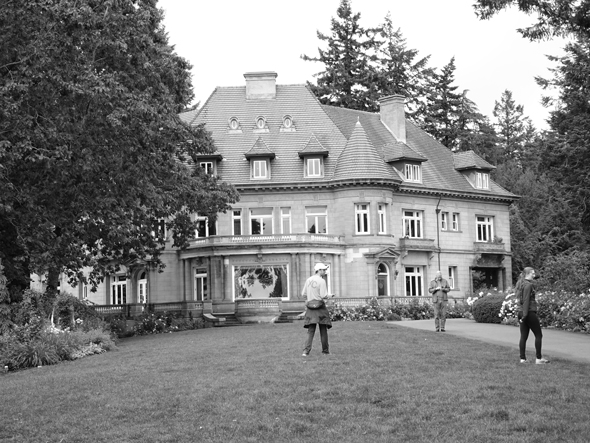 The front of Pittock Mansion (from the east) 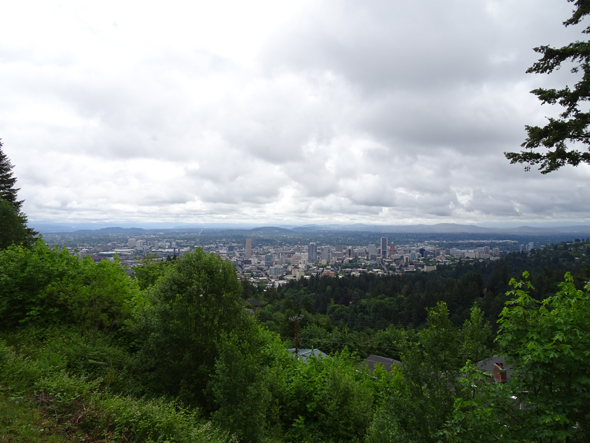 The view from the house looks east - but today we couldn't see much east of Portland. 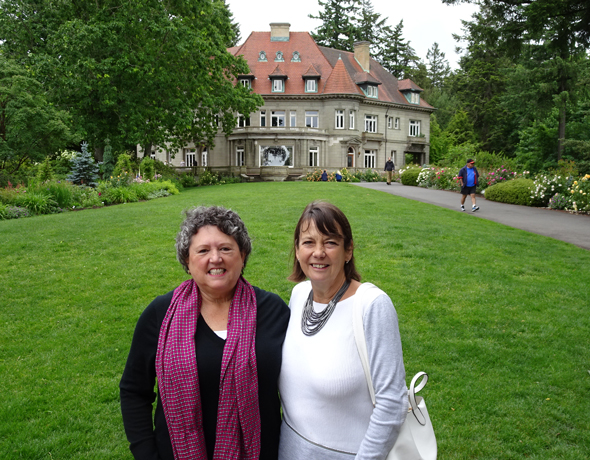 After a tour through the gardens, we bought tickets and gave ourselves a self-guided tour of the beautiful home. 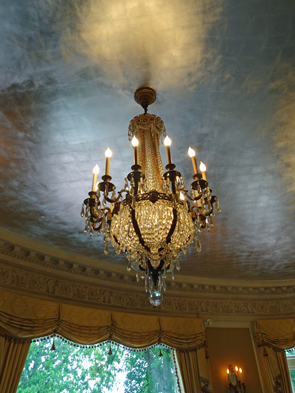 Marble staircase - and the house had electric lights, electric plugs and get this - a central vacuum. 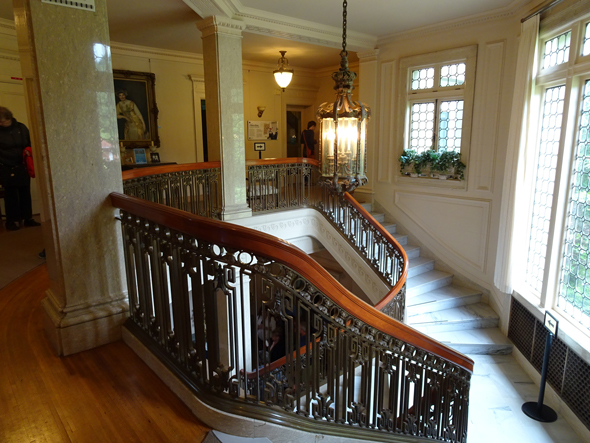 Beautiful curved staircase - the house has so many windows 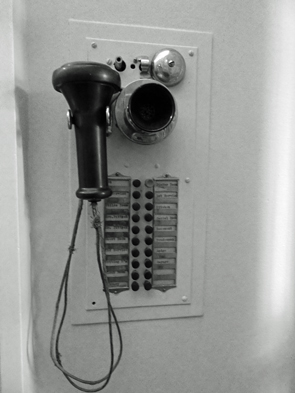 Turkish "smoking room" - the ceiling was hand-painted. The house had an intercom system. Each button is labeled with the name of a room. Even the driver in the carriage house was on the system. 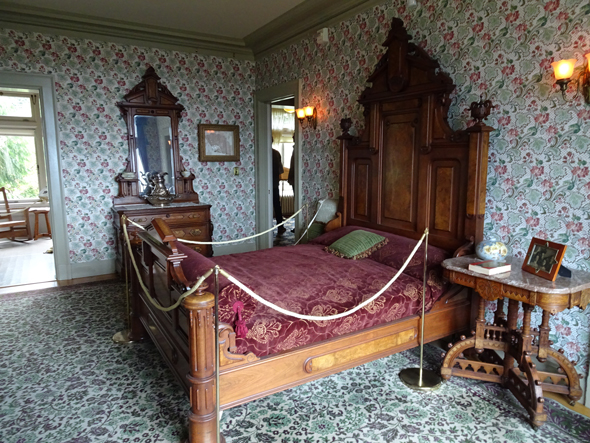 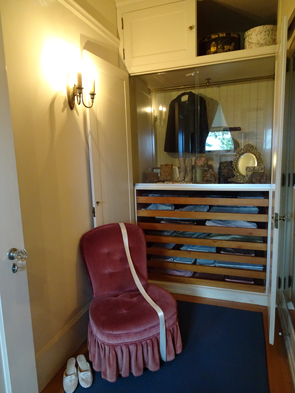 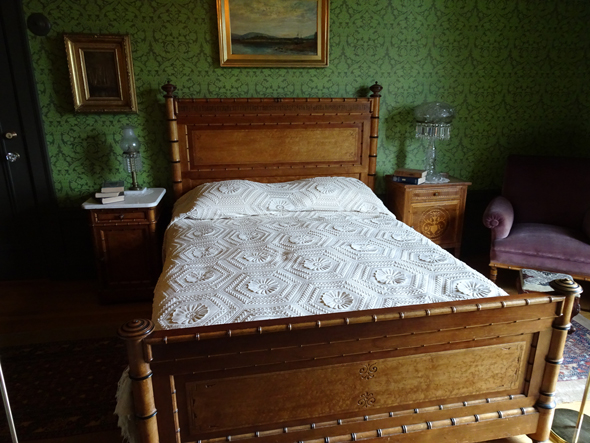 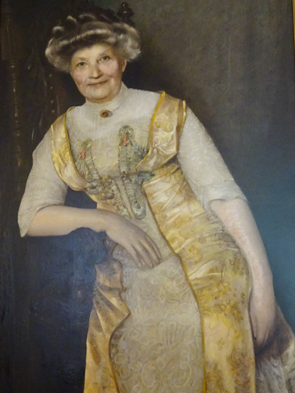 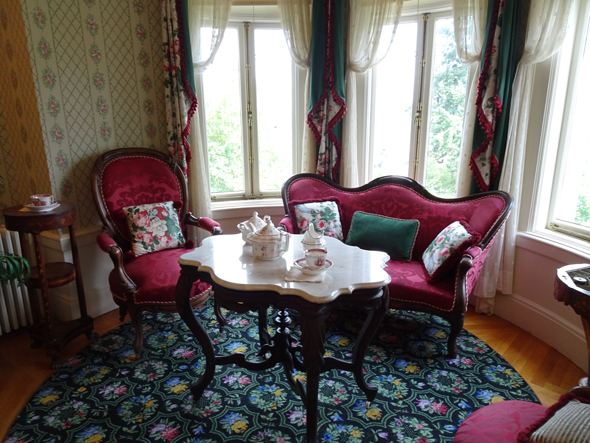 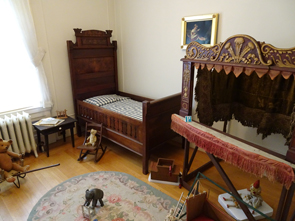 Bedroom and playroom for the grandchildren 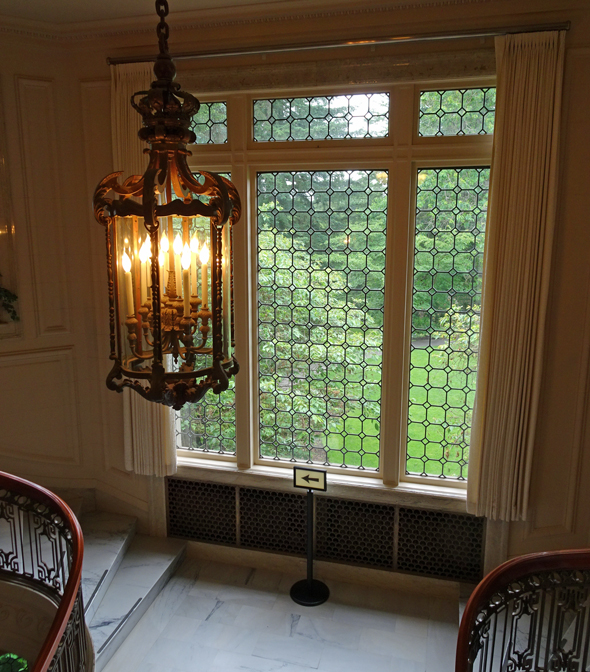 Beautiful detailing on the windows, railings and chandeliers

We spent nearly two hours in the house. Visitors can tour three floors - the attic floor (servants quarters) is off-limits. The basement, which was used as a game room (the original "man cave"?) has a display explaining printing presses and typesetting during Pittock's time as publisher of the local  newspaper. Fascinating stuff. We really enjoyed our tour.

Before leaving the estate, we had another walk around the house, through the carriage house (2400 square feet home for the chauffeur), took more photos of flowers, met a woman from Taiwan who was pretty surprised to meet an American woman with her English friend who had once been neighbors in Taiwan!

* * * * * *
Want a postcard from Pittock Mansion? I bought a small stack.
Send an email to postcards@RVGoddess.com and I will pop one in the mail to you.
Please include your postal mailing address! First come; first served.
* * * * * * 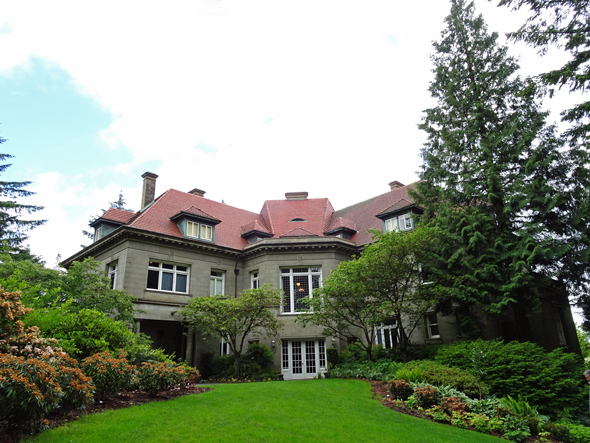 Then the skies opened and we hopped in Martin's car and went downtown to Jo Bar & Rotisserie for lunch. Our table was in front of a large window, so we had a view out to the sidewalk and street in front of the trendy restaurant. After we placed our orders, we couldn't help but notice a car trying again and again to parallel park directly in front of us. The poor driver went back and forth and back and forth and back and forth trying to get situated in the site. However, every time she did, she smashed into the cars in front and in back! It was "oops" the first time, but we counted her whacking the rear car SEVEN times! We were laughing so hard, people in the restaurant were looking at us. And we were not being rude by not helping her park - a man (her husband, we assume) was in the passenger seat, with his door open and head sticking out to assist. It reminded us of this:

We were laughing, but she was just a bit older than us. Thank goodness my new car has all sorts of beeps when I get close to something, or that could have been me. 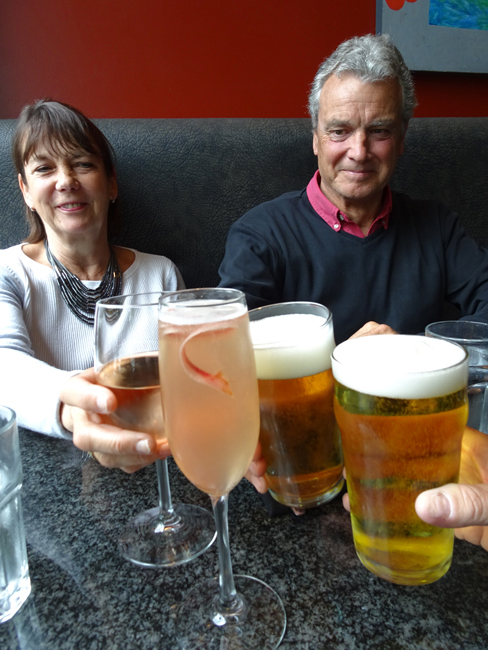 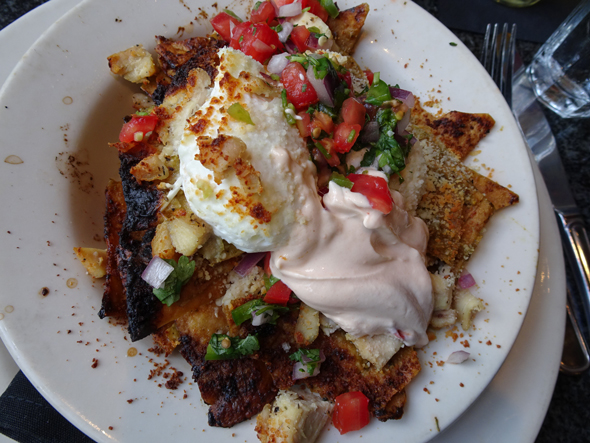 Dave had Chilaquiles with poached eggs

PS: The lady and gentleman returned to their car a bit later, hopped back in, rammed the car behind them one more time, and sped-away.

You would think this would be enough activity/fun for one day, but you would be wrong. We also attended an open house (for a Grand Re-Opening) at the salon where I have my nails done. I have been a client of Brandy since Lisa was in high school and recently her salon underwent a massive remodel. Instead of the usual small desks the technicians usually use, this salon has a long curved "bar" for manicures. 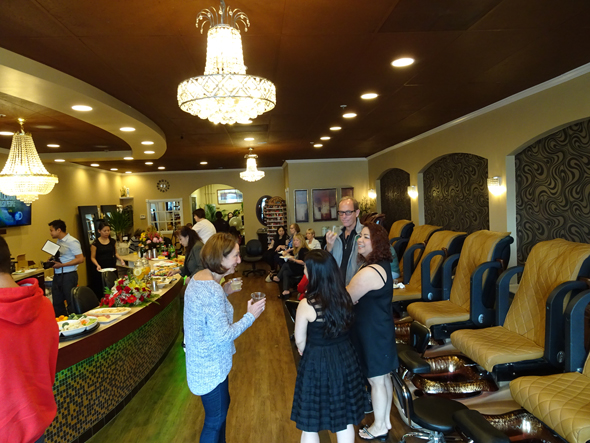 I have never seen a salon like this and Brandy's wonderful husband designed it all himself and did most of the work as well. For the open house, Brandy designed all the flowers and made most of the food. Serious Power Couple. 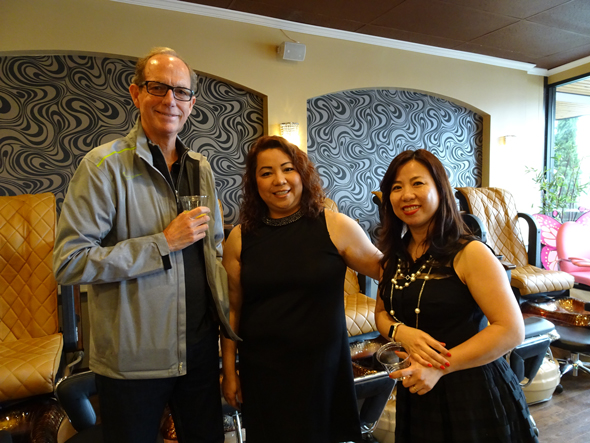 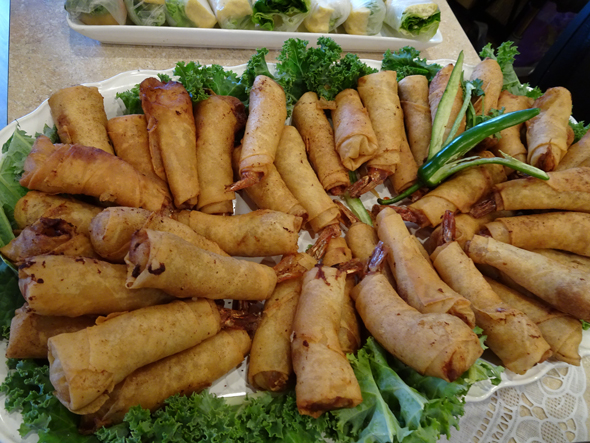 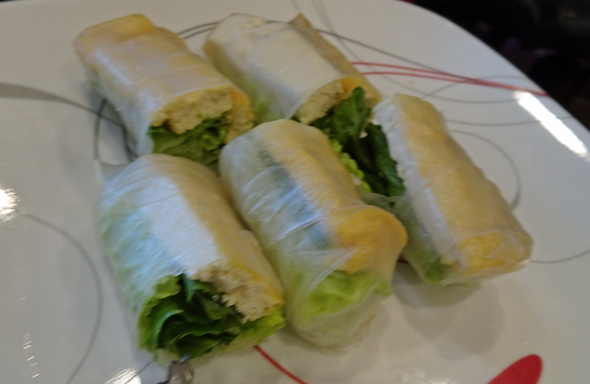 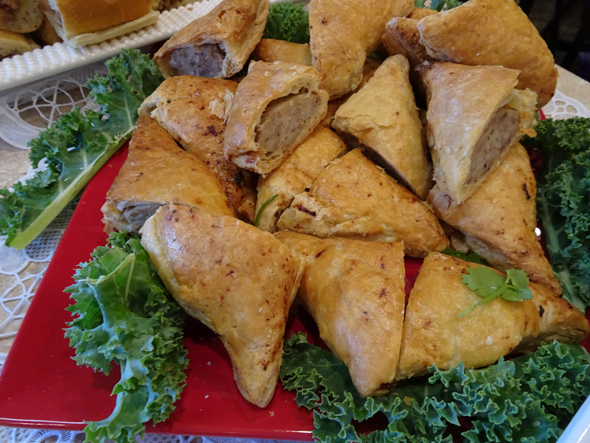 A Big Day for the old folks!

Until my next update, I remain, your cultural correspondent.