Glendale, Arizona:  I've had several hours to think about the days leading up to the game. I was so adrenaline-pumped, I did not fall asleep until around 3:30a. I should have gone for a midnight run.

I did go for a four-miler late this morning and I proudly wore my Oregon colors and had several shout-outs from passing motorists. Or maybe they were just honking at me because they wanted me to get through the crosswalk before the light changed???

It has been an amazing season leading up to playing in the National Championship game. A huge accomplishment for the University of Oregon. We have traveled to Tennessee (by plane) and took a road trip to the Cal game in our motorhome, following the Ducks to one victory after another. A great season. A proud program. I love My Ducks!

Auburn fans greatly outnumbered Duck fans in the stadium. Each school was allotted 17,000 tickets - so all those folks you read about paying thousands of dollars for a scalped ticket (mostly from Phoenix Cardinal season ticket holders) to the game must have been Auburn fans. I'm guessing they are not regretting the expense this morning. (Lisa & Lenny were offered $10,000 each for their tickets yesterday in the stadium parking lot. They declined. I'm guessing they are regretting their decision this morning.)

BTW: The Lovely Lisa and Lenny are safely back in Los Angeles and Lisa is suffering terribly from a head cold.

Speaking of Lenny... we have turned him into a huge Duck fan. Several times this weekend, I heard Lenny refer to the Ducks as "us". Lenny told a good story the other morning: he was walking to our RV from the nearby hotel and a group of people standing outside their RV asked him "how did you sleep?". Lenny assumed these RVers were our friends/acquaintances, so he sauntered over to them and started chatting. (Lenny has been introduced to so many of our friends over the past weekend, his head is spinning.) The friendly folks start asking Lenny all sorts of odd questions and he finally noticed one of the guys is wearing an Auburn shirt. Oops. These people are probably not part of the group camping here with the Taylor family, just friendly southerners... wondering how he slept?

Speaking of Auburn fans... other than reading a few rude signs, I heard not one snide comment or insult. The Auburn fans were indeed friendly, polite and very fun people - though I will never be a big fan of bright orange pants or ever understand even one of the "War Eagle" scenario explanations. One big difference in our fan base? Smoking. Prior to the Auburn Tiger pep rally, a cloud of cigarette smoke wafted over the crowd. During the Oregon pep rally, the air was clear. Auburn fans were standing outside every restaurant we passed-by in Scottsdale, smoking in large groups. On thing common in our fan base? Nearly every person at both pep rallies was Caucasian. It was freaky. Like a white people convention in Scottsdale. How does this happen? 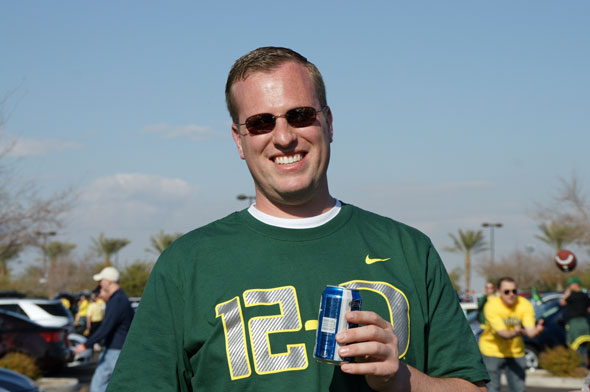 This is Brandon. Brandon is our house sitter. He has been our house sitter for a very long time. We think he spends more days a year in our house than we do. Since Brandon was flying down to Phoenix for the game (apparently his employment contract includes paid time-off during all Duck Bowl games?), we had him bring down our mail and a few other things. One being my hormone prescription. My hormones are a hippy compounded cream, packaged in large plastic syringes so the cream can easily be measured-out and applied to the skin. We also forgot our passports (we may go to Mexico) and as long as he was bringing the passports, we asked Brandon to bring our stash of Mexican pesos.

Which meant when Brandon passed through security at the Portland International Airport, he could have easily been mistaken for a gringo heading to Mexico for a cheap sex-change operation.

The Homeland Security officer held up the syringes and gave Brandon a questioning look. Brandon told him the hormones were for his Aunt. The security officer gave him a "sure, buddy, sure, that's what they all say" look and sent Brandon on his way to become Brandy Phoenix.

Speaking of security checks... I forgot to tell you... Charles Barkley (who went to Auburn) was in front of us in the security line at the stadium yesterday. He is a very tall and a very large man. Remind me sometime to tell you about the time The Lovely Lisa stepped on his foot in Barcelona.

NIKE honored the University of Oregon football team this morning with this full-page ad in several newspapers: 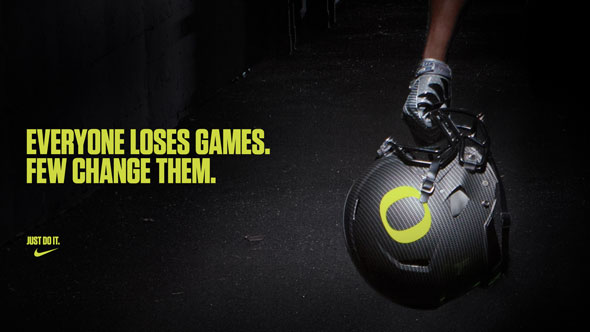 Is that a cool helmet sentiment, or what? You can download this inspirational piece of advertising free from Nike. I'd sure like to see the ad they were going to print if the Ducks won.

NIKE has also placed this billboard around the Phoenix area:

2011 college football polls are out. The Ducks are already ranked anywhere from 1 to 3. Guess you all are going to have to suffer through yet another year of football blogging. I apologize in advance, and promise to throw-in many bonus track meet columns for your enjoyment.

Try to contain your excitement.

In other sporting news, the game last night was the all-time number-one broadcast event on ESPN. Everyone loves Cam Newton the Ducks.

In non-sporting news, our eldest G-d Daughter, Natalie, was accepted to the University of Oregon today! Bittersweet. Perfect. Hopeful. So proud of you, Natalie!

Tonight, Red took DT and I for a farewell dinner at Rancho Pinot in Scottsdale. Delicious, seasonal and locally-sourced (so you know I was going to love the food), Owner/chef Chrysa Robertson grows the herbs - and raises chickens that produce all the eggs - for her restaurant. Highly recommended by the RV Goddess & DT (& Red).

THIS JUST IN: The BCS Championship trophy will be on display, beginning January 13th, at several area The Wal-Marts throughout Alabama.

I can't make this stuff up, people!