Glendale, Arizona: The Oregon Ducks went undefeated all year, only to lose the National Championship against the Auburn Tigers. It was a very exciting, but very long, day. I am just going to post a bunch of photos tonight and write a recap column tomorrow. 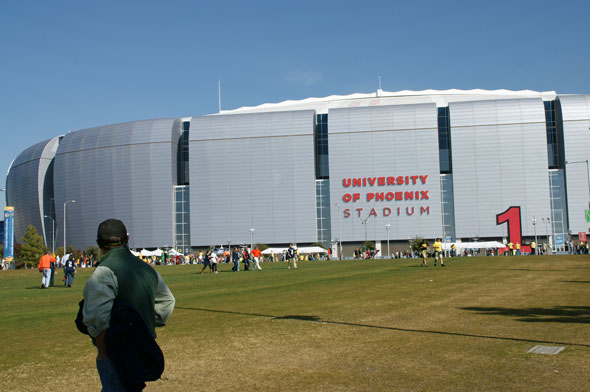 We arrived at the University of Phoenix Stadium in Glendale, Arizona around one o'clock. Kick-off was set for 6:30p. This gave us plenty of time to have lunch with our friends and check-out the stadium. 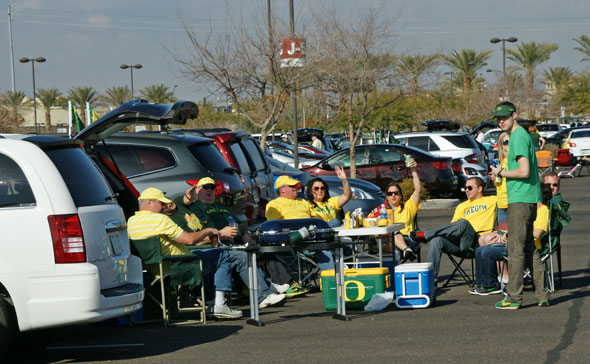 Looky who we found in the parking lot! 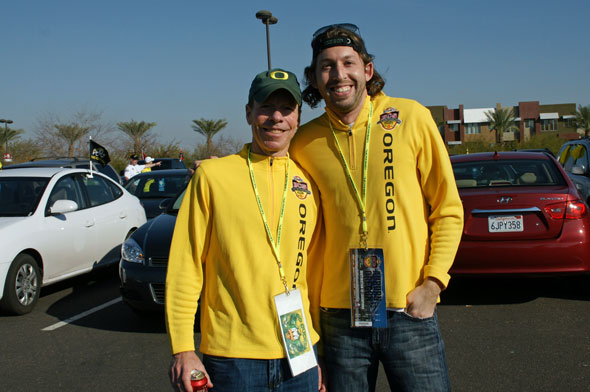 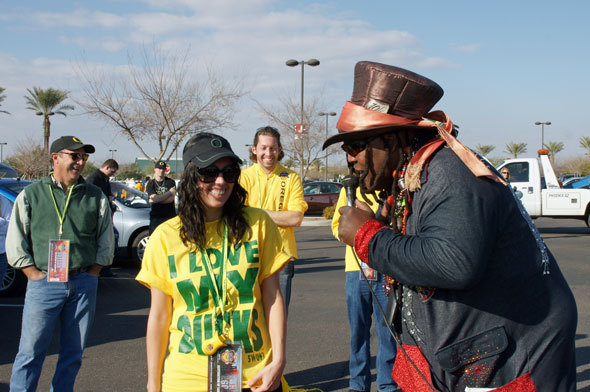 We were serenaded by a wandering street performer/rhyming rapper. He was hilarious. By same strange coincidence, we saw this same street performer in Los Angeles last year - the night Lisa introduced us to Lenny.

This video is courtesy of Steve - Thanks, Steve!

I have an unseen part, starring as "Susan", DT is "Oglethorp" and The Lovely Lisa has a leading role, appearing as herself. The crowd laughs a bit when the rapper said Lisa wanted to go to school in Eugene... though Our Girl was accepted to the University of Oregon, she holds a degree from The George Washington University. And really, that just doesn't rhyme with anything. 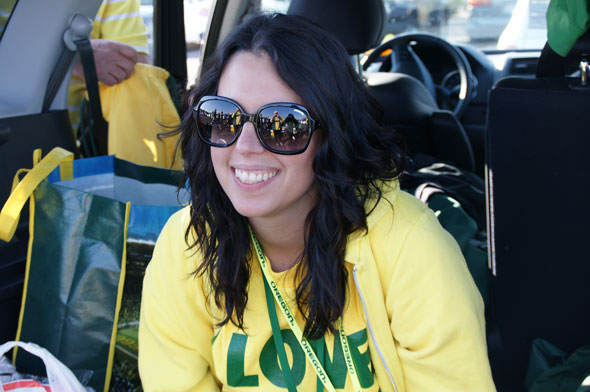 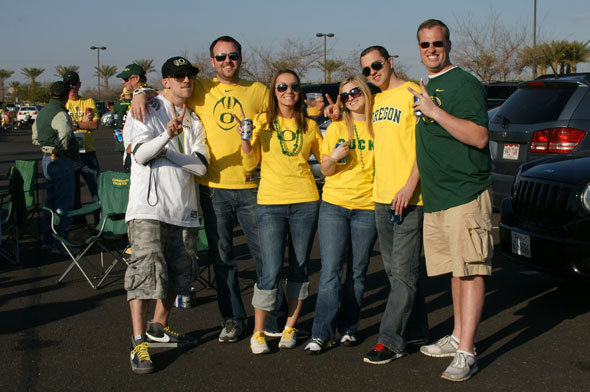 Our usual Autzen Tailgate Crew are in Arizona for the game - Alex, Jake, Jaime, Laura, Chris and Brandon. 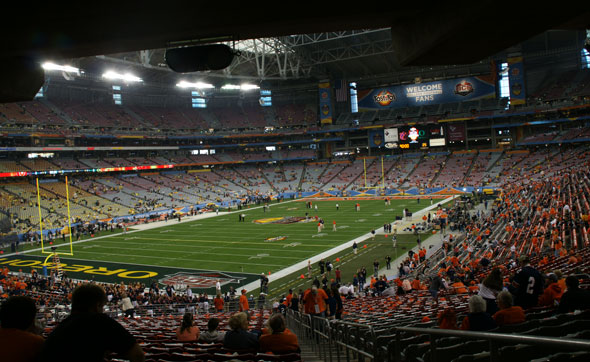 The doors open about 4 hours prior to kickoff. This was our first view of the field. Over 78,000 college football fans filled the stadium tonight - the most ever in this stadium. A record. 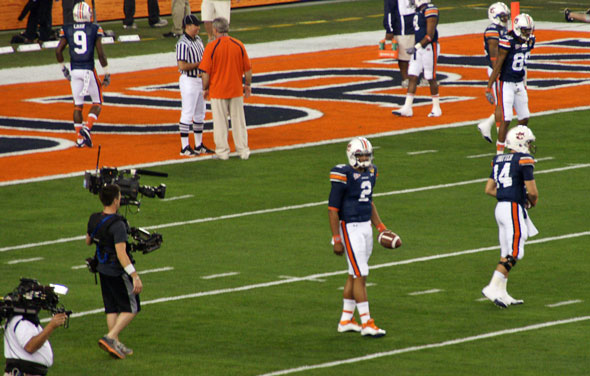 And here he is - a bit blurry - Cam Newton, the Heisman-trophy-winning quarterback from Auburn University. Everywhere he went during his warm-up, a camera was in his face. 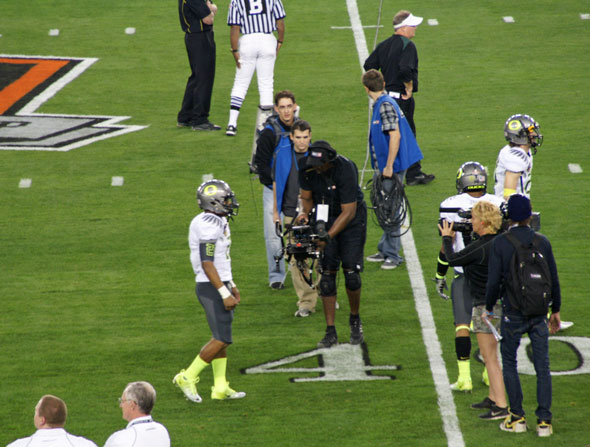 Here he is, the non-Heisman-trophy-winning running back from The University of Oregon. Everywhere he went during his warm-up, a camera was in his face. Can I mention here, for the 63rd time, that I love this kid and that he is also on the track team? Anchors the 4x100m relay team. Whataya think about those snazzy socks? I loved the Duck uniforms tonight, but our colors are green and yellow. How does this "carbon" grey come in to the color scenario? The Ducks never wear the same uniform combination twice in a season. By the way, the man in the white visor at the top of the photo of our coach, Chip Kelly.

Is it a good sign when your team is playing in the Tostitos Bowl that your coach is named Chip? (Or so Coach Kelly asked the crowd at the pep rally last night.) 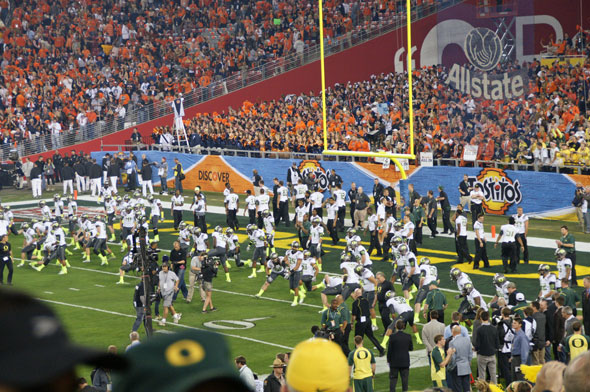 The Ducks storm the field for one last warm-up before kick-off. 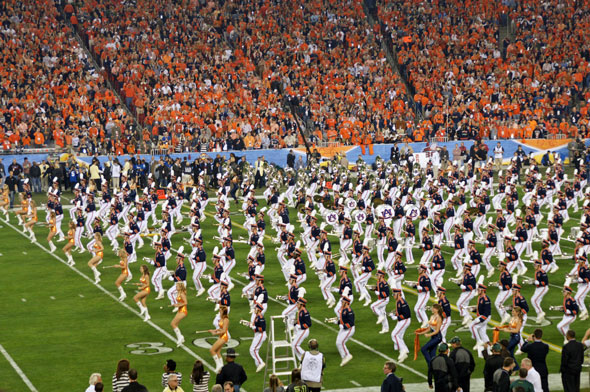 The Auburn University band led us in America the Beautiful before the game. A group of local military families were honored for their sacrifice on the field before the game and then a banner was raised and their husbands/fathers magically appeared from Iraq as a surprise to their families. So emotional! A moment of silence was observed for the Arizona Congresswoman attacked at her town hall meeting in Tucson the other day. So emotional! Honorary Captain for Auburn was Bo Jackson, while Ahmad Rashad led the coin toss for the Ducks. Ducks won the toss. 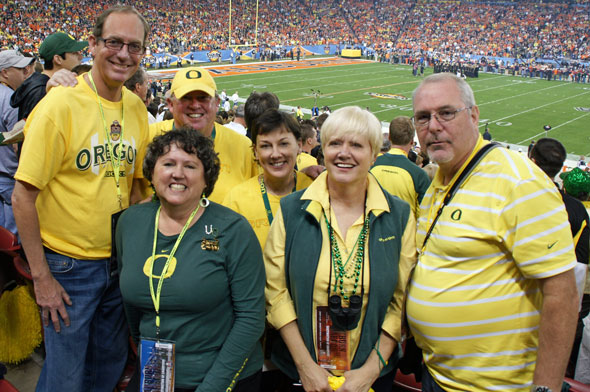 DT, Terry, Steve, Mary, Kathy & Woody - how many times do we go to a bowl game when the Ducks win? Not very often, that is for sure. I just know we keep going and I know we will keep going as long as the Ducks keep getting into bowl games. I won't go into the details of the game here. I am not a sportswriter and if you are a college football fan, you probably watched the game. 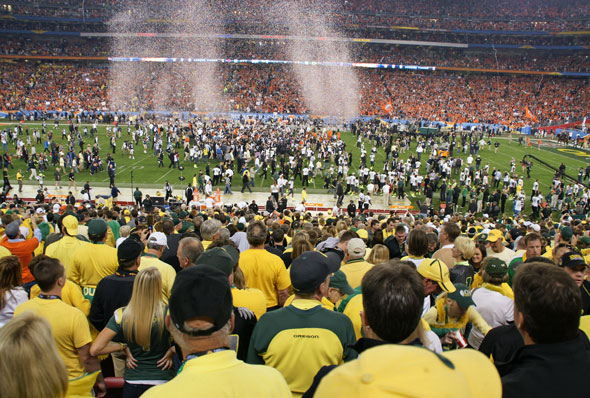 The Ducks lost. Last minute field goal. The victory confetti shot out of those cannons was orange and blue, not green and yellow. Once again, the Fighting Ducks could not pull off a bowl victory.

I thought it was a very exciting game, though apparently My Driver does not agree. When the Ducks scored a touchdown in the last few moments of the game and made a two-point conversion to tie, I thought the Duck-side of the stadium was going to collapse from 25,000 people jumping up and down! When the Tigers kicked a field goal in the last seconds of the game to win, I thought I was going to cry.

But just a little.

I am a Duck Fan. We have a great program. We competed in the National Championship game! Duck fans have two cheers. The first is "Go Ducks" and the second is "Next Year".

Until my next update, I remain, your I LOVE MY DUCKS correspondent.
« Oregon Pep Rally Tales, Tidbits, & Assorted News »