Los Angeles, California: During the past four days, I have been helping a very pregnant Lisa as much as possible. Most of my duties involve completing chores while Leo and Lisa nap in the afternoon. I've done a few errands, (and have actually cooked very little), while trying to spend as much time with Leo as possible.

One little chore has given Lisa and I quite a bit of a headache - involving a trip to the craft store and the hardware store: making 18 bumblebee head bands for a classroom at Leo's school. (Not even Leo's class, by the way.) The school provided Lisa with the headbands, black and yellow pipe cleaners and little foam balls to attach to the tip of the pipe cleaners. We even had a little instructional print out. 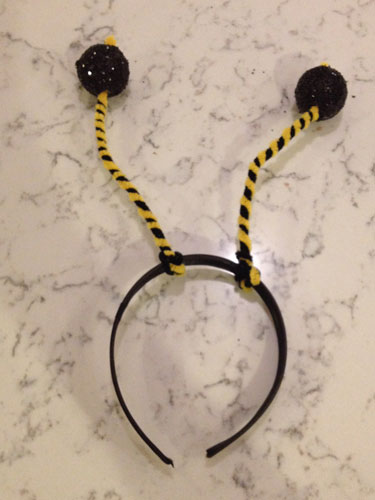 Wrapping the yellow pipe cleaners around the black pipe cleaners was no problem. Attaching the "antennae" to the headbands was super simple. The problem was getting the white Styrofoam balls black. We first tried spray paint. That was a disaster - and my disaster alone, as apparently it isn't a good idea for pregnant ladies to sniff spray paint (but it is some-how fine for old ladies?). The paint disappeared into the crevices of the Styrofoam. I waited an hour and went out to spray a second coat. Not much improvement. When I went out to spray the third coat, I noticed the paint chemicals had somehow eaten-away at the Styrofoam, causing the spheres to be misshapen. They now resembled shrunken-up Prairie Oysters (that had been spray-painted black).

Trust me, these shrunken shiny black balls were not something you wanted bobbing up and down over the head of an adorable three year old at the school play.

PLAN B: By the next day, the black globs were actually beginning to resemble obsidian and the chemical smell could not be hidden. They went into the toxic waste dump and I headed out to the craft store where I purchased more white Styrofoam balls, glue and black glitter. We reamed the white balls through the center with bamboo skewers, dipped each ball in glue, then dipped the sticky balls in black glitter.

It worked! They looked fantastic. Whew. We waited for the antennae to dry and then discovered the added weight of the glue and glitter made the antennae DROOP to each side, instead of being perky. Clearly, we were the wrong people for this easy task.

Finally Lisa discovered if we simply wrapped the black and yellow sticks around the headband one additional time, the bumblebees would look presentable.

We could finally go to bed!

I do not have a photo to post of Leo tonight, because the photos I snapped of Leo today involved him wearing the cowboy boots we sent him a few weeks ago from Wyoming - and nothing else.

There is a photo I want to share - Lady Katharine and Simon brought Lisa and Lenny the most gorgeous flowers Tuesday night: 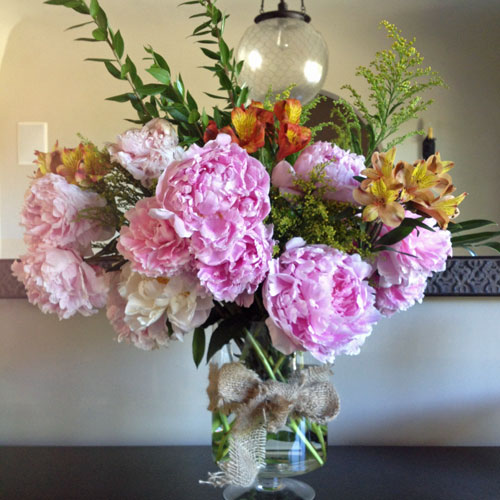 Until my next update, I remain, your glittery correspondent.
« Back in Los Angeles Where Am I? »