Beverly Hills, California: You may (or may not) recall Dave and I attended a charity auction last summer in Portland, and “won” a gift certificate for two nights in a fancy hotel in Beverly Hills. Since his birthday falls this week, it was the perfect chance to use the certificate before it expired.

But we are not the only people in the family making use of an auction prize today. Leo is “Principal for the Day” at his elementary school – an item Lisa and Lenny bid on at Leo’s school auction a few months ago. 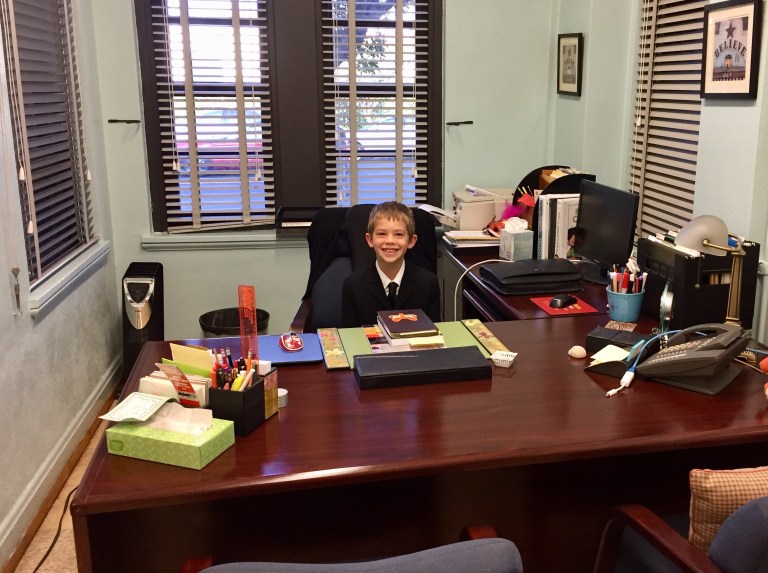 We spoke to Leo after school. He said he started the day right by bringing coffee and pastries for the teachers and staff. Smart kid. He made an announcements over the school intercom, and spoke with a staff member via a walkie-talkie. Best part? The actual principal took Leo to lunch (i.e. walked to a sub shop). Just the two of them – how lovely.

Dave and I asked Leo if he had to suspend anyone or spank anyone. He was so confused. Imagine his surprise when we told him that back in our day, the school principal could give your behind a paddling if you were naughty. (Never happened to me, but there is one incident his grandfather can tell.)

Just after checking into our fancy Beverly Hills hotel (details later), there was a knock on the door and the cutest miniature birthday cake was delivered to My Driver. How sweet. Pun intended. 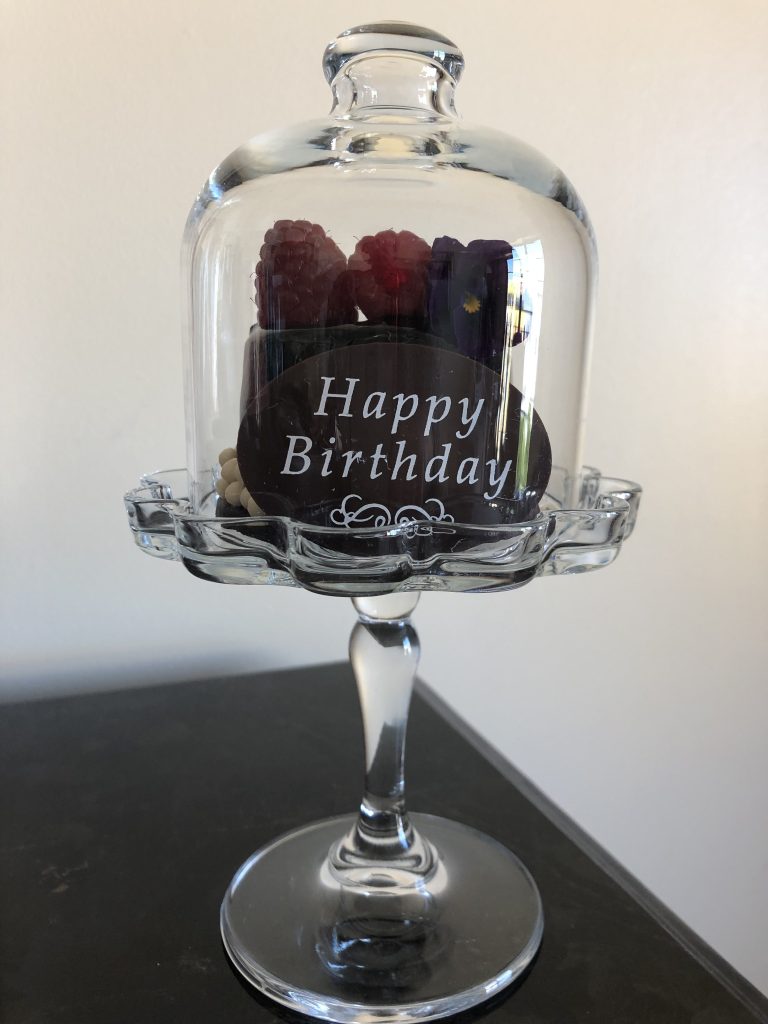 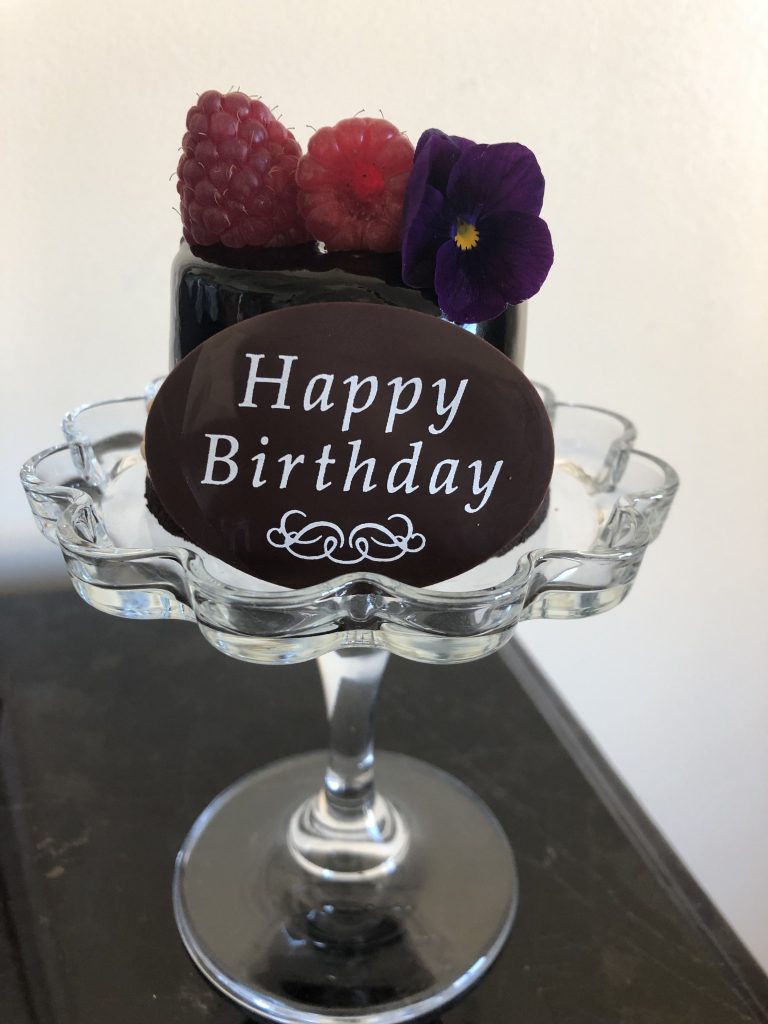 We dressed for dinner, then had a stroll around the hotel grounds to get familiar with the property, then continued strolling into the hotel bar for a pre-dinner cocktail.

The hotel provides a fleet of luxury cars with drivers to whisk hotel guests to nearby destinations, and we soon found ourselves seated in a Maybach (seriously, I’d never heard of this Mercedes-Benz sub-brand), on our way to our reservations at The Bazaar, a Jose Andres tapas restaurant.

I had reserved seats at the bar in front of the open kitchen so we could watch some of the dishes being prepared. Our server suggested we order 4-5 dishes – per person – to share. First, more cocktails: 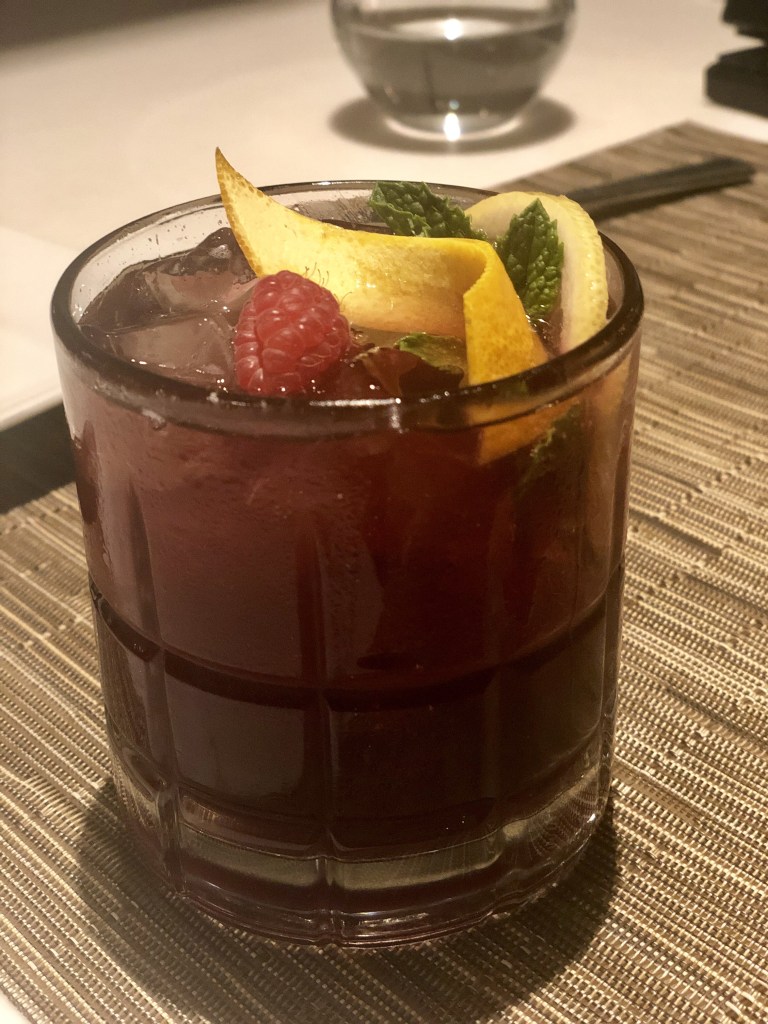 Dave had a red sangria. 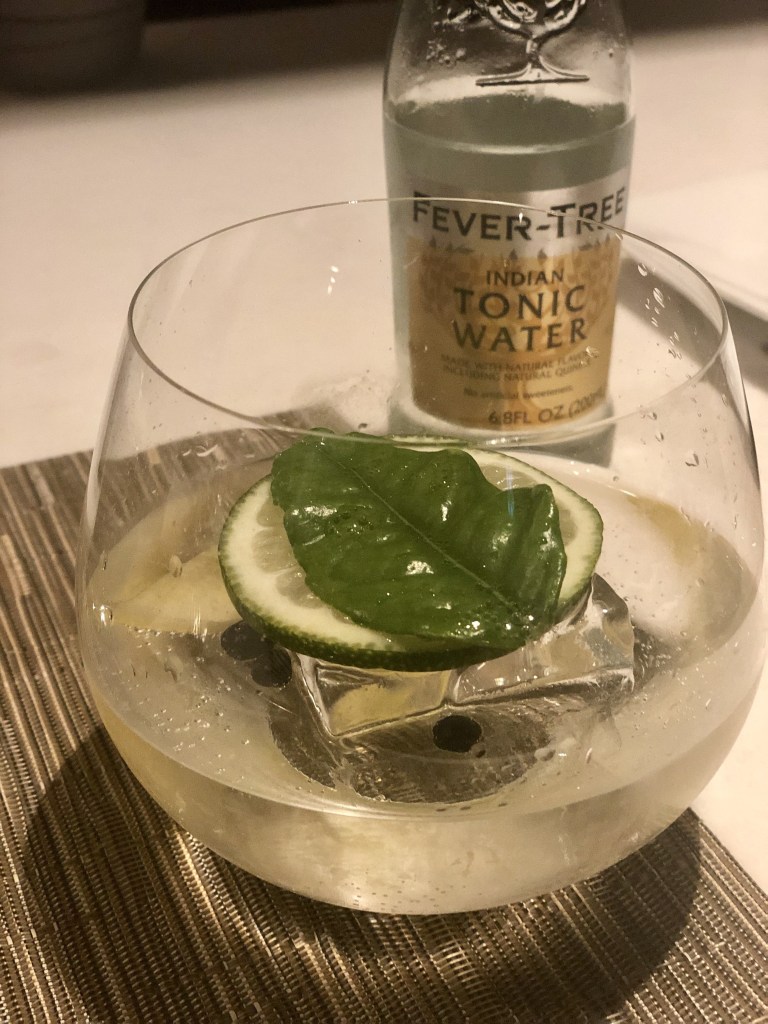 We knew we could never eat ten plates of appetizers, so started ordering a few at a time to see how we would proceed. We ended-up eating (most of) five glorious plates: 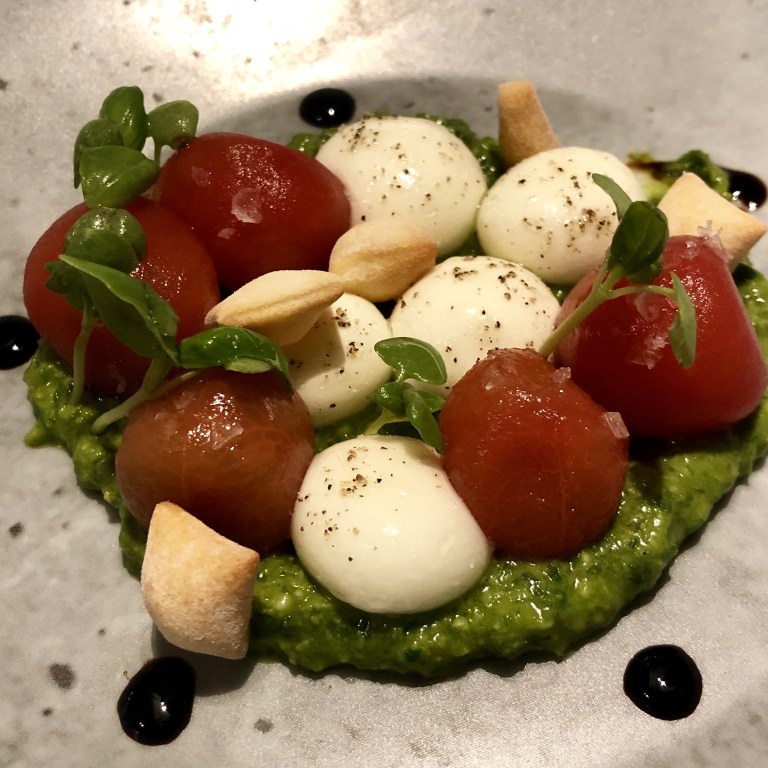 “Not Your Everyday Caprese” – with liquid mozzarella… with peeled cherry tomatoes. 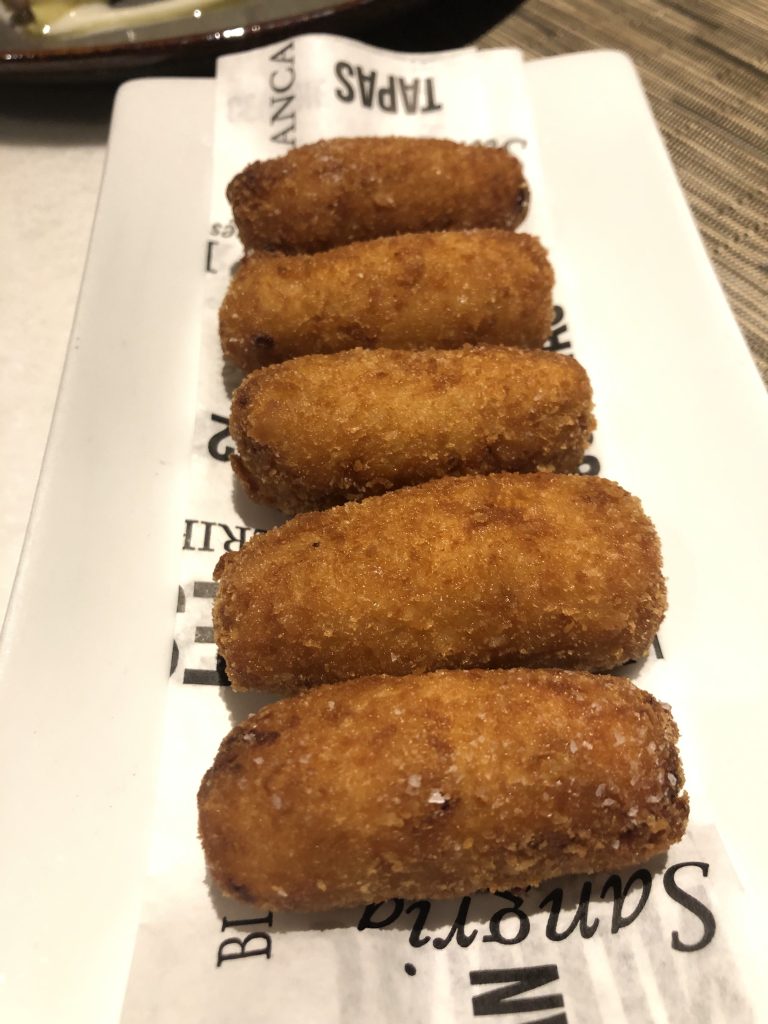 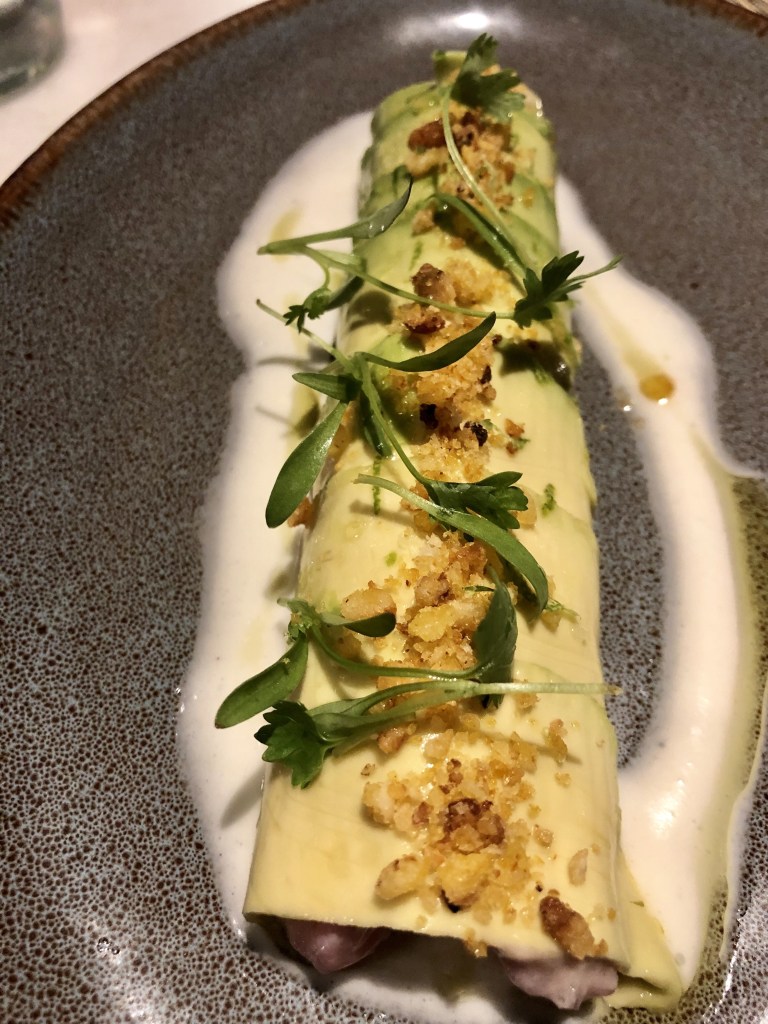 Tuna Ceviche and Avocado Roll with some-sort of coconut whip. The tuna was rolled in paper-thin slices of avocado. Who can slice avocado like this? Maybe the same person peeling the cherry tomatoes? 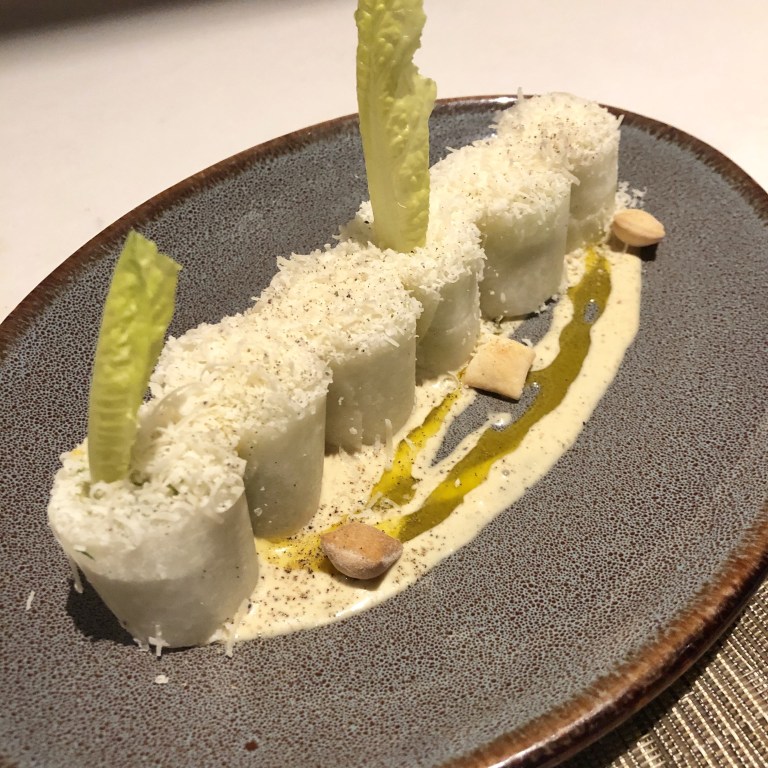 Speaking of thinly slicing stuff… the “Organized Caesar Salad” was the usual Caesar Salad ingredients, rolled up in paper-thin slices of jicama. No chopsticks were offered at the Spanish tapas bar serving sushi-type dishes. We ordered one more dish that I did not photograph, and it was my favorite: roasted baby potatoes served on a small platter over red sauce (on the left side of the plate), and green sauce (on the right). The potatoes were crispy on the outside, creamy on the inside and embellished with a crunch of sea salt.

NOTE: I chose The Bazaar because we are both huge fans of Jose Andres. He opened Jaleo while Lisa was at college in DC, and we would often visit this tapas bar – and enjoy pitchers of his famous sangria. His genius has allowed Andres to open many more restaurants around the world. But it isn’t his restaurant empire that impresses me. It is his charity. When there is a disaster, he somehow manages to get massive portable kitchens into devastated areas and begins feeding victims, rescue workers and any passing stranger. Using his own resources and donations from his World Central Kitchen charity, millions of meals have been served. No charge. Jose Andres has been nominated for a Nobel Peace Prize.

We Ubered back to our hotel and called it a night. Day One of the Birthday Trip was a success.

ANOTHER NOTE: My website is still in the process of being moved over to the new host. Thank you for your patience. This new site will allow me to publish a post from my laptop, iPad or phone, so I am taking this mini-vacay to test myself. My laptop did not make the trip. Nor a camera. This report comes courtesy of my iPad and a miniature (hard to use with long fingernails) folding keyboard. All photos were snapped with my phone. It’s a process progressing into the modern world, but I am up to the challenge. Please let me know what you think in the comment area below.

Until my next update, I remain, your Beverly Hills correspondent.