Indio, California:  I'm afraid daily readers will get deja vu all over again from this column. The weather has simply been awful, unless you are a thirsty cactus in the Coachella Valley. Last night was miserable - wind and rain! It rained so hard we lost satellite internet - and that has only happened a handful of times over the last 8 years. The rain fall measured 1/3 of an inch overnight. Rain falling on the roof of a RV can be a soothing sound at times. Last night it was deafening.

There was a lot of tossing and turning last night. Not a lot of sleeping. If my Sweet Sister hadn't accidentally butt-dialed me at 7:20a, I may still be asleep.

Time to get up. 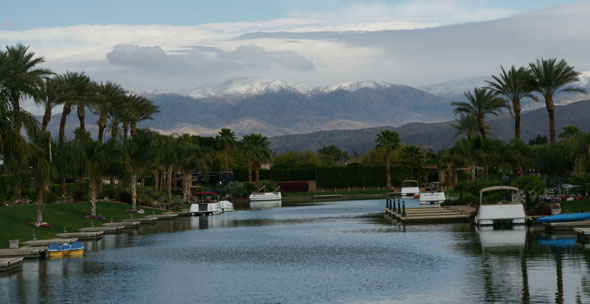 What is that white stuff on the mountains in Joshua Tree National Park?

What a difference a day makes!

It was only 54 degrees this morning and quite breezy. This would have been a good day to hit the resort fitness center treadmills... but that is one reason why we are not in Oregon in February - so we don't have to run on a treadmill. I put on three layers and hit the road. DT was running along the same route and lapped me several times. I told him my legs felt like they weighed 100 pounds each.

He said they did.

I have no idea why I even speak to him.

Oh, I remember now - he takes me for tacos several days a week. 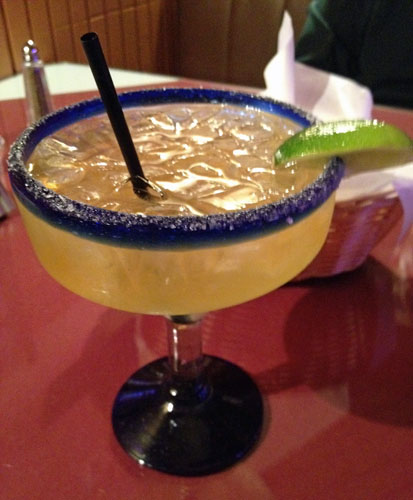 We tried a new place in Indio today for lunch - the very popular Pueblo Viejo Grill. The restaurant was packed, even though we were late lunchers. Basic Mexican menu. I was a bit disappointed that their tacos were hard shelled and include cheese (I call these American tacos), as I much prefer the soft-shell, chicken, cabbage, onion and cilantro (so healthy) version common in this area. 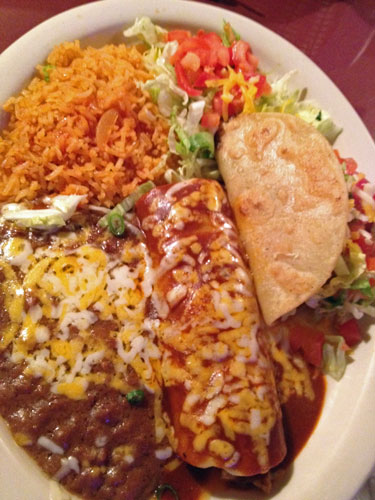 Rice, beans, chicken enchilada, chicken taco. I managed to eat only the enchilada and most of the taco. Too much food. I was thinking of ordering two chicken tacos ala cart, but they were $4.50 EACH. What??? There are five zillion places to get a taco for $1.50 or less around here. Strange. 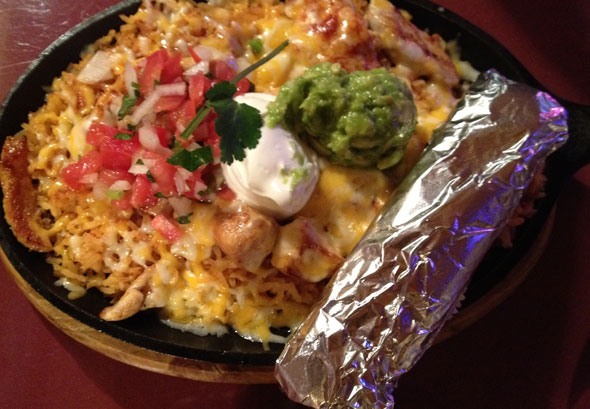 My Driver ordered Arroz con Pollo (Rice with Chicken). It came with tortillas (wrapped in foil) and for some strange reason, this dish was also topped with cheese. Non-traditional.

We have learned that if we go to a Mexican restaurant for lunch, we cannot eat dinner. But if we do to a taco shop and have two tacos (no rice, no beans, no booze), that is more like a snack. Much healthier, as well... and there is room for dinner. 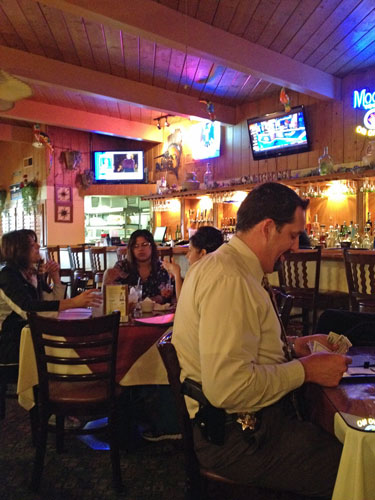 But we didn't need to worry about our safety in Pueblo Viejo today. The sheriff was in the house - and he was packin'! 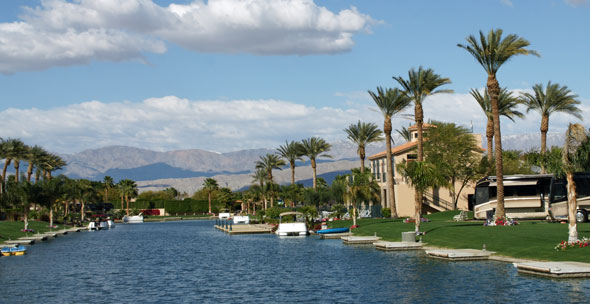 We arrived home after our "lunner" around 3p - the snow had already melted!

SLOGGER REPORT:  Though I ran with legs that weigh 100 pounds EACH, I still managed to get around a bit on this chilly morning. I did the short half-mile loop, walking the corners and runner "fast" on the straight-aways. 4 miles.

Until my next update, I remain, your taco-loving correspondent.