Track Town, USA: I had hoped to have this dateline read Portland, but this gal remained in Eugene to witness the 100m run-off that wasn't and didn't. Tarmoh said no. I am suspicious and do not think this scenario is over.

DT spent the entire day helping to organize the dismantling of the best track meet America had ever seen and I stayed in the RV, working and cleaning our dusty mess. For ten days our poor RV has been used as nothing but a bed, a shower and a laundry facility. Disaster. Not sure it has ever been this untidy and unkempt and I never want to see our motorhome looking like a frat house basement again.

Catching up with a few things... remember the other day when we had lunch with Dave's high school coach, Cliff Clark? Cliff ran in the 5000m at the 1972 Olympic Trails (also held in Eugene). 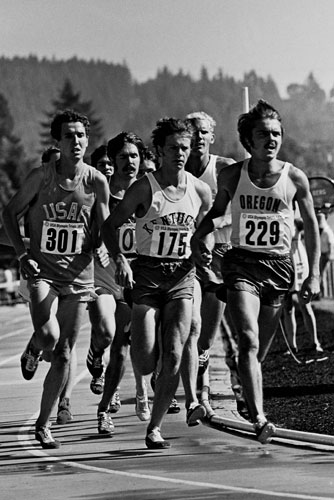 Cliff, in bib #301, is racing with Steve Prefontaine (#229). Cliff did not make the team, but Steve Prefontaine set the American record in this race (13:22). The US sent Pre, George Young and Leonard Hilton to the Munich Olympics. Young and Hilton didn't make it out of the heats and Prefontaine finished 4th in the final. Here is a video of the final mile of that famous race:

Fourth. Or as it is referred to in the track and field world, #$&%*@! fourth. No one remembers who came in fourth. No medal for fourth. No Olympic Glory. Fourth is misery.

While Lisa and Lenny were at our home in Portland over the past weekend (visiting with family and friends), they sent a few cute photos our way so that we could feel completely miserable and torn that we were in Eugene instead of with the Cutest Baby Ever in Portland: 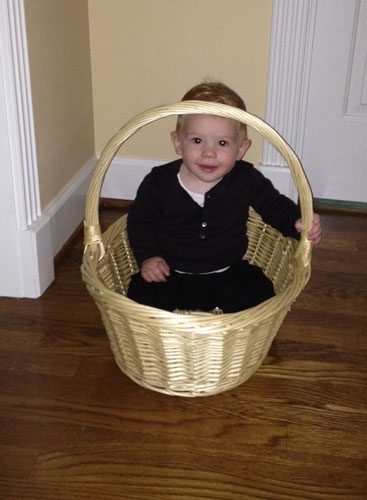 We keep this basket by the back door and use it to hold things that need to go the RV. Little Dood climbed right into the basket - obviously he wanted to go back to Eugene!

His plot didn't work, so Baby Leo spent his time alphabetizing our DVD's. 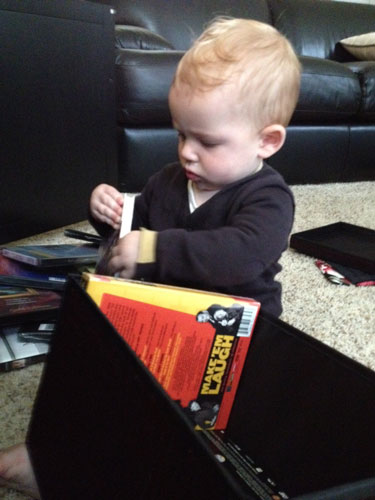 That boy is SO helpful!

In other news... I had a lot of fun with the track & field questions contest all last week, but remind me to never again hold a contest during the Olympic Trials - too many late nights. In my groggy state, I hope the correct prizes were shipped to the winners. 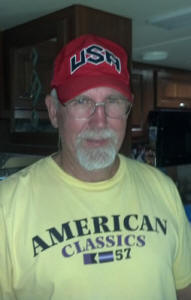 David H., Ishpeming, Michigan won Question #2 (who holds the current world record in the men's 1000m: Bekele of Ethiopia) to receive a very cool USA Track & Field cap. David sent this photo of his handsome self - with a note he will be wearing his prize while watching the Olympics this summer. Thank you, David!

Camping Journal RV Log Books were sent to Mary in Waterville, Ohio and Susie in Vernon Hills, Illinois for knowing a women's hammer weighs 8.82 pounds. Long-time reader David (Edmond, OK) won Olympic Trials lapel pins because he googled to find that Betty Robinson was the first American woman to hold the 100m world record. More Heritage Athlete Olympic Trials lapel pins were sent to Margaret in Denver for knowing the weight of the men's shot put and fellow Oregonian Margi (Sutherlin) won a US Trials baseball cap because she guessed Nick Symmonds liked to fly fish. Nancy, in Kennedale, Texas knew Bill Dellinger was 3rd in the 5000m in the Tokyo Olympics and won a very cool NIKE backpack. I sent a blue NIKE EUGENE cap to Kevin in Indiana for answering the question about the women's steeplechase (the first time women raced the steeple was the last Olympics in China) and our last prize winner was Elrita in Houston. She knew about Dick Fosbury and his flop. Doesn't everyone?

Thank you to everyone who entered and I promise to have more contests soon with more fun prizes.

Until my next update, I remain, your thirsty correspondent.