Track Town, USA:  Though it seems to me these Olympic Track & Field Trials have been happening for over a month, it has, in fact, been only eight days. My brain is barely functioning from so little sleep and I am only a fan. I can't even imagine how tired the athletes (and DT) must feel.

Since the fan festival did not open until noon, I met my sister and niece and we had a lovely brunch downtown Eugene before heading over to the track. Renee and Carla spent quite a bit of time exploring the fan festival.

There was also big excitement for our family - Baby Leo and DT made the daily program! 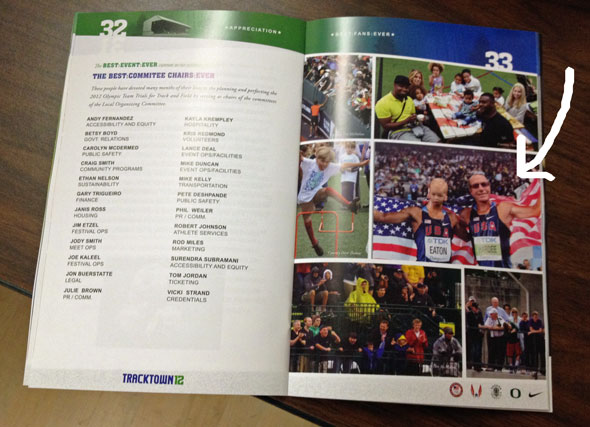 If you recall, I put this photo on my blog the other day - it is Leo and Dave with their heads in cutouts of Ashton Eaton and Trey Hardee in the children's play area inside the fan festival. Long story short, I was asked to provide a large-size file of the photo for the program on the "fan photo" page, and I did. 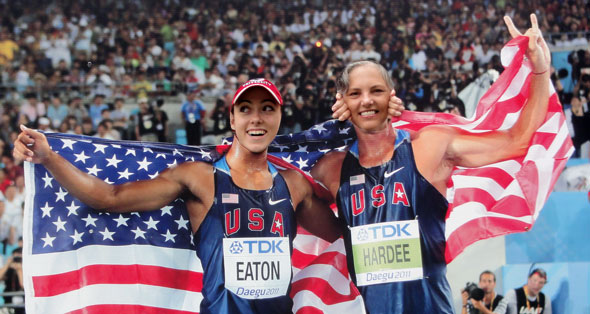 Then, of course, Carla and Renee had to jump on that bandwagon! 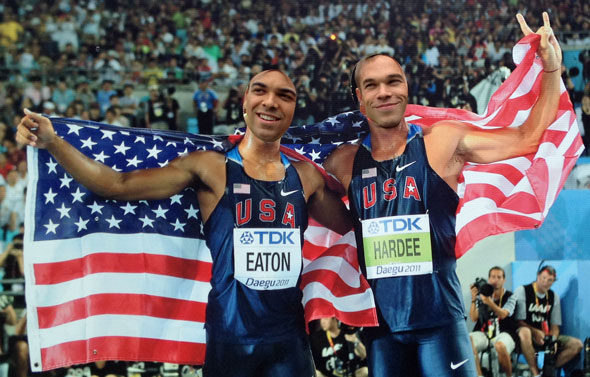 As did Jordan Kent and Nick Symmonds! Kent was in the kid zone filming something for his nightly local television recap show about the trials. 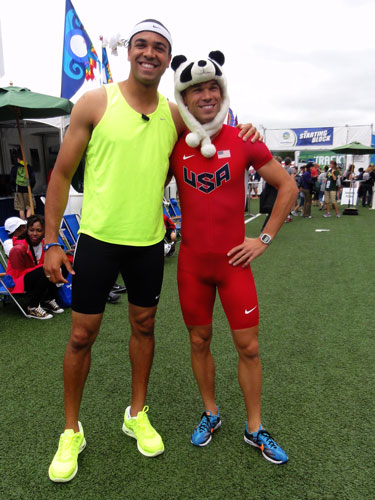 And since I have never been able to watch the show - or any television coverage of the meet at all - I am afraid I can only imagine what these costumes were about... and you probably do not want to know where my frazzled mind was wandering. 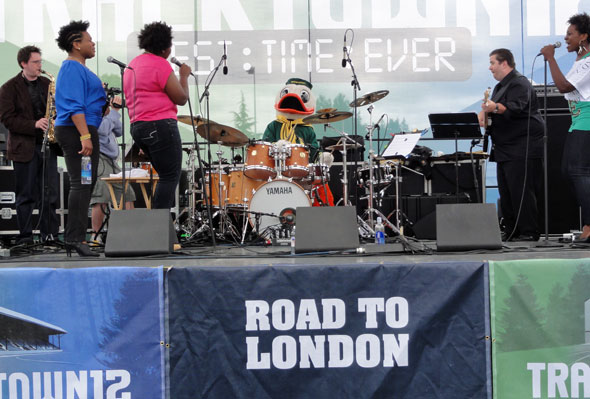 I am so zonked... I hallucinated that The Duck was drumming with one of the bands on stage at the fan festival.

At three o'clock we all took our seats in the stadium to watch the last day of competition. Just a few events - all of them a final. All or nothing. Incredibly, one of the best 400m hurdlers in the world, Bershawn Jackson, failed to make the US team. The most anticipated race (from a local perspective) was the men's 1500m. Many Oregon athletes were in the race, and the field was so incredibly stacked, any of the 12 men could have made the team. Leo Manzano and ex-Ducks Matthew Centrowitz and Andrew Wheating came in 1, 2, 3 and are going to London. 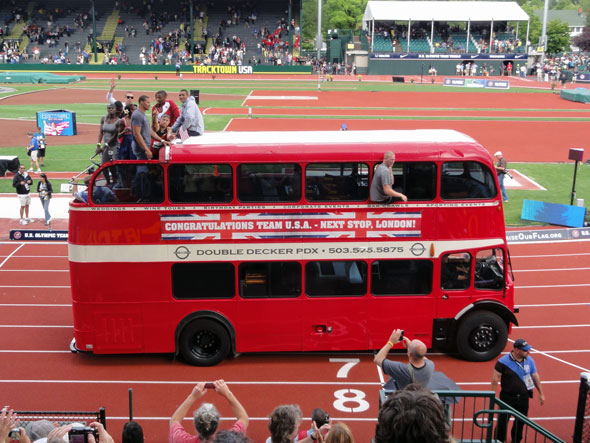 The US team trials do not have all the hoopla of the Olympic Games, yet DT arranged for this little send off to London for the athletes as the "closing ceremony". 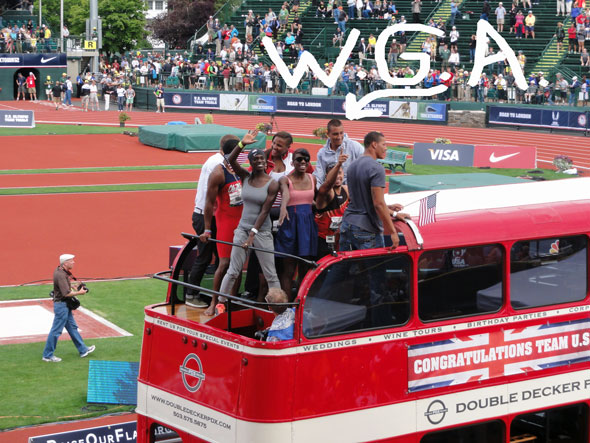 Even WGA Ashton Eaton returned to town in time to celebrate with his fellow teammates!

Back in the fan festival area - it was crazy! The weather was finally spectacular and thousands of fans stayed to enjoy the food, music and beer gardens. A big sigh of relief was heard from the organizing committee and they finally were able to relax and celebrate a job well done.

I sent a text message to Matthew Centrowitz and he came to say hello to his adoring fans in the hospitality tent. 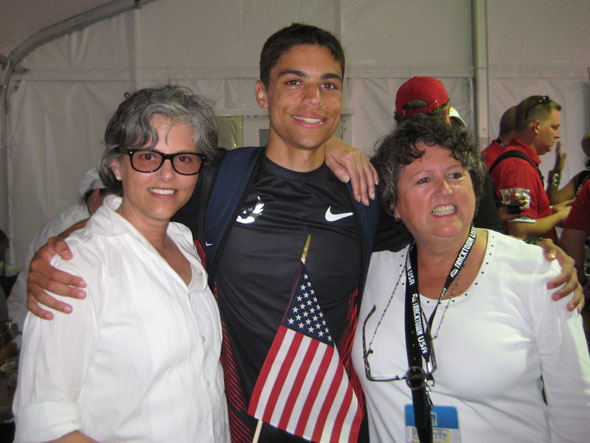 Matthew posed with Renee and me - and many others at the celebration... 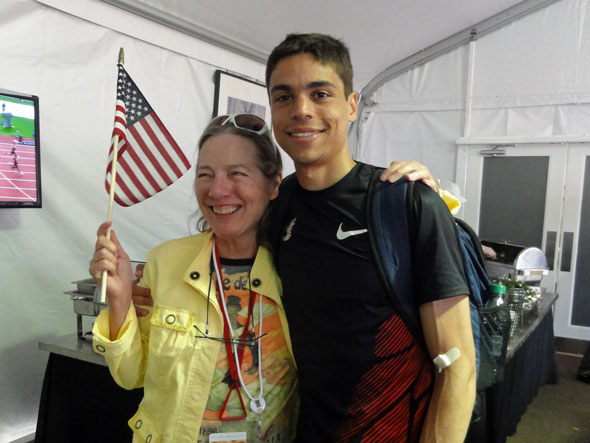 ... including our friend, Jules. Notice the bandage on Matthew's arm? The top three placers in every event have to give blood and urine samples to test for performance-enhancing drugs. 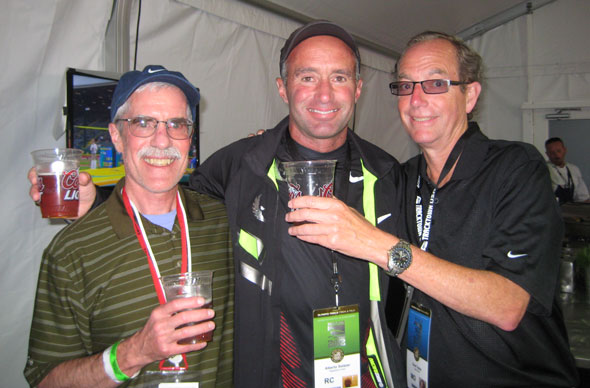 Gary, Alberto & DT
Photo by Jules (Gary is her husband)

Even DT finally relaxed (a bit). Here he is enjoying a frosty beverage with fellow committee member Gary, and Alberto Salazar. Salazar helped train Centrowitz into premier racing shape over the past few months. Alberto and Dave were track and cross-country teammates with Matthew's dad in the 1970's at the University of Oregon.

At 8 o'clock the music stopped, the trials were officially over and all the fans went home. Immediately hundreds of workers descended on the site and began dismantling the temporary facility. 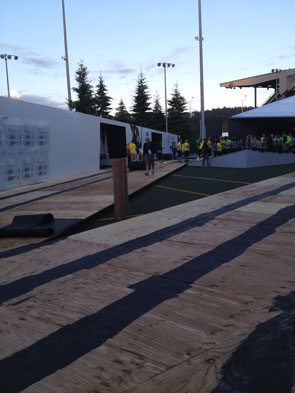 That's about all I can think to write about today. The women's 100m team has yet to be determined. There was a tie for the third spot and the girls are trying to work it out, but it looks as if there will/will not be a run-off as planned. Who knows? At this point, I really don't care - I've about had it with USATF, NBC, the entire confused situation and just want to go home and sleep for a week.

Until my next update, I remain, your track & field correspondent.
« Before the Deluge Some Stuff »