Smoke gets in your eyes

DAY 4 | Track Town USA: Eugene08 has achieved their goal to prepare the US athletes for Beijing - right down to the air quality. We woke very early this morning (6:30a) to a smoky day. Smoke had blown-in overnight from forest fires in California. The Chief of Stuff was quite worried, but the weather is one thing he could not control, fix or change.

DT was over to the track early, but I stayed at the motorhome until noon, when I caught a ride from Mary. Today my vital assistance was required separating concert tickets for distribution to fans. Occasionally I would get a glimpse of DT going in and out of the event office and at two o'clock he was interviewed by Bob Welch.

Mary and I spent several hours this afternoon in front of the pole vault watching Ashton Eaton (and the other decathletes) compete.

Hazy view from Hayward this afternoon 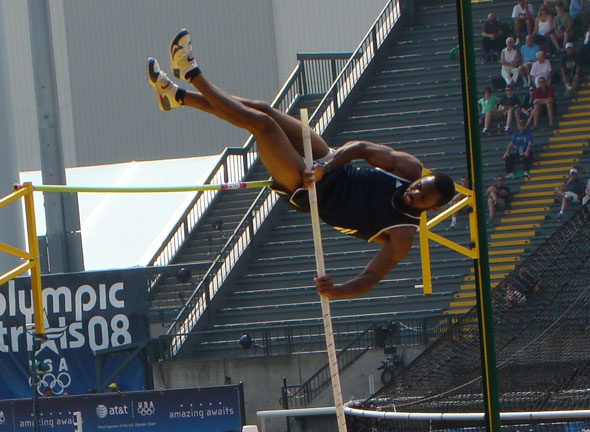 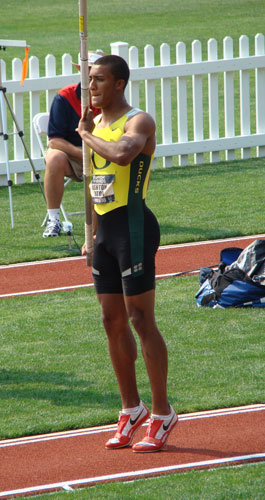 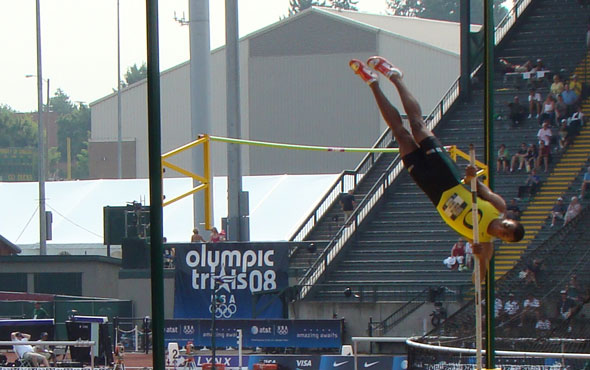 After the pole vault, Mary and I went back to the festival area and enjoyed a late lunch with friends. When the races were ready to start for the evening session, I went with DT to a skybox close to the awards ceremony area - as we would have to report for duty in a bit. 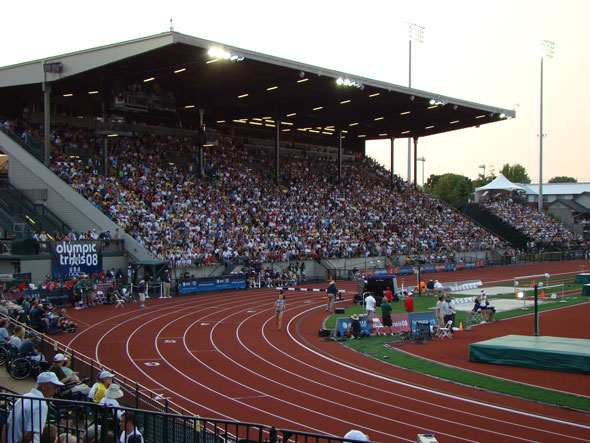 The view from the LOC skybox

Mr. & Mrs. Taylor were at their appointed spot at the appointed time to present the awards for the decathlon. Thank goodness we were too, because we were able to witness one of the most exciting moments in Duck sports history from the track! Our own Andrew Wheating made the 800m US Olympic team! 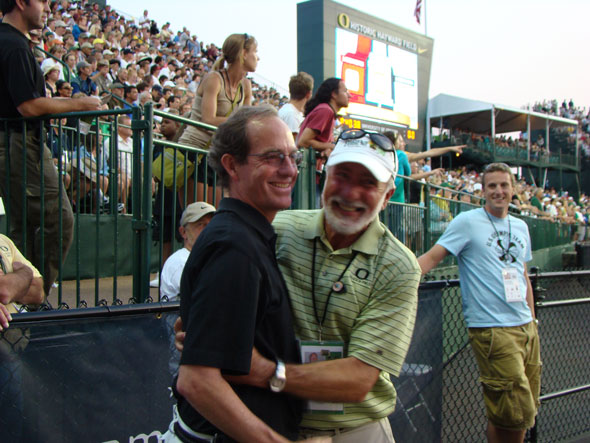 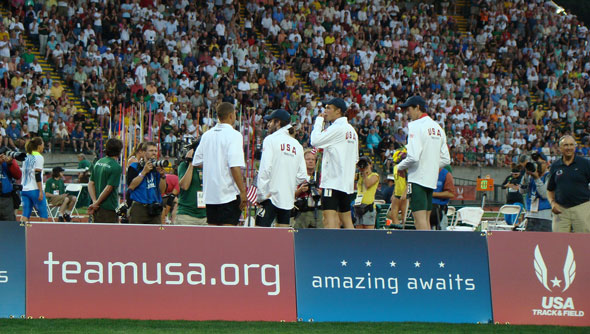 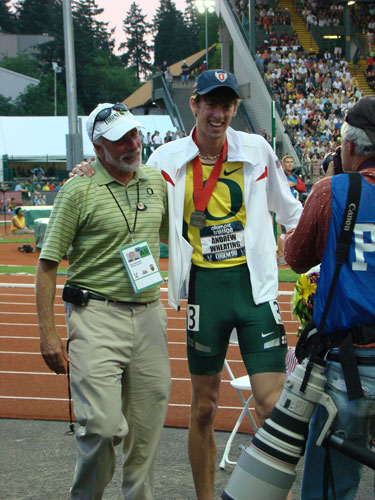 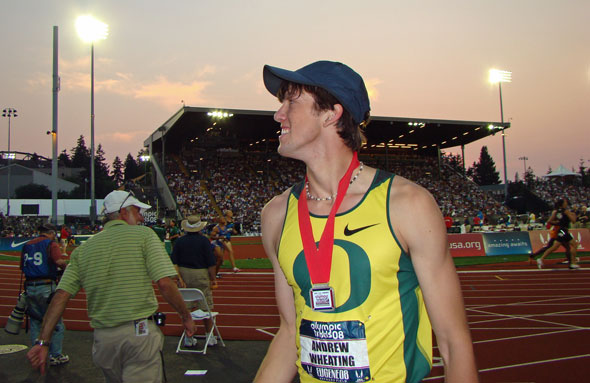 Before we could give a medal to the US Decathlon team - they had to determine a winner. They save the best for last. After spending two days sprinting, jumping, vaulting, hurdling and throwing, the decathletes must run 1500m. I have a suspicion the event schedule may have been thrown-off by a few minutes due to the crowd reaction to Wheating making the team! 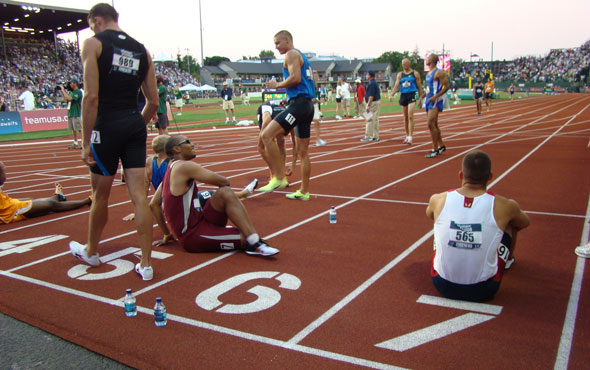 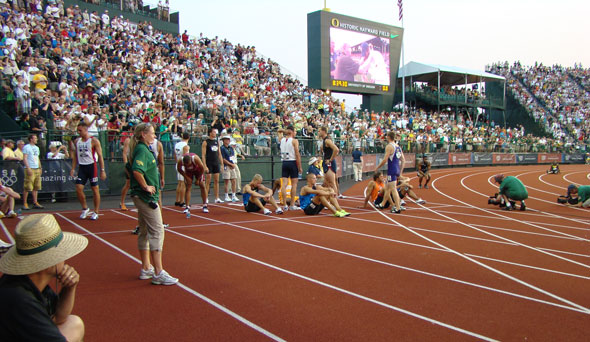 And, so they were off. After hours of competition, the US Decathlon team is Bryan Clay, Trey Hardee and Tom Pappas. No surprises there - a good solid group and reasonable hope that a few of them will be standing on a victory stand in China in a few weeks.

DT and I must have seen thousands of ribbons placed around the necks of champions in our years of attending track meets. Thinking of the happiness welling-up inside the athlete in their moment of victory - knowing they were going to represent their country at the Olympic Games - gave me goose pimples. Never did I consider how happy the medal-giver would be! It was truly magical. Those are some pretty big babies, and they were crying more than me! 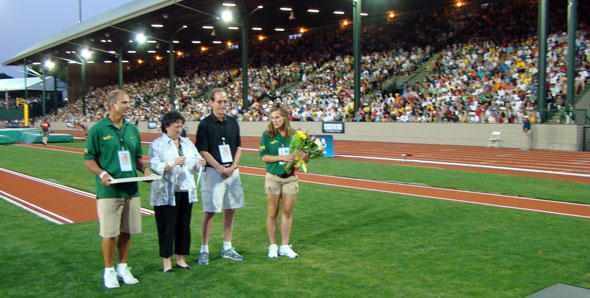 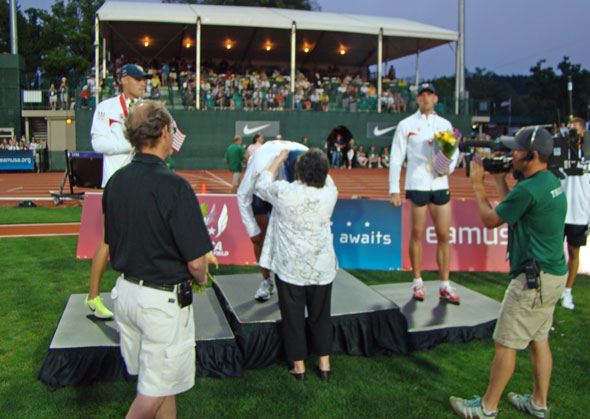 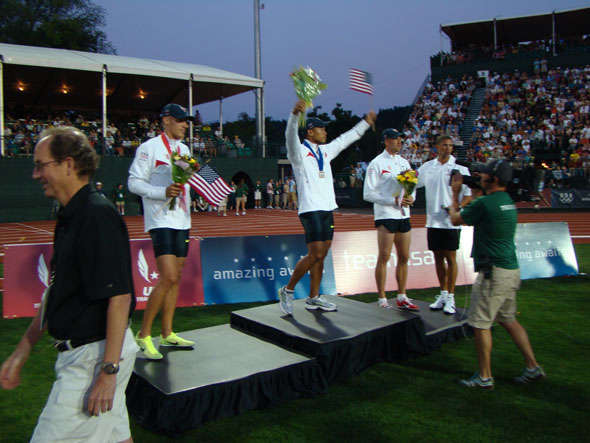 Your US Decathlon Team

Now, that was fun, but DT had bigger things to deal with immediately after the awards ceremony - the men's 5000m final. We went back up to the skybox and DT watched the 5000m with his old teammate, Rudy Chapa. Legat, Tegenkamp and Dobson made the team. What a night. 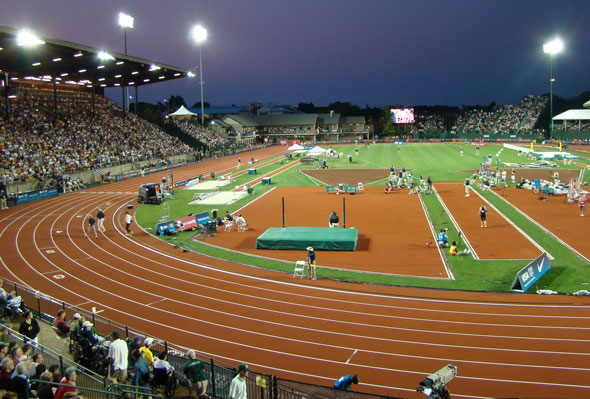 After the races, we went back to the hospitality tent and had a drink several drinks with a huge group of friends. We ended up closing-down the joint with Dustin's parents well after midnight. (Dustin was long-gone.)

Pedometer: My pedometer is missing, but I am sure I walked more than Legat ran. I must have walked back and forth to the track ten times today. There is a two-day rest from athletics - and we will rest too. So, until my next update, I remain, your gold medal correspondent.

« Just a normal day Back to the track »