DAY 3 | Track Town USA: A normal day... if you are attending the Olympic Trials, and if they are being held in Eugene. The day started early for one of us - I don't know if you caught my P.S. from last night, but DT was called in the middle of the night to access storm damage from a wind storm that swept through Hayward Field around 12:30a, so DT is going on about four hours of sleep again. I couldn't figure how this should bother my beauty sleep and asked Mary for a ride into the track at a more decent hour.

We had a wonderful day at the track! More magic at Hayward Field. First, Duck (and Bend, Oregon native) Ashton Easton is in fifth place in the decathlon after the first day. I was able to speak (extremely briefly) to Ashton this afternoon and gave him a word of encouragement! Hope it works. 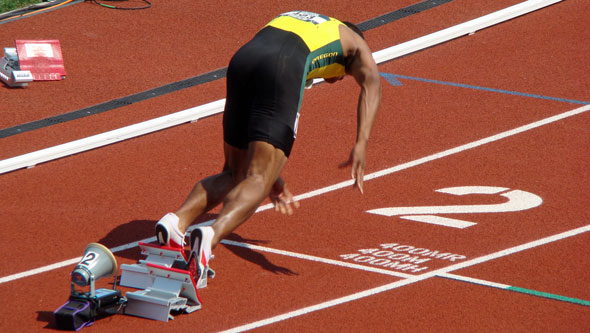 LOCAL BOY DOES GOOD: Ashton Eaton comes out of the blocks in the decathlon 400m

If someone tells you they were at Hayward Field on Sunday, 29 June 2008 you will know their next remark will be something about the moment Tyson Gay didn't break the world record in the 100m. On this day, Tyson Gay ran 100m in 9.68 seconds. No human known has ever covered the distance as fast. However, there was too much tailwind to make the mark stand in the record books. No matter. I was there and I saw it happen. Or not happen. Whatever. 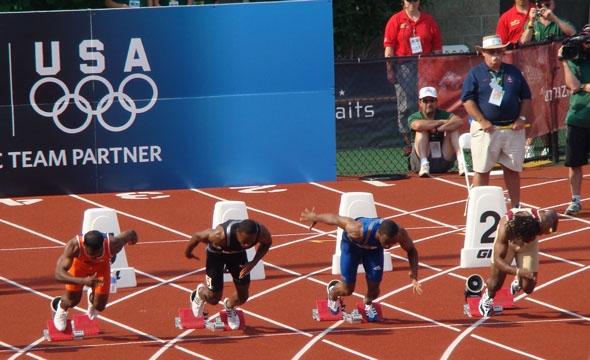 Gay, in lane five - dark blue, jumps out of the blocks. (Photo by Dustin Emrani)

It was unreal. Everyone in the stands knew what we had witnessed. It was NOT a world record because of the wind, but Tyson Gay ran 100m in 9.68 seconds and every athlete with a bag packed for Beijing knows by now. My favorite sprinter from the NCAA's, Walter Dix, was second in 9.8. This is going to be good.

The Chinese had better order up extra chop sticks. These guys are coming to eat.

Our old friend, Bershawn Jackson, won the 400m hurdles and will be flying out to China in a few weeks to represent the USA. It was a great day of track & field... only to be followed by an even better day of track and field tomorrow. Stay tuned. 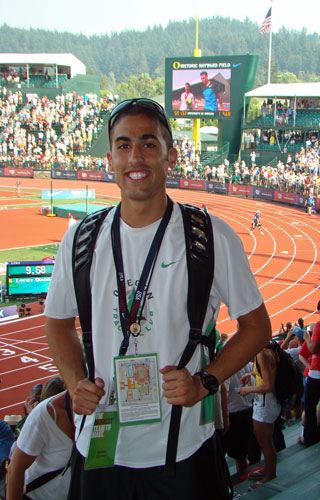 After the end of the track meet - which ended on a hundred-meter high - DT and I attended a University reception near Hayward. Afterward, we met a large contingent at the Rogue Brew Pub for dinner.

Back to the bus for us. A huge hail storm has rolled through the toasty RV park as I type this report. However, the phone did not ring reporting another weather disaster at Hayward Field, so I will close until tomorrow.

Huge day in Taylor Family history tomorrow. At 8:45(ish) p.m. DT and I give the awards to the decathlon champions. Be there. (Ashton: I am talking to you!) Until my next update, I remain your Kobe ball correspondent.

« An electric day Smoke gets in your eyes »