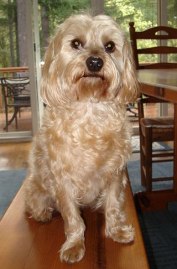 San Francisco, California: First a report on my Grand Dawg, the adorable Reese. He had surgery on his back leg today. The doctor said Reese had a complete tear of his ACL and a partial tear of his medial. Poor baby! Reese now has a nylon support and a metal pin in his knee. He will go home tomorrow morning.

My plans for today were a little easier on the waistline, but a little heavier on the brain - I had tickets to attend two lectures in the Food For Thought Speaker Series portion of Slow Food Nation.

But first - breakfast, the most important meal of the day. So never mind that it was nearly noon... I stopped in again to Kuleto's for my favorite hangar steak before heading over to the Civic Center. 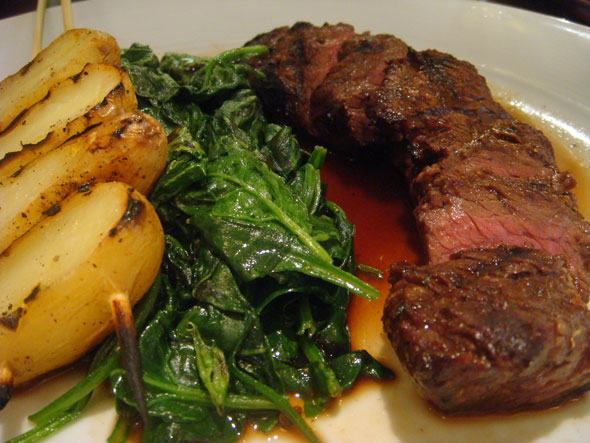 The chef at Kuleto's, Bob Helstrom, is serious about Slow Food too - and procures nearly everything in his restaurant kitchen from local ranchers and farmers. Kuleto's has an entirely organic cocktail menu and offer several organic beers. All kitchen scraps are taken daily to their pork supplier for pig food! I just love that in a restaurant.

After this delicious lunch, I took a taxi to the beautiful Herbst Theater in the San Francisco War Memorial Building, home of the Slow Food Speaker Series. The first forum was moderated by Saveur Magazine editor, James Oseland. The topic was "Re-Localizing Food" and the panel was most interesting and entertaining (and very famous to foodies, by the way):

After 90 minutes of lively discussion and several hilarious stories from Dan Barber, it seems there is a bit of progress in the dream of being able to buy and eat local foods from local growers and ranchers... but it isn't so much because of desire, but economics. Gary Nabhan referred to the change as the "fossilization of food" - we just can no longer afford to purchase broccoli that has been grown with water canaled-in from a distant county and trucked across the country. Pollan feels the energy crisis will restructure the economy. Winona said that is all well and good, but she still wants her coffee (imported form South America) and is willing to trade excess wild rice from her reservation in Minnesota. Yes, this panel was very, very lively and enlightening! (Sorry, no photos were allowed.)

The second panel had the most serious and disturbing topic: the plight of the US farm worker. Moderated by Eric Schlosser, author of Fast Food Nation, the subject was somber and filled with sad statistics. From the millions of farm workers and meat packers, to the 13 million restaurant workers in this country - hardly any of them earn a living wage. The average farm worker earns $11,000 per year. Already this year in California, 6 farm workers have died - most from heat stroke. In this country every year, hundreds of farm workers are literally slaves. These workers do not work on small family farms, but work on multi-national farms with thousands of acres - namely the five largest food producers in America.

The outlook for this problem isn't bright, though the groups mentioned above have been able to free hundreds of workers held as slaves, win compensation for injured workers and have met with fast food chains (McDonalds, Burger King) to have them agree to not purchase from non-compliant farms and are now in serious negotiation with Whole Foods to do the same. Immigration issues also need to be addressed - 80% of America's farm workers and meat packers are recent Latin immigrants and up to half are undocumented.

Okay, the first lecture was a complete happy and positive talk and the second was a total bummer. Both subjects are equally important.

Now for the dinner portion of our evening.

Tonight I had reservations to attend a benefit for Marin Organics at the Foreign Cinema in the Mission District to watch the debut of the documentary film, Hidden Bounty of Marin: Farm Families in Transition. The film details nine ranchers and farmers in Marin County and how they are adapting their ranches and dairies to fill the growing market for organic and sustainably-raised meats, milk and produce. Several of the featured families were in attendance, so that was a treat. Also, I ran into several people from my UC-Davis trip yesterday, so had a group of friends to join!

Free cocktails were flowing. Foreign Cinema was serving only two drinks - both organic vodka-based cocktails. One was cucumbery with a cherry tomato garnish, and the other was strawberry and basil. I know they sound strange... but they were certainly disappearing quickly! 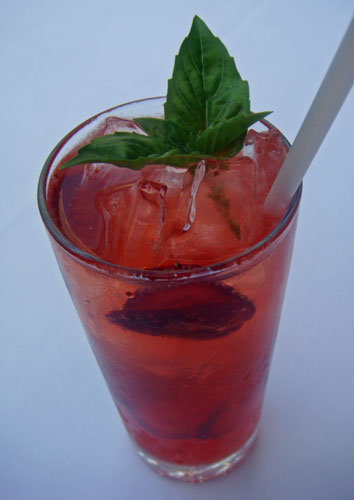 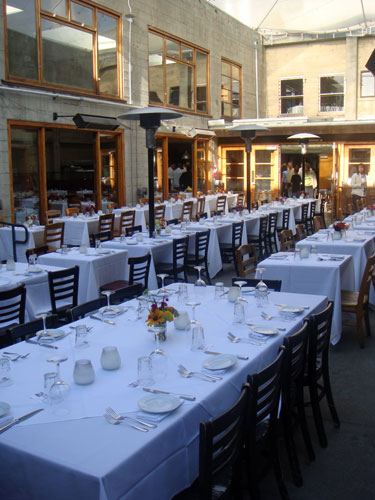 Tomorrow is a HUGE day and I will be able to snap photos like mad, so be sure to check back! Until my next update, I remain, your "I didn't stay for dinner" correspondent.