San Francisco, California: There is quite a lot to report after a very full day (and a very full tummy) - plus many photos to post. Grab a bottle of Rolaids and sit yourself down. 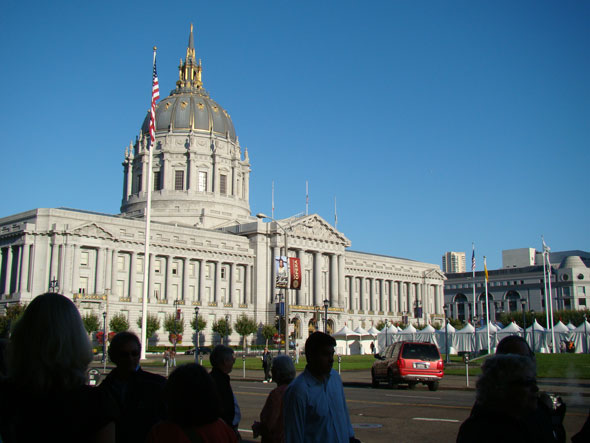 My day started (way too) early, as I had to join a bus tour departing the San Francisco Civic Center at 7:45. And I correct myself - it was not on a tour, it was a "Slow Journey" to the (not yet opened) Robert Mondavi Institute for Wine and Food Scienceat the University of California-Davis. The Mondavi Institute will be the new home of the  UC-Davis Department of Food Science and Technology. After a 75 minute drive from San Francisco to Davis, we (50 of us) were greeted by the RMI director, Clare Hasler and given a tour of the construction site. Grand Opening is October 10, so things are nearing completion. 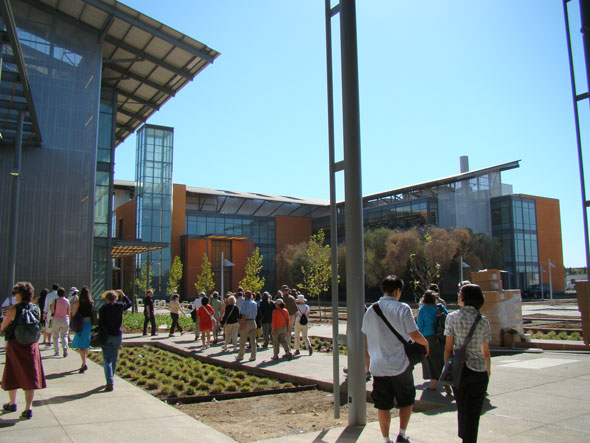 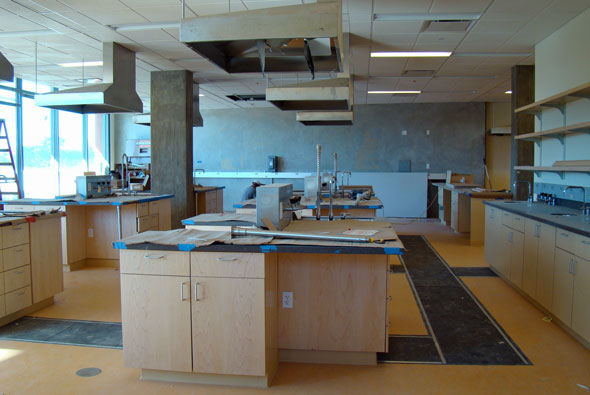 The completed center will eventually have five buildings facing a common courtyard planted with edible plants and fruit-bearing trees. One of the buildings will be devoted to brewing beer. (Man, where was this major when I went to college?) Final cost will be around $111 million dollars. Mondavi donated $25 million and Anheuser-Busch gave five million. The State of California and other private donations are making up the rest. The Mondavi Center works closely with COPIA and the Culinary Institute of America and is proud to graduate some of the best wine and beer makers in the country. And this is just the beginning. UC-Davis is also planning to build a huge hotel and conference center across the road - take that, Eugene! 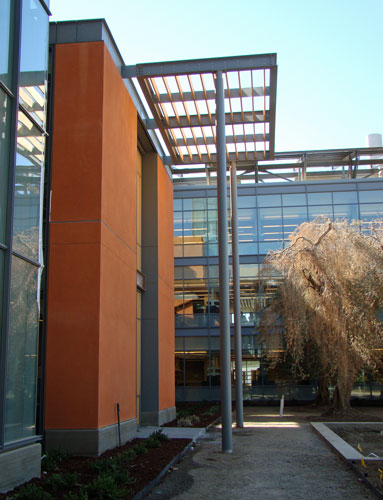 The groundskeepers at UC-Davis had a big problem. Every year thousands of ripe olives dropped from the hundreds of olive trees on campus, students stepped on the slippery olives, fell and were injured. The olive oil business was starting to have a resurgence in the local area, so in 2003 UC-David decided to harvest the campus olives and press the fruit for oil. The school is now helping the California Olive Oil mini-industry grow and flourish. This year, five million gallons of olive oil will be produced in California. Five million gallons sounds like a lot, but it isn't even 1% of what is produced in the world annually. Since UC-Davis has world-renown olive oil guru Paul Vossen on staff - how about a little olive oil tasting? 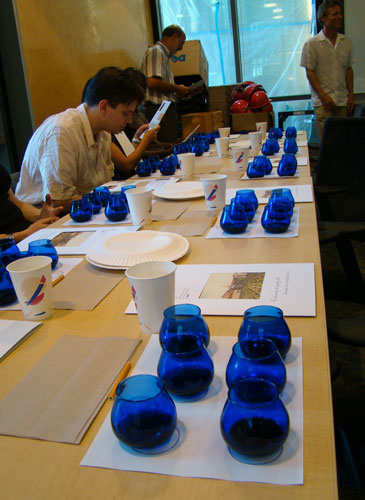 Wine tasting? Cheese tasting? Boring! Give me an olive oil tasting - otherwise known as a "sensory evaluation". Paul Vossen went through a slide presentation, pausing occasionally for us to test a new variety. We saw the entire pressing process and learned what to look (smell and taste) for when selecting an olive oil for our own kitchens. We sampled five California oils, each from different varieties of olive and one typical supermarket variety. No comparison - the fresh, local stuff easily won. (You can see Vossen's slide show here.) 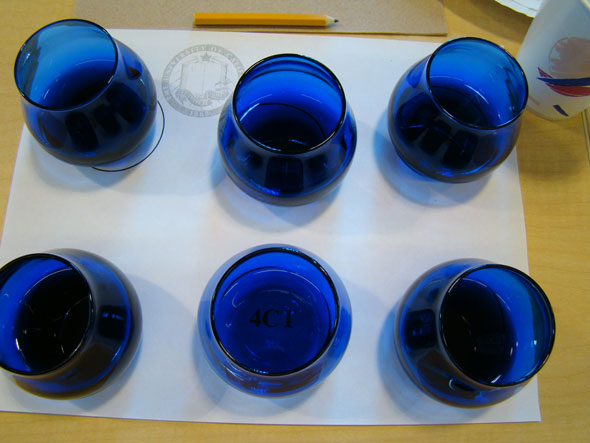 We each had six cups of oil to sample. The oil is placed in blue cups for a tasting,
so we couldn't see the differences in color and body of the oil before tasting.

Time for lunch! Everybody back on the bus! We were heading to the historic Wolfskill Ranch in nearby Winters, California. Once a huge ranch owned by the Wolfskill family, the property has since been deeded to UC-Davis and it houses the National Clonal Germplasm Repository for Fruit & Nut Crops - basically a museum, collection and storage facility for every variety of fruit and nut in California. (Just in case something happens, the seeds and DNA are here.)

We were greeted by staffers, and Dr. Malli Aradhya gave a short talk about the purpose of the Repository (and the other 31 similar facilities across the country). Next, we had a fig tasting. The figs are grown on the UC-Davis Wolfskill Ranch. 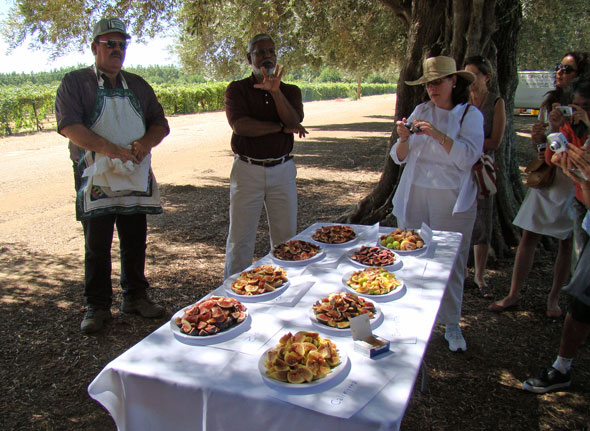 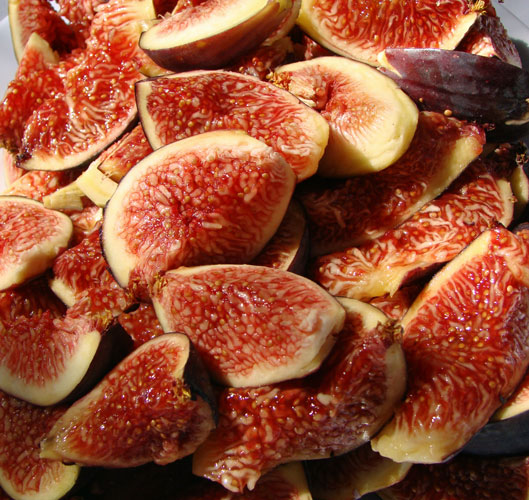 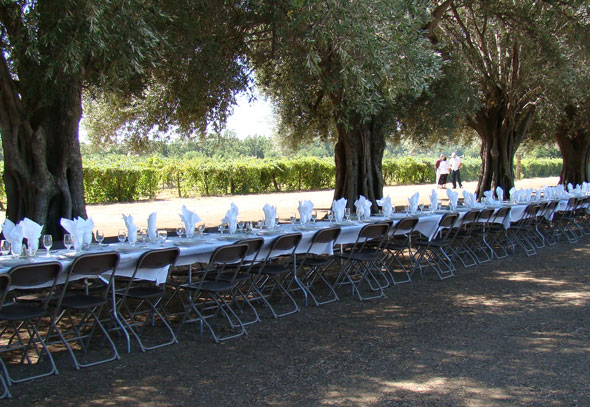 Isn't that pretty? Well, it did look pretty... but it was 105° and the table is setting on dusty dirt.
Oh, and there were about a million flies. These things were over-looked once lunch began... 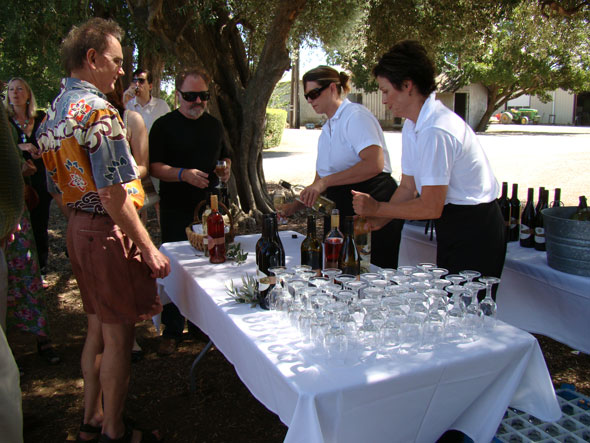 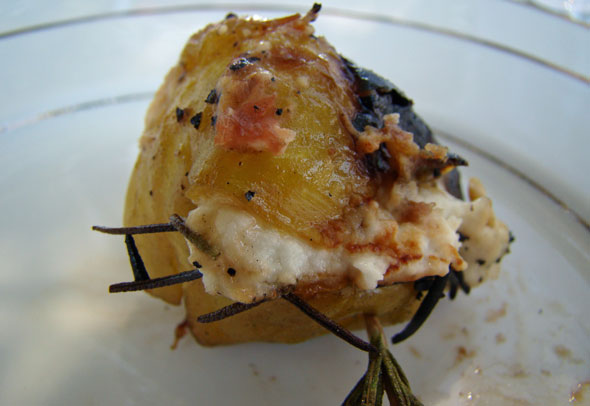 How about a fig appetizer? Figs, stuffed with goat cheese and grilled with a rosemary skewer.
(Most of the figs were also wrapped in a piece of prosciutto... but this is a porkless website.) 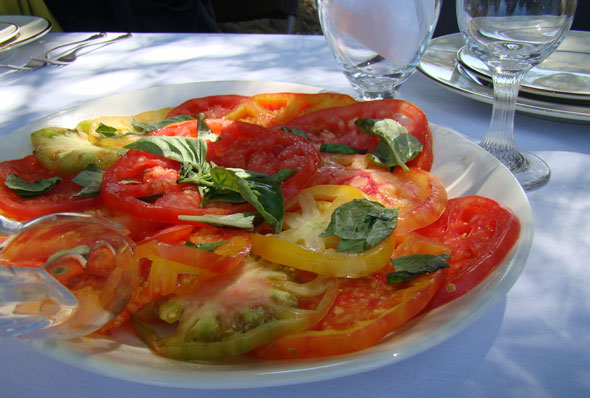 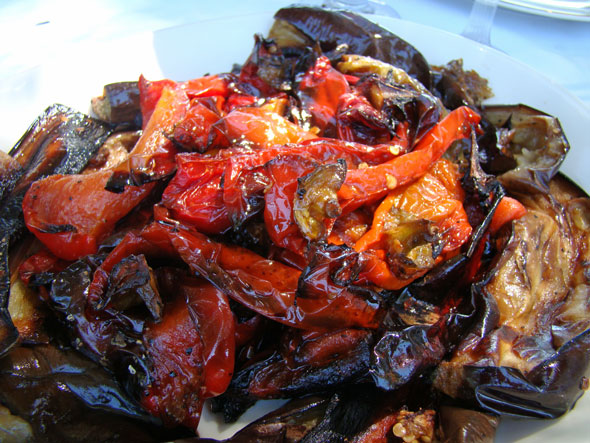 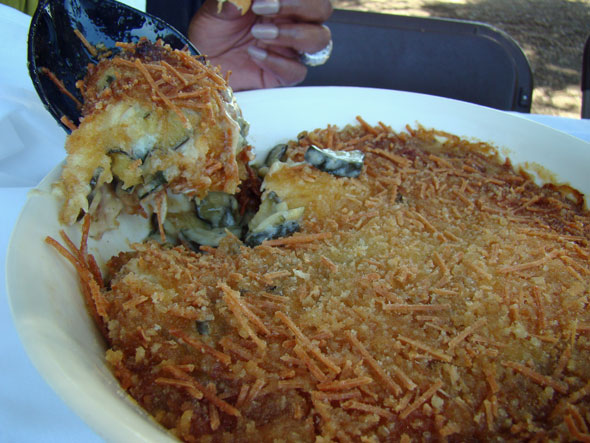 How about a little sinfully rich and yummy zucchini gratin? 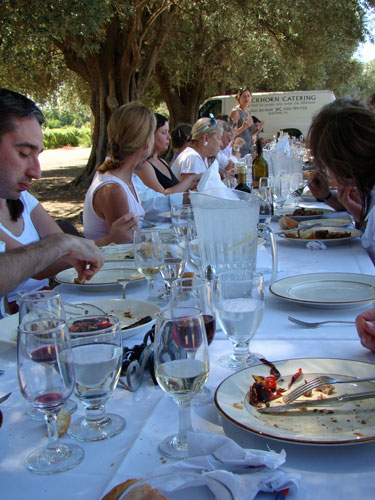 I did not get a photo of the lamb loin! Wow, was it delicious too... oh, and a little stone fruit (and fig) tart. After lunch, we all lazed in the shade, discussing our wonderful meal and rubbing our tummies like Happy Foodie Buddha's, then rode went back to the San Francisco Civic Center.

I really, really enjoyed this tour, led by Georgeanne Brennan and Ann M. Evans, co-leaders of the Slow Food Yolo County chapter. Fun to get a sneak-peak of the Mondavi Center and the professors were simply outstanding and so interesting. We are so lucky to have people so passionate about raising and protecting plant species! Being able to enjoy a meal under olive trees in a vineyard, where everything on the menu came from within a few miles was an unforgettable experience. The people on the tour were from all over the world - and since we all had one thing in common, conversation flowed as freely as the rosé wine! Fun, fun, fun!

After a shower and a nap, I took a taxi down to the waterfront area to join the Slow Dinner at Mexico DF. From the menu - it was too dark in the restaurant for photographs (sorry):

Collaborating as a fundraiser for American Grassfed Association. AGA is a non-profit organization formed to promote and support American Family Grassfed Producers of all species. Come and taste the wonderful cuisine by the Chefs from Mexico DF - Wines hand picked by the Mexico DF staff and grass-fed products from around the Country.

Amuse - Chilled Summer Squash Soup Shot with Fielder Family Farms Heritage Large Black Hog Cured Bacon (Rome, Indiana) paired with Cava, Raventos (Penedes, Spain) (NOTE: I did not try this soup, but it was adorably served in a tall shot glass with the bacon twisted to resemble a straw. Some one at my table devoured it for me.)

First Course - Corn Tamalitos with Huitlacoche and Heirloom Tomato Sauce paired with ‘05 Capitan Zita, Flor de Guadalupe (Baja California, Mexico) (NOTE: Wow. The tamales were divine - with a nice, strong corn flavor. Huitlacoche is a fungus that grows on corn. Sometimes it is referred to as "Mexico's truffle" as the flavor is a deep and smoky and huitlacoche is used similar to a truffle.)

Fourth Course - American Grassfed Beef (Doniphan, Missouri) ‘Birria’ Stew with Rancho Gordo Heirloom Beans paired with ‘05 Estate Petite Syrah, Bodegas Aguirre (Livermore, California) (NOTE: By now, I can barely lift the fork to my lips. My table-mates promise to get me back to my hotel if I suddenly explode.)

OK. It was a lot of courses, but every item came on a teeny little plate - it was a tasting dinner. The chef visited each (communal) table and introduced the owners of American Grassfed Beef, who had donated beef for the fund-raiser and had flown in from Missouri for the event tonight. Each dish, and paired wine/liquor, was explained as it was served. The price for the complete feast was only $85. A very good price for such a wonderful meal.

A great day in the Slow Food Nation.

Until my next update, I remain, your tasteful correspondent.