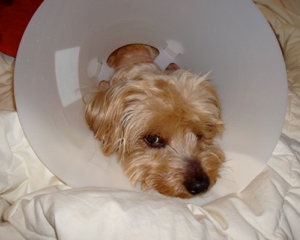 San Francisco, California: First, the latest on our Grand Dawg, Reese. He is home from the hospital and must have complete rest and restricted movement. This will be difficult for this bouncy guy, but I suspect (from the look on his face in this photo) he isn't feeling very good.

A slight change in the weather overnight - fog rolled-in (imagine that, in San Francisco?) and it was decidedly cooler today. The dampness lifted in the middle of the day, but returned late in the afternoon.San Francisco, California: First, the latest on our Grand Dawg, Reese. He is home from the hospital and must have complete rest and restricted movement. This will be difficult for this bouncy guy, but I suspect (from the look on his face in this photo) he isn't feeling very good.

A slight change in the weather overnight - fog rolled-in (imagine that, in San Francisco?) and it was decidedly cooler today. The dampness lifted in the middle of the day, but returned late in the afternoon. 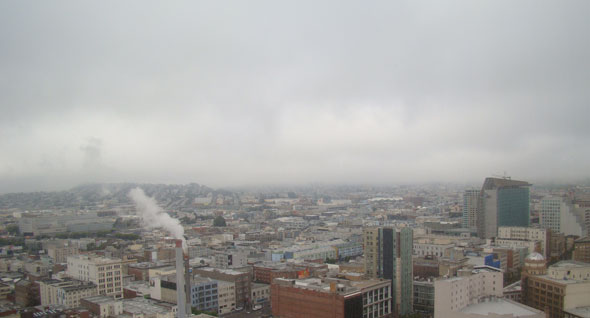 Today's Slow Food adventure was a visit to the Slow Food Taste Pavilion at Fort Mason on the waterfront in San Francisco. The covered pavilion was divided into distinct areas - cheese, wine, coffee, fish, meats, breads, ice cream, tea, spirits, olive oil, pickles, jams, etc. Of course, every plate, spoon, fork, cup and glass used was 100% compostable and made of corn or potato. The ticket price was $65, but everything inside was free and servings were more than generous. As a matter of fact, I had to ask for smaller portions or I would have never made it through the entire building! In the end, I couldn't make it through anyway - too crowded and the lines were completely unmanageable. People were complaining, and I don't blame them. I later learned 8000 tickets per day were sold. Too many people! 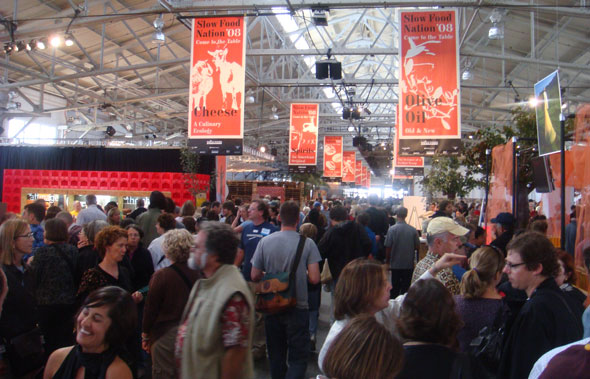 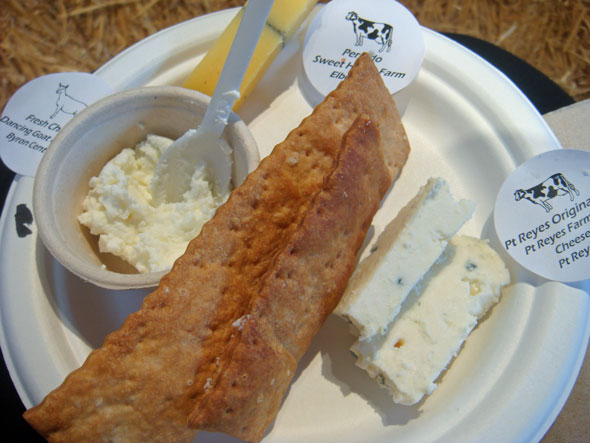 Today the cheese flight consisted of fresh goat cheese from Dancing Goat Creamery, Elberta from Sweet Home Farm and blue cheese from Pt. Reyes Farmstead. Goat keeper and cheese maker Barbara Jenness (Sweet Home Farm in Michigan) spoke while we tasters sat on hay bales munching away. Jenness said she gets 17-21 gallons of milk daily from her 21 goats. Each goat is named after a herb! 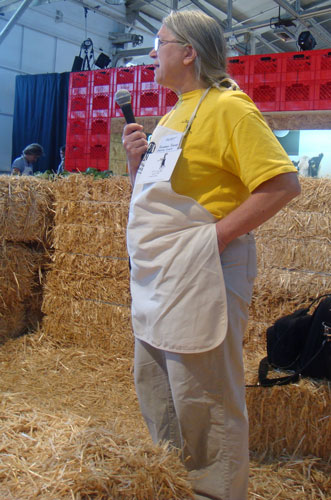 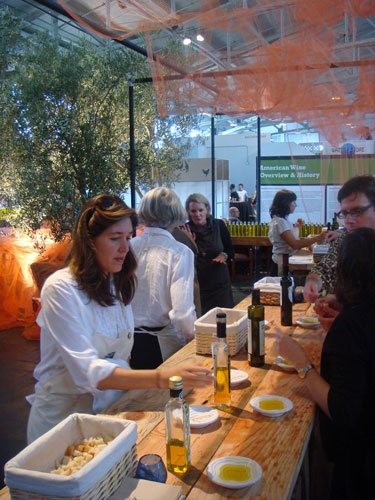 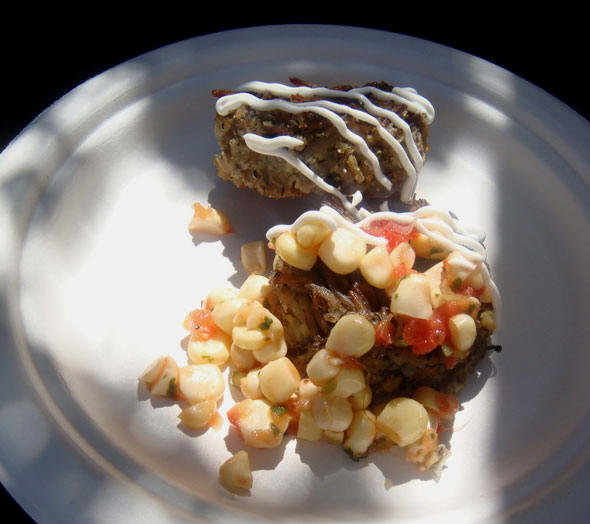 I also tried naan baked in an outdoor oven, served with a fresh tomato dipping sauce and a mint dipping sauce - and I tried a flight of three different ice creams - sweet corn/black raspberry, ginger and crème brule.

The displays inside the pavilion were breathtaking - especially the local fish presented over a bed of ice and kelp - but it was just too crowded to photograph, and impossible to enjoy the festivities and out of the question to speak with any of the busy presenters. Also, it was a bit disappointing that nothing was for sale. You could sample olive oils all day, but if you wanted to buy a bottle to take home, you were out of luck. Order on-line or look for the item in your local shop.

So, I headed up to the Civic Center to explore the Slow Food Marketplace - like a Farmer's Market on steroids - with about twenty slow food restaurant booths thrown-in. This event did not require a ticket - it was free and open to the public. Again, simply over-the-top-can't-move crowds! 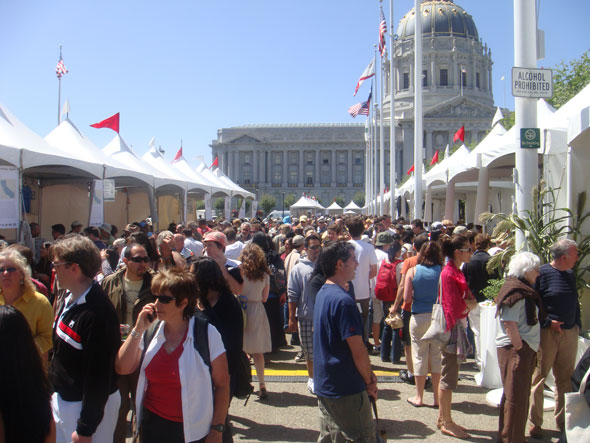 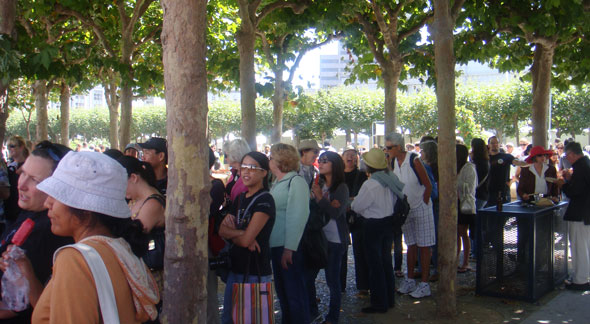 Hungry customers wait in line for a sandwich

And now for the dinner portion of our evening...

Tonight I attended a benefit for the Marin Agricultural Land Trust (MALT) at Greens in Fort Mason. MALT buys easements on agricultural land to keep it in perpetuity as farm land (as opposed to condominiums). Founded in 1980, MALT hopes to keep Marin County farmland as farmland forever. Nearly everything served at the dinner was grown in Marin County - including the wines. 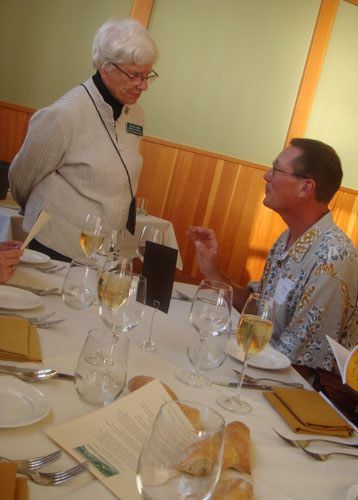 The menu, created by Greens chef, Annie Somerville, was absolutely divine. Usually deriving a menu from items grown in a such a limited area would be a chore... except it is August and the area is Marin County. Ms. Somerville had quite a variety of crops to choose from. The menu: 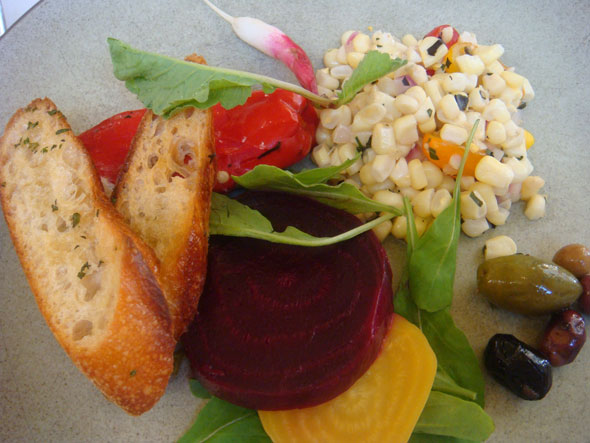 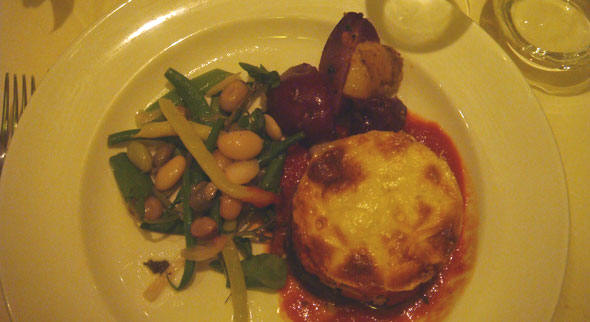 OK. So my spell-checker is having fits and it took an hour to google all those farms... but it was worth the trouble. Fascinating stuff on their websites and I became a bit side-tracked. I am sorry that it just became too dark in the room to take more photographs - especially of the truffles. Notice on the dessert portion of the menu is merely states "with truffles"? Well, let me tell you they placed three platters of truffles on each table! Dozens of truffles. I only had two, but would have been quite happy to have rolled around in them. D I V I N E !!!

During dessert, the MALT staff spoke and then introduced Greens head chef, Annie Somerville. She spoke about developing the menu and how Greens is so lucky to have such an abundance of fabulous growers across the bay. Duh! Next (my favorite part of the evening), Greens first chef, the wonderful and talented Deborah Madison, spoke about how she started in the business. Madison has basically left Greens and now works on her famous cookbooks

Until my next update, I remain, your "eat your vegetables" correspondent.

Continue to the final day of Slow Food Nation